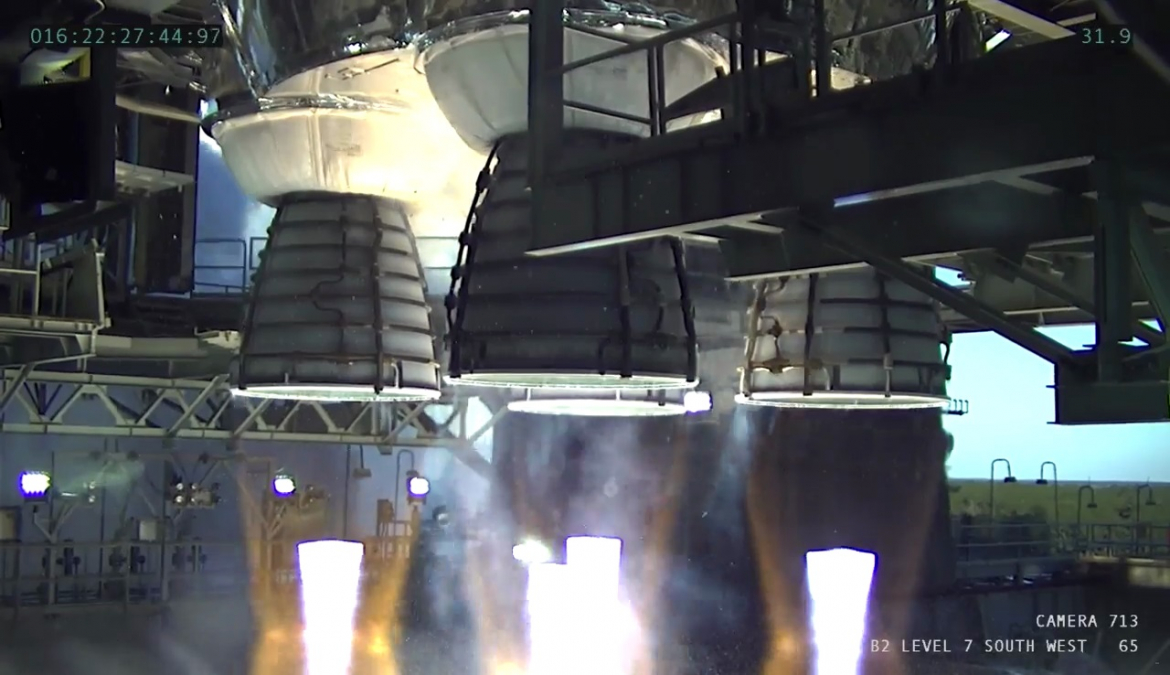 A rocket stage the size of the SLS Core places large demands on Stennis to provide propellants and other services at the rate the stage needs for a full-duration static test firing, including: critical purges before, during, and after the test, high rate industrial water flows to protect both the stage and the stand during engine firing, and hydrogen burn-off igniters (HBOI) to protect against the accumulation and detonation of a hydrogen gas cloud around the bottom of the stage.

Stennis Hot-Fire support not only propellant

The first Core Stage for NASA SLS program is still in the B-2 position of the B Test Stand at Stennis in southern Mississippi as a part of the Green Run design verification campaign that started in January 2020. The B Test Complex is one of the areas used primarily to test single rocket engines, although the B Test Complex supports stage testing in the dual-position stand.

The space center’s High Pressure Gas Facility (HPGF) supports the different test areas and test support facilities at Stennis. “It basically is the heart of the whole test complex. All the gases, everything we need comes through there,” Maury Vander, NASA Stennis Chief of Test Operations, said in a late-February interview.

Gaseous nitrogen (GN2) is one of the critical needs. Before, during, and after hazardous operations, like flowing propellant,  GN2 is used to purge areas of oxygen content in the air to mitigate fire risks. Helium, another vital gas for pressurization, is also produced at the facility also provides other gases.

“Though we’re not using it for Core Stage, we’ve got hydrogen [gas], as well as our air.” The Core Stage forward skirt, intertank, and engine section compartments above and below the propellant tanks are air-conditioned most of the time, and the HPGF provides that humidity and temperature-controlled air purge inside the stage. 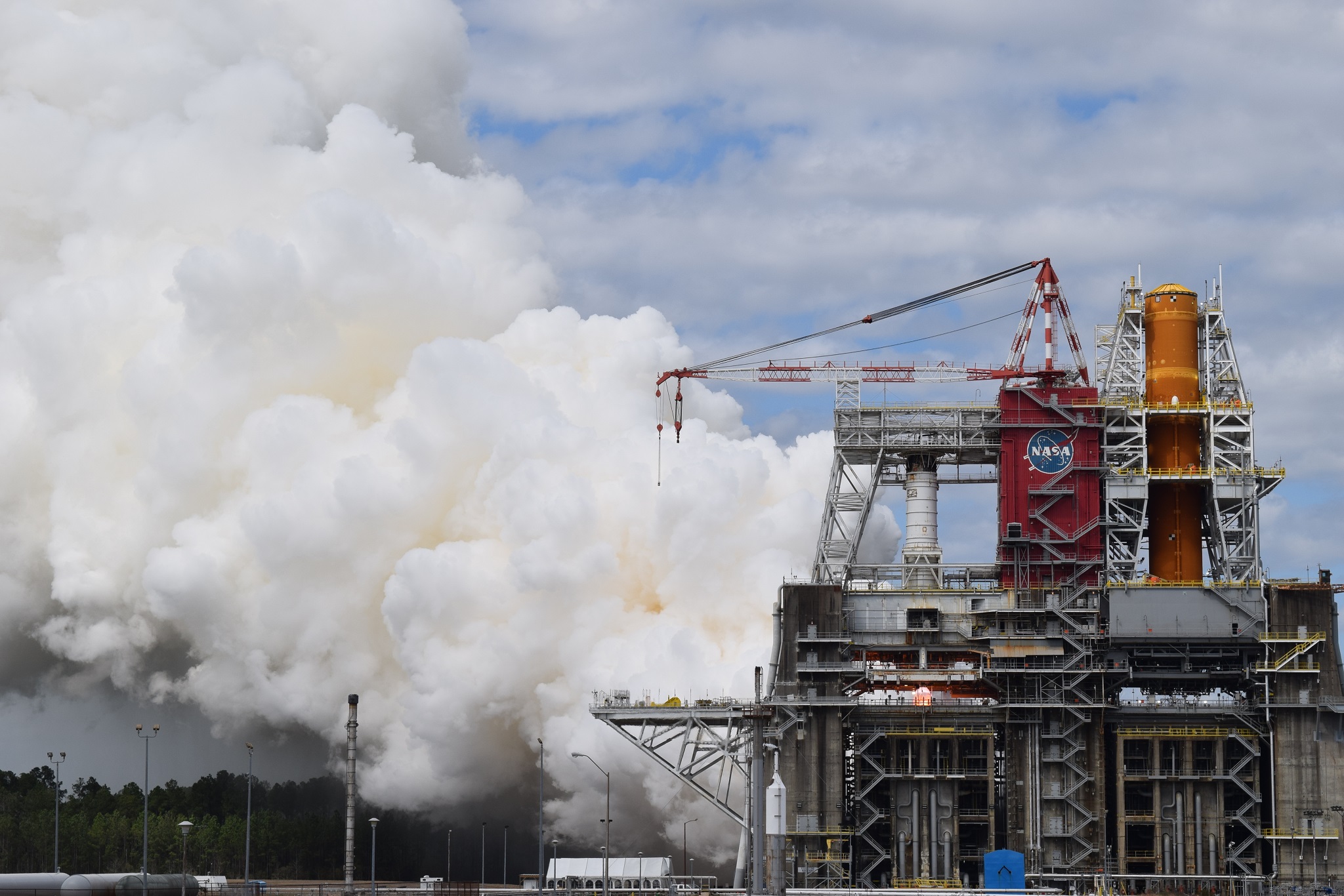 (Photo Caption: The SLS Core Stage witnesses another RS-68A acceptance test at NASA’s Stennis Space Center on March 9, 2021. The single-engine RS-68A tests are conducted in the left-hand B-1 position of the B Test Stand; rocket stage testing is still supported in the right-hand B-2 position of the stand that the SLS Core currently occupies. Aerojet Rocketdyne tests new RS-68A engines after assembly at their Stennis facility prior to installation in a United Launch Alliance Delta IV Common Booster Core.)

One of the preparatory steps before hazardous propellant operations begin is to switch purges in the needed areas from air to gaseous nitrogen, and the Core Stage needs a lot of GN2. The HPGF has vaporizers which convert liquid nitrogen from storage spheres into nitrogen gas; the gas is fed to the B-2 Test Stand where heaters increase the temperature.

During tanking operations, when propellant lines and tanks in the Core Stage are filled or are being filled with the cryogenic liquid, surrounding temperatures inside the compartments can drop down near -18℃/0℉. The heated GN2 purge not only reduces fire risks but helps maintain the temperature and humidity within the required range for avionics and moving parts in places like the engine section.

In order to maintain the conditioned GN2 purge at the flow rate the Core Stage needs, the HPGF nitrogen storage capacity is being augmented from other locations nearby. “That’s another challenge, too,” Vander noted. “We’ve got storage vessels, we’ve got a big sphere here [at the HPGF], and we’ve actually got some supplemental storage that we’ve rented. We call them queen tanks, and there are about five of those that have added about 80,000 gallons of liquid nitrogen capacity to us.”

“So we’ll typically go in [to tanking operations] with all of those full, which is about 240,000 gallons of liquid nitrogen. And we’ll have trucks rotating through here on test day roughly every hour, hour and a half.”

The GN2 purge of the stage starts a couple of hours before tanking begins and runs until well after detanking. “At the end the test, we transition to warm up, inert things; the nitrogen consumption does not really stop until the vehicle is inerted,” Vander explained. “So we’re still pumping nitrogen to the vehicle about four or five hours after the test.”

The countdown for the Green Run hot fire test has begun. Test teams at @NASAStennis have powered up the avionics, the brains of the SLS rocket, within the #Artemis I stage. The @NASAArtemis blog has the latest updates HERE >> https://t.co/zu1CzFnNr6 pic.twitter.com/HiO76LmkBk

The gas facility is over a mile (1.6 km) from the B-2 position of the B Test Stand where the Core Stage is installed, which is outside the danger area should a failure of the stage occur during the test. This allows refueling of the liquid nitrogen storage spheres via tanker truck convoys every hour or so throughout the test day to continue safely while the stage is being fueled or is fully fueled.

Vander also noted additional nitrogen supplies on-site will be used. “We’re also getting some nitrogen supply from our E Complex down Propellant Boulevard,” he said. “We’ve got some ultra-high pressure tanks there that we pump up to about 14,000 psi, and we ease that back into the site as well to try to help make sure we don’t run low.”

Another critical commodity for the test is water. “The high-pressure industrial water plant is inside the A-B test complex, which is where the water is supplied for the flame deflectors and the acoustic noise-reduction and things like that,” Vander said. 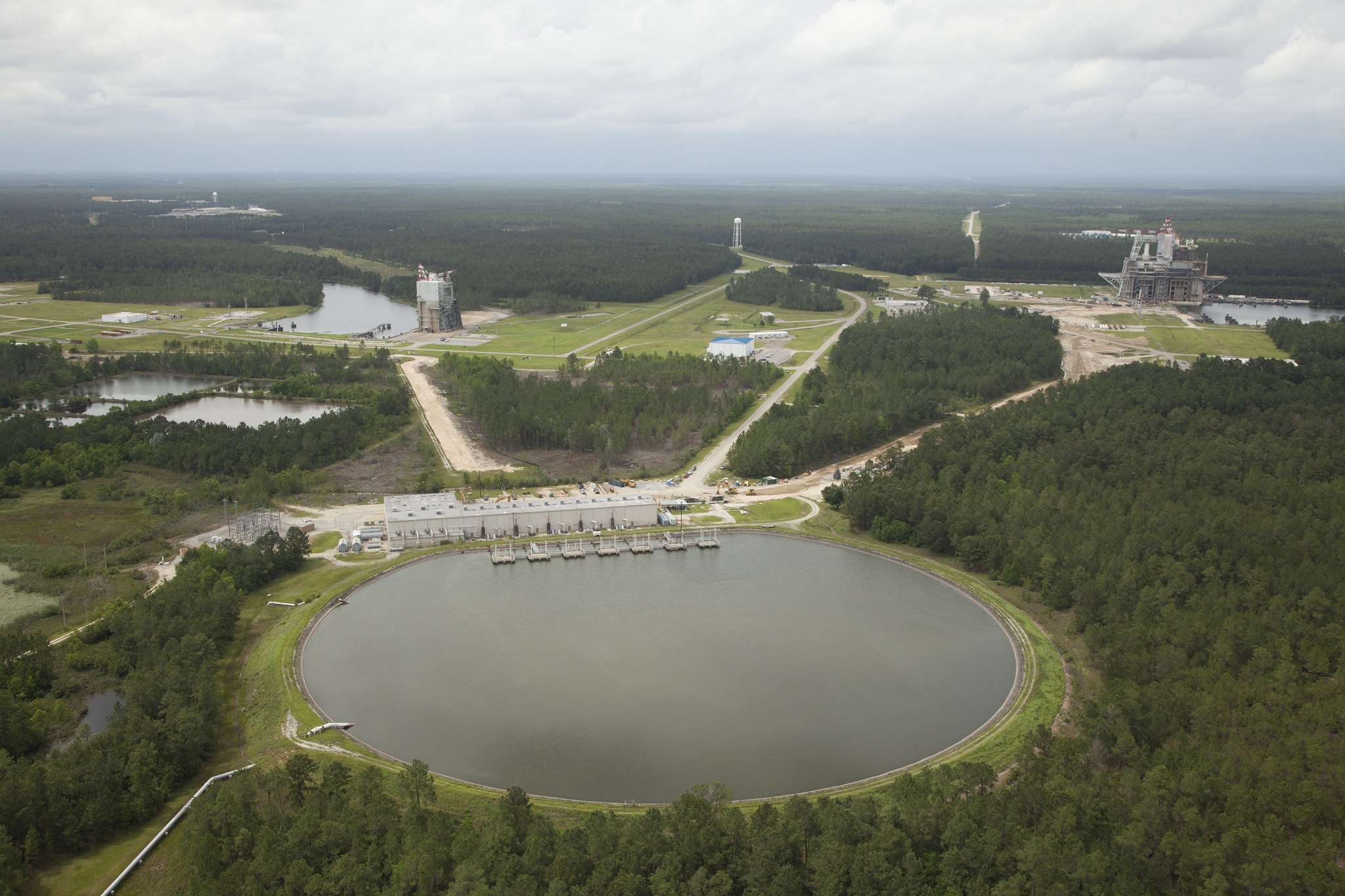 “It’s not fresh water; it’s far from that. It’s kind of brackish, and it’s got fish living in it, things such as that. We have some gross filtration to keep the fish out; we don’t want that kind of stuff going into the pumps that deliver it out [to the test stands].”

A lower flow of water goes into the flame bucket during tanking operations in case cryogenic propellant were to leak. “You have a quiescent flow for hours ahead as you start to fill the vehicle,” Vander explained. “You’re basically trying to prevent any [propellant] spillage that would go into the flame bucket from damaging it.”

“So you’ll turn one of the higher-level water supplies on and basically have that running in case something happens,” Vander explained. As the countdown gets closer to ignition, that flow of water to the flame bucket increases.

The water supply to the aspirator/acoustic ring starts much closer to ignition, but starts with a lower initial flow a few minutes before ignition and then increases to the required high rate for the firing. “You want to make sure that thing is going first of all,” Vander said. “We’ll bring all the stuff up and then we’ll crank up the water to higher pressure. And that’s when you see that increased flow [to the acoustic ring].”

When the Core Stage team is ready to tank the vehicle, the Stennis facility workforce will fill up the barges in a cryogenic storage area away from the stand first. “They are topped off at the storage area and then we disconnect them and travel the canal system to the B Stand where they are connected,” Vander said.

The margins for LH2 are small, and the commodity boils off faster than LOX, so Stennis is overfilling the barges for the SLS Core. “We typically fill them to a hundred percent, [but] the capacities are so close with [Core Stage] that we’re filling to 110% and above on the hydrogen side and a little over a hundred on the oxygen side just to have that additional supply in case we need it,” Vander noted.

“There’s also a replenish tank over at the B Stand as well that holds about 28,000 gallons of liquid oxygen. So in addition to the barges, there’s actually a tank at the base of the B Stand — it’s the tank that we use to do the initial filling and topping once we get full.”

The three LH2 barges were brought over two days before tanking day. “If for some reason there would be a delay, we’d watch those barge levels and make sure they don’t get below a level we didn’t want them. We may need to disconnect one and bring one back,” Vander said.

Of note, a severe weather complex with a risk of high winds, hail, and tornadic activity will move over Stennis and southern Mississippi today (Wednesday), and teams will be monitoring the weather and assessing any impacts it may have to Thursday’s planned Hot-Fire test. 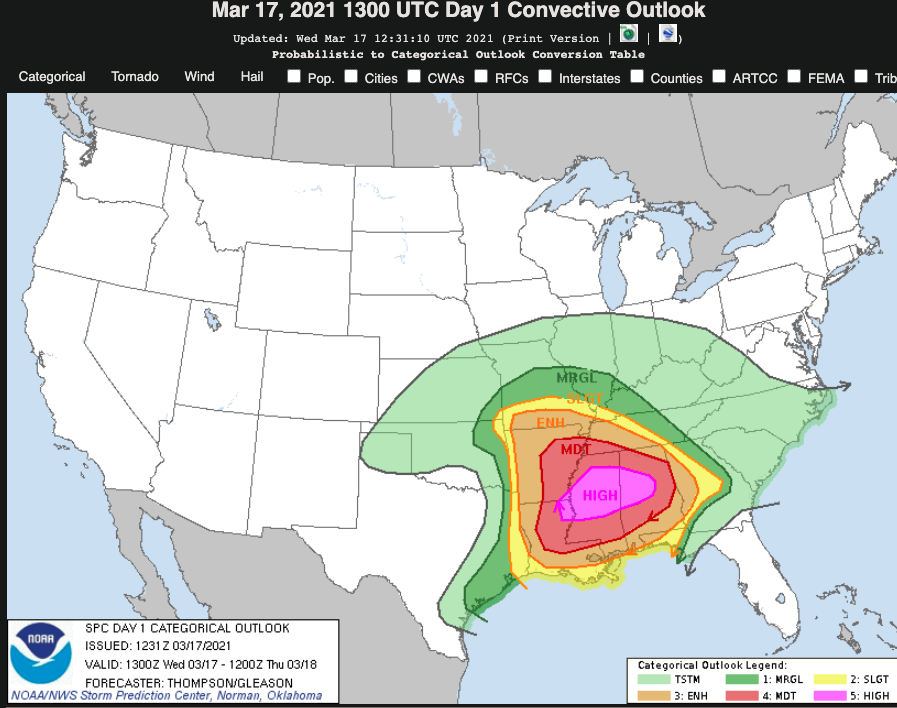 “The liquid oxygen doesn’t boil off as fast, so we can deliver those a little bit earlier, three to four days earlier we’ll get those connected.” The barges are refilled at the cryo storage area by tanker trucks; tanker trucks also service the fixed replenish tank at the stand itself prior to testing.

During the first-ever Core Stage tanking on December 7, 2020, an issue delivering liquid oxygen from the barges within vehicle temperature limits was discovered during the initial part of propellant loading. “We were flowing a [small] quantity of liquid oxygen to begin with, and the pumps we were using were the same pumps that we use during the [fast] fill. So you’re operating at a low level, and the fluid is not really moving. So it has an opportunity to pick up heat,” Vander explained.

Vander noted that the smaller replenish tank on the grounds of the test stand has vacuum-jacketed lines which were better suited for lower flow rates. “[We switched to] using the smaller system that is designed for that flow rate, and it worked tremendously,” he said.

After the early end to the January 16th Hot-Fire test, most of the adjustments were made on the vehicle side; however, one change was made to some of the hydrogen burn-off igniters (HBOI) in the B-2 stand positioned around the outside of the engine section and the RS-25 engines.

(Photo Caption: The hydrogen burn-off igniters in the B-2 Test Stand continue to fire during the Core Stage engine start sequence on January 16. The igniters are fired at T-12 seconds and run several seconds after T0. The four RS-25 engines start one at a time in a staggered sequence beginning at T-6.6 seconds.)

During the engine start and shutdown sequences, groups of hydrogen burn-off igniters are fired make sure that a large amount of hydrogen gas doesn’t build up and then detonate all at once.

The burn-off igniters did their job during the January test, but the group of them covering the exhaust ports of the Core Auxiliary Power Units (CAPU) have been re-aimed lower for the upcoming second test firing.

In the January 16 test, the plastic covering of one of the engine mounted heat shield blankets caught fire for a few seconds. The blankets are multi-layer thermal insulation to protect the inside of the engine section, but they also have a plastic water barrier on the outside to keep moisture out before ignition.