SpaceX, Crew-2 mission cleared for launch as eyes turn to the weather 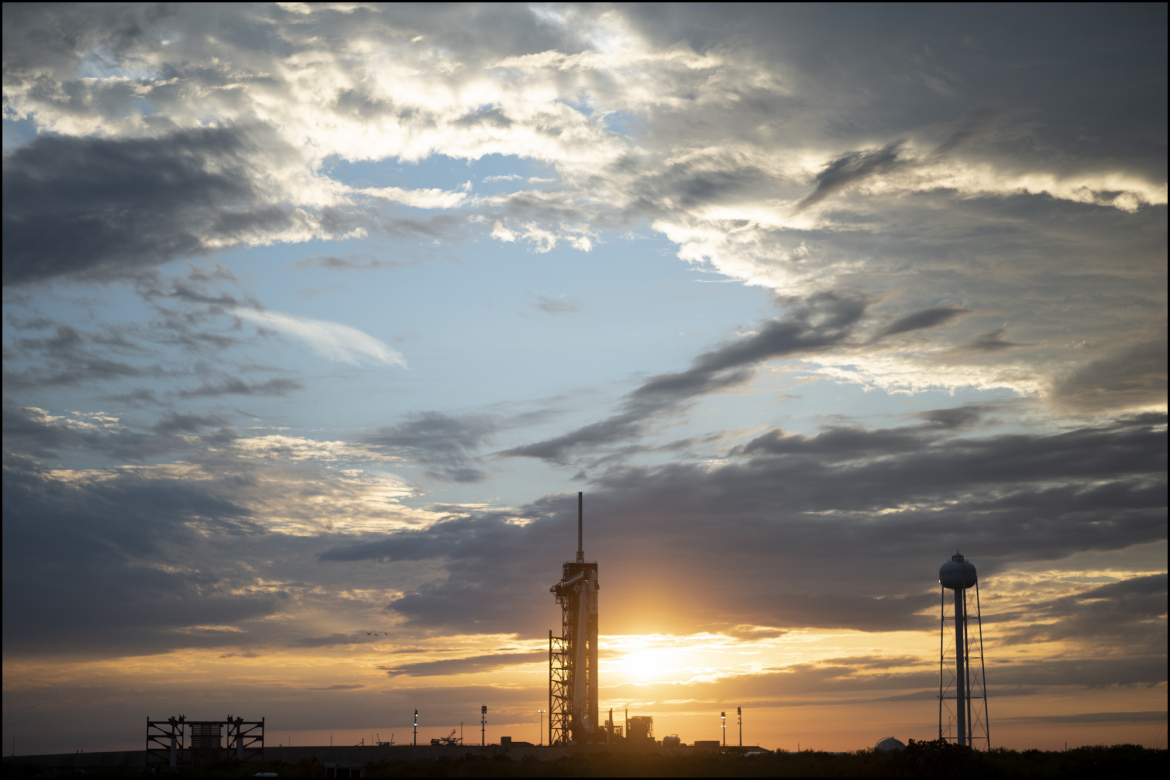 The Crew-2 mission’s Launch Readiness Review, or LRR, has been completed at the Kennedy Space Center, with managers from NASA, SpaceX, the European Space Agency (ESA), and the Japan Aerospace Exploration Agency (JAXA) formally clearing the SpaceX Falcon 9 rocket and the Crew Dragon Endeavour for launch of four international astronauts to the Space Station on Thursday morning at 06:11 EDT / 10:11 UTC.

Clearance for launch comes as eyes now turn to the weather not just around Florida but along Falcon 9’s ascent corridor over the Atlantic Ocean — where wave heights and maritime weather will play a factor in determining if the Crew-2 mission can launch on Thursday as planned or if it will need to wait one extra day.

After last week’s Flight Readiness Review, or FRR, SpaceX successfully conducted an investigation into the single open item stemming from the review, and performed a static fire of the Falcon 9 rocket and dry dress rehearsal with the four humans who will ride inside the Crew Dragon Endeavour for a six-month stay aboard the International Space Station (ISS).

The remaining opening item from the FRR centered on a discovery in McGregor, Texas, on a yet-to-fly Falcon 9 first stage.  When testing was interrupted by weather in the area, teams noticed that the liquid oxygen (LOX) tank had more LOX in it than expected.

Subsequent testing revealed this situation has been present on all Falcon 9 first stages and has successfully flown with each of them.  Still, out of an abundance of caution, especially given this mission is carrying humans, additional analysis and work was performed by both the SpaceX and NASA teams to clear the issue for flight.

Speaking at the post-LRR news conference on Tuesday morning, Steve Stich, Manager of NASA’s Commercial Crew Program, said, “The additional liquid oxygen that we thought was on the vehicle… we looked at that relative to this flight, and we concluded that that amount of liquid oxygen in the first stage was well within family of the Guidance, Navigation & Control analysis and the performance analysis, well within the loads and structural capability of the vehicle, and [within what] we could handle [from a] contingencies [standpoint] with that LOX onboard.” 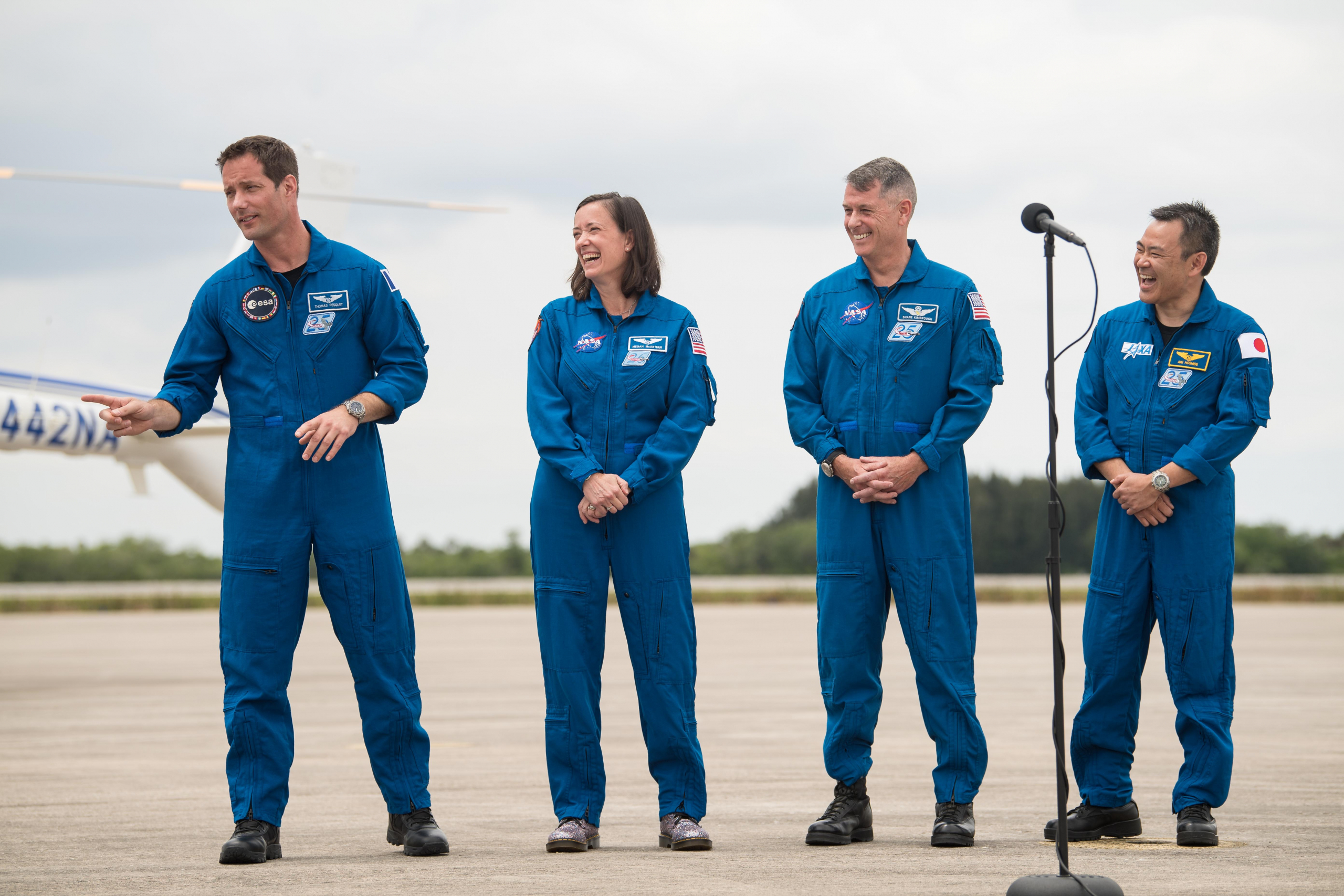 “So we were go to proceed.  We had an exception at the Flight Readiness Review, and we closed that.”

Echoing that, Benji Reed, Sr. Director, Human Spaceflight Operations, SpaceX, conferred, “We continue to do a number of tests, thousands and thousands of tests to get to the day.  We talk a lot about the types of reviews that we do, we call them paranoia reviews.  Because we want to be paranoid.”

“We want to make sure we’re going to fly these people safely and be able to bring them home safely.  We check under every rock, we double-check and triple-check and question each other and we challenge each other every time.  And we’re continuing that process.”

“We’ve got Megan and Shane and Aki and Thomas.  There are a lot of families there.  A lot of time and hard work that they put in, not just the astronauts, but their families and everyone who supported them over the years so they can go up and do their jobs on Station and deliver the great science the Station does.”

“But in particular in my heart,” Benji continued, “there’s a little boy whose mom is flying.  And this is something that we pay a lot of attention to.  We ask ourselves all the time ‘would we fly our families?’  And that’s kind of a test for us.”

It might all come down to the abort weather…

Part of protecting Shane, Megan, Thomas, and Aki is the SuperDraco abort system on Crew Dragon, which will be standing by to pull the capsule and its four occupants safely away from the Falcon 9 in the unlikely event of a fueling or launch mishap.

From the moment the abort system is armed approximately 42 minutes prior to liftoff, the SuperDraco engines can pull the capsule away from the rocket and then, depending where in the timeline the abort occurs, switch over to the regular Draco thruster system for in-air maneuvers to ensure proper attitude control as well as a correct trajectory toward the abort landing zone.

It is this downrange weather along the Eastern seaboard of the United States and stretching out across the North Atlantic to the western coast of Ireland that causes the principle concern for launch day.

Importantly, no one has ruled out a Thursday liftoff, but officials have noted that as of Tuesday midday Eastern time in the US, Friday was slightly more favorable for abort weather than Thursday — though that should not be read as a negative comment for Thursday’s attempt.

“We do have teams that are tracking the downrange weather,” said 45th Weather Officer Brian Cizek in an interview with NASASpaceflight.  “With NASA and SpaceX, especially for a crew launch, they’re monitoring the winds and waves along that ascent corridor.  But we have teams that are in communication with them on that, and we’re kind of advising on what we’re seeing, but they have the tools that are looking at those factors as well.”

While NASA and SpaceX will handle decisions regarding weather elements in the farther downrange abort landing zones, the 45th — known widely for the Kennedy/Cape Canaveral-specific weather duties of the actual liftoff — does have a larger role should a pad or early-in-flight abort occur, which would see Dragon splashdown just off the Florida coast. 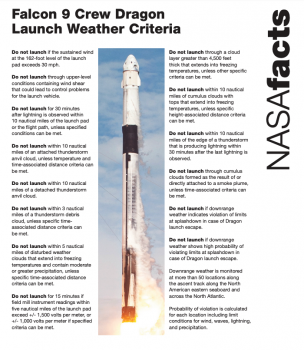 “For crewed launches, we actually have a separate team that’s just dedicated to [abort recovery], and it’s called the joint METOC team, and that’s what they’re in place for,” related Cizek.  In that case, the 45th would coordinate weather advisories and warning as well as situational weather awareness to Search And Recovery (SAR) teams that would be dispatched by air and sea to assist the crew with egress from the Crew Dragon, transportation of the crew back to the Cape/Kennedy area, and recovery of the Crew Dragon capsule.

But while the 45th’s operations are more extensive, their primary duty is ensuring the safe completion of a pre-launch count activities and the physical liftoff and early ascent of the vehicle from a weather perspective.

And for Thursday and Friday this week, the local weather at Kennedy is looking quite good for launch — despite the rain-soaked start to the week.

“The weather this time of year can be a bit challenging because it is the transition time,” noted Cizek to NASASpaceflight.  “We call it the transition season where we transition from the dry season to the wet season.  So really, depending on the setup, you can get some aspects of both.”

“The weather that we’re going to see by the end of this week, once we get the front to pass to our south and high pressure building in, will be more reminiscent of the dry season pattern.”

Specifically, a frontal system draped across the Florida peninsula is currently delivering a significant amount of needed rain to the area.  The front is expected to be pushed to the south of the local area by an advancing high pressure system, currently located over Montana but which will move southeast to the Missouri and Arkansas region by early Thursday morning.

This movement of the two systems will help dry out the area around the Kennedy Space Center.  That’s the good news.

However, the advancing high pressure center along with the moving frontal system and a low pressure center in the Atlantic will create a pressure gradient which will increase the ground wind potential across the area on Thursday morning, with winds expected to be between 27 and 35 km/hr from the north-northeast at the time of the single-second launch window.

Those winds would be within limits of the Falcon 9 system, and there is only a 20% chance of winds violating launch constraints on Thursday – with that being the only weather concern for the Kennedy Space Center area that day.

As the weather systems continue to move around each other and the high pressure center slides further to the east, the main concern from Thursday to Friday shifts from the winds to a slight chance for a rain shower in the vicinity of the pad or along the flight path.

“That high will slide farther to the east [on Friday],” said Cizek.  “It will still be centered north of us, but the high itself will be farther east and a little bit closer, so we’ll see the winds shift to a more easterly direction.  When you have that onshore, easterly flow, you can’t rule out some low topped, weak showers.  But the air looks really dry, especially in the mid and upper levels, so it’s a very low threat on Friday.”

As with all launch campaigns, weather balloons will be released numerous times during the count, with upper level wind data fed directly to SpaceX controllers in the firing room at the Launch Control Center adjacent to the iconic Vehicle Assembly Building.

One tool of weather forecasting and observation, which the 45th will hold off on making a firm decision on using or not until Thursday’s and Friday’s respective attempts arrive, is the weather reconnaissance aircraft.

“So there’s some of our rules where the aircraft can be very helpful, specifically the thick cloud layer rule,” said Cizek.  “So if the skies are looking really good and we don’t think it’s a situation where the weather aircraft would be able to help us that much, then we will advise not using it.” 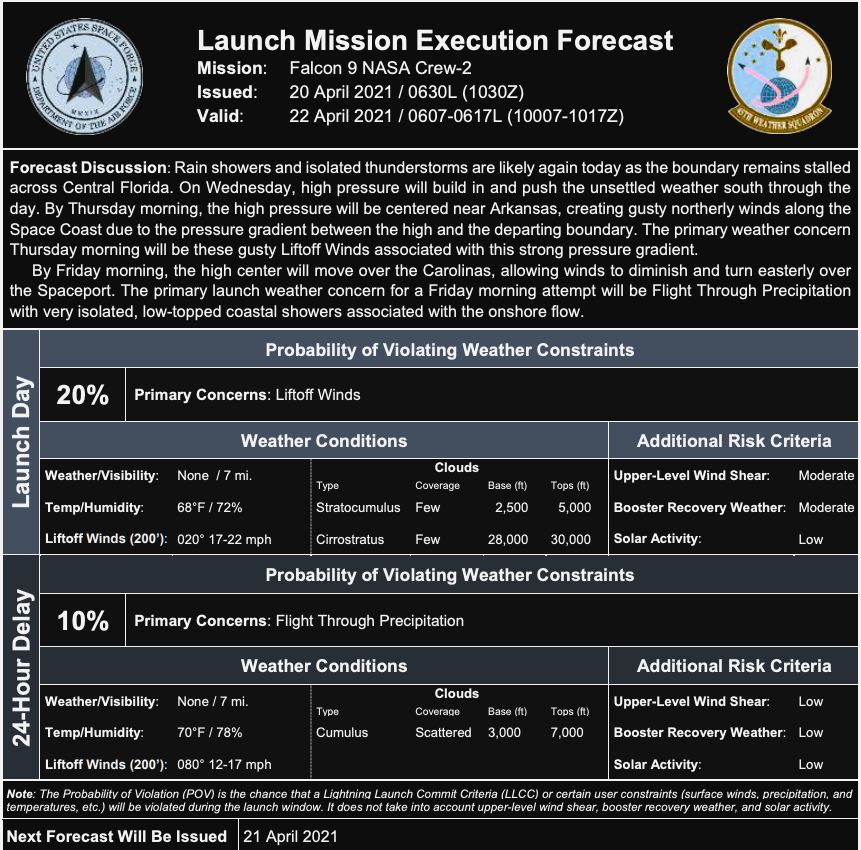 “This is the type of situation with high pressure kind of being in control where it’s likely we wouldn’t be scheduling the weather aircraft.”

Mars Express and the case of the large, mysterious Martian volcano cloud