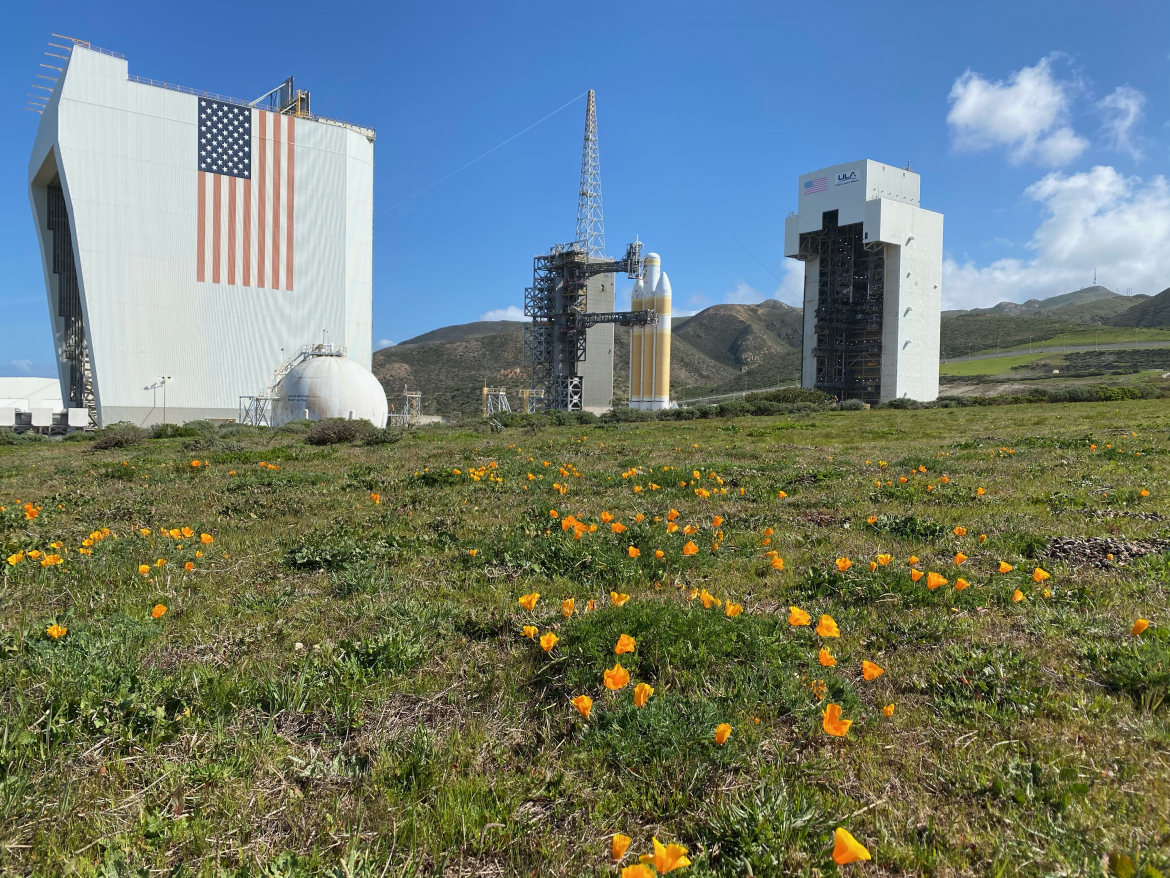 United Launch Alliance (ULA) has recently made pad upgrades to Space Launch Complex-6 (SLC-6) at Vandenberg Air Force Base, California, ahead of the upcoming Delta IV Heavy launch of the NROL-82 mission for the National Reconnaissance Office scheduled for April 26 at 15:39 EDT / 19:39 UTC.

The previous Delta IV Heavy mission, NROL-44 from SLC-37B at Cape Canaveral, Florida, was plagued by numerous issues, scrubs, and aborts that uncovered issues with the launch pad and its facilities.

After rolling to the pad in November 2019, the flight reached its first launch attempt on August 27, 2020. This attempt ended without fueling of the vehicle after a heater and pneumatic issue forced controllers to scrub the launch.

The second attempt was originally set for August 28 before being pushed to August 29 when engineers needed more time to solve the pneumatics issue. The second attempt saw the Delta IV Heavy fueled before a temperature issue on the rocket forced the teams to push into the launch window that day.

The issue was eventually resolved and teams cleared the rocket for launch. The engine start sequence began at T-7 seconds with ignition of the starboard booster’s RS-68A engine. However, an automatic abort was triggered at T-3 seconds, before the core and port RS-68A engines could start. 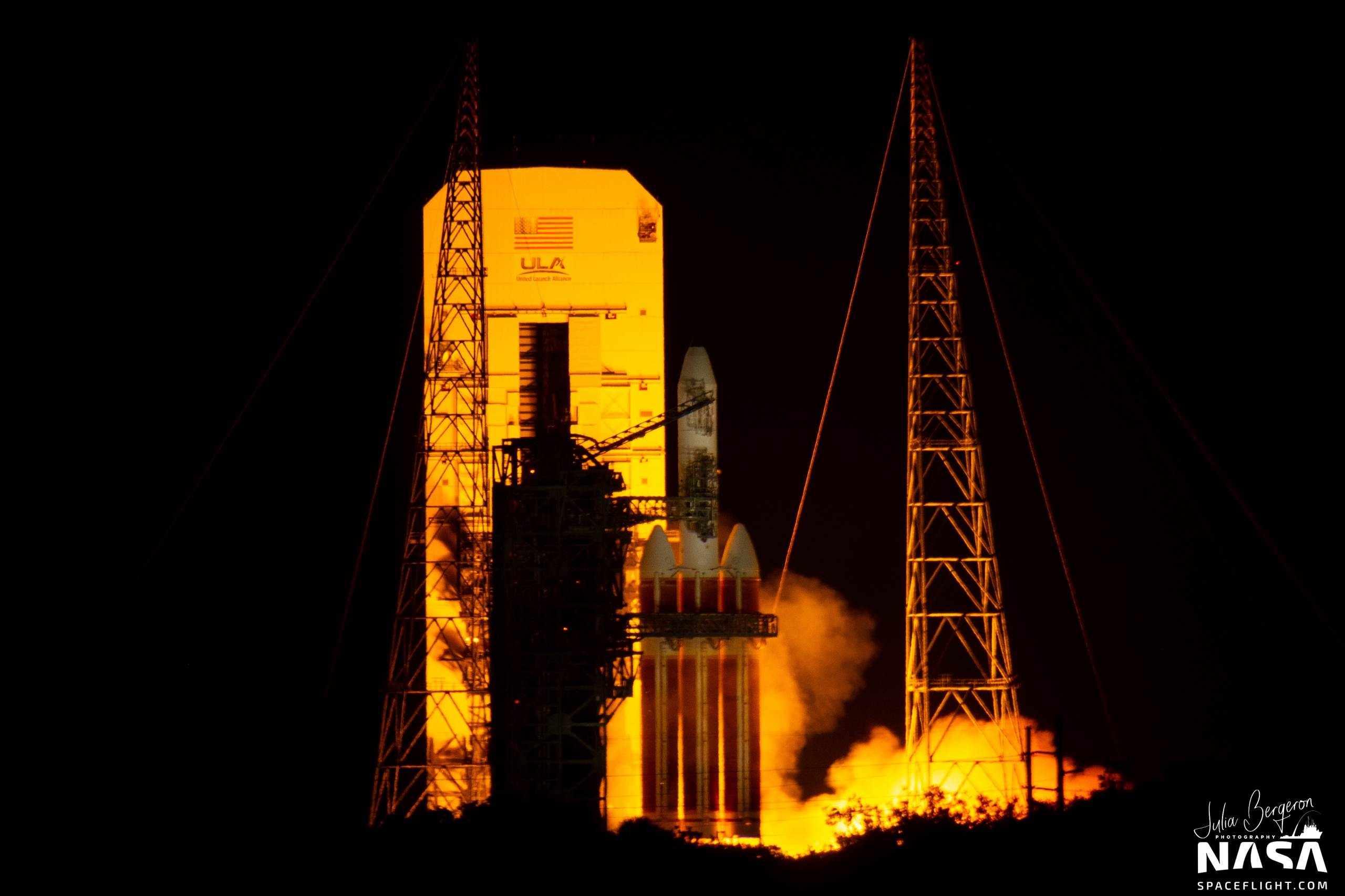 Some of these operations — especially the drying of the engines — are similar to another Aerojet Rocketdyne engine, the RS-25. As seen this year, once the RS-25’s are ignited, an extensive three-week long recycle period takes place — most of which is dedicated to engine drying and inspections.

The drying process has to do largely with the engine’s use of liquid hydrogen and liquid oxygen.

However, the engines on the Delta IV Heavy were not responsible for the abort. That was the ground system, specifically a Terminal Countdown Sequencer Rack that detected “high volumetric flow rate pressure regulator [that] did not open,” said Tory Bruno, CEO of ULA. Further investigation revealed the regulator failure after a diaphragm tore on ground support equipment.

All three regulators were replaced, and after fixing the issue and setting another target date, ULA then encountered a swing arm retraction system issue and two scrubs due to pre-launch weather and a hydraulics issue on the Mobile Service Tower. This all led to an attempt on September 30, 2020, in which additional anomalies were seen with pad SLC-37B’s swing arms that must pull away from the rocket at liftoff.

The September 30 attempt ultimately ended in a late-count hold just milliseconds prior to T-7 seconds and the start of starboard RS-68A ignition. 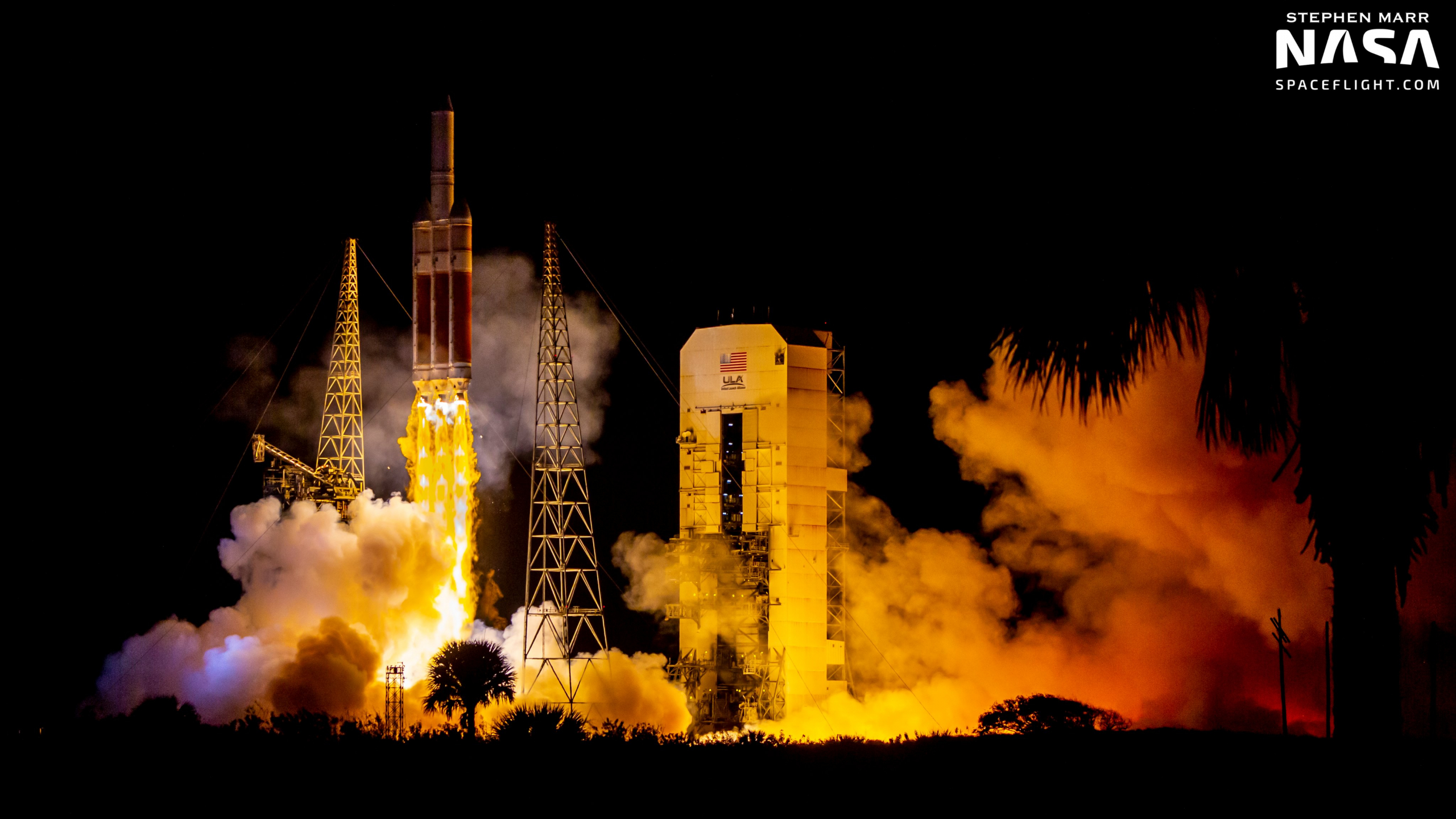 This abort was traced to a faulty sensor erroneously reporting that a valve in one of the RS-68A engines had not moved to flight position when it had indeed done so; however, a major post-second-abort review identified issues with pad hydraulics that needed to be fixed.

According to ULA, “After resolving the initial issues with the engine abort, the team performed a deep dive of the performance of our other systems, looking for any data indications of off-nominal performance that could lead to a launch delay. ULA took the time to perform additional testing and maintenance to reduce technical risk and increase launch on time probability.”

“The three swing arms are part of the Fixed Umbilical Tower (FUT). The retraction system separates the swing arms and the vehicle umbilicals from the Delta IV Heavy at launch. For the December launch campaign, the team replaced valves and flushed hydraulic fluid in the swing arm retraction system. The system was thoroughly tested to validate readiness for launch and performed nominally during the NROL-44 launch,” noted ULA to NASASpaceflight.

NROL-44 successfully lifted off without issue from SLC-37B on Thursday, December 10 local time from the Cape Canaveral Space Force Station. The work to ensure 37B was ready for NROL-44 now had to be done at Vandenberg.

“Over the past few months, we have been evaluating cross over readiness at the SLC-6 pad and have conducted the same swing arm maintenance on the west coast,” related ULA. “Similar to the swing arms already discussed, the team implemented the same deep dive philosophy and performed other data analysis and maintenance to reduce technical risk and increase launch on time probability.”

In addition to the swing arm system, SLC-6 also received work and attention to its various ground systems — particularly those that misbehaved on pad 37B for NROL-44.

Navigating both rivers and open oceans, the highly maneuverable #ULARocketShip plays a critical role in all missions launched by ULA. Let’s take a ride with the vessel as it leaves AL to deliver the #DeltaIVHeavy @NatReconOfc #NROL82 rocket to CA. @30thSpaceWing @USSF_SMC pic.twitter.com/WuAsAsMNUI

Part of ULA’s approach to ensuring its pads are ready when needed include a Wet Dress Rehearsal, or WDR, for all critical missions or when customers request the service. A WDR — typically performed for missions of national security for the NRO — cycles the rocket and pad systems through a near-complete countdown, with only engine ignition not occuring.

WDRs are designed to ferret out issues with the pad, its systems, and the rocket so that corrective actions can be taken to preserve a launch date. However, sometimes Delta IV Heavy WDRs occur months before a planned launch, negating some of the verification work the test is designed to perform, and WDRs can never eliminate all risk — given a system could always malfunction the next day.

To likewise compensate for the sometimes long periods of time between flights (and between WDRs and flights), new steps and more routine checkouts of all ULA pads and their systems have been added to the company’s standing posture.

“We maintain our launch facilities 365 days a year. Even with daily maintenance, issues arise and with continued attention to maintenance and testing we can identify issues prior to launch. Above the usual maintenance, we have implemented a sustainment and resiliency program to demonstrate system readiness for many of the systems on a periodic basis between launches in the same manner they would be used during processing and the launch campaign. This allows us to maintain operational readiness of our facilities, systems and launch teams.”

Moreso, the quite different climates between the 37B Florida pad and the SLC-6 California pad are also accounted for, with ULA noting that “While the climates are significantly different, our maintenance approaches ensure the systems remain operationally ready to support.”

ULA’s river- and sea-going Rocketship arrived at Vandenberg on April 5, 2020 carrying all three of the Delta IV Heavy booster cores, the Delta Cryogenic Second Stage (DCSS), and the payload fairing for the NROL-82 mission. 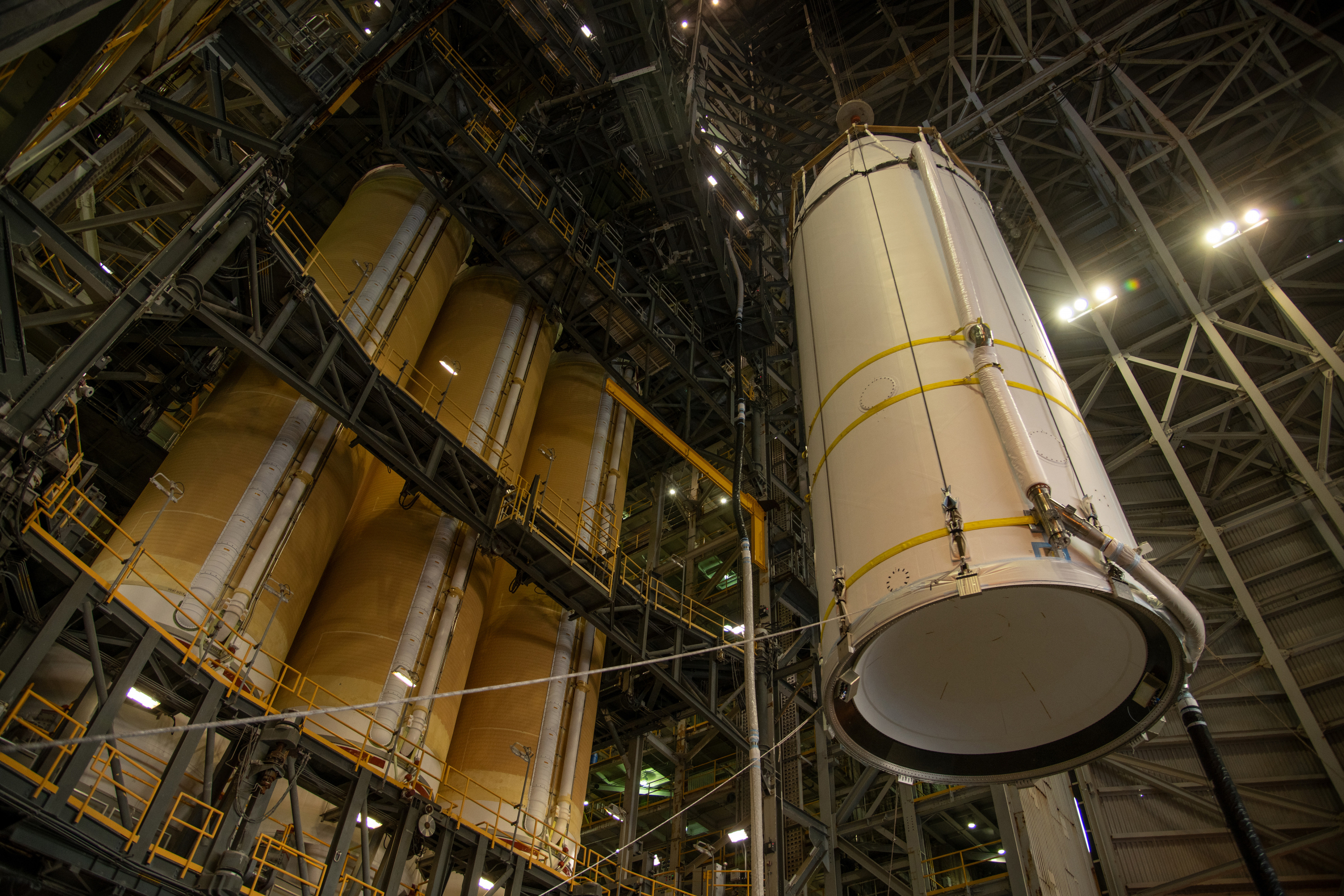 The classified NROL-82 payload is seen during the integration process at SLC-6 on March 31. Credit: ULA.

The flight hardware was then transported to the Horizontal Integration Facility (HIF) where the three booster cores were integrated and then attached to the DCSS. The Delta IV Heavy, minus the payload, was then attached to the Launch Mate Unit, which consists of 12 hold-down bolts and is used to attach the rocket to the launch table.

On February 15, 2021, the rocket was transported to the launch pad at SLC-6. Launch Vehicle On Stand (LVOS) occurred the following day with a WDR following a month later on March 16.

The classified NROL-82 payload was then brought to the pad on March 31 and integrated with the rocket.

NROL-82 will be the 13th flight of the Delta IV Heavy and its fourth from SLC-6.

Delta IV Heavy has limited missions remaining and is being phased out in favor of the Vulcan Centaur.