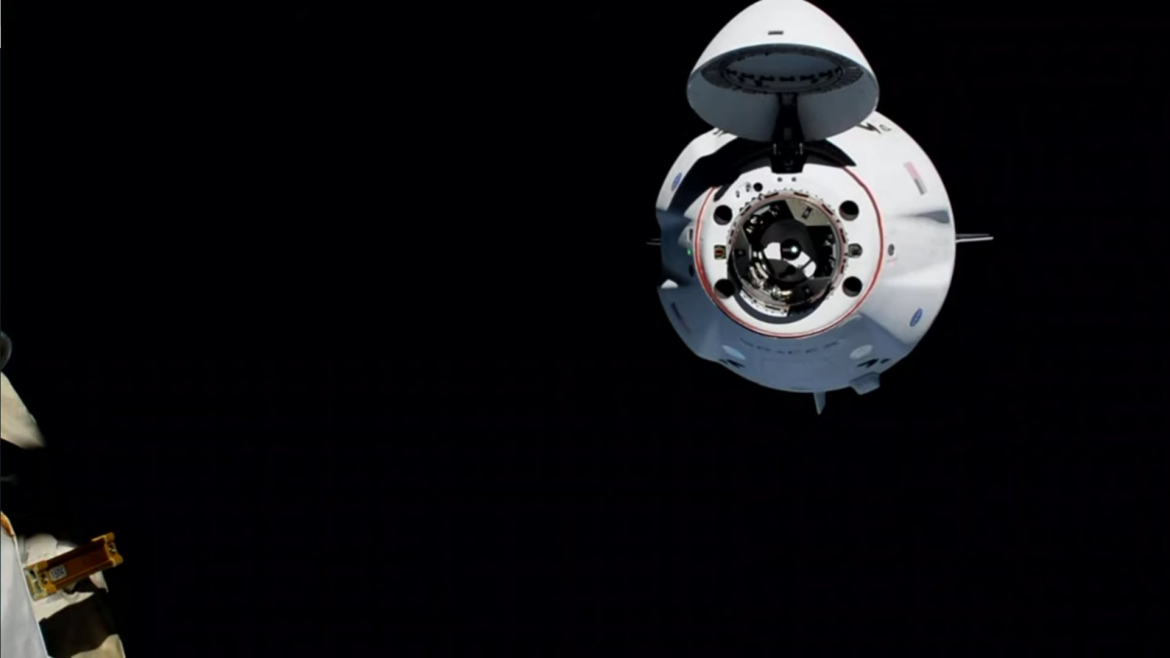 Crew-2 is the first crewed mission for NASA and SpaceX in 2021 and their third crewed launch in 12 months after a 10-year absence of human spaceflight from the United States. It is also the first mission to utilize a flight-proven Crew Dragon spacecraft and Falcon 9 first stage. The same Crew Dragon spacecraft was used during the historic Demo-2 mission, when NASA Astronauts Bob Behnken and Doug Hurley tested the spacecraft in orbit and later docked it to the ISS.

After a perfect liftoff from historic Launch Complex 39A at the Kennedy Space Center, Crew Dragon Endeavour separated from the second stage of Falcon 9 and started the deployment of the nose cone which protects the docking mechanism and primary Draco thrusters during launch. These thrusters — powered by Monomethylhydrazine and Dinitrogen tetroxide —conduct a series of five major burns and maneuvers to rendezvous with the ISS.

Endeavour‘s first post-launch maneuver, named the Phase Burn, was conducted at 06:38 EDT (10:38 UTC) for 123 seconds. This was the final burn before which the crew went to sleep. 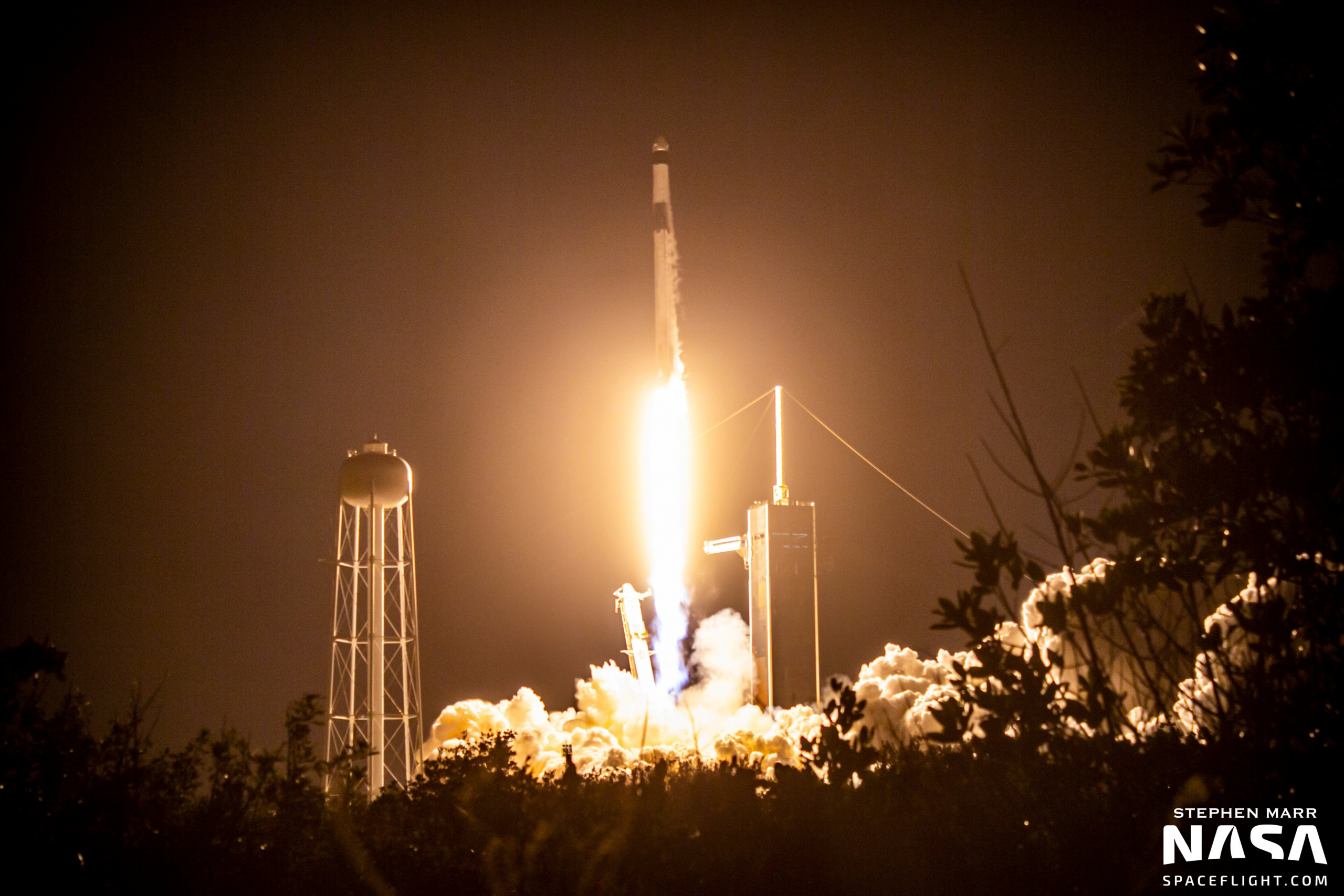 About 30 minutes prior to their scheduled sleep period, SpaceX’s Core Operations and Resources Engineer (CORE) alerted the crew about a possible conjunction with an object in orbit, within just 20 minutes. The astronauts donned their suits to protect against the risk of Endeavour depressurizing if a collision occurred.

Later, it was realized that the object was much further away than first thought, and the risk of possible conjunction was much lower. No collision avoidance maneuver was performed, and the object passed without incident.

While the astronauts were resting, Dragon completed another major maneuver: a 531-second long Boost burn at 21:25 EDT (01:25 UTC), as well as a handful of short burns calculated by Dragon’s onboard computers.

Dragon’s onboard computers then evaluated a need for an optional out of plane Approach burn, a course correction burn needed for a major approach initiation burn.. The mission teams conducted a Go/No Go poll and Crew Dragon Endeavour performed a nominal 48-second long burn at 02:48 EDT (06:48 UTC).

At this point, the crew could clearly see the ISS from the Dragon’s windows. The crew switched the communications to the big loop, allowing SpaceX’s Mission control at Hawthorne and NASA’s Mission control at Houston to talk Crew Dragon Endeavour through the rest of the approach. This also enabled the crew onboard ISS to talk to Endeavour — a crucial requirement to initiate the docking procedure. The astronauts donned their suits ahead of the upcoming Approach Initiation burn. 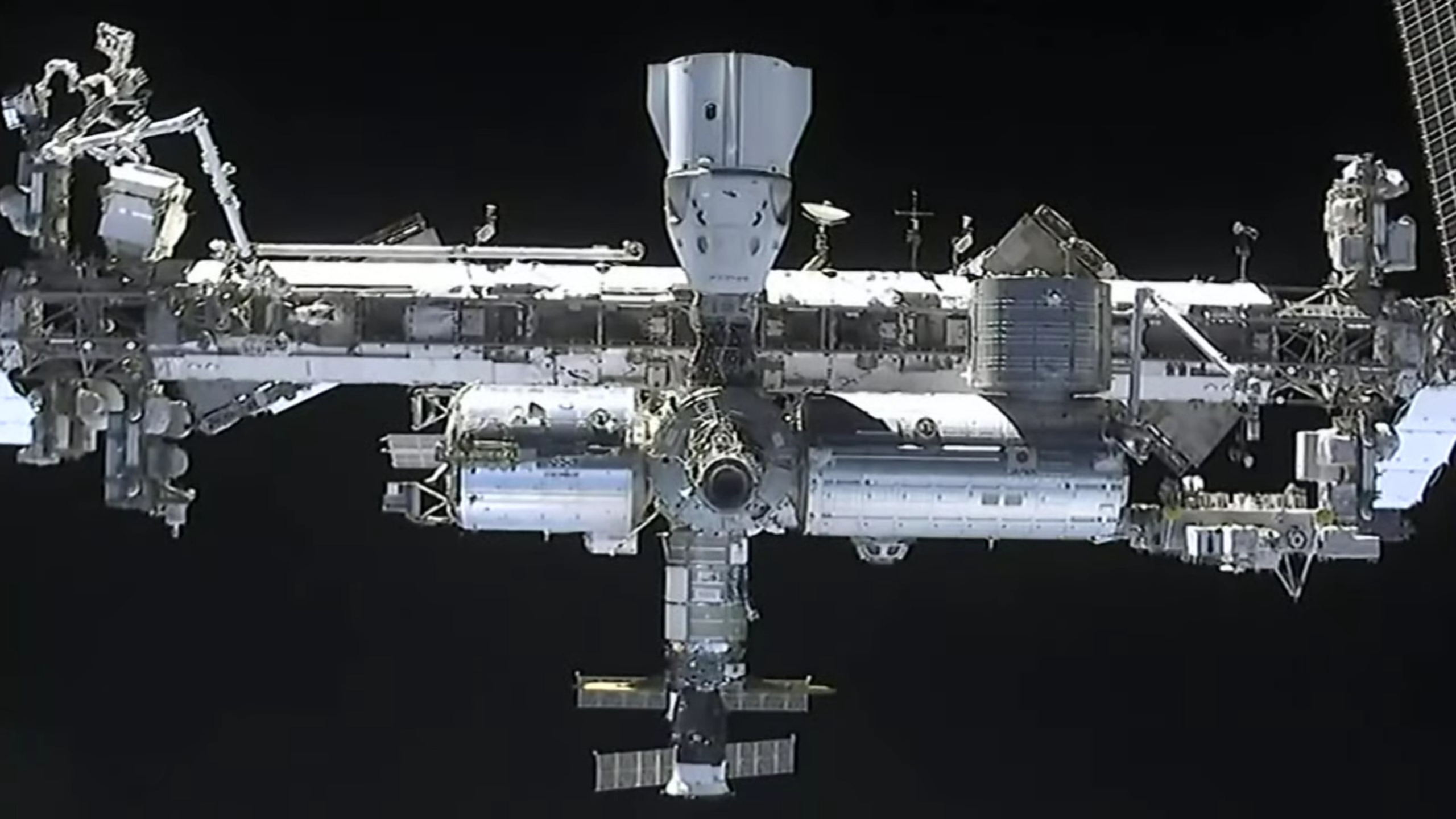 The ISS, including Crew Dragon Resilience docked to IDA-3, as seen from Endeavour during approach – via NASA

At 03:15 EDT (07:15 UTC), the mission teams were polled for readiness to initiate the approach to the ISS. Just 7.5 kilometers from the space station, Crew Dragon Endeavour performed a 90-second long Approach Initiation burn at 03:40 EDT (07:40 UTC).

On board Endeavour, the crew conducted suit leak checks, undergoing the same set of procedures followed at NASA’s Neil Armstrong Operations and Checkout building when the Crew donned their flight suits for liftoff. An optional midcourse burn was initiated at 04:05 EDT (08:05 UTC) and completed nominally.

As Endeavour got closer and closer to the space station, the integrated operations began between between NASA’s Mission Control in Houston, Texas, and SpaceX’s mission control in Hawthorne, California. This required Endeavour to follow a set of special predetermined rules in this dynamic phase of flight.

In course to ISS, one of 6 onboard Relative Global Positioning Systems (RGPS) started to malfunction. These systems are used by Dragon’s onboard computers to know its location relative to the ISS. SpaceX engineers performed a reboot of the system, which corrected the malfunction.

Dragon passed two more Go/No Go points, and polls were conducted to proceed further. One was for Waypoint 1 approach to enter the Keep-out sphere, and the second one to proceed to the 20-meter hold point at Waypoint 2.

Crew Dragon Endeavour departed from this final hold point and made contact and capture with International Docking Adaptor 2 (IDA-2) at 05:08 EDT, followed by Hard Docking at 05:20 EDT. This is the first time that two Crew Dragons are docked to the ISS simultaneously, with Dragon Resilience of the Crew-1 mission docked to IDA-3.

Docking Confirmed! Crew Dragon Endeavour has docked with the ISS for the second time, parked next to Crew Dragon Resilence. Four new humans safely delivered to the orbital outpost. pic.twitter.com/ChikwCJApg

The number of crew on station will decrease back to seven following the departure of Crew Dragon Resilience and its four Crew-1 astronauts on 28 April.

Crew-2 is the second long-duration mission to the ISS launched from US soil in the past year. Crew Dragon Endeavour will remain at the station for six months, returning no earlier than October 31.

This expedition mission also marks the second time two JAXA astronauts will live and work together on the ISS. The previous occurrence was in April 2010 when Naoko Yamazaki arrived at the station as a part of STS-131 while Soichi Noguchi was serving a long duration increment on the outpost.

This is also a historic moment in the US human spaceflight program as Crew-2 marks the second time — and the first time since December 1965 — that two US human space missions are in orbit at the same time.

During the first commercial crew astronauts’ handover, the Crew-1 and Crew-2 astronauts will spend about five days together on the station before Crew Dragon Resilience undocks from the ISS. The increase in the number of crew on board has resulted in increased research output from the ISS and more time to perform station maintenance. 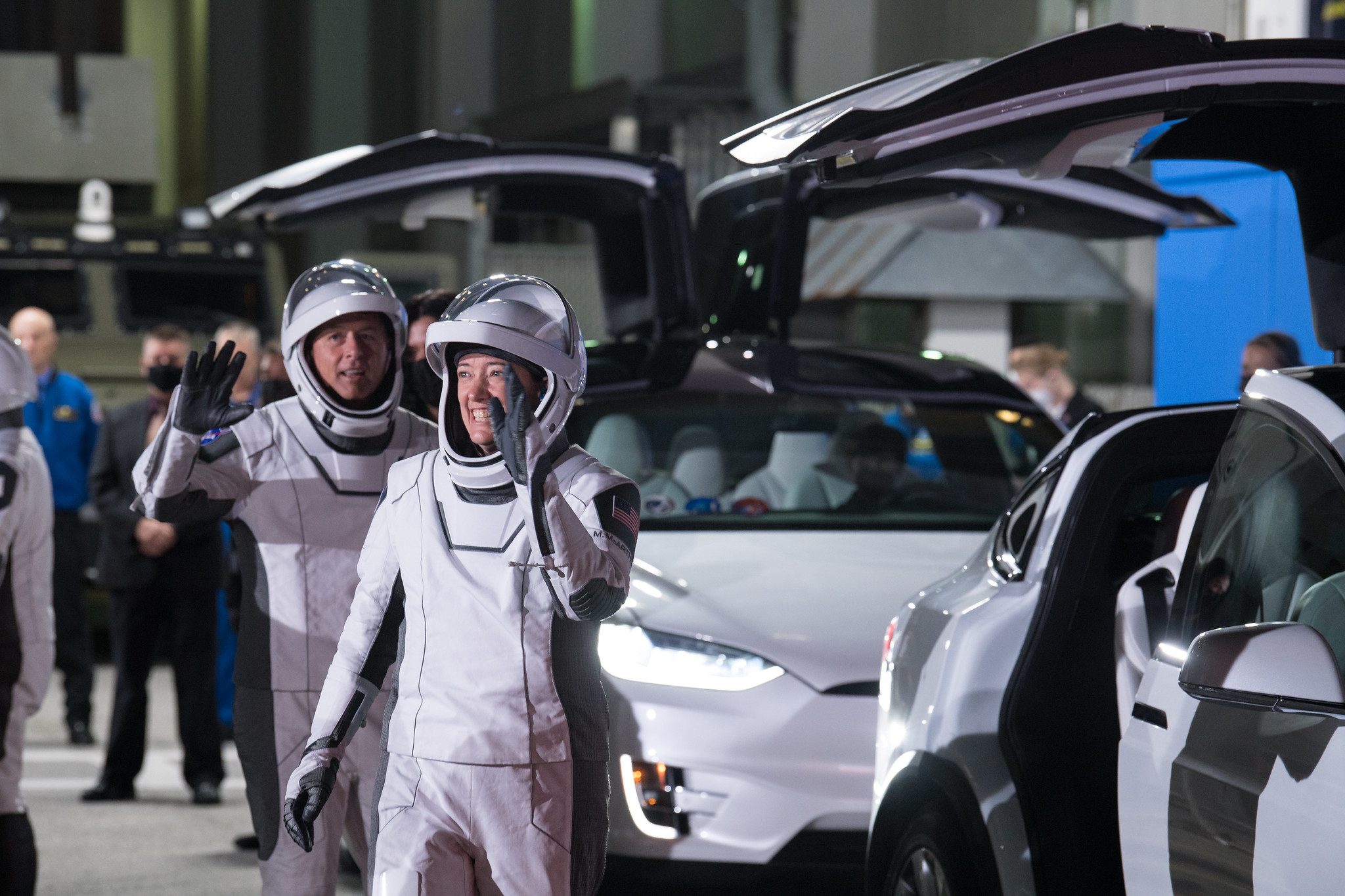 Crew-2 will continue the ongoing investigations and technology demonstrations aboard the laboratory. These include technology demonstrations to prepare for Artemis missions to the Moon, helping to understand Earth’s climate, and improving life on planet Earth. An important scientific focus on this expedition is continuing a series of Tissue Chips in Space studies. Tissue chips are small models of human organs containing multiple cell types that behave much the same as they do in the body.

Crew-2 astronauts will also play an important role in augmenting the station’s solar power system by conducting spacewalks and installing the first pair of six new ISS Roll-out Solar Arrays, set to arrive on a Cargo Dragon spacecraft in June.

During their stay, Crew-2 astronauts expect to see a range of US commercial spacecraft, including Northrop Grumman Cygnus and SpaceX’s Cargo Dragon as a part of the Commercial Resupply mission. Also scheduled during their stay is the arrival of Boeing’s CST-100 Starliner, as a part of its second Orbital Flight Test. Starliner will be mission-ready in May and targeting the August/September timeline for launch aboard ULA’s Atlas V rocket.

Following a successful flight and landing, NASA and Boeing teams plan to fly the first crewed flight of Starliner, named Crewed Flight Test or CFT, towards the end of the year. Later in the mission, the Crew-2 astronauts will also welcome SpaceX Crew-3, slated to launch no earlier than October 23.

Off the Earth, for the Earth; Endeavour lifts off with international crew for six month mission