Mars Express and the case of the large, mysterious Martian volcano cloud 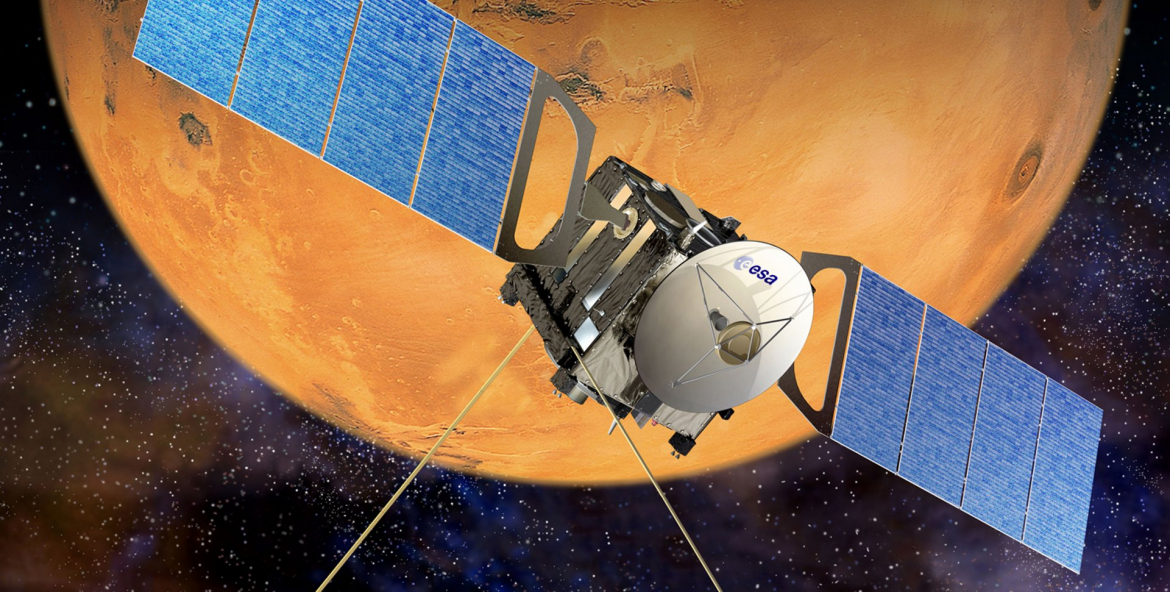 Throughout the southern Martian hemisphere’s spring and summer seasons, a large, expansive cloud emerges daily from the volcano Arsia Mons.  Why this cloud only forms at this location on Mars, what kind of cloud it is, and other puzzles to this phenomenon have plagued researchers for years — as observing Martian weather usually only happens by accident during other investigations.

Now, a team of researchers primarily using the Mars Express orbiter from the European Space Agency (ESA) — as well as data from past and present NASA and ISRO spacecraft — have pieced together the mystery surrounding this cloud.

Arsia Mons, the location where the cloud originates, is situated just south of the Martian equator on the Tharsis bulge and is the only known low-latitude (equatorial) location on Mars and the only volcano of its class that possesses clouds.

As such, this has made the regularly-forming cloud an intriguing target for study.  And in fact, Mars Express from ESA, the Mars Reconnaissance Orbiter (MRO), Mars Atmosphere and Volatile EvolutioN (MAVEN) and Viking 2 missions from NASA, as well as the Mars Orbiter Mission (MOM) from India have all observed portions of the cloud from time to time.

From the more than 100 observations that had been done previously, it was known the cloud formed somewhat regularly during the spring and summer months around Arsia Mons.  But a lack of further study precluded an ability to understand how routine the cloud’s formation was — something critical if the team wanted to schedule time with higher resolution instruments.

Awesome high-resolution view from ESA’s #MarsExpress of the curious cloud formation that appears regularly in the vicinity of the Arsia Mons volcano on #Mars 👉 https://t.co/j6N2XFYQzi

While it might seem odd that the instruments wouldn’t be used for this prior, there is a hesitancy in planning weather observations with highly detailed instruments not intended for such activity due to the unpredictability of weather patterns.

Basically, if scientists want to use an instrument or instruments to observe localized weather on Mars, they need to prove the weather will be there when the instrument on the spacecraft flies overhead.

“To clear these hurdles, we used one of Mars Express’ secret tools – the Visual Monitoring Camera, or VMC,” said Jorge Hernández Bernal of the University of the Basque Country in Bilbao, Spain, and lead author of the new findings.

The Mars Express’ wide field-of-view, low resolution VMC originally served the sole purpose of visually confirming that ESA’s Beagle 2 lander had separated from the orbiter before descending to the Martian surface.  After that, it was shut off.

A few years later, VMC was turned back on to collect images for public engagement with Mars before ESA finally reclassified the camera as a science instrument — allowing it to be used more often. 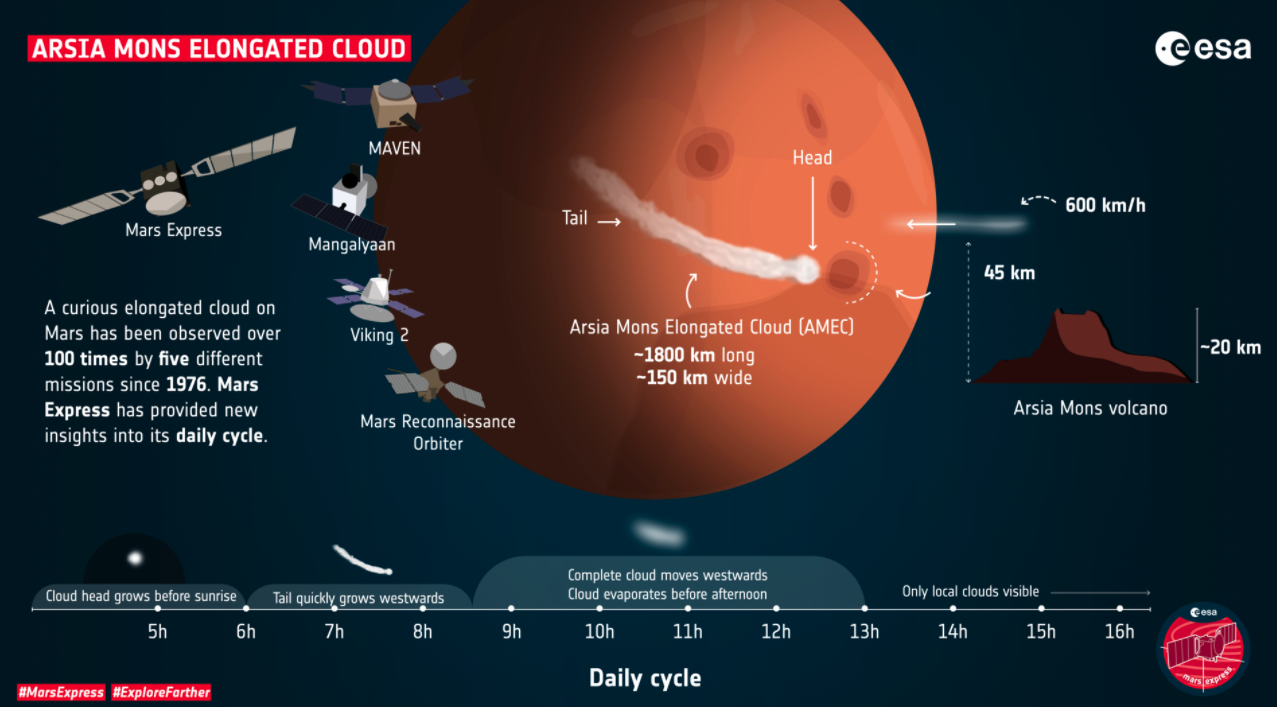 VMC has a resolution of a 2003 computer webcam.  While not outstanding, its wide field-of-view was crucial to better understanding the cloud as it enabled scientists to see the entirety of the cloud throughout its daily cycle and investigate what causes it to occur.

The camera revealed a remarkable consistency and pattern to the cloud’s daily formation.

From there, the team dug into archival data from MRO, MAVEN, MOM, and even NASA’s Viking 2 orbiter from the mid-1970s.  “We were especially excited when we dug into Viking 2’s observations from the 1970s,” said Jorge.  “We found that this huge, fascinating cloud had already been partially imaged that long ago.”

This allowed a stable picture of daily formation to form.  With that timing in hand, the team trained the High-Resolution Stereo Camera (HRSC) and Visible and Infrared Mineralogical Mapping Spectrometer (OMEGA) instruments on Mars Express at Arsia Mons.

Using 63 observations from VMC, HRSC, and OMEGA, as well as the archival MOM, MRO, MAVEN, and Viking 2 data, the team identified the cloud as an orographic cloud, or one the forms as a result of wind being forced upward by a topographical feature such as mountains, volcanoes, valleys.

The daily spring and summer Arsia Mons orographic clouds initiate in the morning around 05:00 local time as the volcano’s features force air on the western flank upward into cooler, higher altitudes where it starts to condense as it continues to rise.

This initial development occurs upward to 45 km and outward to 150 km, at which point the cloud’s top is picked up by Mars’ equatorial winds.  The top is quickly moved westward through the upper atmosphere at speeds near 600 km/h, forming the 1,800 km long tail.

Two and a half hours after sunrise, the cloud completely detaches from Arsia Mons and moves westward as it dissipates.

Orographic clouds are seen routinely on Earth; however, they are nowhere near as expansive or complex as the one observed on Mars.  Understanding this cloud’s origin now allows scientists to create better models of Mars’ local and global weather patterns as well as better understand the similarities between Mars’ atmosphere and that of Earth’s.

The cloud — given its routine and predictable nature — is likely to be a prime point of interest for the United Arab Emirates’ Al-Amal orbiter, which arrived in Martian orbit in February 2021.  That mission is the first-ever dedicated to studying Mars’ weather and as such is the Red Planet’s first true weather satellite.

Beyond the better understanding of Martian cloud formation provided by this new study, the use of VMC provides another lesson in finding unique and innovative ways to use still functioning spacecraft and instruments at the Red Planet even if their resolution or effectiveness is not as detailed as the more recent technology sent to our neighboring planet.

After reactivating the VMC, the Mars Express teams have now used it to observe and analyze Martian dust storms, high-latitude clouds, dust structures, and other changes in the Martian atmosphere.  The VMC has also monitored changes in the polar ice caps.

SpaceX, Crew-2 mission cleared for launch as eyes turn to the weather

Off the Earth, for the Earth; Endeavour lifts off with international crew for six month mission