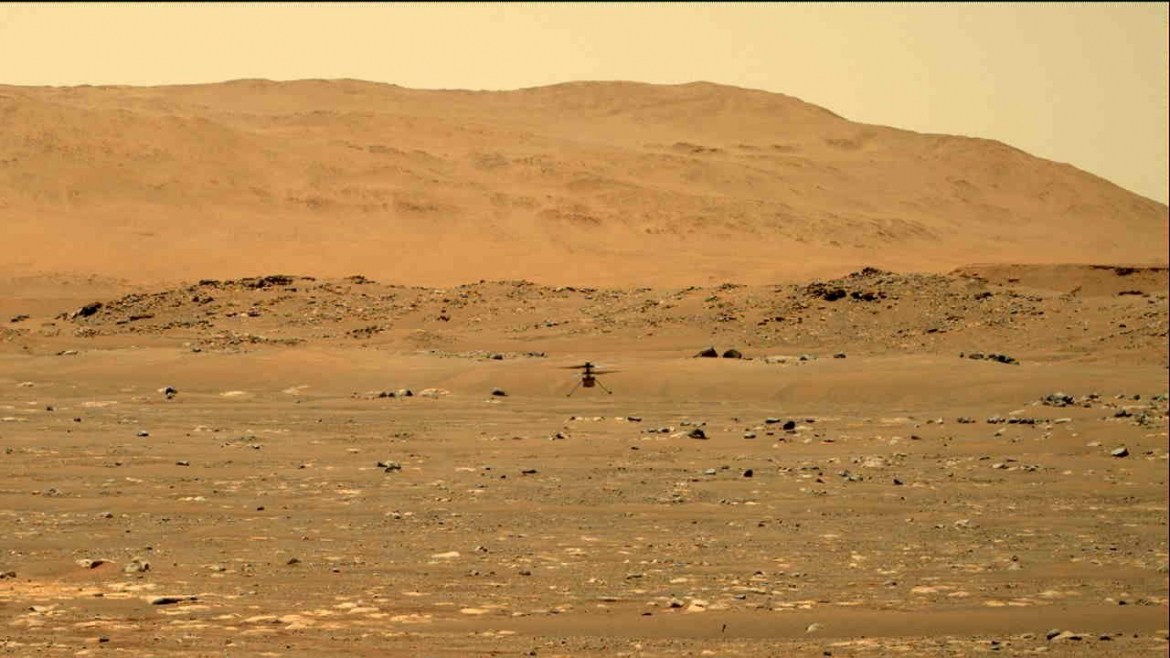 For the first time ever, non-rocket powered flight has been achieved on a body other than Earth. NASA’s Ingenuity helicopter, part of the Mars 2020 mission, completed its first flight on Monday 19 April. The vehicle lifted off at 12:34 AM PDT (07:34 UTC) and flew for 39.1 seconds. Flight controllers at the Jet Propulsion Laboratory received data confirming the successful flight at 3:46 AM PDT (10:46 UTC).

The first flight of Ingenuity begins a technology demonstration for future missions on Mars and other bodies in the solar system. With its first flight under its belt, Ingenuity will now take on the role of supporting science operations alongside the Perseverance rover, completing up to five flights during its primary 30 day mission. Additional flights could be added as part of an extended mission.

While Ingenuity does not carry any scientific instruments of its own, it is equipped with a pair of cameras which can be used to scout locations of potential science interest for Perseverance.

The lessons learned from Ingenuity will also inform future plans to fly aircraft elsewhere in the solar system. The Dragonfly mission is set to launch in 2027 and arrive at Titan in 2036, using a large, autonomous rotorcraft to explore Saturn’s largest moon. Aircraft have also been proposed to explore Venus while avoiding the harsh conditions on the surface.

Future missions to Mars may also utilize rotorcraft for research and exploration purposes, either as part of continued robotic missions or in support of human spaceflight. 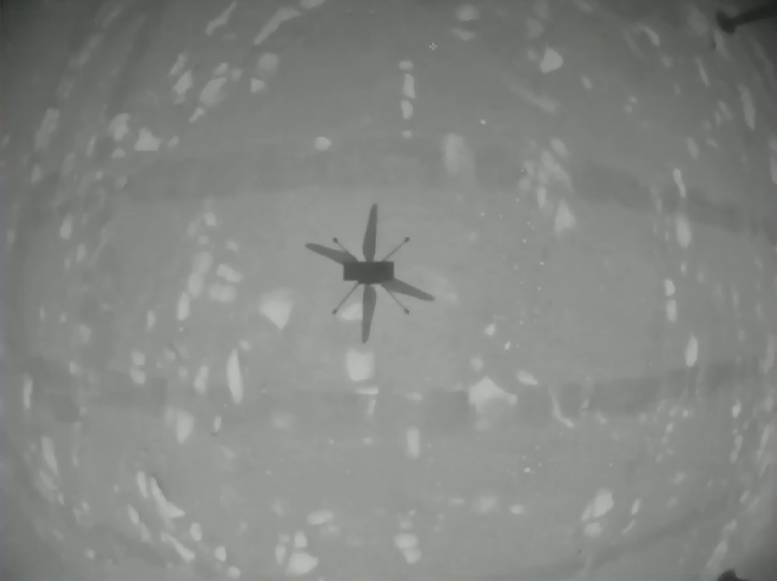 Preparations for flight began on 3 April when Ingenuity was released from the belly of the Perseverance rover. Once the rover drove away from the helicopter, the solar panel on top of Ingenuity‘s rotors began charging the batteries for flight. Ingenuity‘s lithium-ion batteries can power flights lasting up to 90 seconds.

A series of checkouts of the helicopter’s rotors incrementally verified Ingenuity was ready for flight. Once the rotor blades were unlocked, a slow spin up test to just 50 rotations per minute was completed, prior to a second test at near flight speed, approximately 2,400 rotations per minute.

During this high speed spin up test, teams at JPL identified a command sequence issue which delayed the initial flight attempt. A timing issue which prevented the safe transition of Ingenuity‘s flight computers to flight mode was corrected using a minor software update.

Once the software fix was validated using testing environments on Earth, the update was uploaded to Ingenuity and a nominal spin up test was successfully completed, clearing the way for the first flight on 19 April.

Ingenuity needs to spin a pair of coaxial, counter-rotating, 1.2 meter long carbon fiber rotors at 2,400 rotations per minute in order to generate sufficient lift in the thin Martian atmosphere. The atmospheric pressure at the surface of Mars is 0.6% of the pressure at sea level on Earth, so much more speed is required for the helicopter’s rotors to generate lift.

Offsetting this challenge slightly is the low gravity on Mars, which is just 38% as strong as gravity on the surface of Earth. This means only 38% of the lift needed to lift off on Earth is needed on Mars. Nevertheless, Ingenuity had to be light, massing just 1.8 kilograms.

Under an acceleration due to gravity of about 3.7 meters per second squared, Ingenuity weighs just 6.7 Newtons on Mars. Thus, the helicopters rotors must generate upwards of 6.7 Newtons of lift force to lift off from the surface.

The profile of the first flight included a vertical takeoff, followed by a hover at three meters in altitude for 30 seconds. While hovering, Ingenuity performed a single 90 degree turn. The helicopter then descended and touched down, with the hop lasting a total of 39.1 seconds.

The wind speed during the flight was expected to fall between two and six meters per second based on measurements from vehicles on the ground and advance forecasts.

Today I witnessed history. Now you can too. You’re watching video of the #MarsHelicopter’s first flight – a true “Wright brothers” moment.

After landing, Ingenuity sent flight telemetry to Perseverance, which then relayed the data to the Mars Reconnaissance Orbiter (MRO), which then transmitted the data downlink to the Deep Space Network (DSN) on Earth. The DSN’s Madrid facility was tasked with receiving the data from MRO.

The telemetry confirmed the successful flight, and also that all of the helicopter’s systems continue to be healthy after landing.

The flight occurred from a flat and clear area near the Perseverance rover landing site in Jezero Crater. After the successful flight, NASA Associate Administrator for Science Thomas Zurbuchen stated that this area would now be known as Wright Brothers Field, named after Orville and Wilbur Wright who pioneered powered flight on Earth. A small piece of fabric from the Wright Brothers’ aircraft is carried on board Ingenuity.

The initial 30 day flight test window lasts until 4 May, although flights beyond this window could be possible depending on the health of the helicopter and the availability of Perseverance to act as a data relay.