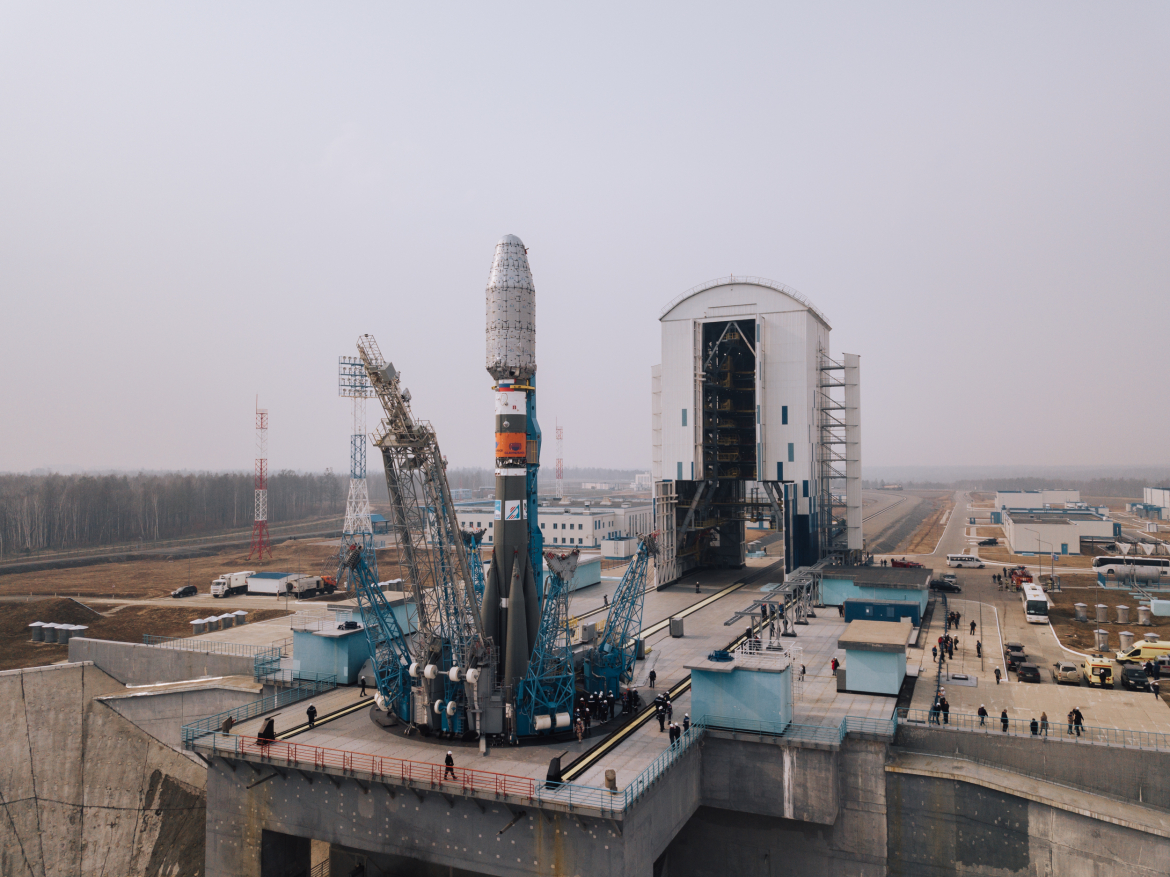 Arianespace has launched its second mission of the year on Sunday 25 April at 22:14 UTC from the Vostochny Cosmodrome in the Russian Far East. The flight carried 36 more OneWeb satellites to Low Earth Orbit on board a Soyuz-2.1b launch vehicle, operated in partnership with Starsem and Roscosmos.

The Soyuz-2.1b rocket made its 56th flight for Arianespace and its Starsem affiliate, and its third launch from Vostochny for Starsem (the eighth Soyuz launch from Vostochny overall). This mission was the sixth flight of the OneWeb internet satellite constellation, and it launched 36 satellites into a polar orbit inclined 87.4 degrees to the equator, at an altitude of approximately 450 kilometers.

The constellation will take 20 Soyuz launches to finish, and like other competitor services such as Starlink, is designed to provide high speed, low latency broadband services to areas where such service is unavailable now. Whereas Starlink is being marketed to individuals, OneWeb’s services are designed for enterprise customers, including broadband providers. User terminals can enable 3G, LTE, 5G, and Wi-Fi service over land, sea, and air.

Later this year, initial service will be made available to areas in the Arctic, Greenland, Iceland, the United Kingdom, Alaska, Canada and Northern Europe, before the worldwide rollout in 2022. The Northern Hemisphere will be covered first, followed by the Southern Hemisphere.

OneWeb and Airbus Defence and Space have teamed up to construct a production line that can build two satellites per day, through the OneWeb Satellites venture. These satellites are manufactured in a facility in Merritt Island, Florida, adjacent to the Kennedy Space Center, and flown to their launch site for integration with a satellite dispenser built by RUAG in Sweden. The satellites for Flight 6 arrived at Vostochny on 5 April.

The satellites and dispenser are mounted atop a Fregat upper stage and encapsulated in a 4.1 meter diameter ST fairing before being mounted on the Soyuz launch vehicle. The integrated vehicle was rolled out to Site 1S and raised vertical on 22 April.

The Fregat upper stage is capable of restarting twenty times after launch and is useful for complex missions such as this. OneWeb Flight 6 takes 3 hours, 51 minutes, 40 seconds to complete, with nine separation events and 11 Fregat firings.

The payload masses 5,808 kg, and the 36 satellites are separated into different orbital planes to meet the constellation’s requirements. They will be at an initial altitude of 450 km before being maneuvered to their final orbit at 1,200 km altitude. 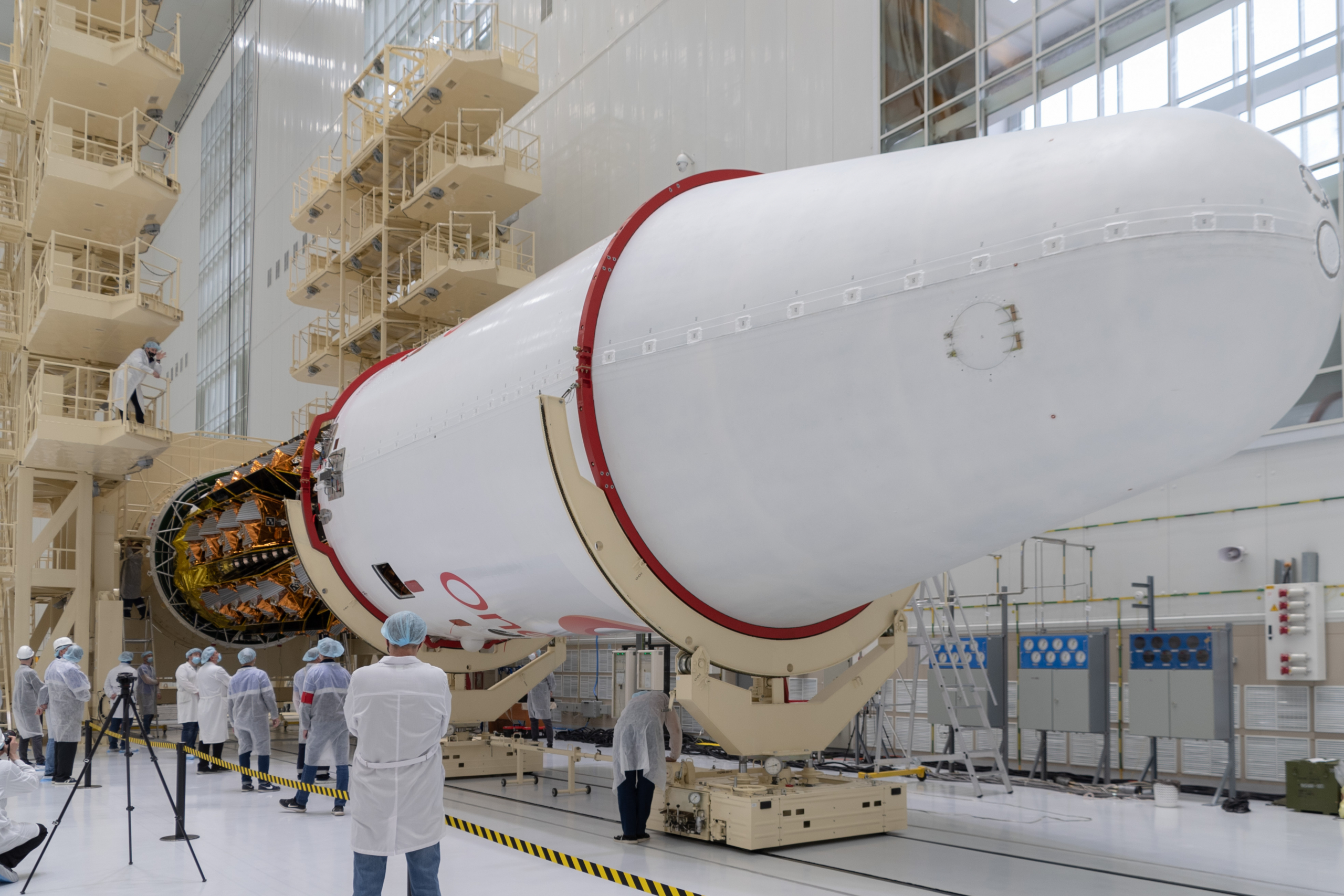 The OneWeb Flight 6 satellites are encapsulated in the Soyuz-2.1b payload fairing – via Roscosmos

The OneWeb satellites have been designed to deorbit within 25 years of retirement, in keeping with space debris mitigation guidelines. The issue of space debris has gained more attention in recent years due to the emergence of large satellite constellations as well as several high profile near-misses on orbit.

This issue was highlighted recently when a potential conjunction between a OneWeb and a Starlink satellite was reported by the US Space Force’s 18th Space Control Squadron. OneWeb and SpaceX contacted each other regarding the potential conjunction and no collision occurred; however OneWeb CEO Chris McLaughlin expressed concerns about the Starlink automated collision avoidance system and the number of satellites Starlink wanted to place in orbit for its constellation.

The probability of collision had briefly reached 1.3 percent, but SpaceX stated that the threshold for a maneuver being required had never been reached, and that the miss distance had become much greater even without any maneuvers. The SpaceX automatic collision avoidance system was disabled to allow the OneWeb satellite to conduct an avoidance maneuver.

OneWeb was founded in 2012 by Greg Wyler and launched its first satellites in February 2019. After failing to raise enough capital from investors, OneWeb filed for Chapter 11 bankruptcy in May 2020, laying off most of its employees but retaining the ability to control existing satellites in orbit. In the summer of 2020, the UK Government and Bharti Airtel won a bid to purchase the company, and in November, OneWeb emerged from bankruptcy. 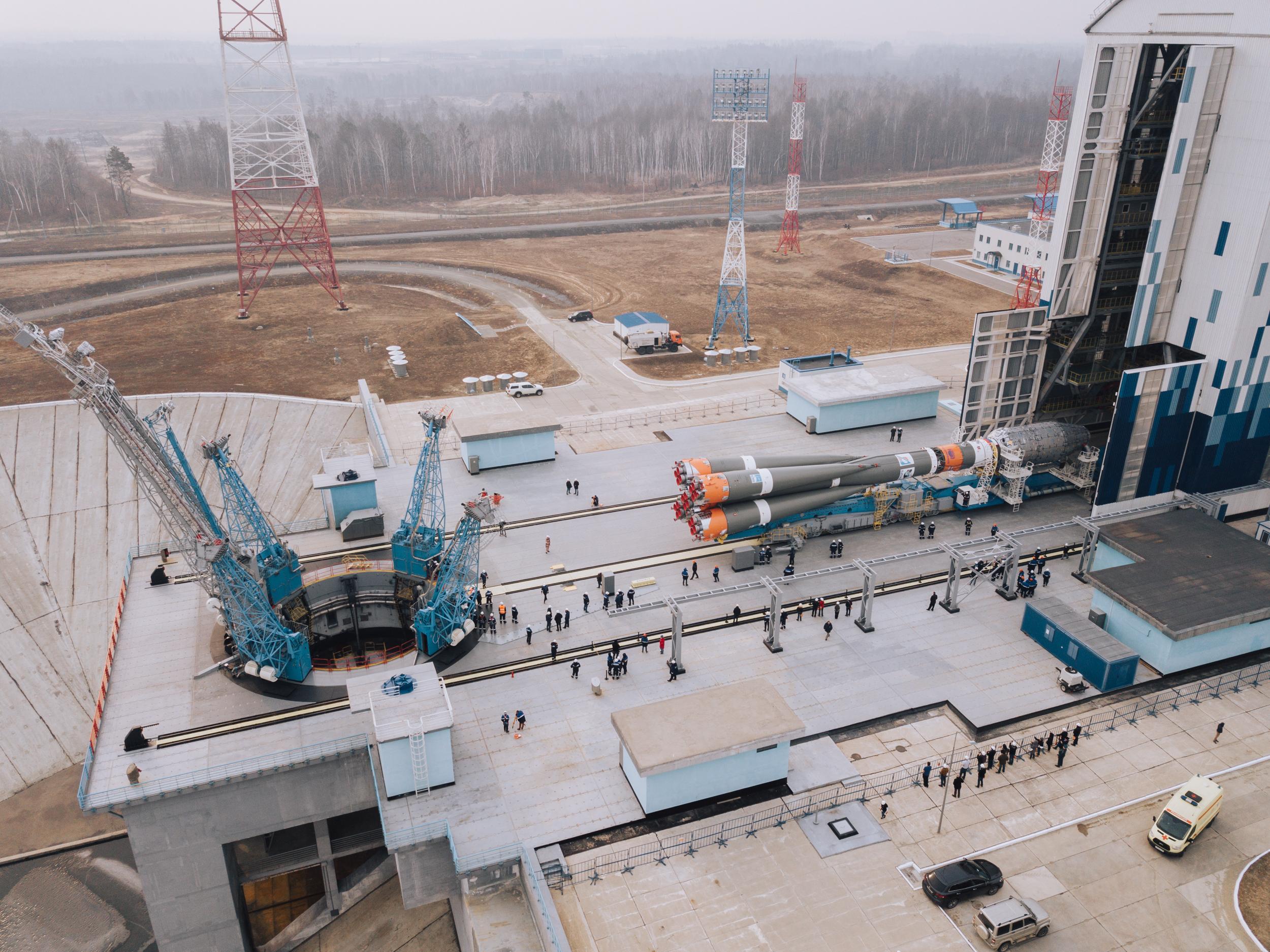 The Soyuz-2.1b launch vehicle for OneWeb Flight 6 is rolled to the launch pad – via Roscosmos

The UK Government had floated the idea of using the OneWeb constellation as a replacement for the Galileo navigation constellation, which Britain can no longer use as a result of exiting the European Union. However, these satellites had not been designed for that purpose and the constellation will now be built up to accomplish its original purpose of bringing broadband to areas without service, including rural parts of Britain.

The OneWeb constellation, Starlink, Amazon’s Project Kuiper, and other low Earth orbiting constellations promise to revolutionize broadband communications and other areas including meteorology and remote sensing. However, the number of satellites in these constellations has raised concerns for collisions in orbit that could jeopardize other spacecraft, as well as concerns about the night sky and astronomical observations being affected.

As more launches like OneWeb Flight 6 lift off, more places around the world will get broadband communications capability, while the 18th Space Control Squadron and other interested parties keep a watch on the crowded skies in Earth orbit.