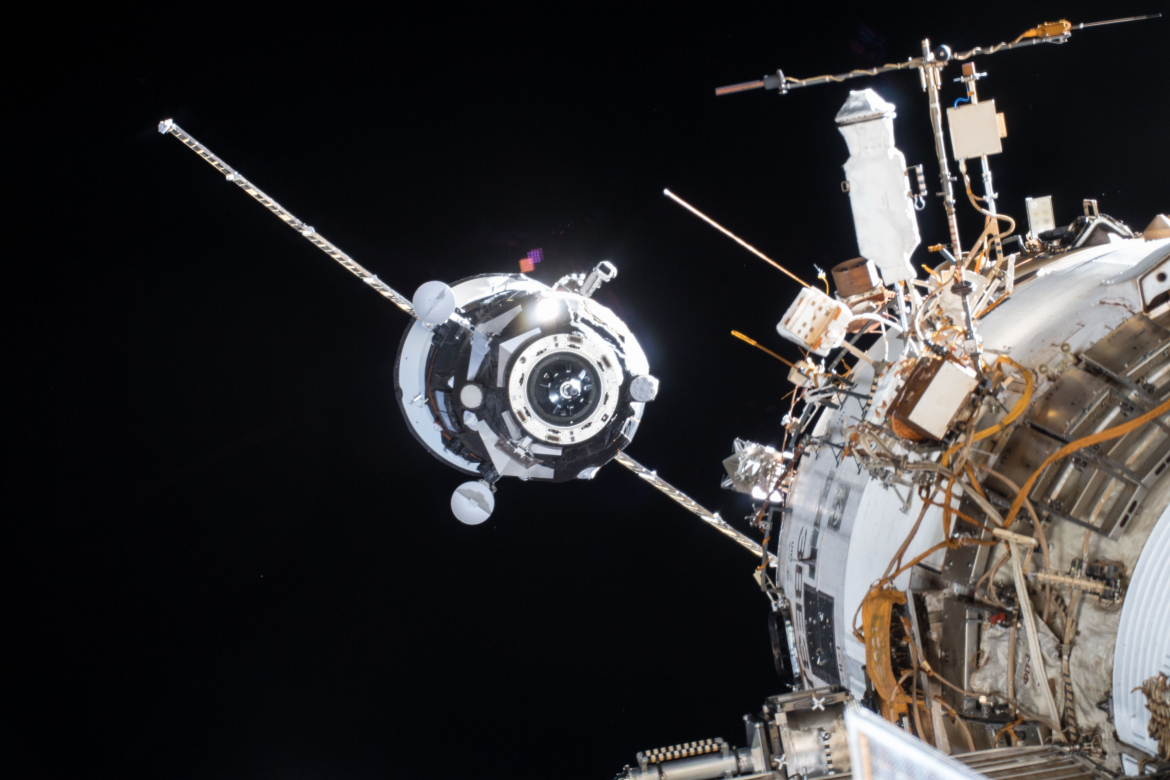 According to Roscosmos representatives, the withdrawal from the ISS will be gradual, which means that for some time the ISS and ROSS will work in space in parallel. At the same time, Russia and China have plans to build a lunar space station together.

Since ROSS is still a planned station, the fate of the Russian segment of the ISS – the only station that cosmonauts can fly to now and in the near future — is important. Despite the fact that Russia plans to leave ISS in 2025, both Nauka and Prichal will be launched to the ISS.

According to Alexander Bloshenko, the lifetime of Nauka will come to an end at this time, taking to account the long history of this module and the intensive load that is expected on the Russian segment in the coming years.

Officially, the decision to leave the ISS hasn’t been made yet. There is a proposal prepared by the Russian space industry and supported by the government, which was presented to President Vladimir Putin on April 12.  Roscosmos is waiting for a regulatory act to proceed with the plan, and as a result, a directive from the government on the start of the negotiations about the withdrawal. 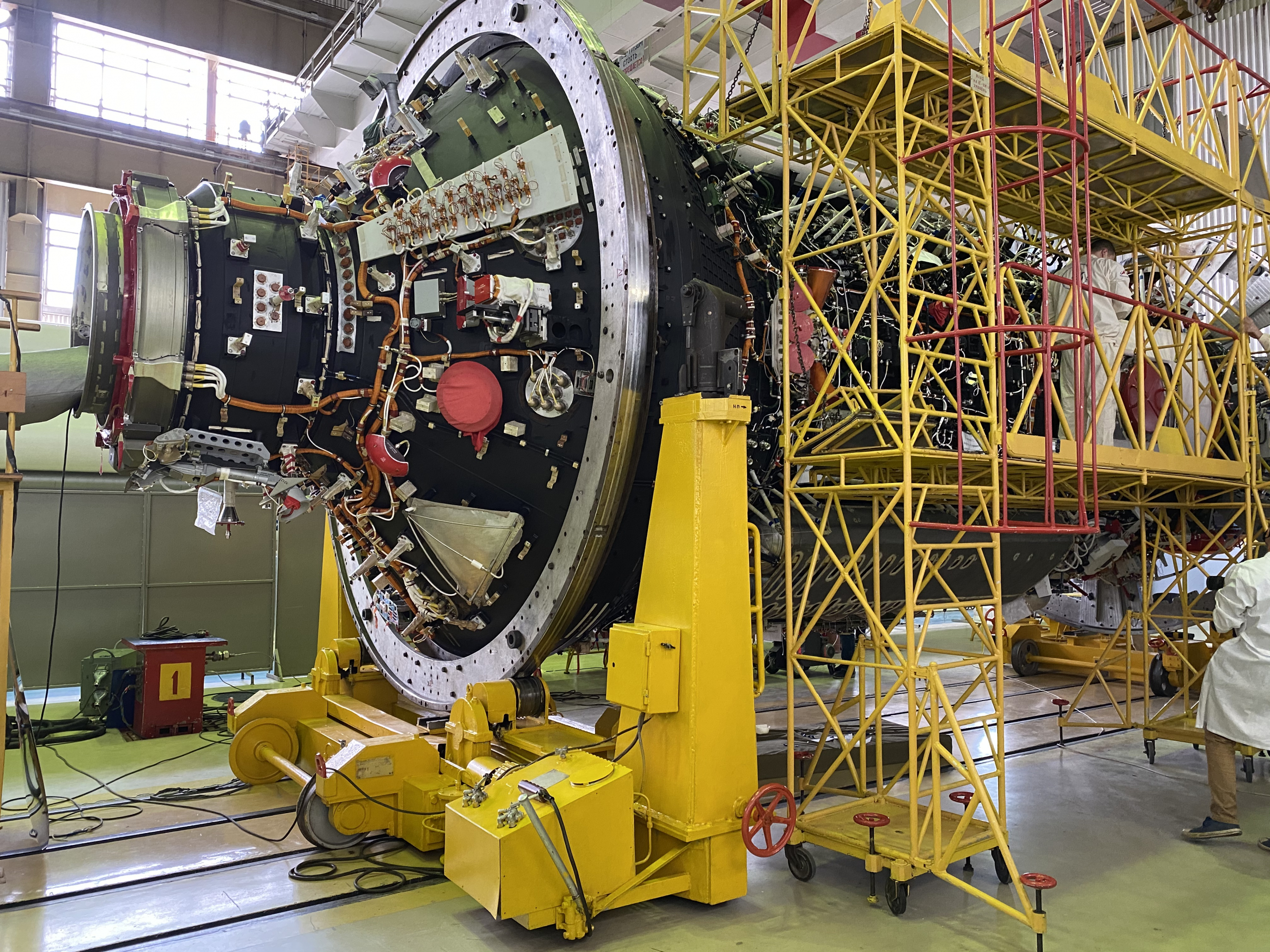 The Nauka module undergoing preparations for launch to the ISS no earlier than July. (Credit: Katya Pavlushchenko)

It is necessary to inform the ISS partners of such a decision at least a year before starting the withdrawal procedures, so Roscosmos, despite statements, still has time for a possible reconsideration.

Asked about the withdrawal, Russian officials said the exit from the ISS will not be instantaneous, and there will be a transition period which includes a transfer of control commands and technical documentation to NASA, the Canadian Space Agency, the Japan Aerospace Exploration Agency, and the European Space Agency.

Roscosmos doesn’t want a pause between their withdrawal from the ISS and the beginning of operations with ROSS because it may lead to the degradation of the space industry and the loss of knowledge and skills and specialists. So if the scheduled launch of the first module of the ROSS is postponed (which happens often, not only in Roscosmos), it would be a nice motive to continue the operation of the Russian segment of the ISS.

According to Bloshenko, the current orbit of the ISS, and in particular its inclination, has exhausted itself in terms of scientific potential.  Bloshenko stated that the intensity of breakthrough work on the ISS is reduced, and from this inclination, the maximum knowledge has already been obtained.

This has led to plans to place the Russian Orbital Service Station in a polar orbit, which from the point of view of Roscosmos, has a number of advantages. First, it can duplicate and insure the capabilities of remote sensing spacecraft like those that monitor the Northern Sea Route. Second, in a higher-inclination orbit, the external cosmic radiation is stronger. Flights in such conditions, according to Roscosmos, will better prepare cosmonauts for deep space missions.

For this reason, the ROSS will be launched into a high-latitude orbit with an inclination of 97 degrees at an altitude of 300-350 km. From ROSS, the cosmonauts can view all of the territory of Russia, unlike the ISS from which they can see only 20% of the territory.

A third difference is that ROSS will be a specialized industrial space station. It will have production compartments that will allow it to perform a number of new tasks that are not available on the ISS.

In the second stage of assembly, the ROSS will include a so-called slipway module, on which it will be possible to park various types of automatic spacecraft and satellites, repair them, refuel them, adjust the payload, and then send them back to autonomous flight. In addition, after some time, Roscosmos plans to create a fleet of tugs that will be able to launch these satellites from the station into the right orbit at the right time. 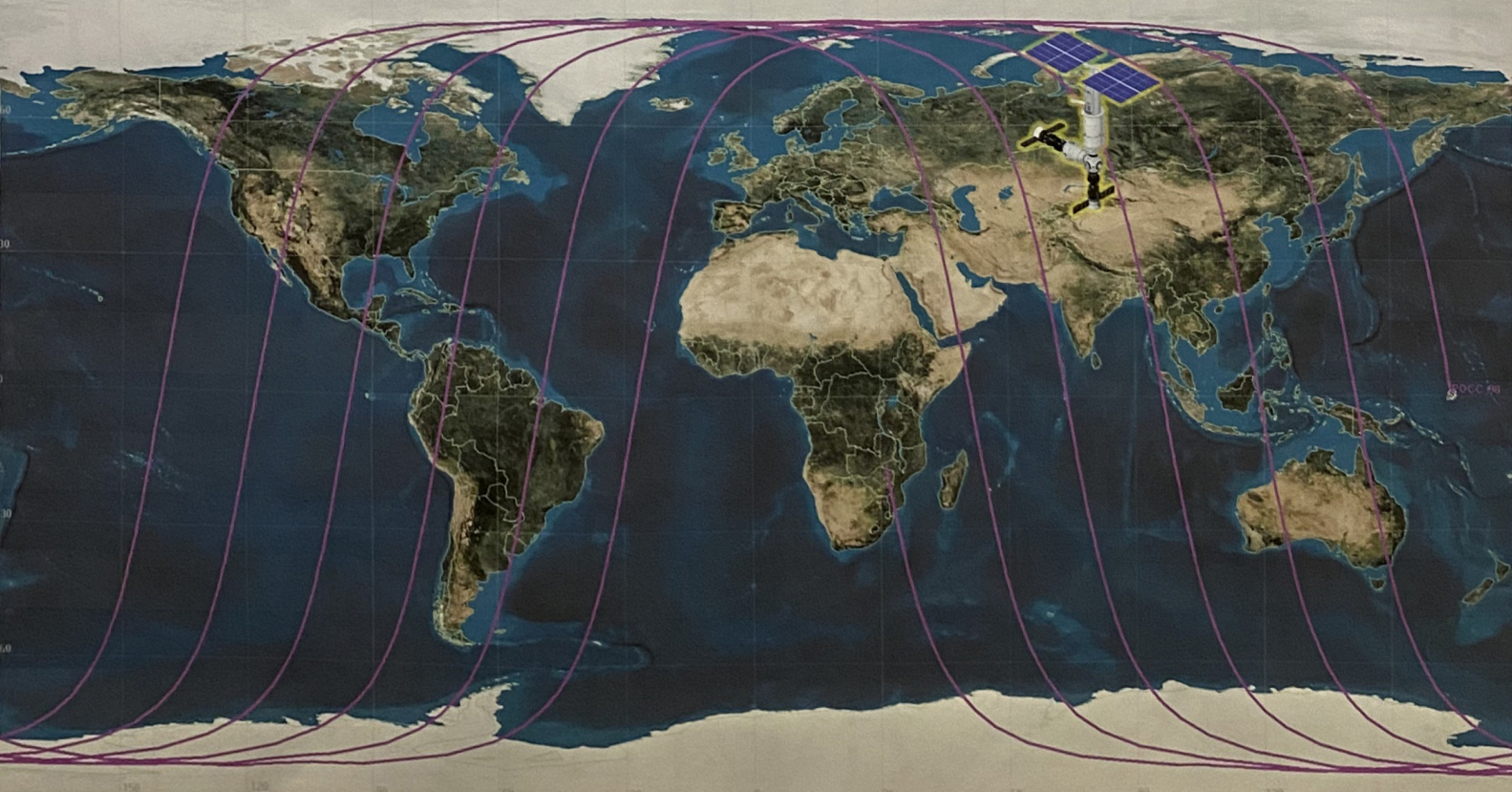 The proposed orbit of the ROSS (Credit: Katya Pavlushchenko)

Crews will not stay at ROSS permanently but will arrive as tasks for them accumulate. According to officials, the first stage of the station’s assembly will need one crewed and one or two cargo ships per year.

The second phase of construction, which according to Vladimir Solovyov is planned for 2030-2035, will add the Logistics and Purpose Production Modules to the station as well as a slipway platform for servicing spacecraft. The pressurized volume of the station at this stage will increase to 450 m3, and it will be able to store up to 9,100 kg of fuel (N2O4/UDMH), house a maximum crew size of four, and will receive one or two crewed and one to three cargo ships per year.

NEM, based on the Science and Power Module originally planned for the ISS, will be the first module launched. Solovyov is confident that the launch will take place in 2025. Flight hardware is in an early stage of assembly. A dynamic model of a pressurized compartment and a model of an unpressurized compartment for vibrodynamic testing have also been built.

As the first module of the new station, NEM will have to function independently, something it was not originally designed to do. This will require modifications of the main onboard systems, including power supply, motion control, docking, and life support for the cosmonauts.

Alexey Bideev, General Designer of the module, stated that NEM will be equipped with main engines that will take the spacecraft to a specific orbit. It will also have smaller thrusters to provide orientation and stabilization support. In addition to the engines, the unpressurized compartment contains the module’s fuel tanks, and it is around this compartment that the solar panels, with an area of more than 200 m2, will be attached. 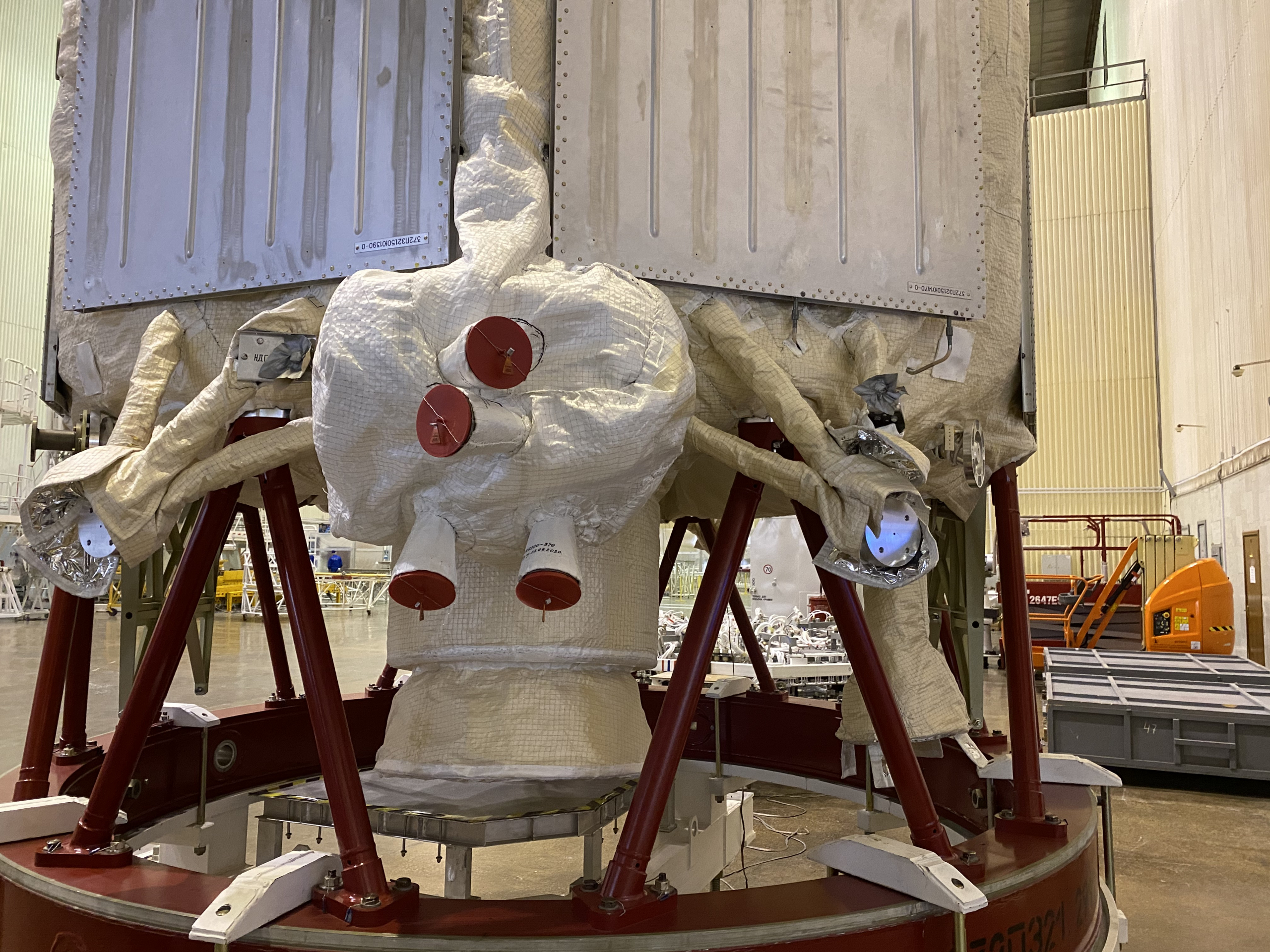 The so-called multi-purpose combined package of the module, a new technological development for Russia, will be placed outside the unpressurized compartment: it will serve as a radiator for the thermal regulation system, a micrometeoroid protection system, and even as an element of insulation. It will allow the station to vary its discharged heat output depending on the heat load.

The NEM will also be equipped with refuelable fuel tanks with flexible bellows structure for a fuel reserve (N2O4/UDMH) of more than 2.5 tons. RSC Energia engineers learned how to make this type of fuel tank again after 20 years when they last made the ISS service module (FGB). The new tanks with flexible bellows are not a copy of those made for the FGB; they are made from new materials using new technologies. This is one of the critical elements of the module.

Recently, the tank prototypes were tested successfully. Alexey Bideev also said there will be no gyrodines on NEM, and they will instead be installed later on other modules.

The module will be launched on Angara A5M from the Vostochny cosmodrome, which presents some complications. Even though Angara A5M is a powerful rocket, it still has mass restrictions (as all rockets do) which NEM must comply with. “We can’t put everything we want into the first module. Of course, it would be good to have a cost-free orientation system already at the early stages, but we will have to integrate it into the station a little later. When and where exactly – it will be clear at the stage of preliminary design”, said Bideev.

Officials believe it will take one and a half to two years to modify the NEM for the needs of the new station. 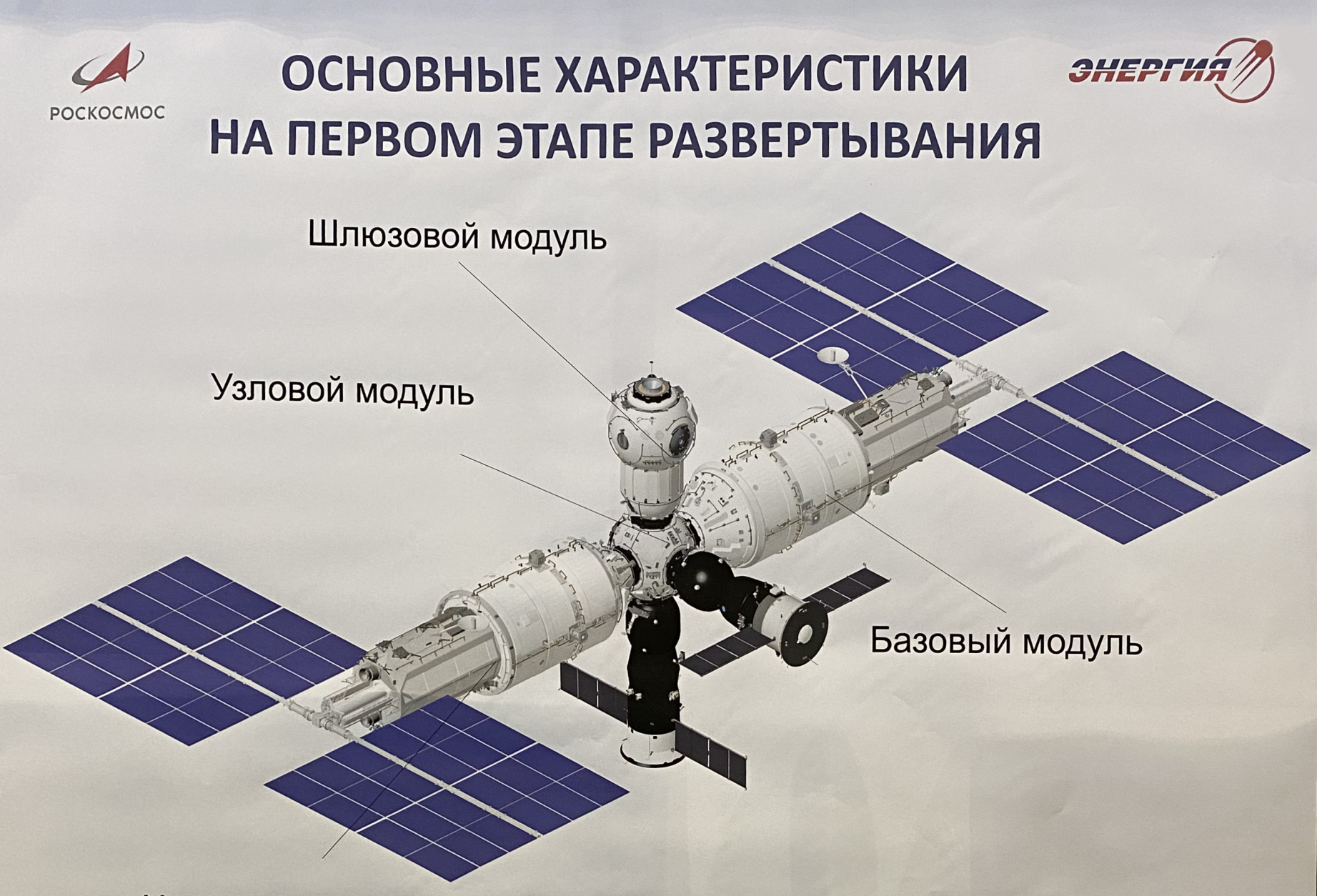 Experiments in artificial gravity using ROSS during assembly will not be provided; while the Institute of Biomedical Problems is working to establish that capability later on, there is no guarantee it will occur.

When asked about the prospects of cooperation between Roscosmos and private companies, Bloshenko said that for Roscosmos the balance between reliability and innovation is chosen in the direction of reliability. He states that Russia will start working with private companies in the direction of small satellite platforms and light-class launch vehicles and that, in the future, when cooperation is established, it will be possible to talk about tourist flight projects.

In the meantime, officials are not considering working with private companies on crewed spaceflights.

There are no plans to launch crewed ships to the new station from Plesetsk because it is a military cosmodrome.

(Tweet translation: “New manned ship #Orel with a crew can fly in 2025 not to the International Space Station, but to a Russian station, the head of Roscosmos Dmitry Rogozin said on Friday. More details:https://roscosmos.ru/30866/“)

Another major project in which Roscosmos is going to participate is a joint Russian-Chinese lunar station.

According to Bloshenko, Russia and the People’s Republic of China have signed an agreement to cooperate in the development of a scientific lunar station.

The technical details of the design and lifetime are still to be determined, but there is a complete understanding and partnership with China, a striking difference to the “too-US-centric” issues Roscosmos has voiced about the similar international effort of the Artemis program and the Lunar Gateway.

For the joint Russian-Chinese lunar station, Roscosmos has an equal partnership cooperation agreement with China, and an agreement has already been reached between the heads of the Russian and Chinese space agencies on the mutual integration of launch vehicles and crewed spacecrafts.

This will allow the Russian Oryol crew vehicle to fly on a Chinese superheavy launcher and the Chinese human spaceship to fly on a Russian superheavy rocket, which will be needed to deploy a lunar base.