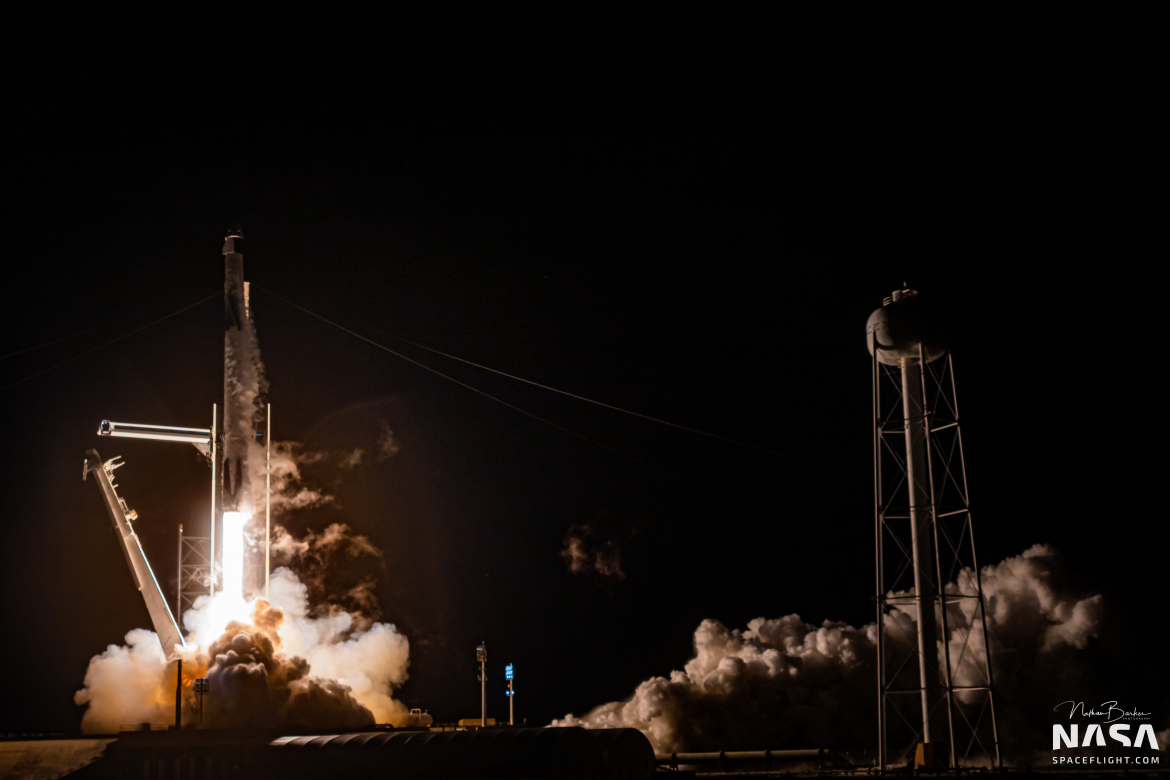 With launch now just a few weeks away, SpaceX and NASA have entered final preparations for the second operational Crew Dragon mission. This will be SpaceX’s second long-duration crew rotation for NASA as a part of the Commercial Crew program.

Crew-2 will launch on a SpaceX Falcon 9 rocket and Crew Dragon spacecraft from historic LC-39A at the Kennedy Space Center on April 22 at 6:11 AM EDT (10:11 UTC). It will also be the first SpaceX crew mission to use flight-proven hardware with Falcon 9 B1061-2 and Crew Dragon Endeavour C206-2.

The crew consists of four veteran astronauts with NASA astronauts Shane Kimbrough and Megan McArthur serving as Spacecraft Commander and Pilot, respectively. They will be joined by JAXA astronaut Akihiko Hoshide and ESA astronaut Thomas Pesquet as Mission Specialists.

This is the first time more then one international partner will fly on a Commercial Crew vehicle and first time more than one international astronaut will fly on a U.S. spacecraft since Koichi Wakata of JAXA and Julie Payette of the Canadian Space Agency (CSA) returned together on shuttle Endeavour’s STS-127 mission in July 2009 – Julie having launched with the mission and Koichi using the Orbiter to return home after four months on the Station. 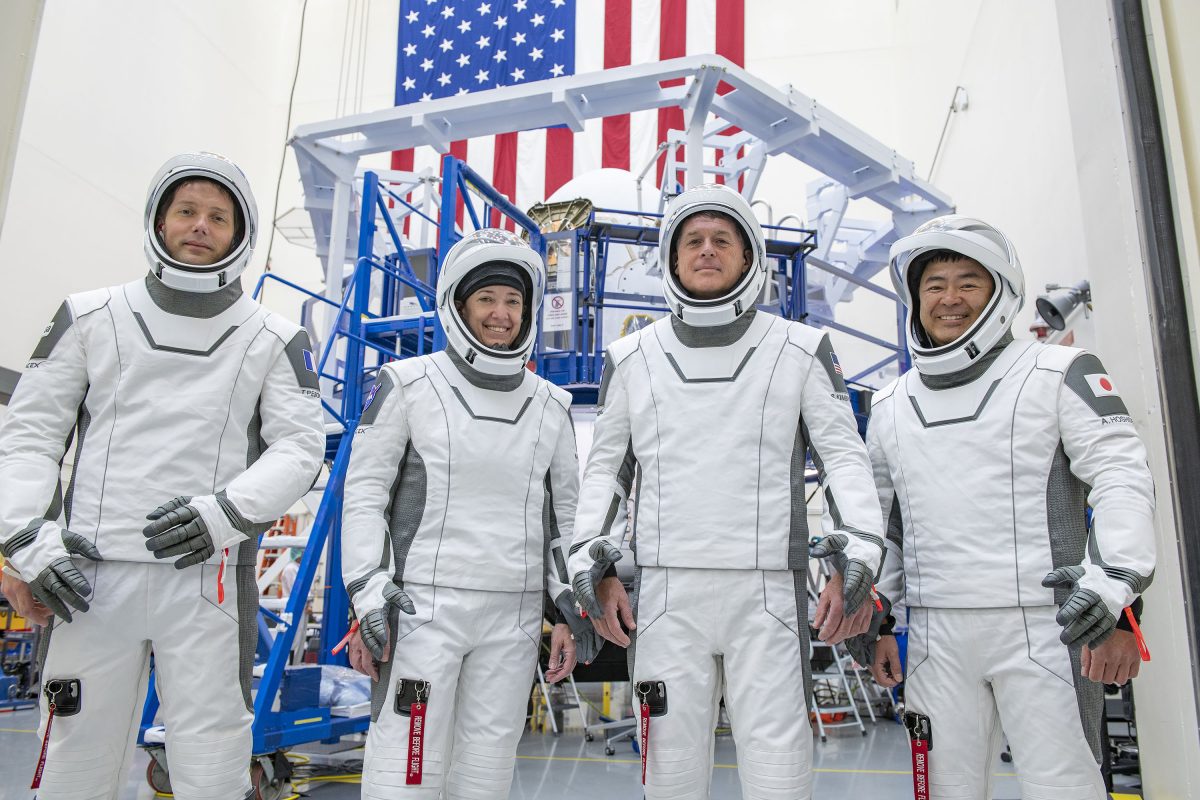 Like its all veteran crew, Dragon C206 has been to space before. It was named Endeavour by her first crew, Bob Behnken and Doug Hurley when it first supported the SpaceX Demo-2 mission in May 2020, returning the U.S.’s capability to launch crew to the International Space Station domestically.

Endeavour remained docked at the ISS for two-months before returning to Earth in August 2020. It successfully splashed down in the Gulf of Mexico and was recovered by SpaceX’s recovery ship GO Navigator.

Soon after it was taken to Port Canaveral, the capsule began refurbishment in preparation for Crew-2. Inspections were conducted to check nearly all parts of the spacecraft, during which it was found that the heat shield had slightly higher than expected erosion at the four points where the capsule and trunk were bolted together. A fix was implemented before the Crew-1 mission took place with Dragon Resilience.

Additional work was conducted on the craft’s hull, and valves inside that required replacement were swapped out.

Once refurbishments were finished, Endeavour was taken to a SpaceX processing facility at Cape Canaveral Space Force Station where it went through a test campaign of electromagnetic interference, acoustic, and systems verification. 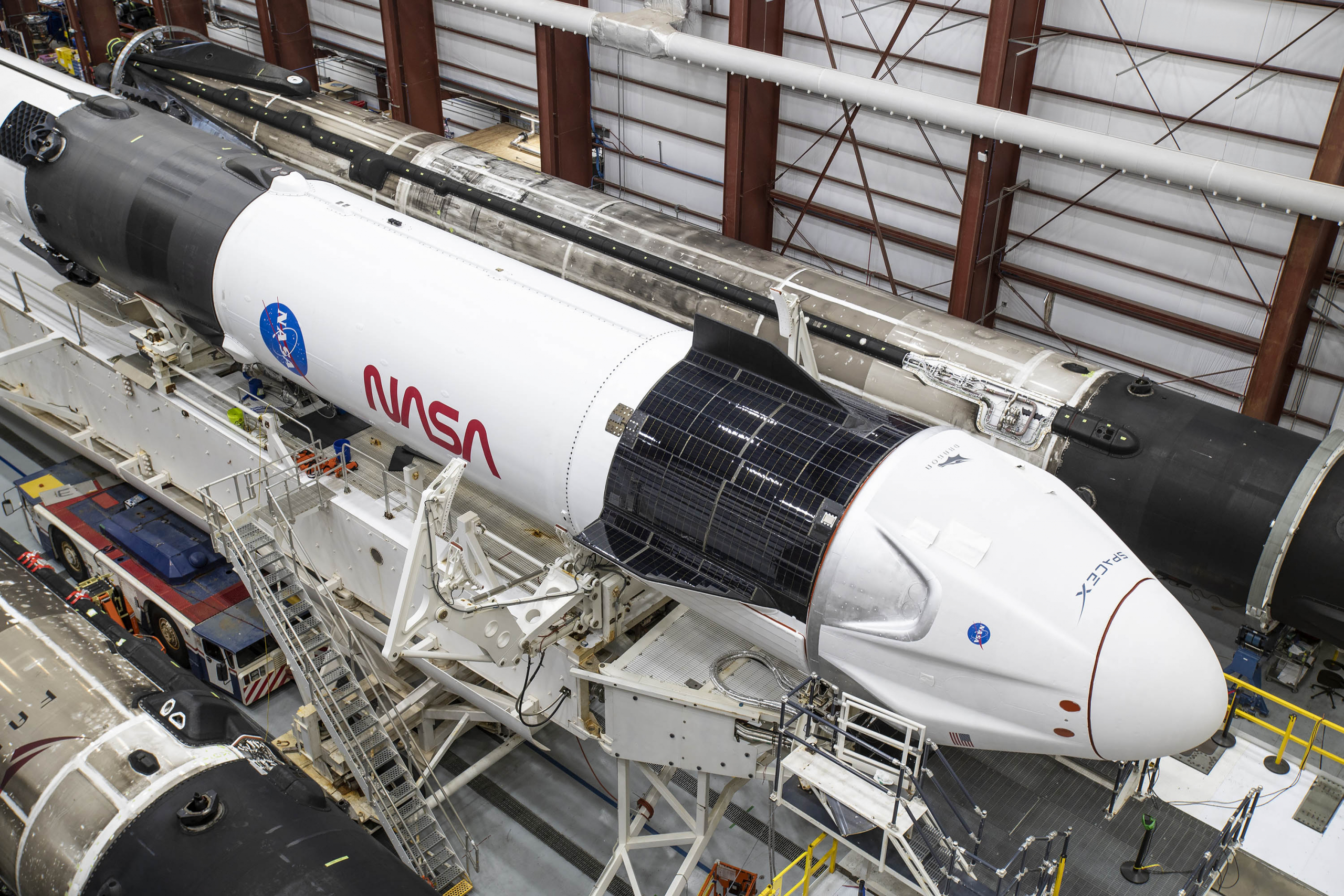 Soon, SpaceX will mate the capsule to a new unpressurized trunk section before moving the connected duo to the Horizontal Integration Facility (HIF) at LC-39A to be integrated with the Falcon 9 rocket, which includes first stage booster B1061-2.

B1061 is the second Falcon 9 booster to launch crew. It successfully supported the Crew-1 mission in November 2020 and has since been in storage undergoing refurbishments and inspections for the Crew-2 mission. The booster is currently in the LC-39A HIF awaiting Endeavour‘s arrival.

SpaceX is also working to configure LC-39A to support the crew mission, which is no the next flight scheduled depart from the pad.

Since Crew-1, 39A has supported a cargo resupply mission to the Station, a classified mission for the National Reconnaissance Office, and three Starlink launches.

To prepare the pad for crew, the service equipment on the Transporter Erector (T/E) requirements replacement to support Dragon instead of a payload fairing. The team will also verify that the ground support equipment can communicate with Dragon and its crew as well as Range Operations and Mission Control personnel.

Once all modifications are complete, the completed Falcon 9 and Dragon stack will be rolled out to the pad and begin a series of tests. This will culminate with a static fire, where the entire countdown is conducted without crew. 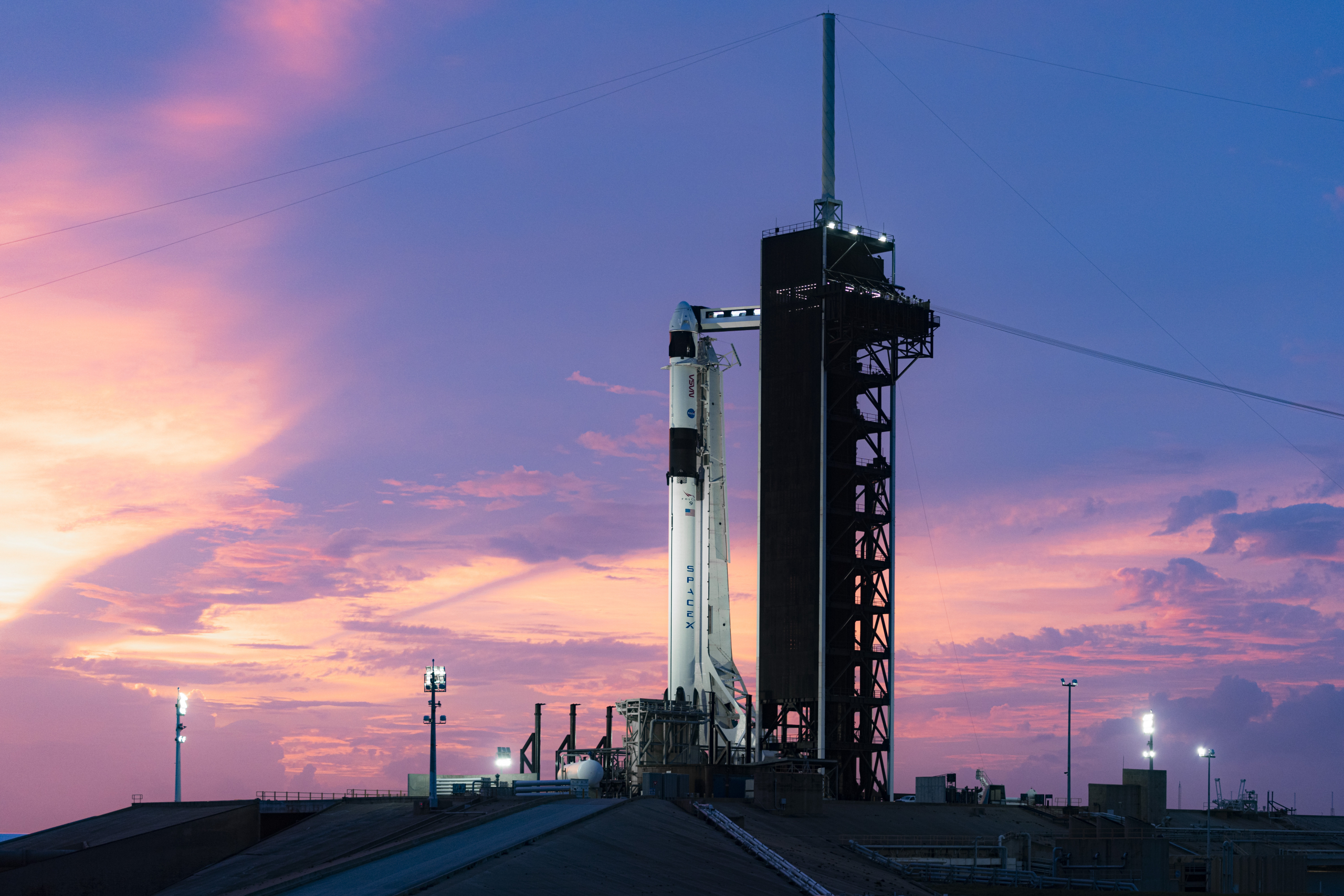 During static fire, the launch teams will work through a launch-day countdown, including fueling Falcon 9 and test firing all nine of its first stage engines for a few seconds. The crew will not be placed inside the Dragon for the static fire, which is currently set to take place on April 17, five days before launch.

Once the test is complete and all systems are checked out, the launch team and crew will practice launch activities without fueling the rocket. This will include suiting up, being transported to the pad, boarding Dragon, and going through a mock feuling and final countdown to the launch.

Launch and pad teams will practice procedures in case they should need to evacuate the launch pad in an emergency on launch day.

After this testing is complete, SpaceX and NASA will review all of the data at the Launch Readiness Review (LRR) on April 20. The Flight Readiness review, or FRR, will begin on April 15, a week before launch and before the static fire test.

The reviews will involve NASA, SpaceX, JAXA, ESA, and other personnel who will give final approval for the mission’s launch. 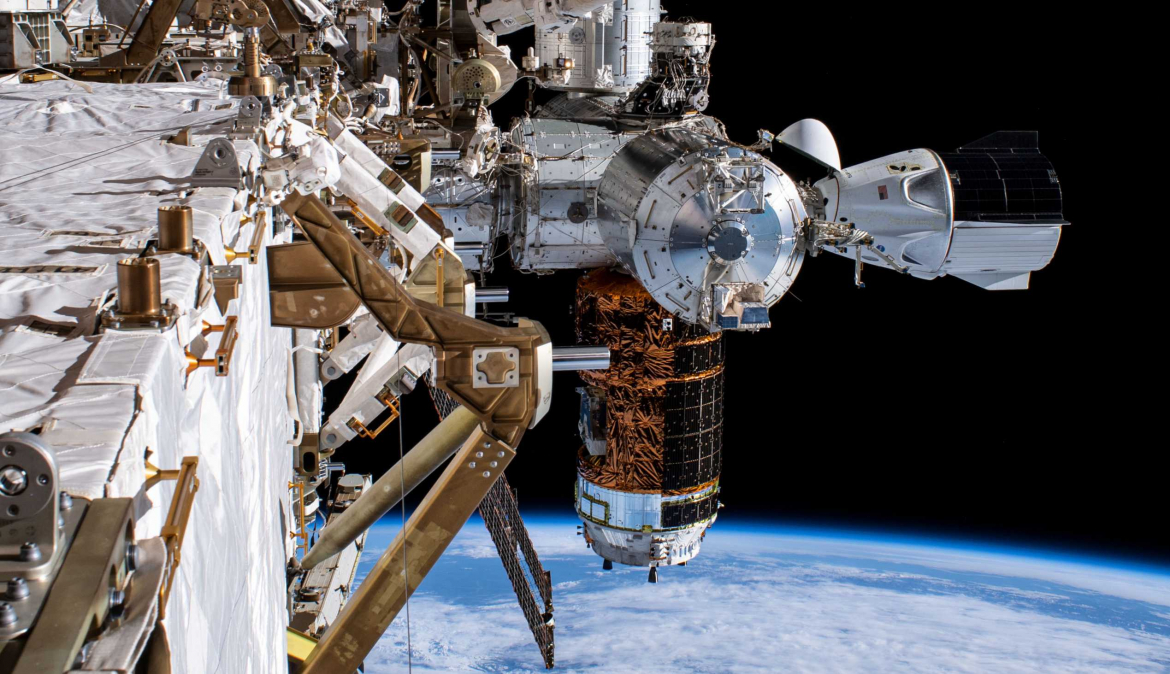 On launch day, the countdown will be nearly identical to the SpaceX Demo-2 and Crew-1 missions. The crew will begin suit up at T-4 hours before departing for LC-39A in two modified Tesla Model X vehicles.

At T-45 minutes, the SpaceX launch director will poll the team for a “go” to begin fueling operations. The Crew Access Arm will be retracted to the launch position and Crew Dragon’s SuperDraco abort system will be armed. The abort system will pull Dragon quickly and safely away from the Falcon 9 if an issue were to arise during fueling or launch.

As part of improvements to Dragon with Crew-2, a new modification to Dragon’s abort system has been made. SpaceX has changed the amount of propellant in the system to allow for a longer burn time to push the Dragon farther away during a possible pad abort.

Following a nominal launch, Dragon Endeavour will approach the ISS, performing an automated docking to the Forward port of the Node-2/Harmony module.

In preparation for Crew-2’s docking, Crew-1’s Dragon Resilience will be relocated from the Forward port to the Zenith port of Harmony on April 5. This will be allow a Cargo Dragon spacecraft to dock to the Zenith port once Resilience departs, enabling Canadarm2 to access cargo launched on the CRS-22 mission.

This excellent image from @RaffaeleDiPalma shows why Crew-1 Dragon needs to be relocated from the forward port of Harmony to the top port – so that Crew-2 Dragon can dock to the forward port, which will leave the top port clear when Crew-1 departs. (1/2) pic.twitter.com/DSjs3Mmz4i

Once docked, Dragon Endeavour and its crew will stay at the ISS for approximately six months. They will join the Expedition 65/66 crew, temporarily increasing the total ISS crew to 11 people, the highest since the Space Shuttle Program.

Once the handover is complete, Crew-1 will depart the ISS on April 28 after five months in orbit, bringing the ISS crew back down to seven.

Meanwhile, after successfully sending Dragon Endeavour on its way to space, Falcon 9 booster B1061-2 will land on one of SpaceX’s Autonomous Spaceport Drone Ships located ~560 km downrange in the Atlantic Ocean.

Once returned to Port Canaveral, the booster will be inspected and refurbished for another flight. Provided recovery is successful, B1061 will join the active booster fleet and begin supporting other missions, bringing the number of active flying boosters to six, alongside B1049, B1051, B1058, B1060, and B1063.