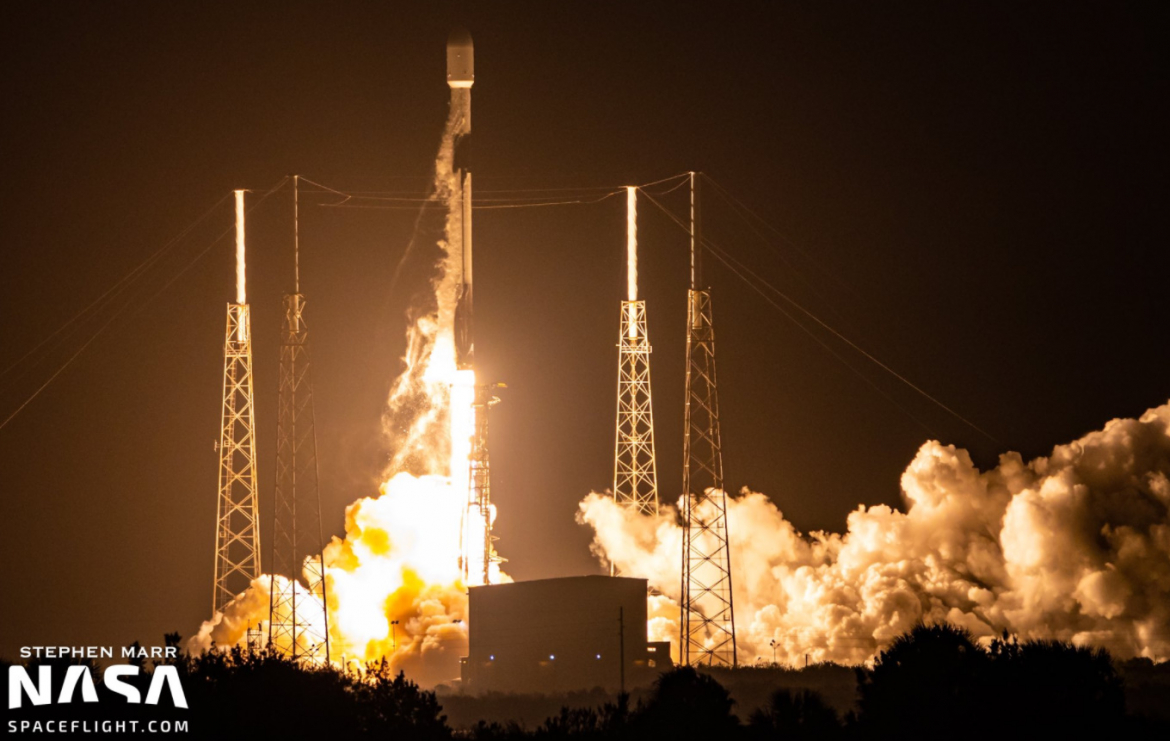 SpaceX launched the Starlink v1.0 L24 mission with another 60 satellites for the Starlink internet constellation late on Wednesday, April 28 at 11:44 PM EDT (03:44 UTC on April 29) from SLC-40 at the Cape Canaveral Space Force Station.

Just Read the Instructions, one of the Autonomous Spaceport Drone Ships (ASDS) that SpaceX uses to land their boosters at sea, was positioned about 600 kilometers downrange in the Atlantic Ocean. JRTI was towed from Port Canaveral by tug Hawk, but Finn Falgout had to make a quick turnaround and take over after Hawk suffered a mechanical issue. This likely led to the one day slip in the launch date, which was originally just after midnight on the morning of April 28.

Go Quest is supporting the booster recovery, and fairing retrieval vessel Shelia Bordelon will fish the two halves of the payload fairing from the ocean.

It looks like the recovery team of GO Quest, Finn Falgout and JRTI are in place for tonight's Starlink launch attempt. Meanwhile, tug Hawk which experienced mechanical issues while hauling JRTI out has almost made it to Jacksonville for repairs. #SpaceXFleet pic.twitter.com/jnwCnxmitN

The satellites were launched into an orbit of approximately 250 x 280 kilometers at 53 degrees inclination.  The flight profile included a brief second firing of the second stage engine about 45 minutes after liftoff, with the satellites released just over one hour into the flight.  On the SpaceX webcast, host Jessie Anderson mentioned during satellite deploy that some of the satellites on this launch have been painted white on the side facing away from Earth to help with thermal management.

This was the seventh flight of Falcon 9 booster 1060. This booster entered service in June 2020 with the GPS-III-SV03 mission. It has since launched four Starlink missions as well as Türksat 5A. Its most recent mission was Starlink v1.0 L22 on March 24, giving a fairly quick turnaround time between launches of just 35 days.

Progress on the initial deployment

That will leave about three or four more flights to fill the initial shell, which could be accomplished by late May or June.  One of those flights may take co-passengers to a higher (575 km) deployment orbit along with less than 60 Starlink satellites if the rideshare customer, Capella, can get their FCC license processed in the near future.

Starlink satellites by altitude during the month of April. Groups of satellites from recent launches can be seen rising into their operational positions – via Ben Craddock for NSF

After all of those satellites are launched, it will take several months for SpaceX to complete the initial constellation by drifting them to the proper locations and raising them to their operational orbits.  Once this is done, Starlink should have consistent coverage between approximately 57 degrees north and south latitude.

The network of gateways, the ground stations used to connect Starlink to the internet, also continues to expand as SpaceX has now applied for 55 gateways in the United States as well as locations in several other countries.

SpaceX continues to iterate on the software and hardware for their gateways and user terminals to add features and improve performance during the current beta testing period.  Elon Musk said in a recent Tweet “Service uptime, bandwidth & latency are improving rapidly. Probably out of beta this summer.”

Starting late last year, the satellites were lowered a few kilometers from the initial 550 km altitude and rearranged into planes with 18 active satellites, with any additional satellites being spares.  There are still a few small gaps in the initial 36 planes which are being filled as more satellites are launched.  With hundreds of satellites from launches as far back as January still drifting to their final positions, the coverage will steadily improve over the next few months.

Starlink satellites arranged within the 550-km shell. Each of the vertical rows is one of the 72 planes. In some planes spare satellites can be seen closely shadowing one of the 18 active satellites – via Ben Craddock for NSF

In an April 2020 filing with the FCC, SpaceX requested a modification to the layout of the Starlink constellation which lowered the altitudes of the remaining satellites, adjusted the orbital inclinations, and lowered the angle above the horizon at which ground stations were permitted to communicate with the satellites. After a very contentious proceeding in which many of their competitors objected to the changes, the FCC approved the modifications with few conditions on April 23.

The FCC ruling noted that the while the modifications would alter the interference environment between Starlink and other constellations, the overall interference would not be significantly worse and coordination between the constellations could mitigate the changes. SpaceX agreed to accept some increased interference into their ground stations caused by the changes, avoid overlapping beams from multiple satellites at some frequencies to stay within allowable power transmission limits, and keep their satellites below 580 km in altitude to eliminate potential overlap with the Project Kuiper constellation.

The FCC also noted that even the fairly low failure rates of satellites in such a large constellation remains a concern, and required SpaceX to submit reports semi-annually on satellite conjunctions, avoidance maneuvers, reentries and failures. SpaceX is also required to submit a report any time going forward that three satellites in a 12 month period lose maneuverability above the deployment orbit, leading to increased collision risk.

Now that the FCC ruling is complete, SpaceX can move on with the deployments of their remaining satellites.

With completion of the initial 53 degree shell imminent, SpaceX will have three different inclinations to fill with the remaining 2,800 satellites.

More launches into the 10 planes of the 97.6 degree Sun Synchronous Orbit inclination are expected to take place starting in the second half of this year.  These satellites will provide coverage over polar regions and include laser inter-satellite links that allow coverage over areas with no ground gateways.

As reported by SpaceNews, SpaceX president Gwynne Shotwell, speaking at the April 14 SpaceTech conference by the Massachusetts Institute of Technology’s Department of Aeronautics and Astronautics, said that SpaceX has flown two generations of laser inter-satellite links and is getting ready to fly a third generation that is much less expensive and higher performing in the next few months.

Some of these flights are expected to take place from the SpaceX launch site at Vandenberg Air Force Base in California.  Recent job postings for recovery personnel on the west coast, as well as this week’s news that SpaceX is leasing space in Long Beach Harbor to host west coast booster recovery operations, suggest SpaceX is preparing to resume ASDS operations in the Pacific Ocean.  Drone ship landings will be required for the heavy stacks of Starlink satellites.

The remaining 1,584 satellites at 53.2 degrees inclination will effectively double the density of the initial shell, providing more satellites in view and enabling more customers to be served.

On April 25, OneWeb completed the sixth of 19 launches on Soyuz rockets, with another half dozen scheduled from Vostochny and Baikonur this year. They now have 182 of 648 satellites in orbit and intend to start service above 50 degrees north latitude late this year.

OneWeb continues raising the remaining funds needed to complete the first generation constellation. On April 27, it was announced that Eutelsat is investing $550 million for a 24% stake in OneWeb, bringing OneWeb within about $500M of the amount needed.  OneWeb plans to focus on providing services for telecom providers, businesses, governments, and mobility applications.  They do not currently plan to serve individual consumers.

On April 19 it was announced that Amazon’s Project Kuiper, planned to have approximately 3200 satellites, has contracted for nine flights on Atlas V launch vehicles from ULA.  Project Kuiper is planning to launch test satellites in 2022, and may be a more direct competitor to Starlink as they are developing user terminals that could serve individual households.

Canadian satellite operator Telesat announced in February that they had contracted with Thales Alenia to construct the satellites for their LEO constellation of 298 satellites with laser inter-satellite links, named Lightspeed, contingent on Telesat finalizing financial arrangements.  Telesat continues to work on their financial plans, with a combination of equity, debt, and possibly funds from ceding rights to some C-band spectrum in Canada being used.

On April 27 Telesat announced the issuance of $500 million in bonds to be used for the Lightspeed constellation.  Telesat will be targeting similar markets as OneWeb, providing service to households through existing telecom providers rather than directly.