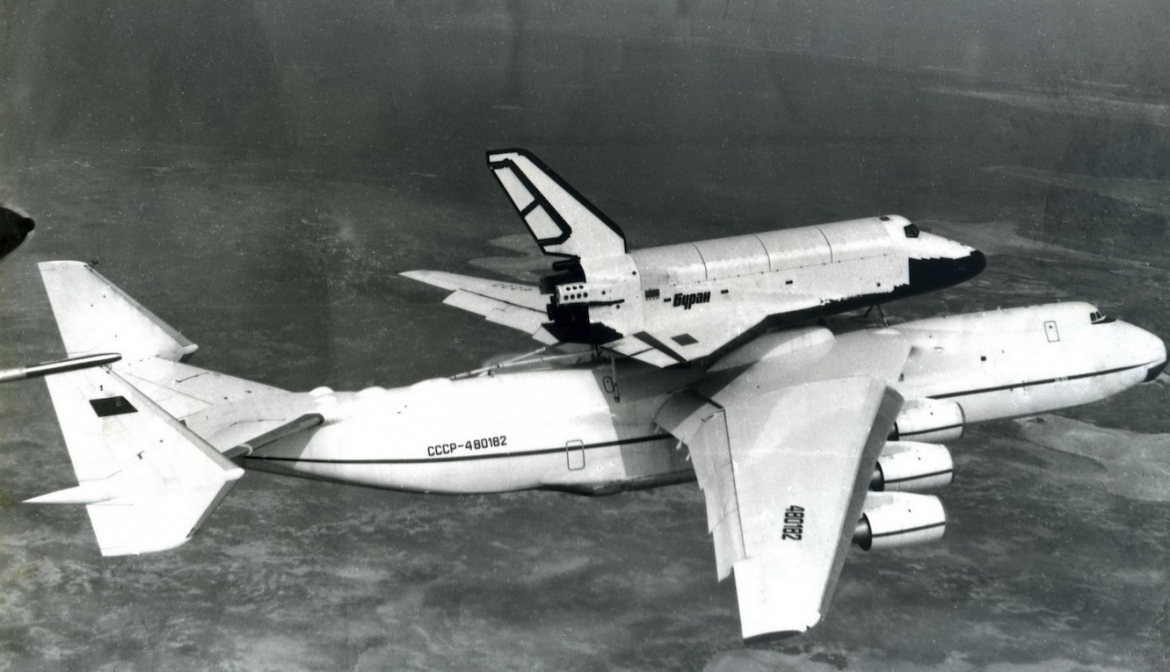 After the latest incident at Baikonur where a group of street artists painted graffiti on the Buran 1.02 space shuttle, named Burya, Roscosmos expressed its concern about the fate of the unique remnants of the Energia-Buran program stored at the spaceport and has expressed a desire to discuss this issue at the next meeting of the Intergovernmental Kazakh-Russian Commission on Baikonur.

Roscosmos has also once again expressed a belief that the remaining Buran hardware at Baikonur, owned by a private company, should be transferred to a space museum for proper care, security, and display.  However, since those initial proclamations Wednesday, it has come to light that Roscosmos may have known of the graffiti incident back in April but decided to say nothing and simply paint over it.

So how did it happen that the unique “Soviet shuttles” came to be forgotten in a poorly guarded hangar for so many years?

When the Energia-Buran program ended, there were a few flight models of Buran shuttles in various stages of build, including the Buran 1.01 — which performed the program’s first and only orbital flight in 1988 — and the Buran 1.02, Burya, which was 95% complete.  There were also several technical mockups of Buran and some flight models and mockups of the Energia launch vehicle.

The Buran 1.01 orbiter met an unfortunate fate in 2002 when it was destroyed due to the collapse of the hangar roof of the MIK building at Site 112 at Baikonur where it was stored.

The Telegram channel “Forgive us, Yuri” posted photos of the #Buran 1.02 aka Burya that was painted with graffiti at its storage place on Baikonur. Another reminder that it should be put on display in a museum, before something worse happens to it. https://t.co/NaQAAPhoiw pic.twitter.com/izvh8VgnrZ

Not all Buran orbiters met such a fate.  Buran 2.01, named “Baikal”, was about 30-50% complete but had not yet been delivered to Baikonur.  It was stored at the Zhukovsky airport and was exhibited at the MAKS air show.

However, Buran orbiters 2.02 and 2.03, which were in the early stages of assembly, were disassembled and destroyed.

Of the models, the OK-TVA model, which was used for thermal-acoustic tests, remained in Russia after its use. At first, it was exhibited in Gorky Park but was recently moved to VDNH where it was turned into a small museum for children..

The OK-KS mockup, which was located at RSC Energia for some time, was later transferred to the Sirius educational center near Sochi.  Another mockup of Buran is located in the Baikonur museum, and two more are owned by the industrial companies that were worked on the Buran program.

But the history of the near-flight-ready Buran 1.02, aka Burya (the English-speaking community also calls it Ptichka, which means “a little bird”), and the OK-MT mockup, which was used for pre-launch operation tests, have been different.

The first flight of Burya was scheduled for the 4th quarter of 1991.  It was supposed to automatically dock with the Mir station, where it would be visited by a crew.  After that, an automatic landing was planned.  However, in 1990, the Energia-Buran program was suspended, and in 1993 it was closed.

Following the program’s end and the collapse of the USSR, both Burya and OK-MT remained at Baikonur, which was now the territory of the independent nation of Kazakhstan.  Unlike Buran 1.01, which became the property of Kazakhstan, Russia retained ownership of Burya and OK-MT initially. 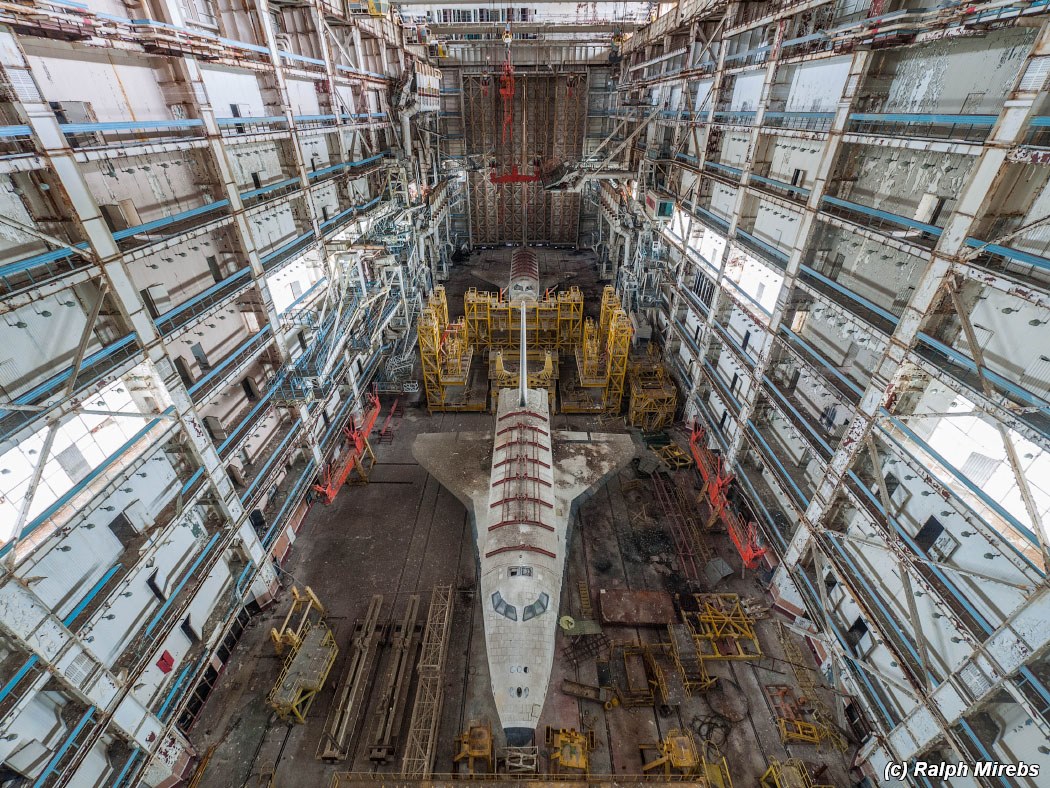 The Buran 1.02 and OK-MT mock-up at Baikonur. (Credit: Ralph Mirebs)

However, due to legalities, a subsidiary of RSC Energia, named NTTs-12Ts CJSC Energia, was created to manage the whole property of RSC Energia at Baikonur — which included Burya and OK-MT.  In 2004, the company transferred the two Buran vehicles to RSE Infrakos, which in turn turned them over to the Russian-Kazakh company JSC KRISP Aelita (in which RSC Energia was one of the founders) in 2005.

In 2011, the company’s shares were bought by the Kazakh entrepreneur Dauren Musa, according to Russian media reports at the time, and the company was renamed RSC Baikonur.  Thus, Burya and OK-MT, as well as the mockup of the Energia rocket, which also belonged to Aelita, became the property of a private Kazakh company.

All this time, both ships were stored in the MZK – an assembly and refueling complex which was intended for servicing the ships between flights.  Over the past 30 years, both ships have been thoroughly looted, though authorities cannot say by whom or when exactly the events took place.

Usually, the condition of the ships is updated when photographers have illegally entered the complex to document their condition, not vandalize them.

Some of these pictures have shown torn panels, removed and missing wires, and the broken glass of Burya’s cabin windows.  Due to the lack of maintenance, both ships are covered with a layer of dust and guano, but the hulls have generally remained intact.

Burya and OK-MT once again came into discussion in November 2020 on the anniversary of the only Buran flight when Dmitry Rogozin was asked on Twitter if it was possible to move the remaining Burans to the Museum of Cosmonautics in Kaluga.

Rogozin replied,  “I tried to take it back, buy it back, but I haven’t been able to figure out who owns it yet.”

The owner, Dauren Musa, soon came forward.  In response, Rogozin expressed his concern about the condition of the ships and promised that the representatives of Roscosmos would contact Musa to discuss their fate.  The government of Kazakhstan also expressed interest in the ships at the time, and court proceedings eventually settled the ownership matter in favor of the private company owned by Musa.

It isn’t known whether any action was taken by Roscosmos after that point in terms of acquiring the Buran hardware, but no further news about Burya and OK-MT was known until 26 May when photos of Burya, vandalized with graffiti, appeared on Instagram and Telegram that morning (UTC).

The photos quickly spread, igniting outrage and concern on social media about security at Baikonur as well as the need to preserve these vehicles of Soviet space history.

Roscosmos was quick to express its concern about outsiders walking around the guarded property and sneaking into the MZK, and the organization stated an intention to discuss the issue of preserving the vehicles at the next meeting of the Intergovernmental Kazakh-Russian Commission on Baikonur.

The RIA Novosti Telegram Channel reports that, according to their source in the space industry, the graffiti on #Buran 1.02 was painted in April, and "it has been already painted over": https://t.co/oFybWhh7Yh. If this information is true, I have two questions to Roscosmos: ⤵️ pic.twitter.com/XY6ZB71AJt

According to Roscosmos’ press office, the organization intends to insist on the transfer of ownership to a cosmonautics museum or museums.

However, information then appeared in the Telegram channel of RIA Novosti that the graffiti was drawn back in April and has already been painted over — an indication that Baikonur, and likely Roscosmos, were well aware of the vandalism but chose to remain silent and not use the opportunity of its discovery to publicly insist on ownership transfer.

Despite their actions of vandalism, perhaps the graffiti artists have benefited Burya and OK-MT by drawing attention once again to the last remnants of the Energia-Buran heritage that has so far been forgotten and left to slowly rot in an abandoned hangar in the middle of the Kazakh steppe.