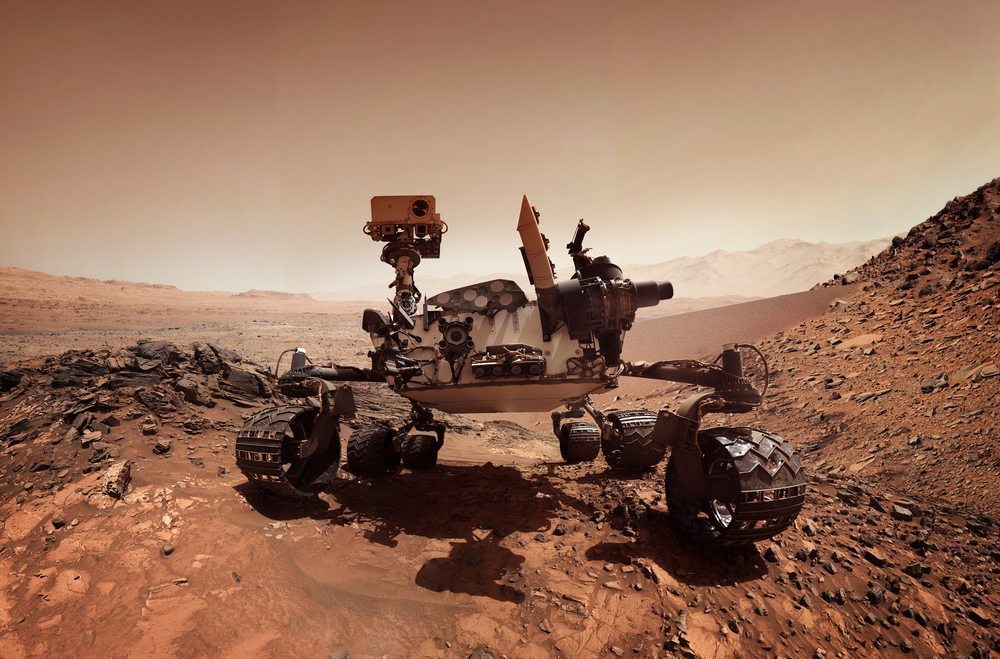 While organic compounds have been confirmed on the Martian surface and near-surface areas since 2018, new Earth-based experiments point to a potentially tantalizing series of signatures from Curiosity’s Sample Analysis at Mars (SAM) instrument that could indicate the presence of organic salts at the rover’s Gale Crater location.

What’s more, the new research from a team led by J. M. T. Lewis, an organic geochemist at NASA’s Goddard Space Flight Center, points to further potential evidence that organic salts might be prevalent across the Martian terrain. The hard part is conclusively detecting them.

For decades, scientists theorized that organic compounds were almost certainly to have been preserved to some detectable degree in the Martian surface environment. In 2018, Curiosity’s instruments allowed Eigenbrode et al. to conclusively prove that they were in fact there.

In turn, if organic compounds were present at one time, their by-products — organic salts — would still be around as well, even given the harsh radiation environment of Mars compared to Earth.

While organic compounds and organic salts can form from the presence of microbial life, they can also form from geologic processes.

Though not confirmed, organic salts would be further evidence that organic matter once existed on Mars’ surface, and, if they are still present, could support hypothetical microbial life on Mars today, as some life on Earth uses organic salt as food/energy.

Salty puzzle piece.🧂@NASA has found that organic salts are likely present on Mars & I may be able to detect them. They're the chemical remnants of organic compounds that may provide important clues to the planet’s carbon cycle and potential for past life. https://t.co/EaGHUoGqTi pic.twitter.com/nSZVDhewBY

The analysis on potential organic salt detections and Earth-based lab work from Lewis et al. centered on Curiosity’s SAM instrument — a chemistry instrument suite inside the rover composed of a mass spectrometer, a gas chromatograph, and a tunable laser spectrometer.

According to NASA, SAM is designed to “address the present and past habitability of Mars by exploring molecular and elemental chemistry relevant to life. SAM addresses carbon chemistry through a search for organic compounds, the chemical state of light elements other than carbon, and isotopic tracers of planetary change.”

In practice, SAM takes surface soil and drill samples and places them inside an oven that is then heated to around 1,000° C to extract gases. The temperature at which gases are released from the sample reveal what elements it is comprised of.

But when it comes to organic salts, it’s not that simple.

“When heating Martian samples, there are many interactions that can happen between minerals and organic matter that could make it more difficult to draw conclusions from our experiments, so the work we’re doing is trying to pick apart those interactions so that scientists doing analyses on Mars can use this information,” said Lewis, lead author of the study published in the Journal of Geophysical Research: Planets.

In short, the gases released by organic salts are difficult to pin directly to them because those types of salts only release simple gases that other common components of the Martian soil release as well.

But why are organic salts so important?  Why try and see if they’re there at all in the SAM record from Curiosity?

“In our efforts to characterize indigenous Martian organic matter, we must contend with a near-surface record that has been substantially altered by radiation and oxidation,” notes an opening section in Lewis et al.’s paper. “Under such conditions, much of the surficial organic record on Mars may have decomposed into organic salts, which are challenging for flight instruments to conclusively identify.”

“If organic salts are widespread on the Martian surface, their composition and distribution could offer insight into the less-altered organic record at depth, and they may play an important role in near-surface carbon cycling and habitability.”

To this end, finding them conclusively — or at least building a case for where the Martian robotic fleet might have detected them — would be of crucial importance toward building a more grounded understanding of Mars’ past and present habitability.

So what did Lewis et al. find?

Like the now-true prediction that organic compounds existed on the Martian surface or near-surface area, for decades scientists have predicted that those now-known organic compounds could be broken down into salts.

Those salts would be far more likely to survive in large quantities than organic molecules belonging to living organisms. So finding them is key.

But this returns us to the original problem: organic salts release very common gases when exposed to the 1,000° C heat in SAM. So if the salts are indeed there, how could one point to their potential detection within common gases? 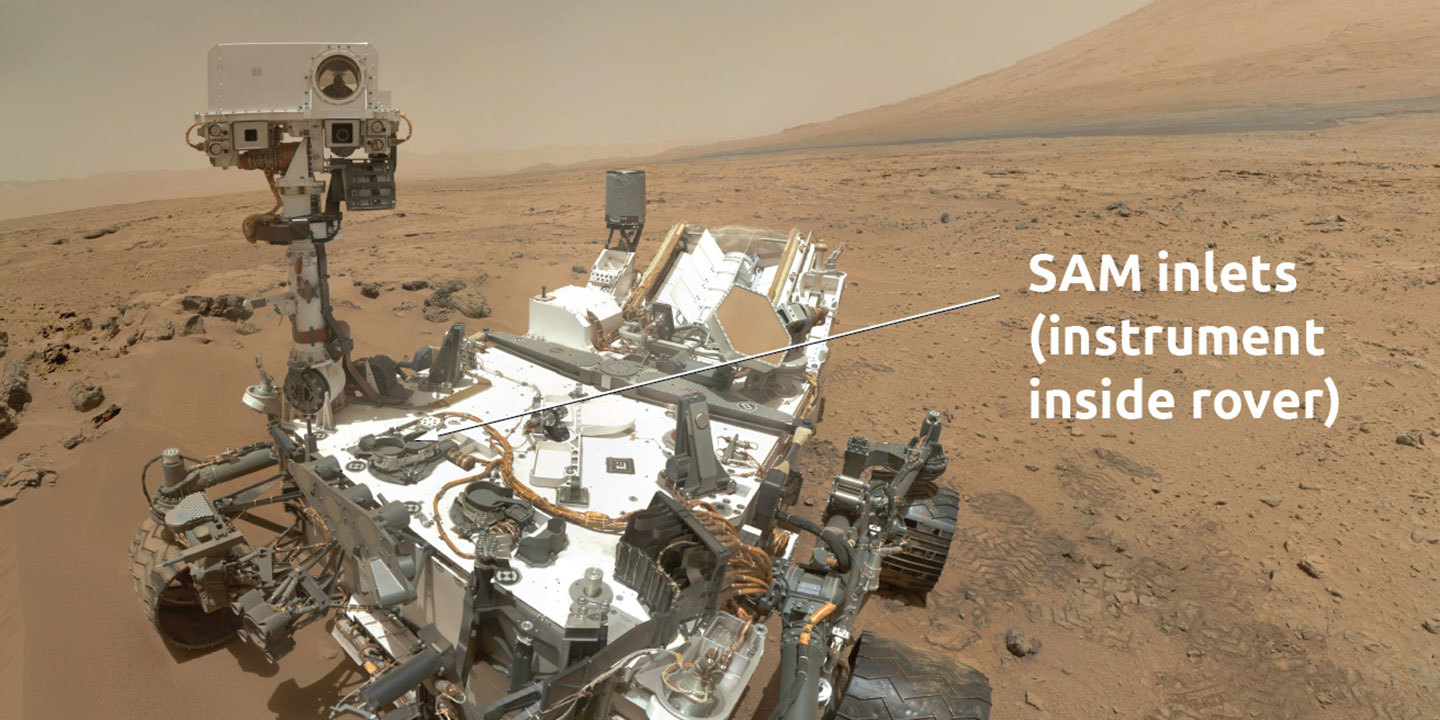 The answer turned out to be related to a long-held concern about organic salt detection: perchlorates.

Perchlorates are salts containing the ion ClO4. They are common on Mars, and scientists had long been concerned with how perchlorates would affect the potential detection of organic salts. The Lewis et al. research was largely aimed at understanding that effect, but in so doing, found very strong, potential indirect detections of organic salts in SAM data.

According to a portion of the results section of Lewis et al.’s paper regarding analysis of SAM data on various samples (RN4, GB, and OG3) compared to the team’s lab mixtures: “The CO2 peaks generated by our mixtures of Ca or Mg acetate [organic salts] with perchlorates were a closer fit with the 380° C peak in RN4. The CO2 peaks observed between ~400° C and 500° C in GB and OG3 were consistent with the decomposition of a mixture of Ca acetate, Mg acetate, and Mg oxalate, and perchlorates.”

“If Mg oxalates and Ca or Mg acetates were significant CO2 contributors in GB and OG3 it would suggest that a unit with appreciably high levels of these phases exists somewhere within Gale crater. If such a unit can form at one locality on Mars, it is likely that organic salt deposits could occur elsewhere on the planet.”

The referenced “mixtures of Ca or Mg acetate” relate to the experiment at hand, where Lewis et al. mixed organic salts (Fe, Ca, and Mg oxalates and acetates) with perchlorates that are known to be present in the Martian soil.

But how to be sure?

Thankfully, Curiosity’s CheMin instrument — Chemistry and Mineralogy — is capable of making such a detection if the organic salts are in high enough concentrations. Sadly, it has made no such detections.

Additionally, neither Perseverance nor any other surface robotic mission aside from Curiosity carries instrumentation to permit organic salt detections. Still, even if a positive identification proves elusive, going deeper under the Martian surface where soil and organic material would be better preserved is an area of Martian exploration deep into planning.

The European Space Agency’s ExoMars rover, slated to launch in 2022, will carry a drill developed by NASA Goddard that can burrow down 2 meters beneath the surface.