Laying the groundwork for Super Heavy amid Raptor Ramp Up 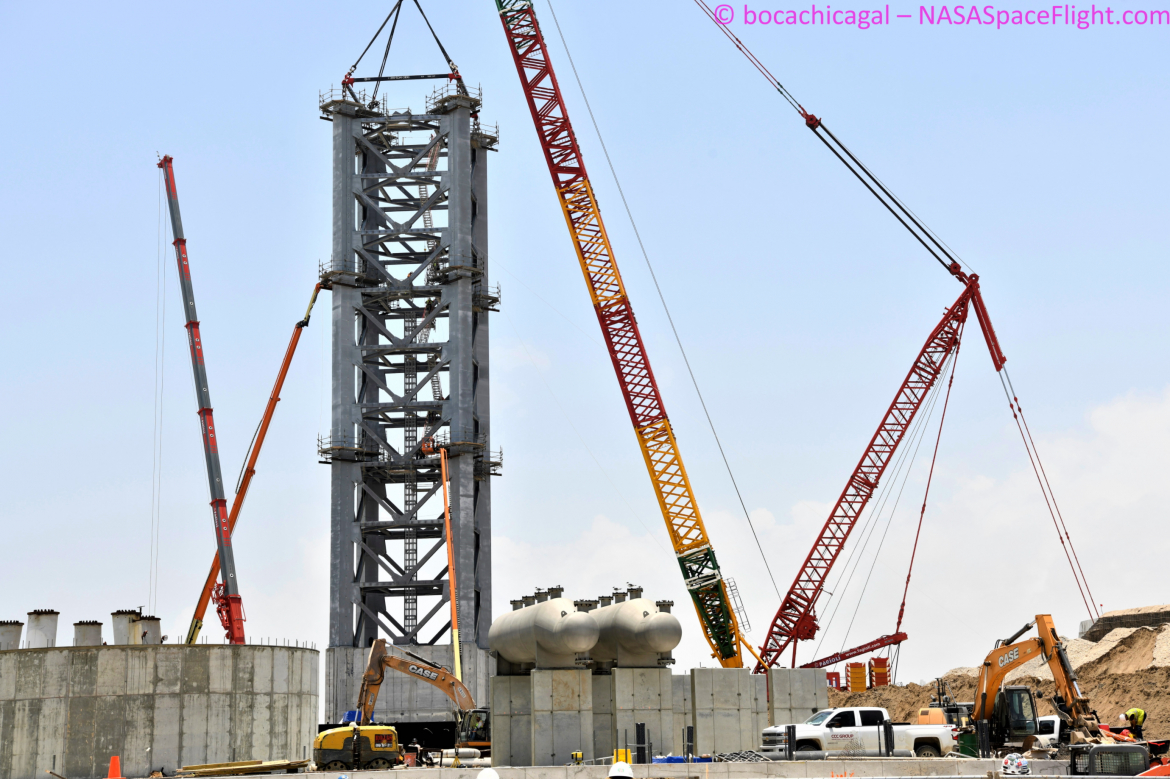 Just one year after losing Starship SN4 after a Static Fire test, SpaceX’s progress at its Starbase site in South Texas has allowed the company to focus on the debut of its Super Heavy booster. With Starship SN15’s successful landing appearing to conclude the high altitude hop tests, the vast majority of preparation work is focused at the Orbital Launch Site (OLS), while BN3 (Booster 2) stacking continues as key elements of booster hardware arrive on site.

With Super Heavy now set to launch with 29 – and later with 32 – Raptors, the demand for the Methalox engine will be catered for by an increased production rate and additional test capacity.

The Transition from Hops to Orbital Tests:

Test launches from Boca Chica began less than two years ago, with Starhopper achieving the first flight to 150 meters under the power of Raptor SN6. This success allowed SpaceX to move into the test program with its prototype Starships.

It was just one year ago this weekend (May 29) that SN4 appeared to pass through its Static Fire test campaign, only for a post-firing quick disconnect failure to put pay to the vehicle as it exploded on the launch mount.

The progress since then has been extraordinary, with SN5 and SN6 both completing successful 150-meter hops before SN8 launched the first high altitude test, along with the major test objective of a controlled “bellyflop” return.

SN11 also suffered an engine issue, causing it to explode during the landing burn flip, although modifications were already in the pipeline for the next vehicle, SN15. Starship SN15 completed all the test objectives, including a smooth touchdown on the landing pad.

Although Chief Designer Elon Musk has yet to officially note the retirement of Starship SN15, following a previous comment the vehicle could refly, SN15 has since rolled back to the Production Site and is expected to be prepared for display. The three Raptors that were involved with SN15 were also preparing to ship out of Starbase on Sunday.

Starship SN16 is also waiting for its fate, having been sat in the High Bay with no final processing taking place that would have seen it readied for rollout.

Concluding the Starship high altitude tests via SN15’s success allows for a focus on the next major milestone of pushing the vehicle into space.

This test objective had already been cited in documentation as involving Super Heavy BN3 and Starship SN20 “with a goal to get to orbit by July 1”. While that date will be ruled out by the huge amount of groundwork required to be in a stance to launch, the potential of such a test flight before or around the Fall would be a massive achievement.

All the elements are currently in play, with sections of Starship SN20 – should that be the vehicle to conduct the test – already spotted several weeks ago by Mary (@bocachicagal), along with the BN3 sections that are now being stacked behind SN16 in the High Bay.

A photo of the duo was tweeted by Musk, citing the Super Heavy as “Booster 2”.

With BN1 fully stacked as a pathfinder before being dismantled, BN2 and BN2.1 sections were classed as test sections and were never set to become more than test tanks, as opposed to fully stacked Super Heavy vehicles. The BN2.1 Test Tank is currently residing in the Mid Bay.

As such, BN3 will be the second Super Heavy to be fully stacked in the High Bay, likely resulting in Musk calling it “Booster 2”.

The complete Super Heavy Starship stack will reside at the OLS instead of the suborbital site utilized during the initial test program.

As with most of the facilities at Starbase, construction has proceeded at pace, highlighted by the raising of the Launch Integration Tower.

A third section was added to the tower this past week, with several additional prefabricated sections yet to be added. The tower will eventually become the tallest structure in the South Padre Island region.

On the Ground Support Equipment (GSE) side, numerous commodity tanks have already been installed at the Tank Farm that will supply Super Heavy and Starship with Liquid Oxygen (LOX) and Liquid Methane (CH4).

Some of these tanks are constructed from the same stainless steel rings used to assembly Starships, with the first of the cryo tank shells arriving at the launch site to cocoon the tanks with insulation for the cryogenic fluids in the GSE tanks, with gaseous nitrogen used as insulation between the two tank layers.

Additional tankage arriving at the OLS includes the GSE that will be utilized to provide subcooling, vaporization, and recondensing during propellant loading operations. 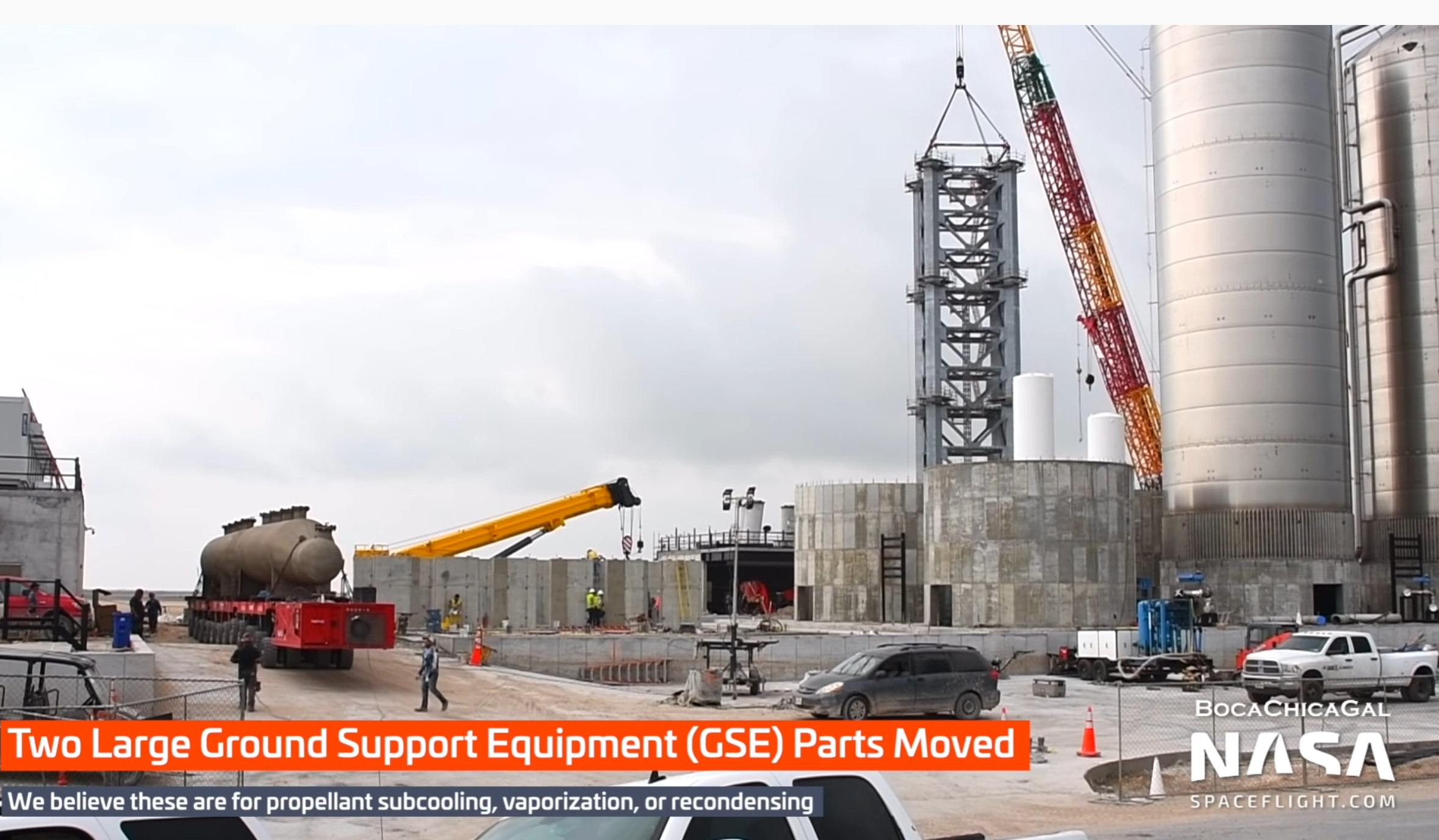 These new arrivals are taking place amid a large effort to lay the groundwork for additional structures.

Notably, the OLS is set to further expand in the future, with plans showing that two Launch Integration Towers and two Landing Pads will cater for what is expected to be an ambitious launch cadence.

With at least the first test flight of Super Heavy and Starship set to splashdown, as opposed to a return to a landing site, a large stock of Raptor engines will be required before the engines are expected to return with their vehicles for future flights.

Super Heavy will now host 29 engines on its aft, as observed via a photo of a new Thrust Puck arriving at Starbase on Friday via Mary (@ bocachicagal) and then confirmed by Musk on Twitter. He added that Super Heavy would eventually evolve to hosting 32 engines.

29 Raptors on Booster initially, rising to 32 later this year, along with thrust increase per engine. Aiming for >7500 ton thrust long-term. T/W ~1.5.

Raptors are then shipped to SpaceX’s Test Center at McGregor in Texas, where they are test fired to validate the engines ahead of being sent to the South Texas launch site. 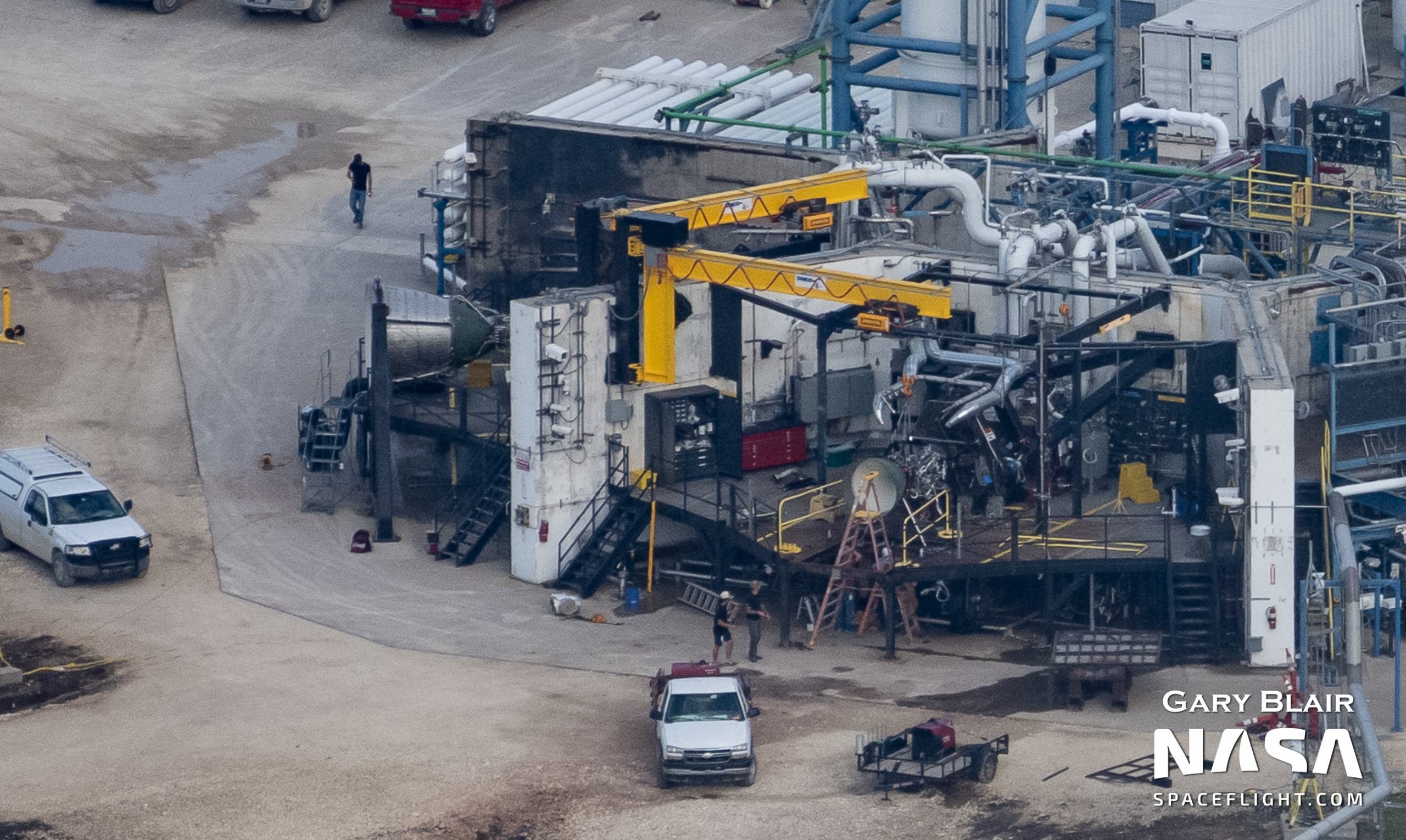 During his latest fly past, photos from NSF’s Gary Blair in the L2 McGregor section spotted Raptors in all three bays, including what appears to be another new RaptorVac engine.

Increased test cadence will be supported by the addition of two additional bays in a new test stand that resides next door to the current horizontal test stand. It is understood that along with these two new vertical test bays, McGregor could support one Raptor engine validation firing per day. 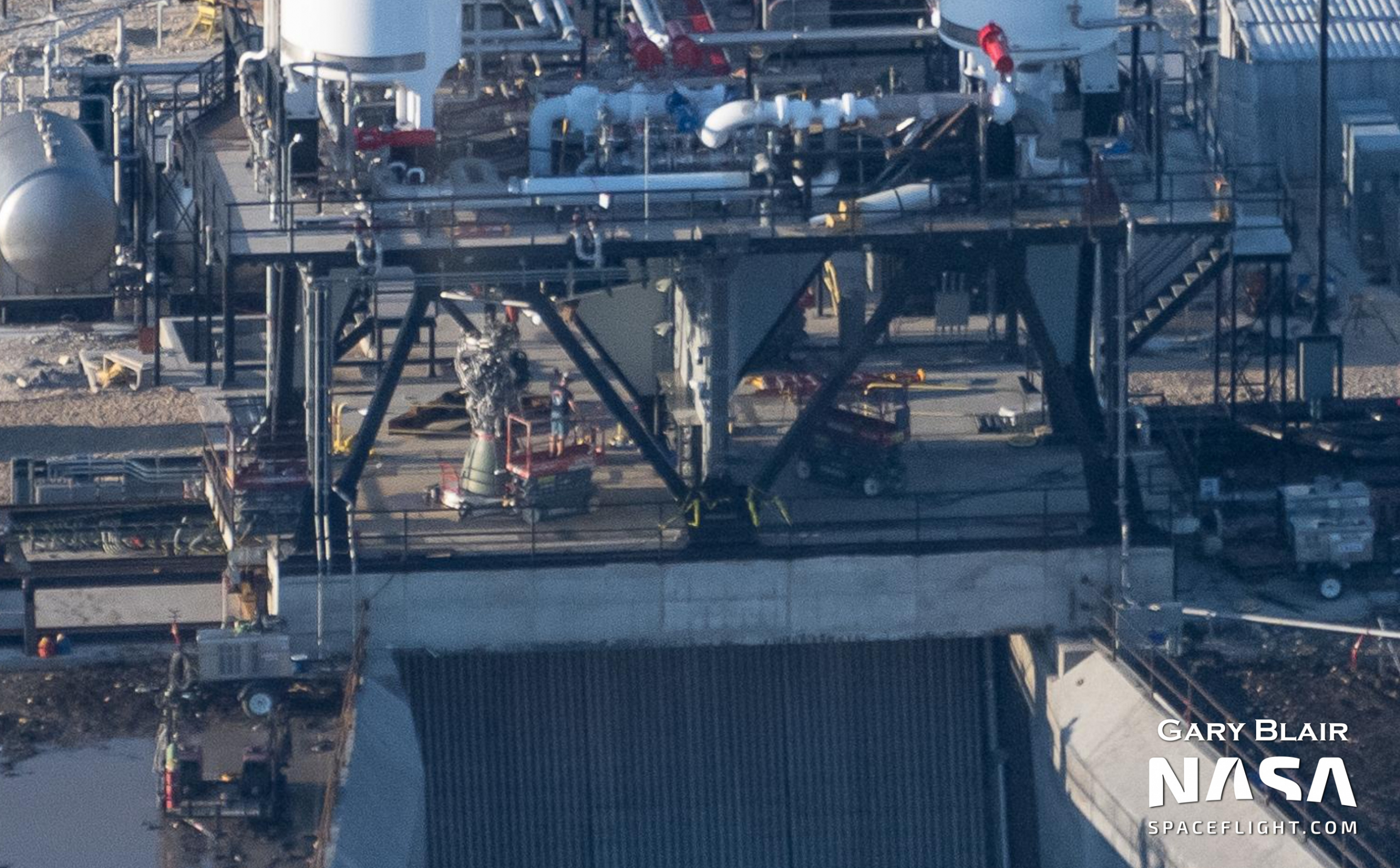 The new stand appears to be close to hosting its first Raptor firing, with one engine spotted in one of the bays, likely to allow fit checks to be conducted.

There’s no doubt that 2021 has seen some incredible progress made on both the vehicles and facilities, and while test flights may be on hold for the moment, progress will not slow down as SpaceX continues to build up its Boca Chica launch site ahead of the first orbital flight attempt targeted for later this year.