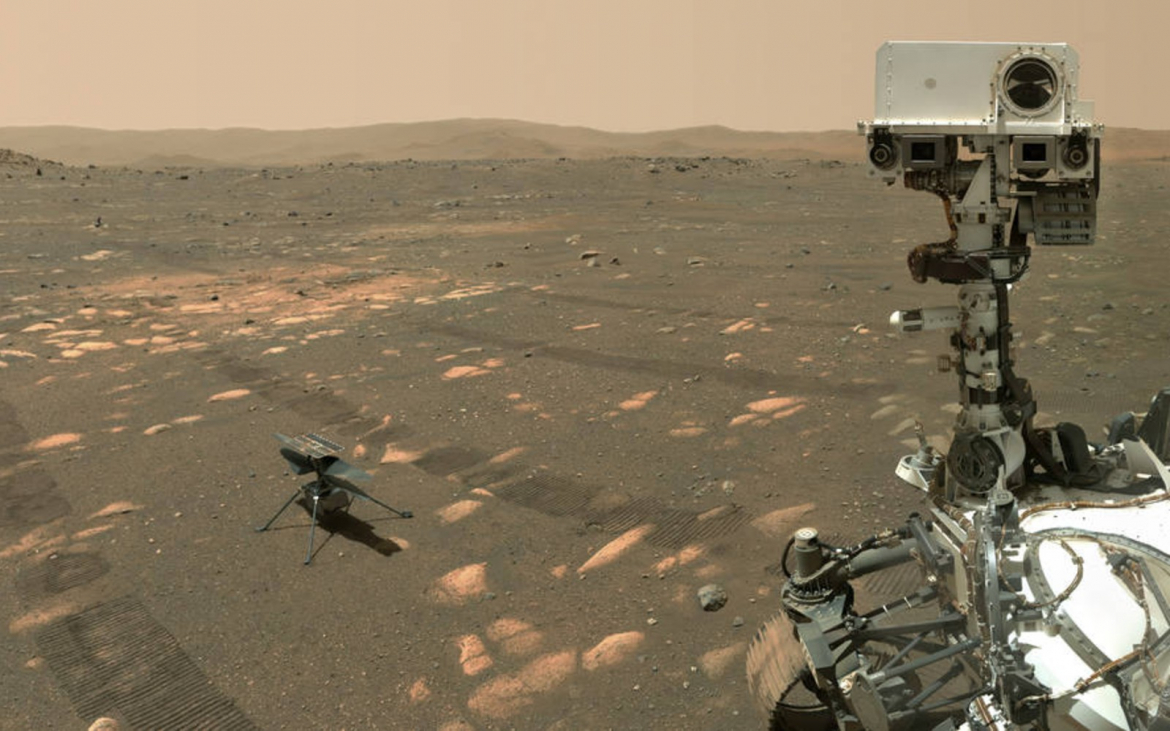 Nearly three months after landing on Mars, NASA’s Perseverance mission is marking its initial science returns from the Martian surface as the Ingenuity helicopter enters its new phase of operational demonstration flights on the Red Planet.

Ingenuity’s flight will gather information on the surrounding Martian terrain for the mission’s teams to identify science targets for the mobile laboratory.

The history-making helicopter known as Ingenuity has now begun a new series of operations on Mars, setting yet another altitude flight record on the Red Planet.

On 7 May, Ingenuity completed its fifth flight, a 129 meter journey south of Wright Brothers Field. After translating to its new location, the craft climbed to 10 meters altitude — a new record — to capture images of the surrounding area.

“We bid adieu to our first Martian home, Wright Brothers Field, with grateful thanks for the support it provided to the historic first flights of a planetary rotorcraft,” said Bob Balaram, chief engineer for Ingenuity at the Jet Propulsion Lab (JPL).

Ingenuity crossed millions of kilometers of space and was lowered to the surface of Mars by the Perseverance rover, which relays results from Ingenuity back to Earth and transmits instructions from Earth to Ingenuity. 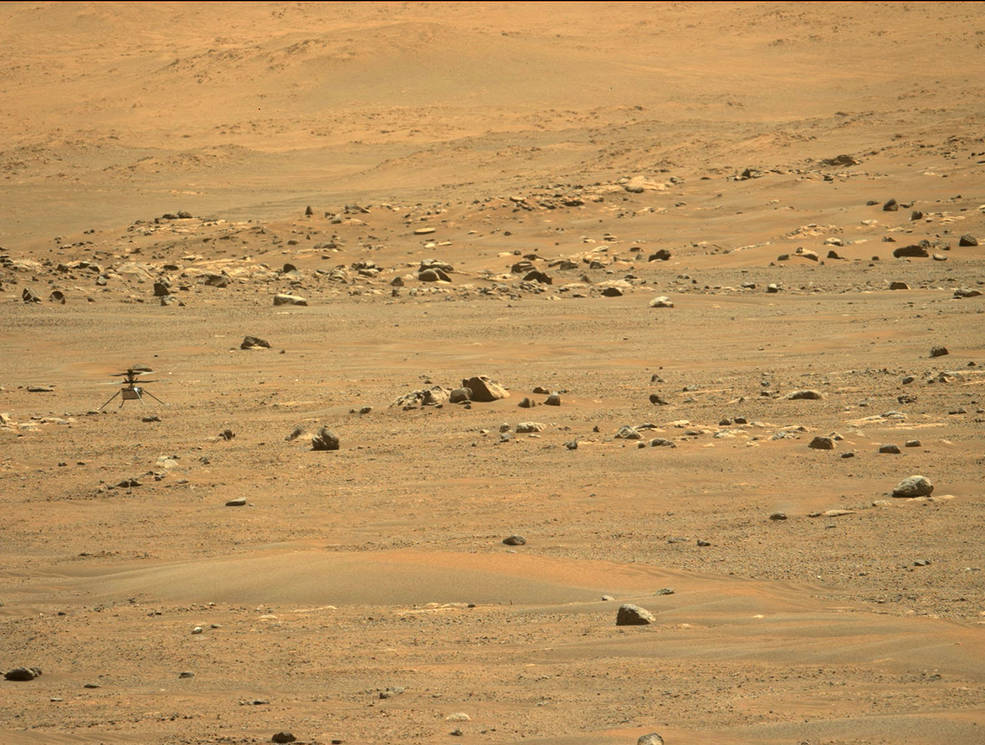 Ingenuity, seen after landing on 7 May by Perseverance’s Mastcam-Z imager. (Credit: NASA/JPL-Caltech/ASU/MSSS)

The rotorcraft made the first powered, controlled flight by a heavier-than-air flying machine on another planet on 19 April 2021, almost 117 years after the Wright Brothers made their history-making flight on Kill Devil Hill in North Carolina.

During its first flight, the 1.8 kilogram Ingenuity ascended to 3 meters, hovered, rotated, and then landed safely.

That piece of fabric has now been involved with the first powered, controlled flight on two planets. Moreover, the “airfield” where Ingenuity first flew, next to the Van Zyl Overlook where Perseverance was parked, was named Wright Brothers Field.

On Ingenuity’s second flight on 22 April, the electric helicopter rose vertically to 5 meters, flew laterally for 2 meters, made three turns, stayed airborne for 51.6 seconds, and then landed. A few days later, Ingenuity took flight for the third time on 25 April.

The rotorcraft rose vertically to 5 meters, flew laterally for 50 meters, achieved an airspeed of 2 m/s, and landed safely.

Ingenuity’s fourth flight was originally planned for 29 April, but its computer failed to change to flight mode and the craft stayed on the ground. After JPL evaluated what happened, the flight was rescheduled for the following day.

The fourth flight featured a climb to 5 meters and a flight south for 133 meters and then back for a 266 meter round trip. The flight lasted 117 seconds and captured numerous photographs for aerial surveillance of the surrounding landscape.

While designed to provide 350 watts for a 90 second flight, Ingenuity’s power system has performed better than expected, along with its other systems.

With its fifth flight complete, Ingenuity is now at a location known as Airfield B.

“The plan forward is to fly Ingenuity in a manner that does not reduce the pace of Perseverance science operations,” said Balaram. “We may get a couple more flights in over the next few weeks, and then the agency will evaluate how we’re doing.”

“We have already been able to gather all the flight performance data that we originally came here to collect. Now, this new operations demo gives us an opportunity to further expand our knowledge of flying machines on other planets.”

While Ingenuity has been busy with its flight program, Perseverance has also stayed busy when not needed as a communications platform for the rotorcraft.

The rover has not only continued system checkouts, but also begun initial science operations and important technology demonstrations applicable to future Mars missions.

The time has come: I’m switching from on-scene photographer to science investigator. Did this ancient lakebed ever have life? The tools I brought will help begin the hunt. I’m a bot on a mission. https://t.co/SjLUcUSCY4

One of the largest successes so far is the MOXIE, or Mars Oxygen In-Situ Resource Utilization Experiment. MOXIE is designed to test the process of converting Martian air (96% carbon dioxide) into oxygen for use by astronauts or as fuel for rockets.

On 20 April, MOXIE successfully made 5.4 grams of oxygen in one hour using a solid oxide electrolysis process, enough for 10 minutes of breathable air for an astronaut.

The MOXIE unit is a 17.1 kilogram box mounted to the front right side of Perseverance. It is about the size of a car battery but is designed to withstand temperatures of 800℃ inherent with the process that converts carbon dioxide to oxygen and carbon monoxide, which will be expelled into the Martian air.

Its gold coating also protects Perseverance from damaging heat that might otherwise threaten the other instruments and the rover.

MOXIE will be run at least nine more times over the next Martian year (two Earth years), and will be tested under different conditions, including time of day and temperature, as it works to produce up to 10 grams of oxygen per hour.

The data gathered will inform the design and operation of larger units that will have to process Martian air and regolith into products such as breathable air, water, and rocket fuel for future missions.

Future oxygen-generating devices will need to be up to one ton in mass to produce much larger quantities of oxygen, most of which would become liquid oxidizer for future rockets that plan to launch from the Martian surface.

Another technology demonstrator that has functioned well during the first months of Perseverance’s mission is the Mars Environmental Dynamics Analyzer, or MEDA. MEDA is an automated weather station that has been gathering daily reports on dust particle concentration and size as well as surface radiation, wind speed and direction, temperature, air pressure, and humidity.

Weather reports will be critical for future crewed missions at Mars so astronauts can be aware of hazards that could impact their mission. Local weather data from MEDA can also be used with global climate and weather data being collected from the Al-Amal orbiter from the United Arab Emirates to form a more complete picture of Mars’ weather and climate dynamics.

With the primary science phase of Perseverance’s mission beginning in earnest, the rover will now bring its science instruments to bear on the region where it currently resides.

The area near the landing site is believed to contain mudstones from the middle of Jezero Crater’s ancient lake. The first surface samples will be taken from Perseverance’s current general location before the rover departs.