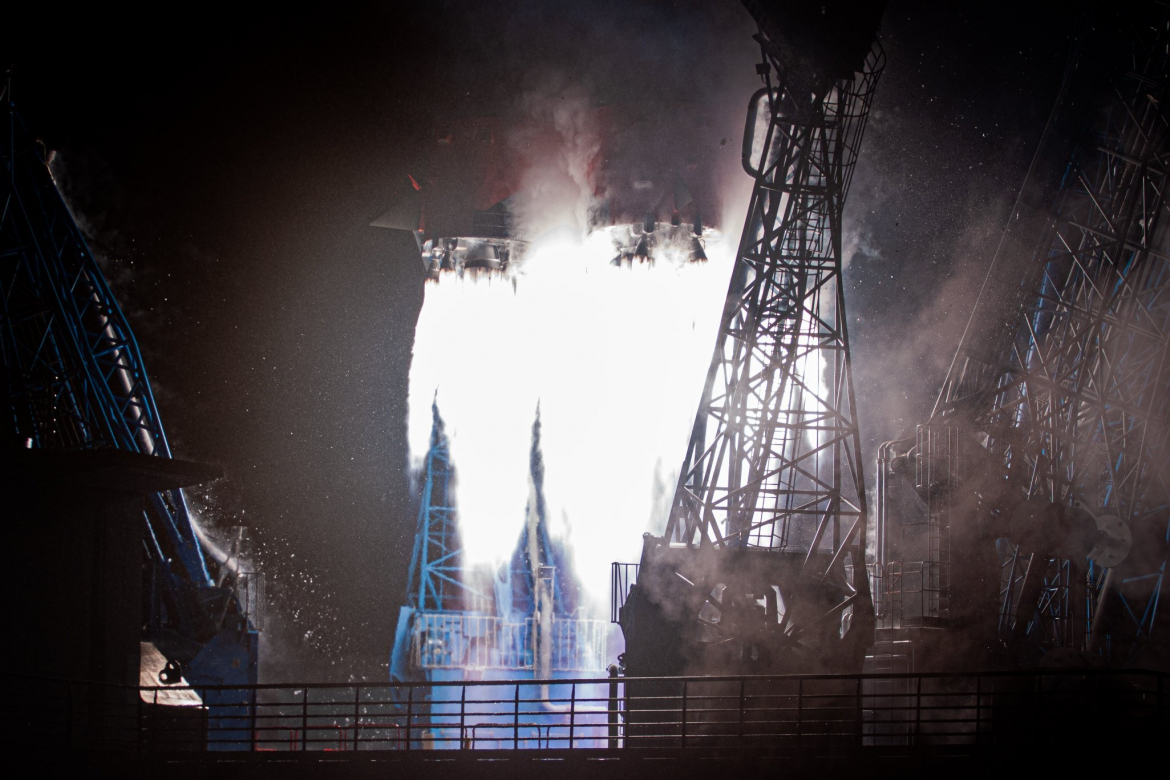 The seventh batch of OneWeb satellites were successfully launched on a Soyuz 2.1b rocket from the Vostochny Cosmodrome in Russia on Friday, May 28, with liftoff occurring at 17:38 UTC. After an initial attempt on Thursday, the launch was delayed to due to “technical reasons,” and a new launch target was made for Friday.

In collaboration with Arianespace, Starsem, and Roscosmos, this mission adds 36 spacecraft to OneWeb’s growing satellite internet constellation. Since the company’s first operational mission in February 2020, this launch brings the constellation’s total strength to 218 satellites, progressing towards the goal of 650 spacecraft on orbit for global coverage.

OneWeb is working towards providing global internet and broadband coverage through a satellite constellation, in similar principle to SpaceX’s Starlink and Amazon’s Project Kuiper, among others. This constellation is approximately 30% complete after this launch, with partial service expected this year for select countries in the northern hemisphere. Global service is targeted for next year, pending sufficient funding and launch cadence.

The Ku-band antenna of these satellites will be expected to provide customers with internet speeds of up to 50 Mbps servicing land, air and sea.

Arianespace Soyuz 2.1b launches with the seventh batch of OneWeb satellites out of Vostochny.

Once the initial goal of 650 satellites in orbit is achieved, OneWeb plans to move on to deploying phase two of the constellation. This will significantly increase the number of satellites to 6,372, which is down from an initial phase two plan of nearly 48,000 spacecraft.

OneWeb has partnered with Airbus Defence and Space to manufacture these satellites at a facility near the Kennedy Space Center on Merritt Island in Florida, under the name of OneWeb Satellites. With a current production rate of two per day, these satellites are then air transported to Russia where they are integrated for launch.

On May 7, the 36 individual OneWeb satellites arrived at Ignatyevo Airport for the journey to Vostochny Cosmodrome. Here, they were integrated into the payload dispenser manufactured by the Swedish company RUAG Space, which will be responsible for separating these satellites from the Fregat upper stage once in orbit.

Each satellite weighs 147 kg, and are separated four at a time with nine separation sequences. The spacecraft are deployed into an initial orbit of 450 km altitude at an inclination of 87.4 degrees. They will then raise themselves using their Hall-effect thrusters into an operational orbit of 1,200 km where they will remain throughout service. 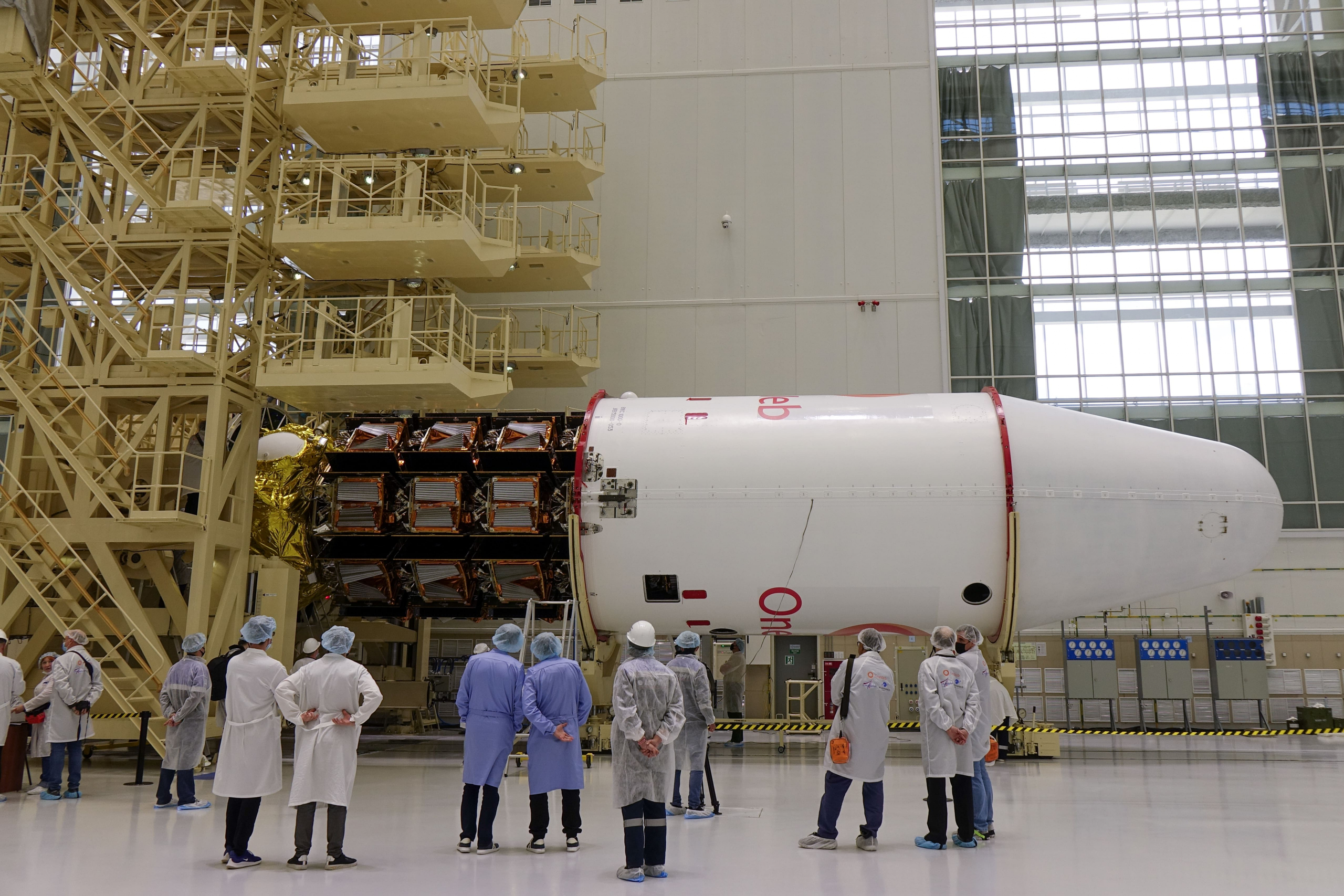 As with all OneWeb missions thus far, the vehicle responsible for getting this payload into orbit will be Soyuz, manufactured by Roscosmos and operated on behalf of OneWeb by Arianespace and its affiliate, Starsem.

The Soyuz 2.1b variant with the Fregat upper stage has been the vehicle of choice for OneWeb missions since the first operational launch in February 2020.

Fregat is an optional addition to the already three-stage Soyuz launch vehicle. As an upper stage, it allows payloads to be placed in a broad range of Earth orbits and even interplanetary trajectories. Utilizing hypergolic propellants (unsymmetrical dimethylhydrazine and dinitrogen tetroxide) for the S5.92 engine, it’s able to be ignited up to twenty times in space.

The vehicle for this mission completed integration on May 21 at Vostochny Space Center, where the fairing encapsulating Fregat and the OneWeb satellites with their dispenser were joined with the remaining three stages of the vehicle.

A readiness review was then conducted by the State Commission on the following day, approving transportation to the pad.

The vehicle rolled out to Site 1S at Vostochny Cosmodrome on May 24, with this mission marking the fourth fully commercial launch at Vostochny. The cosmodrome features another site, Site 1A, which will be used by the upcoming Angara launch vehicle once site construction and vehicle development is complete. 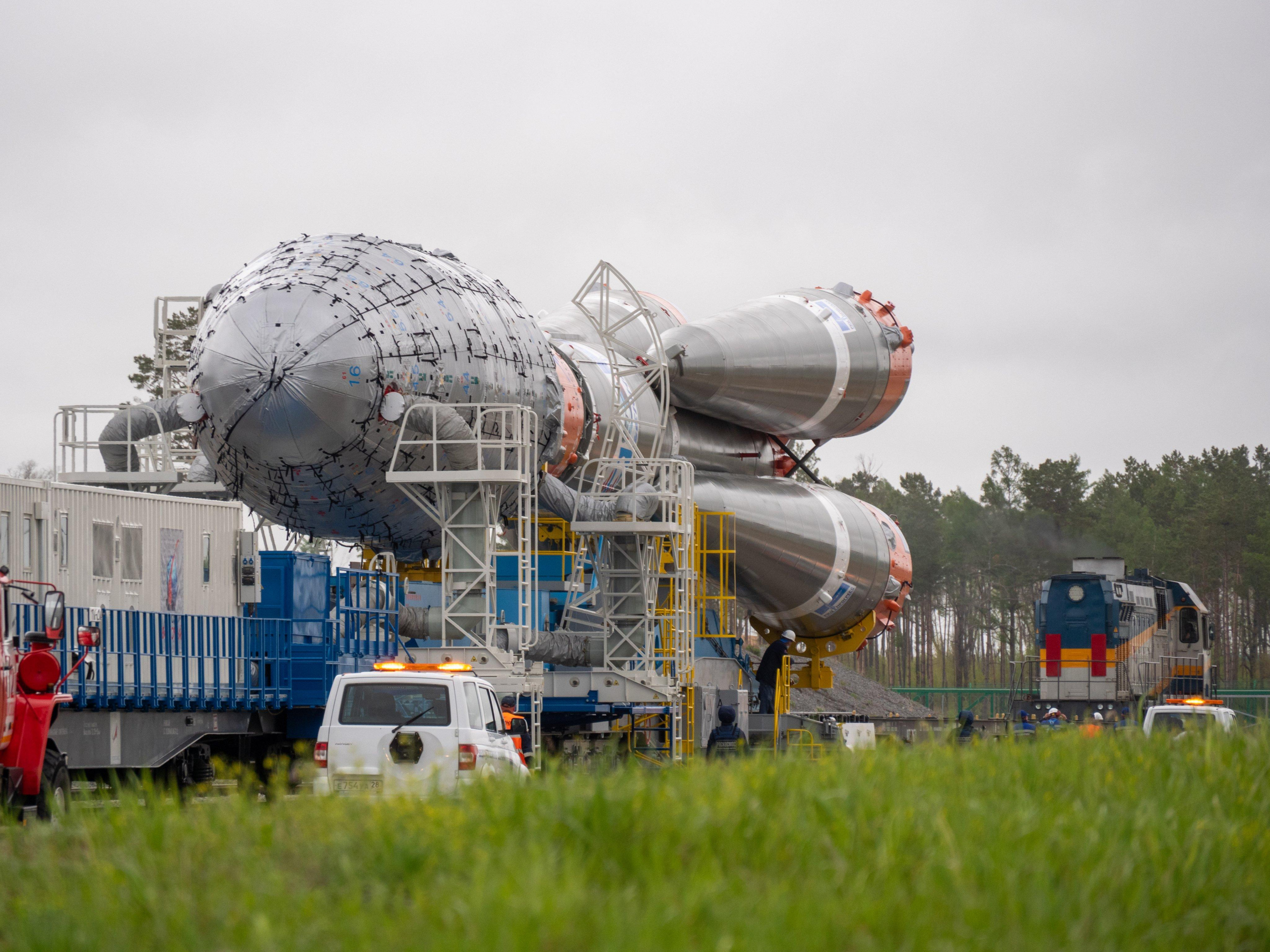 Soyuz-2.1b rolling out to the launch pad – via Arianespace

Soyuz was integrated with the launch pad, starting a sequence of tests and checks to verify the vehicle is ready for launch. This included charging the batteries on board the OneWeb satellites as well as other tests involving the vehicle and ground support equipment.

After liftoff, the boosters burned until T+ 1m 58s when they were jettisoned in the famous Korolev Cross fashion. The core (second stage) continued to burn until T+ 4m 48s, with fairing separation occurring at T+ 3m 38s.

There were nine separation sequences, with four OneWeb satellites ejected from the payload dispenser at a time. Between each sequence, Fregat’s attitude control system (ACS) performed brief firings.

A timeline of all these sequences can be seen below:

After the final separation sequence, Fregat performs a de-orbit burn, decreasing the altitude of its orbit to allow for a safe destructive re-entry into the Earth’s atmosphere and avoiding the creation of space debris.

This seventh mission continues to push the company closer towards the immediate goal of a 650 satellite constellation. Earlier this month, OneWeb announced their plan to acquire the Texas-based TrustComm, a company connecting constellations and its services with customers.

OneWeb’s Head of Government Services, Dylan Browne, said that the move “underpins our strategy to rapidly scale satellite communications service to the U.S. Department of Defense and other government agencies as they look to integrate high throughput, low latency solutions to meet new connectivity demands.”

With SpaceX’s Starlink and Amazon’s planned Project Kuiper constellations, OneWeb continues to work for its place in an ever-growing competitive market.