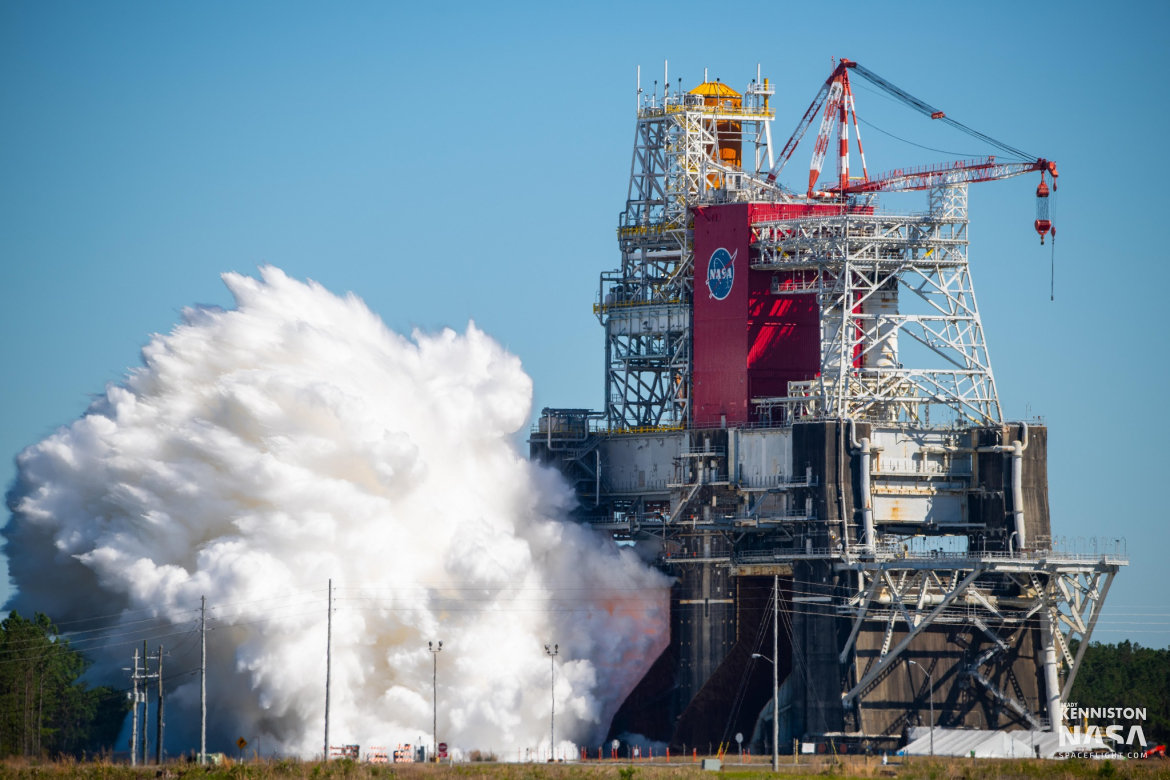 Engineers with NASA’s Space Launch System (SLS) program and prime Core Stage contractor Boeing continue to review terabytes of data from the now-complete, once-in-a-generation Green Run design verification test campaign. A series of eight test cases were completed, culminating in a 500-second long, full-duration static firing of the stage in the B-2 Test Stand at Stennis.

The Core Stage was the major new piece developed for the agency’s SLS launch vehicle, and both NASA and Boeing are pleased with results seen so far. Initial analysis and reviews of the test-firing data show that actual Main Propulsion System (MPS) performance was close to most predictions by analytical models and the system demonstrated operating margin during stressing tests conducted during the static fire.

The big orange rocket looks like the Space Shuttle’s less enormous orange External Tank, but among other Shuttle Orbiter components contained in the SLS Core Stage is all the Main Propulsion System (MPS) equipment for the care and feeding of four uprated Space Shuttle Main Engines (SSME). Now called RS-25, Aerojet Rocketdyne had already adapted the engines for SLS; the Green Run campaign that lasted from January 2020 to April 2021 used four veteran flight SSMEs as special test equipment to evaluate the design of the rookie Core Stage.

The eight test cases in the Green Run series culminated in a second Hot-Fire test on March 18 with Core Stage-1, the Artemis 1 flight vehicle, firing for a full-duration 500 seconds. The redo of the post-engine start aborted Hot-Fire test on January 16 completed all objectives for the test, picking up the balance that were missed or incomplete from January.

After fine-tuning a few parameters based on observations and analysis of previous tests, the different elements of the MPS, from the propellant and feed systems to hydraulics/thrust vector control (TVC), pneumatics, and pressurization, tracked closely to updated analytical models in March 2021. “Overall our pre-test predictions proved to be very accurate,” Jonathan Looser, NASA SLS Core Stage Propulsion Lead, said in an interview with NASASpaceflight.

“As we walked through the data ‘post-flight,’ we [could] see that our predictions in terms of vehicle loading, feed system performance, pressurization and pneumatics, TVC system, by and large were very close to our pre-test predictions if not right down the middle of those.”

“It confirmed that most of our modeling was very good,” added Collin Jackson, Boeing Propulsion Technical Lead Engineer in an interview with NASASpaceflight. “Even the TVC, the limit was tripped but we were only going to go a few psi (pounds per square inch) below the limit, our post-flight analysis showed.”

“That first abort on Hot-Fire 1 was caused by a TVC hydraulic pressure drop. That wasn’t unexpected, we were stressing the TVC systems right at that point. It just went a little bit below the limit.”

The core stage has four hydraulic systems, one for each RS-25 engine; the systems simultaneously provide the hydraulics for engine control, managed by the engine, and engine gimbaling, managed by the stage. The Hot-Fire test objectives included multiple stress tests of the hydraulics, and the first one had just started during the January 16 firing.

As the stage TVC began moving all four engines at their maximum required gimbal speed, the demand on hydraulics caused a couple of measurements to drop below limits. “It was just a very conservative limit that was put in place,” Jackson said. “[The limit was] really designed to capture a major leak, and what we saw was that we just got a little too close for the performance of the system.”

“We saw a little bit more pressure drop, and we ended up just busting that limit. And that’s what shut us down. So we were able to go in there, confirm all of our [analyses were] conservative, convince ourselves that we could lower that limit, and we did.”

“You saw the result during Hot-Fire 2,” he added. “It performed very well.”

The Green Run campaign started with a structural modal test in late January 2020 and was suspended for two months by the onset of the COVID-19 pandemic. After work resumed under strict health protocols and much more remote participation, the stage was finally powered up in late June to checkout both the vehicle’s and Boeing’s Stage Controller ground computer systems.

When #Artemis I launches to the Moon, Charlie Blackwell-Thompson will be directing the @NASAGroundSys launch team at @NASAKennedy. LISTEN to the latest episode of "Houston, We Have a Podcast" to learn more about NASA's first female launch director >> https://t.co/IM9kAQuRcY pic.twitter.com/z4R2uBm2KX

Over the summer of 2020, the tests built on top of one another, with MPS pneumatic and hydraulic checkouts demonstrating that the stage’s mechanical systems worked within operational limits as commanded via the ground control system. The big tests that involved fueling and firing of the stage were delayed by an issue with a liquid hydrogen (LH2) prevalve and by a series of tropical weather systems that forced Boeing to repeatedly prepare for a hurricane strike.

The sixth and final tropical system to impact Louisiana and the nearby Stennis area was the worst; Hurricane Zeta passed directly through the Stennis area, though weakened as it moved inland. The vehicle was finally fueled for the first time in December 2020, leading up to the Hot-Fire tests in January and March 2021.

The tanking tests and the static firings gave the propulsion teams their first chance to see how the different MPS subsystems performed.

“The key one that we were actually looking for from an MPS [point of view] on the Hot-Fire was the pressurization system,” Jackson said. “The key thing that we learned is that the MPS system would always have enough gas to [pressurize] the tank while the TVC system was pulling off as much gas as it could ever demand.”

“We always talked about this ground run that we’re doing at Stennis, it’s the maximum demand. And that really was. We ran at the maximum limit to make sure that the TVC [Core Auxiliary Power Units] were pulling the maximum amount of gas from each engine to keep cycling and keep driving that turbine.”

Operation of the MPS and the RS-25 engines becomes interdependent shortly after the engines reach mainstage operation. The vehicle hydraulics are initially driven by a ground-supplied helium spin-start system, but that is quickly bypassed by engine exhaust gas pressure when the RS-25 engines are up and running. 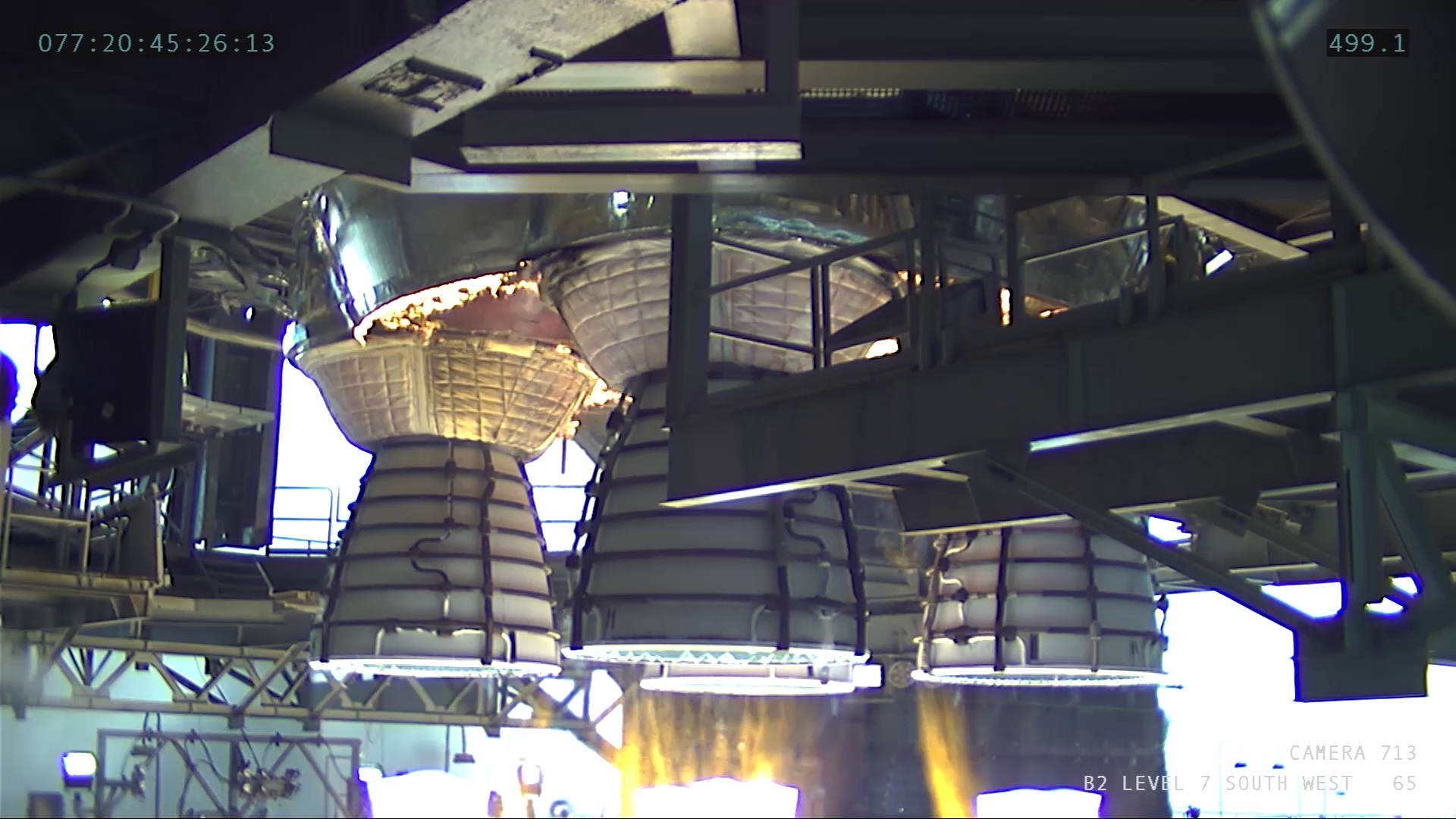 (Photo Caption: The four RS-25 engines are throttled at their 85 percent power level just prior to being commanded to shutdown during the Core Stage Green Run Hot-Fire test on March 18. The engines were allowed to run until propellant depletion when the low-level sensors triggered the cutoff command. On a nominal ascent the propellant load in the stage will include performance margins and the vehicle will command shutdown based on navigation targets prior to depletion.)

“The key thing there [was] we’ve never actually pressurized the tank, so we had a lot of analysis that we were going through with Shuttle test data and Delta test data, but until you run it in the SLS architecture and see our tank with our insulation, our diffuser, there’s still some learning that’s going to go on to make sure that you’ve verified those models,” Jackson explained. “There was just some structural differences between the Shuttle tank and our tank so that was the biggest unknown going into it.”

“If you remember, the Space Shuttle drove TVC using hydrazine, so it was completely disconnected, where in SLS we’re driving it from that hydrogen pressurization gas supply. So we married the two, and we wanted to make sure of our models and all of our analysis was confirmed to be right… that we could do both at the same time with that same amount of flow.”

Jackson noted that NASA and Boeing had the ability to adjust the pressurization flow by changing out some orifices within the system if that had been warranted. “Post-operation, we can change out orifices to increase the flow because there’s a certain amount of bypass flow that goes into the tank and control flow,” he said.

“We could have increased the orifices to get more flow going up the pressurization leg of the MPS system. It was really just refinement, and the analysis, as I mentioned, was excellent.” 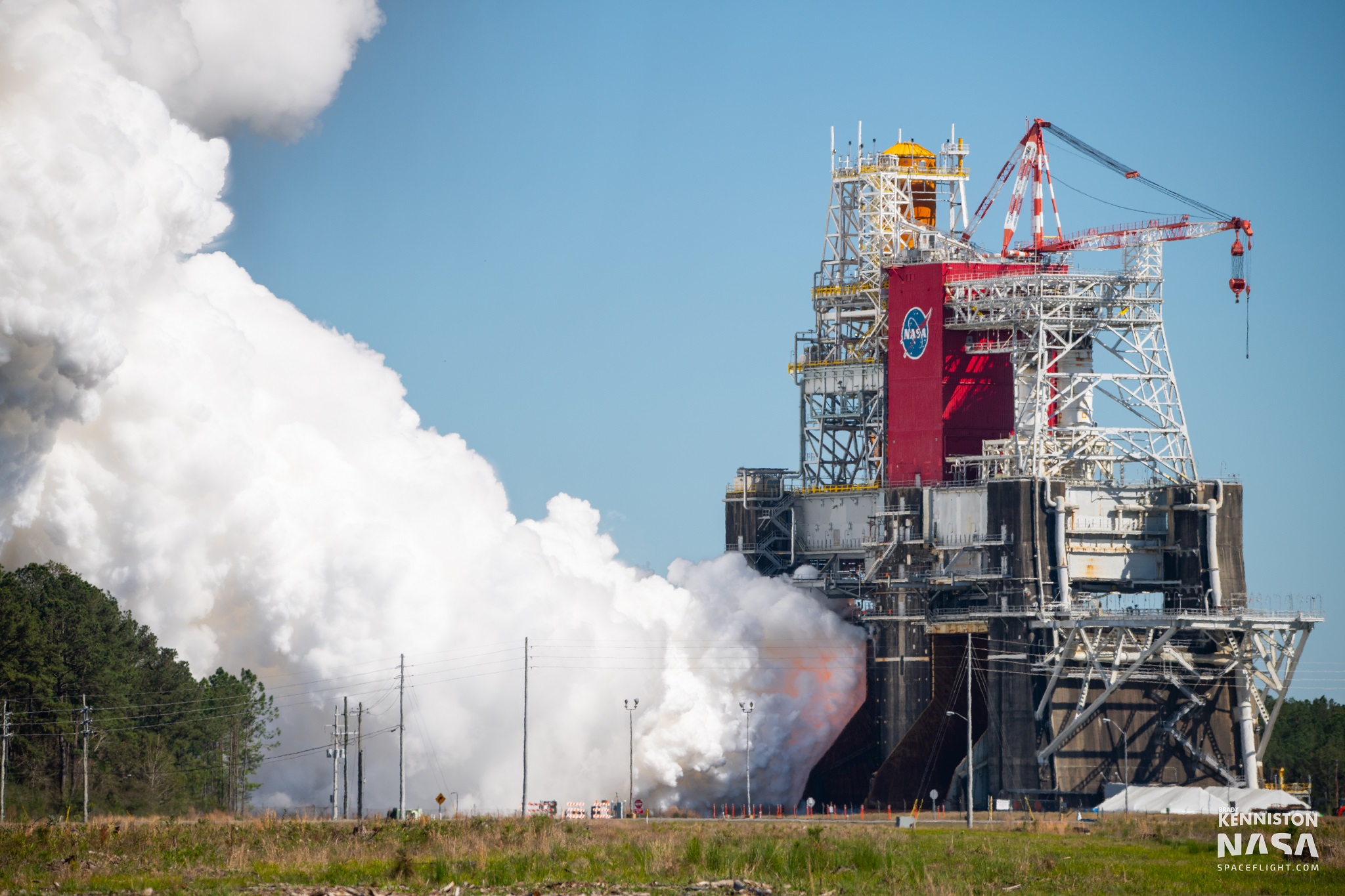 The system’s actual performance tracked right on top of the model predictions, so the option isn’t needed. “We went straight down the middle of where we planned to go, and it operated the way we planned,” Jackson added.

“We showed we could gimbal as much as NASA [Guidance, Navigation, and Control] would ever demand. The team was very happy with it, and there’s no need to actually size up the orifices. So we’re in really good shape there. Everything performed great.”

The three different gimbal profiles provided data sets with different initial conditions, but Jackson said the first gimbal test was especially stressing to the system. “The first one was more of a concern for TVC because the [hydraulic] fluid was colder,” he explained.

During the countdown, prior to ignition, all the equipment in the engine section is cold soaked, surrounded by cryogenic propellant lines during hours of tanking and engine chilldown.  A heated nitrogen gas purge, heaters on the hydraulic lines, and a circulation pump in each system help keep temperatures acceptable before the engines start.

Virgin Orbit names next mission and expands operations to Brazil