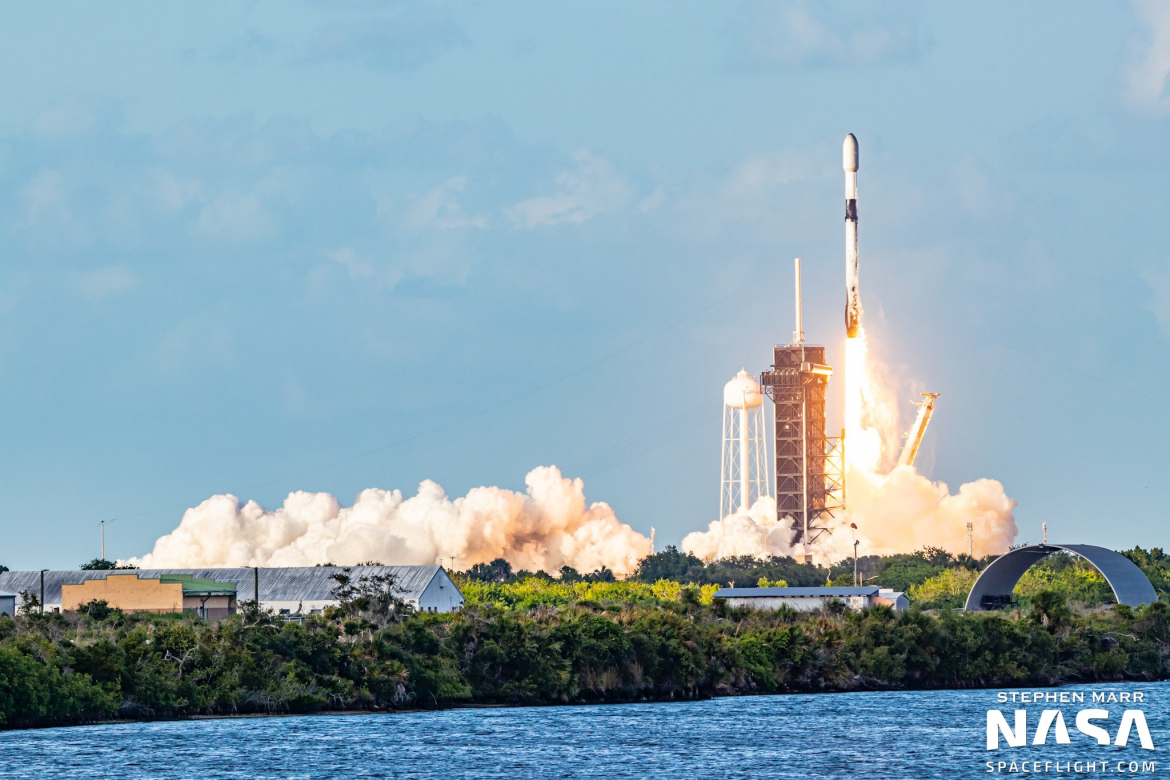 SpaceX launched its third Starlink mission in just 11 days on the v1.0 L26 flight. The mission brings the total number of operational Starlink v1.0 satellites launched to near 1,567 – just shy of the 1,584 needed to declare all of the first shell of Starlinks launched.

It will marked the first launch from the Eastern Range since the 45th Space Wing was renamed Space Launch Delta 45 on 11 May. The change was in accordance with new U.S. Space Force naming conventions as the newest branch of the U.S. armed services activates the Space Systems Command.

Starlink v1.0 L26 lifted off 24 years to the day, and from the same pad, as the STS-84 flight of Space Shuttle Atlantis on the sixth Shuttle-Mir docking mission.

Continuing the rocket reuse operations LC-39A has fostered since April 1981, Falcon 9, under the power of first stage booster B1058-8 (with the “-8” signifying the stage’s 8th flight), delivered 52 new Starlink satellites, as well as Capella Whitney 4 and Tyvak-0130, to orbit.

The Starlink constellation is set to consist of five orbital shells, with the Starlink v1.0 L26 mission continuing to build the first shell of 1,584 satellites in a 550 kilometer altitude, 53 degree inclination orbit. Deployment of this shell began on 11 November 2019 and will reach the “all satellites launched” milestone with the next mission: Starlink v1.0 L28.

Once all of the first shell Starlinks are in their correct positions within the constellation, which will take a few more months to complete, the network will provide coverage to approximately 80% of Earth’s surface.

This mission in particular deviated from most Starlink flights thus far in that it carried rideshare payloads with a reduced number of Starlink satellites to account for payload volume and mass-to-target-orbit constraints. Joining the Starlinks on this mission were Capella Whitney 4 and Tyvak-0130.

Some extra frames for your enjoyment. Have I mentioned this booster has launched 7 missions in just over 10 months? Whoa. 🤯

The first of the 36 planned satellites of the constellation launched in August 2020 on the Rocket Lab “I Can’t Believe It’s Not Optical” mission. The other two already-launched Capella satellites were part of the Transporter-1 mission earlier this year.

After a multi-hour, no holds, countdown, Falcon 9’s launch autosequence began at T-35 minutes and counting. At this time, an automated series of events unfolded to thermally condition and load the Falcon 9 first and second stages with liquid oxygen and RP-1 kerosene.

Loading of RP-1 kerosene on both stages began at T-35 minutes, as did liquid oxygen loading on the first stage. RP-1 fueling on the second stage was completed at the T-20 minute mark, with liquid oxygen fueling of stage two commencing four minutes later.

To prepare the nine first stage Merlin 1D engines for ignition, engine chill began at T-7 minutes — where super cold liquid oxygen is allowed to slowly bleed into the engine plumbing, cooling the engines to within an acceptable “start box”, or temperature range, for engine ignition.

At the T-2 minute mark, fueling was completed. A minute later, the Falcon 9’s onboard computers took control of the countdown, a milestone known as “startup.” 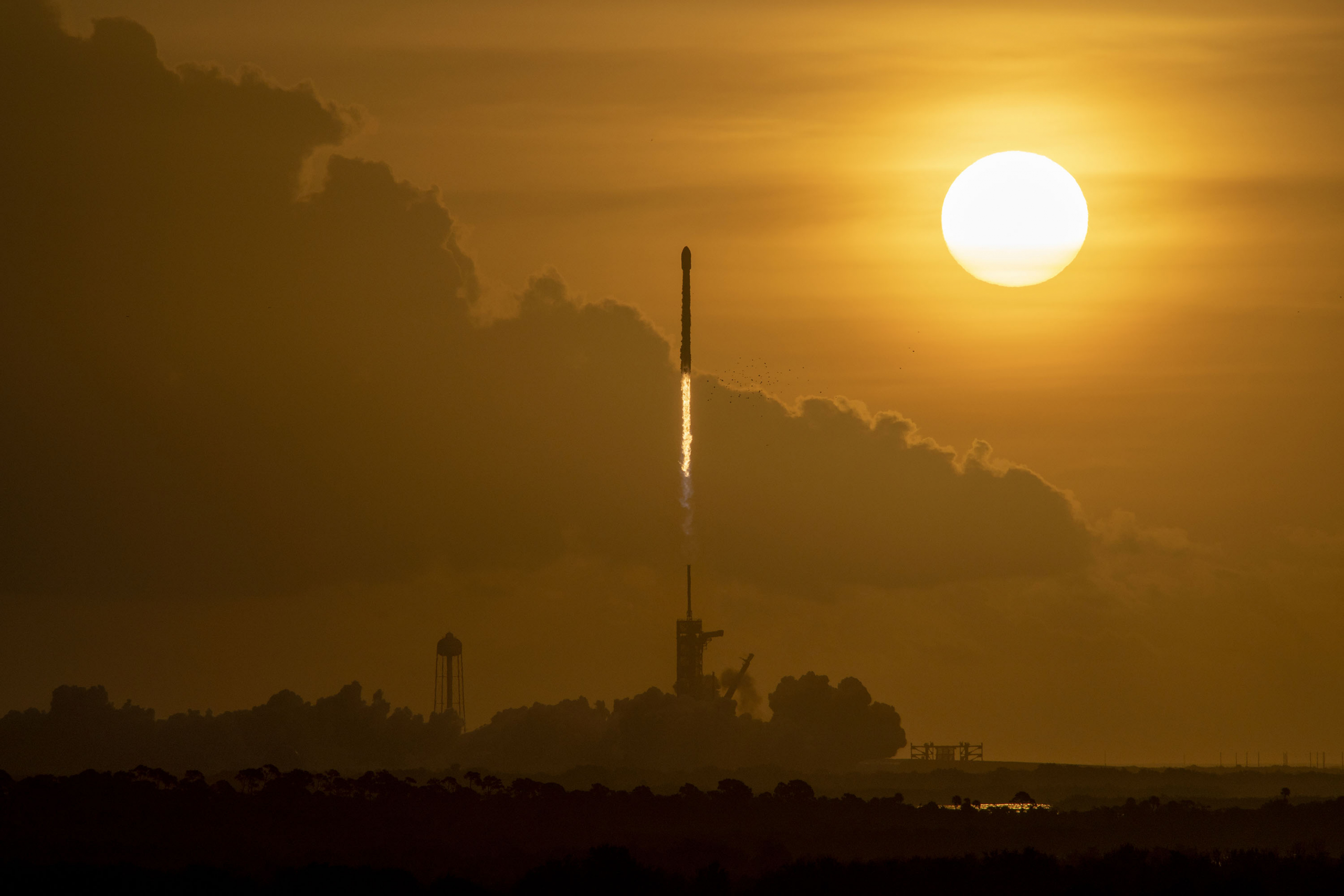 At T-3 seconds, the onboard computers commanded ignition of all nine first stage engines. At liftoff, the hold-down clamps released the Falcon 9 rocket while the transporter/erector rapidly retracted to 45 degrees to protect its systems from the blast of the rocket’s engines.

Soon after, the Falcon 9 pitched downrange, traveling northeast from the Kennedy Space Center, aligning the launch vehicle for its 53 degree inclined orbit.

The nine Merlin 1D engines on the first stage shut down at T+2 minutes 31 seconds, followed by stage separation and second stage ignition. The Falcon 9 can compensate for multiple-engines-out during first stage flight by burning the remaining engines longer than pre-flight predictions to achieve the velocity target the second stage needs to begin with in order to make orbit.

Shortly after separation, the four titanium grid fins on the first stage deployed, followed by a flip maneuver to align booster B1058 properly for reentry.

At T+3 minutes 16 seconds, payload fairing separation occurred from stage two. Similar to other missions, the set of flight-proven fairings — with the active half last supporting SiriusXM-7 and the passive half last supporting NROL-108, both in December 2020 — parachuted directly into the ocean for recovery, as SpaceX appears to have settled on this method as the most efficient option.

Once in the ocean, both halves will be recovered by the chartered recovery vessel Shelia Bordelon, which left Port Canaveral on 12 May for the mission.

B1051-9 is still onboard OCISLY while B1058-6 is being prepared for transport this morning. Let's take a look at the #SpaceXFleet and the hardware making reusibility possible with an I-Spy Port edition thread. #SpaceX #Starlink pic.twitter.com/ndgQBpJFLn

Meanwhile, as the payload fairings begin their return journey, the second stage continued firing its vacuum-optimized Merlin engine to bring the payload to orbit as the first stage, descended through the atmosphere, reignited three of its Merlin 1D engines to slow itself down and protect itself during reentry.

The center Merlin 1D engine then relighted one more time for the landing burn to place the booster on Of Course I Still Love You, stationed approximately 630 km northeast of the launchpad and 240 km off the coast of North Carolina.

They used to call the first stage of rockets "dumb boosters". Not anymore! pic.twitter.com/Jtvwr3FCS6

About 20 seconds after the booster’s landing, the second stage shut down following insertion into an initial parking orbit. After coasting for 45 minutes 56 seconds, the stage reignited for a four second burn to place the stack into a 569 x 582 kilometer orbit, per pre-flight TLEs — Two-Line Elements, or orbital tracking information.

This orbit is higher than Starlink-only missions, which typically target a 260 x 280 kilometer orbit, due to the needs of the rideshare payloads.

Two minutes after the second burn is complete, Tyvak-0130 deployed, followed three and a half minutes later by Capella. At T+98 minutes 10 seconds, all 52 Starlink satellites scheduled deployment.

After landing, booster B1058-8 will be brought back to Port Canaveral, where it will continue to serve the SpaceX booster fleet. B1058 is one of five Falcon 9 boosters introduced in 2020 and first supported the Demo-2 crewed mission in May 2020, launching Dragon Endeavour and becoming the first SpaceX rocket to launch crew.

While B1052-2 and B1053-2 are both included on this list, their status as “active” can rightly be called into question as SpaceX, despite Elon Musk’s statements that Falcon Heavy side boosters are regular Falcon 9s that just need to have their nosecones replaced with interstages, has shown no interest — despite need — to convert the side boosters.

This need stems from the losses of B1056-4 and B1048-5 on the back-to-back Starlink v1.0 L4 and L5 missions in early 2020 and the more-recent loss of B1059-6 on the Starlink v1.0 L23 mission — all of which were lost during landing attempts after sending the second stage on its way to a successful orbit.

Instead of bringing the two Falcon Heavy side boosters into the general Falcon 9 fleet, SpaceX instead has pulled B1063-1 from the west coast and moved it to Florida to assist with the upcoming flight manifest. It will launch the Starlink v1.0 L28 mission no earlier than 26 May.

How SpaceX manages the fleet will be interesting to watch as regular missions from Vandenberg are set to resume no earlier than July with the start of Starlink polar launches from the west coast facility.