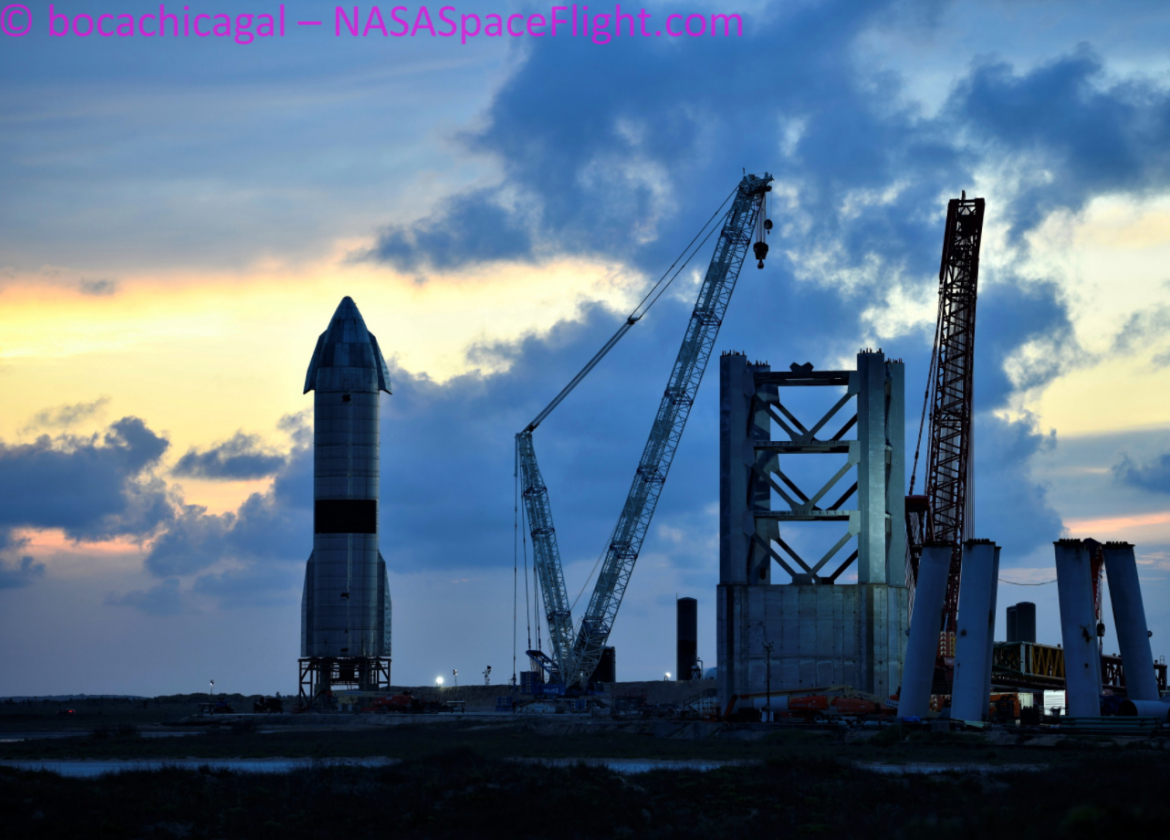 Following its successful launch and landing, Starship SN15 has been placed back onto a launch mount for inspections and a potential re-flight. The upcoming test schedule will be focused on providing a green light for an orbital attempt that has already been filed with the FCC (Federal Communications Commission).

SpaceX finds itself in a unique position of having a successfully landed Starship still in one piece out at the launch site.

Following a few days sitting on the landing pad it touched down on, SN15 has now been lifted onto Launch Mount B, having launched from Mount A. This marked the first time the same Starship took up residence at both of the suborbital launch mounts.

Although Elon Musk has not advanced on his initial comment SN15 might fly again, the decision is likely pending a full inspection of the vehicle, including its engines, which will be allowed for now that it is back on a launch mount.

This will allow for additional access to the aft of the vehicle, following what is understood to be positive results from initial inspections conducted while the vehicle was sat on the landing pad.

As for SN15, numerous options remain open to SpaceX, from reflying the Starship to conducting ground tests including cryotesting the vehicle in what is a post-flight configuration or even Static Fire testing if the option of another flight is removed.

Reflying SN15 would be an attractive option to SpaceX, a milestone that caters towards the company’s reusability mantra. It would also allow for additional flight data that could be incorporated into the potential flight of SN16.

That next Starship is deep into preparations for roll to the launch site, having been stacked inside the High Bay. However, final processing – such as installing aero covers over the flaps – has been placed on hold pending SpaceX defining a clear path ahead. 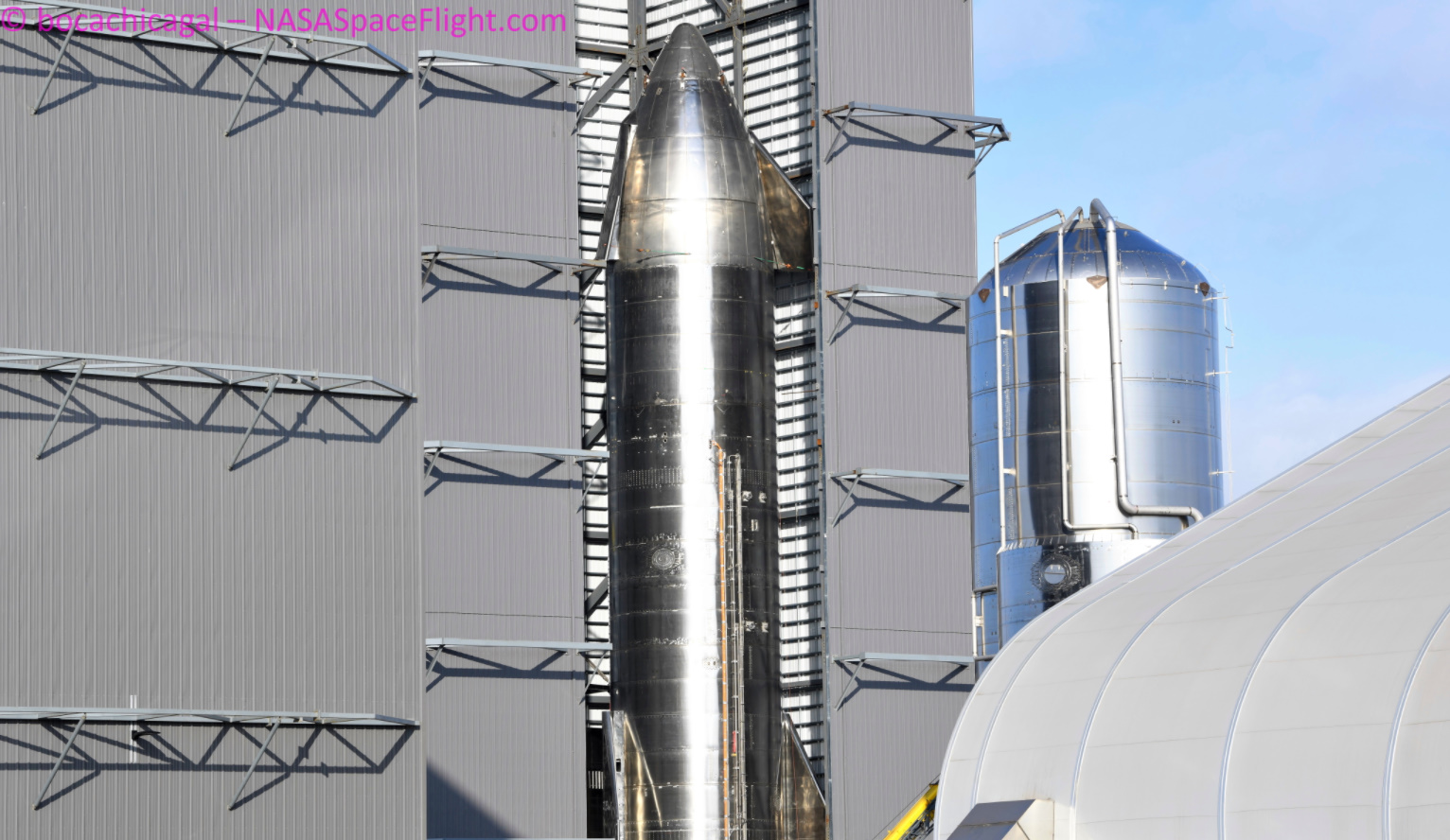 Starship SN16 waits in the High Bay – photo via Mary (@bocachicagal) for NSF.

Should SpaceX opt to fly SN16, it will likely be to the full 20 kilometer high altitude hop target.

While Starbase’s impressive production cadence has been a focal point over recent months, the usual full occupancy of the Mid Bay has been lacking of late. This again points to SpaceX finding itself at a decision point on the test schedule.

Most of the new stacking operations have been related to the build-up of Ground Support Equipment (GSE) tanks that will take their turns rolling down Highway 4 to become part of the Orbital Launch Site (OLS).

Ongoing construction work at the OLS is also playing into Starship test schedule evaluations, with any near-term Starship test and flight operations requiring the site to be clear of workers.

Such operations would also require two huge cranes to be rolled back down Highway 4 one at a time, namely the LR 1600/2 (community nicknamed “Tankzilla”), which was recently used to place Starship SN15 on to Mount B, and the LR 11350 (which SpaceXers nicknamed “Frankencrane” due it being a collection of various crane appendages).

Notably, the LR 11350 would require disassembly of its boom before any such move away from the launch site.

Parts for another huge crane, the LR 11000, also began arriving on a fleet of trucks Sunday.

Both cranes are being staged to stack the numerous sections of the Launch Integration Tower that have already begun to rise out of the ground next to the launch mount.

Additional sections of the Launch Tower – prefabbed off-site – are being assembled at the Old Gas Well site, ready to be transported to the OLS for stacking via the use of the new cranes. 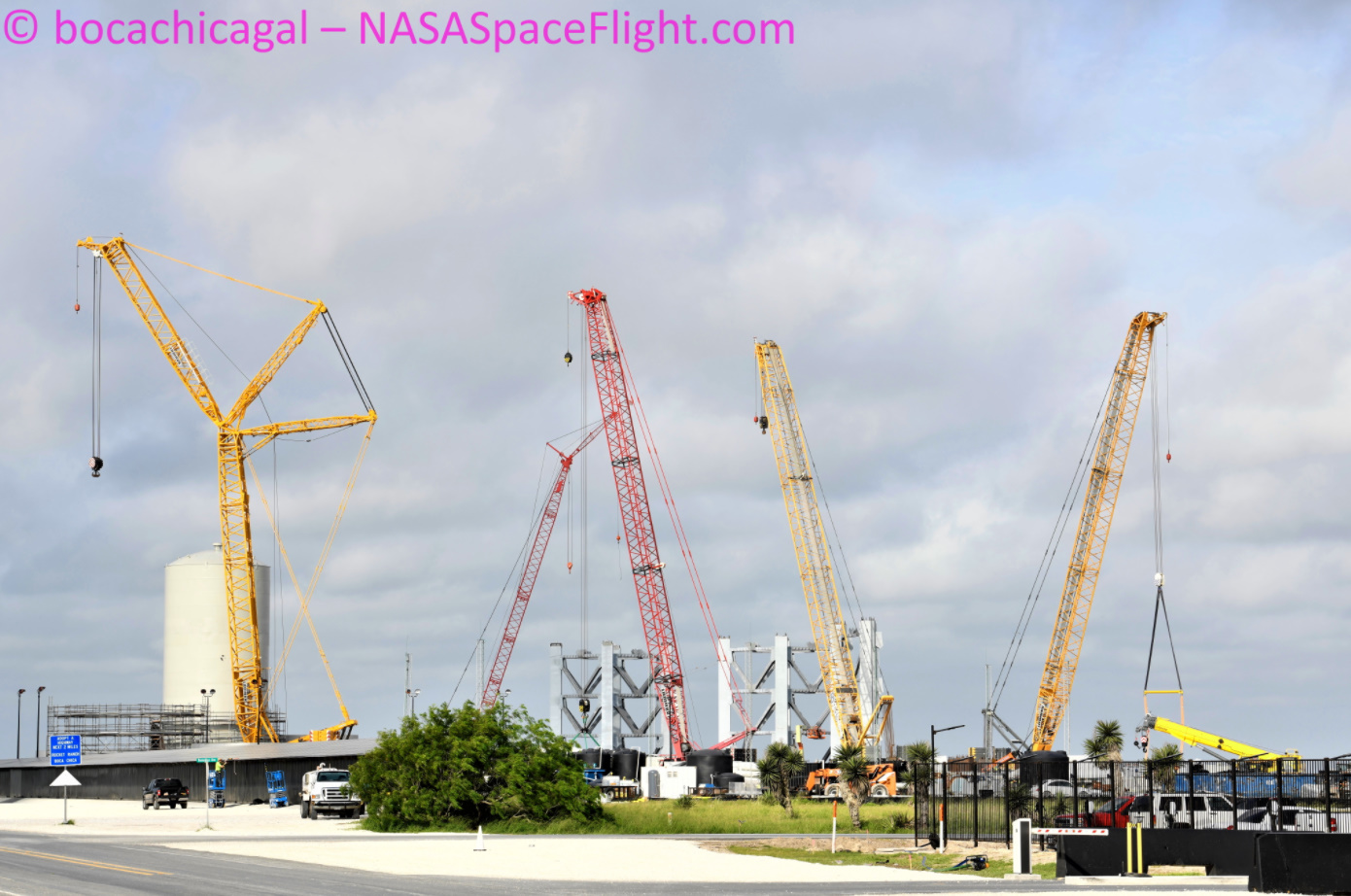 While the support structures for the Super Heavy/Starship stack are being built, work on the OLS tank farm is well underway. Several commodity tanks have already been installed, along with two large GSE stainless steel tanks that have been constructed using similar methods to those utilized with Starship structures.

A third GSE tank is also ready to roll down Highway 4, while GSE 4 is currently being stacked. The GSE tanks will be cocooned in the cryo tank shells, currently also under construction at the Old Gas well site. These will add insulation for the cryogenic fluids in the GSE tanks, with gaseous nitrogen used as insulation between the two tank layers.

The infrastructure is being prepared ahead of welcoming Super Heavy BN3 to the pad.

Super Heavy BN1 was stacked in the High Bay but scrapped soon after when SpaceX opted to change the design of the booster, specifically the arrangement of the LOX (Liquid Oxygen) and CH4 (Liquid Methane) tanks.

Sections for BN2 and BN2.1 were also spotted. However, both were sections catering to pathfinder objectives. As such, BN3 is expected to be the first stacked Super Heavy to be rolled to the OLS.

The first sections of the BN3 booster have already been staged for stacking inside the High Bay. 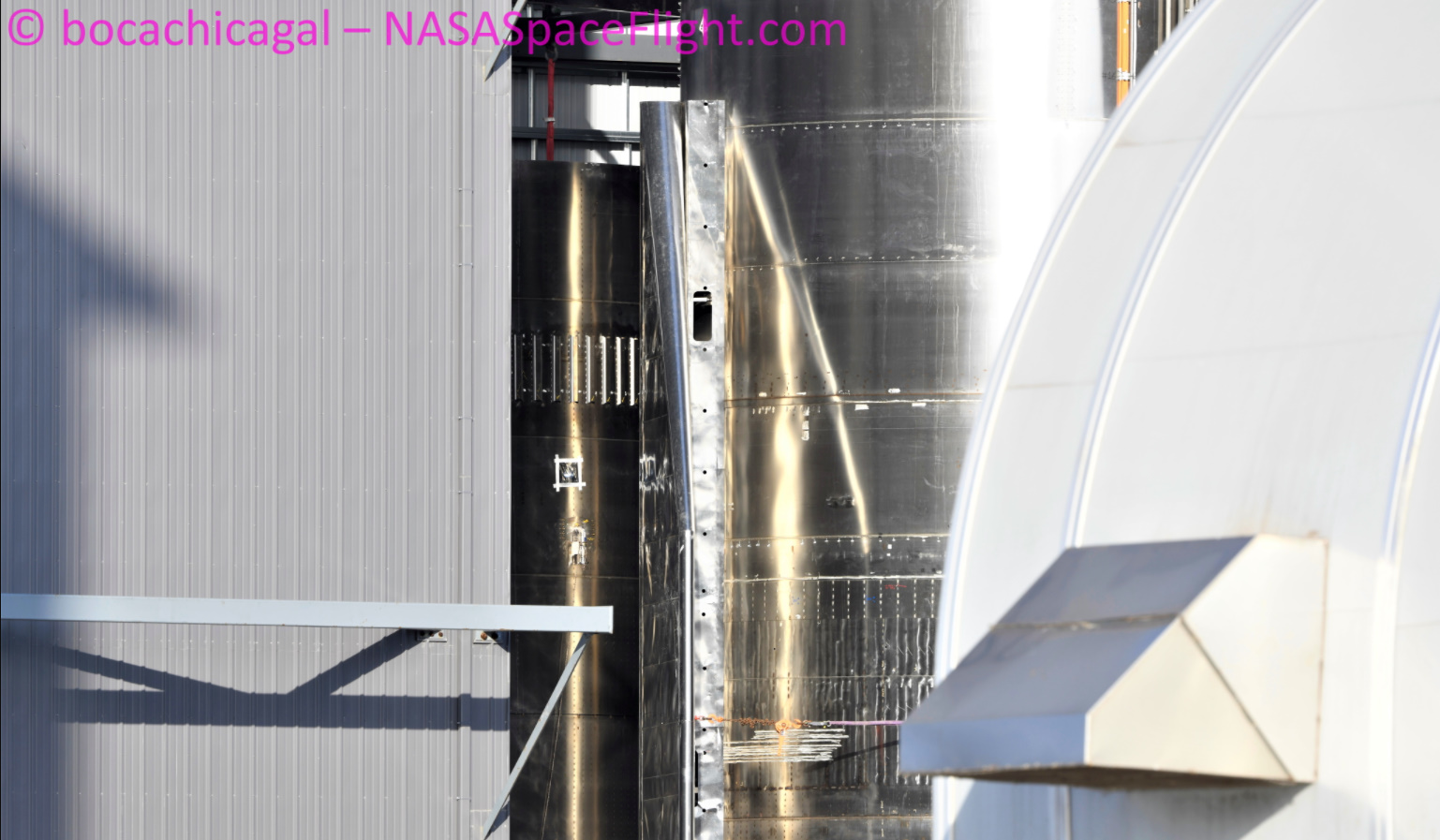 As reported from recent documentation, SpaceX is targeting the flight of Super Heavy BN3 with Starship SN20 for the orbital test flight. While the designated vehicles for the mission may change over the coming weeks, a sign the test flight is deep into the planning phase was observed with the publication of a filing with the Federal Communications Commission (FCC).

According to the FCC overview, the flight profile calls for staging between the Super Heavy and Starship at approximately 170 seconds into flight.

“The Booster will then perform a partial return and land in the Gulf of Mexico approximately 20 miles [32.1 km] from the shore. The Orbital Starship will continue on flying between the Florida Straits. It will achieve orbit until performing a powered, targeted landing approximately 100 km (~62 miles) off the northwest coast of Kauai in a soft ocean landing.” 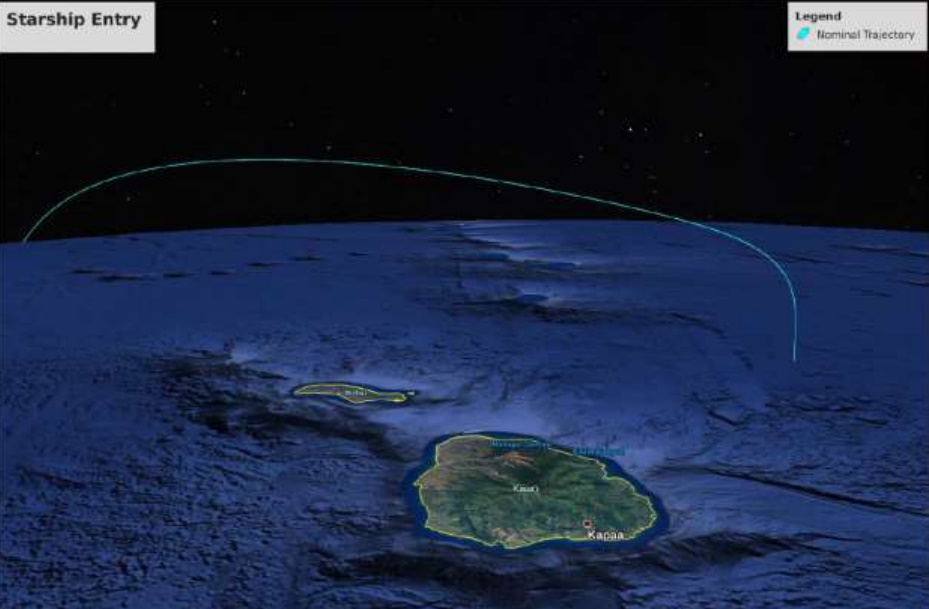 As confirmed by the document, neither Super Heavy nor Starship will be returning to the launch site. Furthermore, Starship will perform its well-known bellyflop, flip, and landing maneuver over the Pacific and will be expended in the ocean.

Super Heavy will have a full set of Raptors; the number has likely changed since the 2019 Starship update when Super Heavy was to have 28 engines. The outer ring of engines will not have Thrust Vector Control while the inner ones will. Starship is set to utilize six Raptors, three sea-level and three vacuum-optimized.

As such, this test flight alone will require a large stock of Raptor engines.

While Raptors arriving into Boca Chica are in the SN50 and SN60 range, SpaceX’s test site in McGregor is hosting engines in the SN70-80 range, while it is understood that production in Hawthorne is working on engines past SN150 — with a current shipping rate of several Raptors per week.

To support a fully expendable launch with over 30 Raptors, SpaceX has drastically increased the Raptors’ production rate. Following the new clean Raptor design, SpaceX has increased production, while McGregor is ready to cater to the increased test cadence with a new vertical engine test stand. 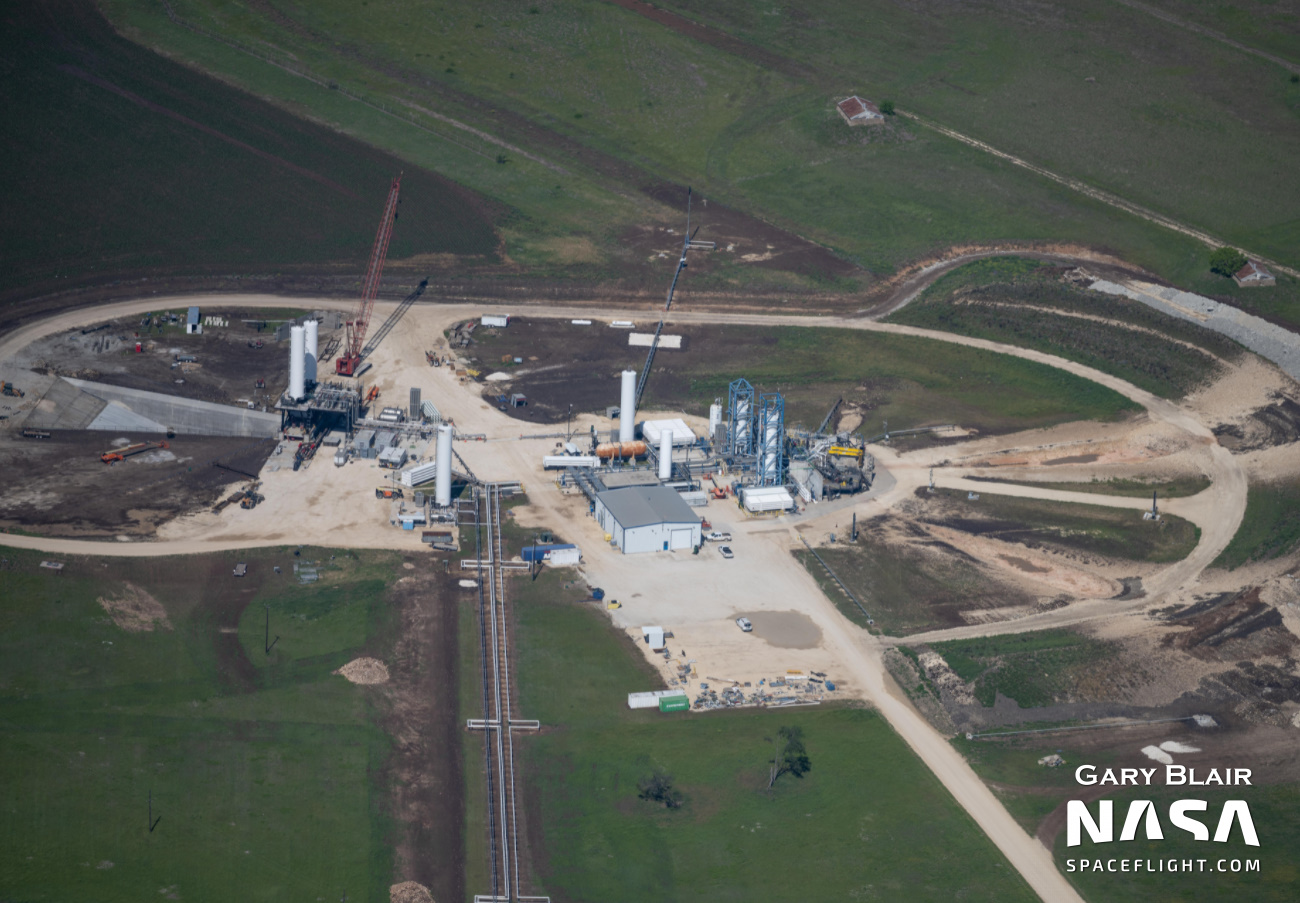 Demand for Raptors, not least with the first orbital test flight being expendable, will only increase as SpaceX pushes through to future missions with additional Super Heavy and Starship flights.

While the SN20 and BN3 combo will be first in line for orbital flight, it’s expected that the subsequent boosters and ships will pair up accordingly, SN21 with BN4, SN22 with BN5, and SN23 with BN6. In addition, it’s understood that a major design upgrade is set to come with the SN24/BN7 pair.

By the time SpaceX has moved into the SN24 range, there is the potential of minimal availability on SpaceX’s two ocean platforms.

Phobos and Deimos are currently being converted for the task of hosting Super Heavy launch and landing. Notably, the vehicle’s landing will also see the introduction of the catching system, with two large mechanical arms grabbing the booster during the end of the landing burn.

The OLS – which will eventually host two Super Heavy launch mounts – will also sport the catching arms on the launch integration towers.

While this ambitious test program requires numerous successes in a relatively short period compared to most of the space flight industry, SpaceX has already proven its ability to cater to such a high test cadence.

SpaceX Boca Chica was nothing more than a tent by the beach just two years ago. Now, it’s a sprawling production site and dual launch facility — with a new name.

The facility was officially christened Starbase this weekend, with the installation of signage.