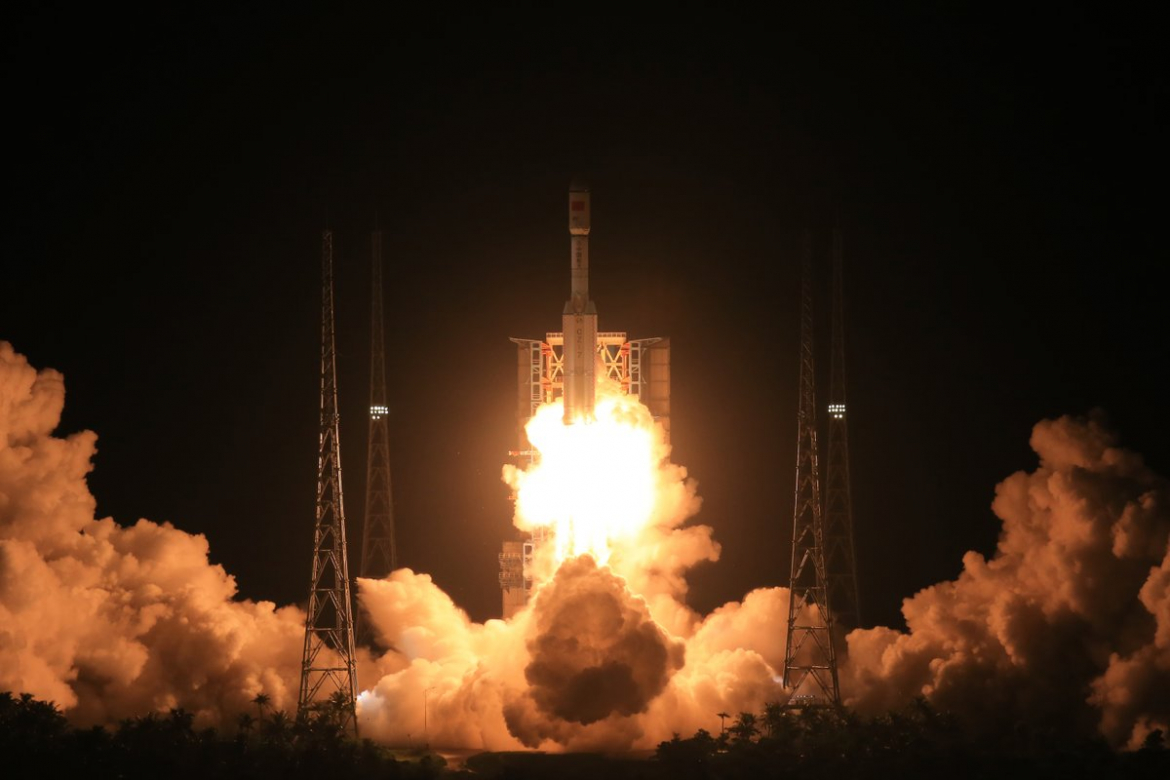 China has launched its Tianzhou 2 cargo mission to its new space station. Liftoff from the Wenchang Spacecraft Launch Site occurred Saturday, 29 May at 12:55 UTC / 08:55 EDT aboard a Chang Zheng 7 rocket following two previous scrubbed launch attempts in early May.

Tianzhou 2 marks the second flight of the uncrewed Tianzhou spacecraft, which China uses to resupply its newly-launched space station, and the first such mission in support of a crew. After launch, the spacecraft successfully docked to the Tianhe module at 21:01 UTC / 17:01 EDT.

Tianzhou 1 launched to the Tiangong 2 station in April 2017 and conducted a series of docking demonstrations and propellant transfer tests over the course of a five-month mission. This test flight was conducted after the departure of Tiangong 2’s only visiting crew – and ended with the Tianzhou spacecraft undocking and deorbiting to a destructive reentry.

The Tianzhou spacecraft is similar in function to the Progress spacecraft used by Russia (and formerly the Soviet Union) to resupply the last two Salyut stations, Mir, and the International Space Station. Cargo spacecraft play a vital role for long-duration space station expeditions by allowing provisions, replacement parts, and new scientific equipment and/or experiments to be delivered to the crew periodically. Other spacecraft fulfilling this role for the International Space Station include the US Cygnus and Cargo Dragon and the Japanese Kounotori (HTV) crafts — and formerly the European Automated Transfer Vehicle (ATV).

Like all of these spacecraft except for the Cargo Dragon, Tianzhou is designed for a one-way trip to the Chinese space station. At the end of its mission, it will be deorbited and burn up as it reenters the Earth’s atmosphere.

Tianzhou 2’s launch is the first mission to dock with China’s new space station, following the successful launch of the Tianhe core module last month. The arrival of Tianzhou 2 and the supplies it is bearing is the last major milestone before the first crewed launch to the station, currently slated for no earlier than 10 June with the Shenzhou 12 mission.

Tianzhou 2 docked at the aft port of the Tianhe module and will remain there through most of the three-month Shenzhou 12 expedition. It is carrying 4,690 kilograms of supplies and equipment for the station and its first crew, including a pair of spacesuits, crew provisions, and equipment for installation activities inside and outside of the outpost. The spacecraft is also carrying 1,950 kilograms of propellant, which can be used for maneuvering or transferred to the Tianhe core module.

Shortly after Shenzhou 13 arrives at the station in October, the crew will test the station’s robotic arm by relocating Tianzhou 2. After the robotic arm test, Tianzhou 2 will depart the space station loaded with trash and unneeded hardware for disposal.

The Tianzhou 2 mission will occur during the “Critical Technology Validation Phase” of the new space station program. This is the first of three phases of operation, lasting from the launch of Tianhe up to the departure of the second crew aboard Shenzhou 13 early next year. This will encompass checkout and preparation of the Tianhe module before the second, or “Construction Phase”, commences — during which the Wentian and Mengtain science modules will arrive. Once these have been installed, tested, and configured, the station will enter its final “Operational Phase” in 2023.

Tianzhou 2 was launched aboard a Chang Zheng 7 (CZ-7) – also known as Long March 7 – a two-stage vehicle which forms part of China’s new-generation fleet of modular rockets.

The vehicle’s first stage consists of a 3.35 meter core powered by a pair of YF-100 engines. This is surrounded by four side-mounted boosters, each with a single additional YF-100. The second stage retains the same diameter as the first stage and is powered by a single YF-115 engine.

Tianzhou 2’s launch marked the fifth flight for the Chang Zheng 7 rocket overall and the third to use the CZ-7 configuration. The other two launches used the CZ-7A variant, which adds a cryogenic-propellant third stage to enable geostationary launches. 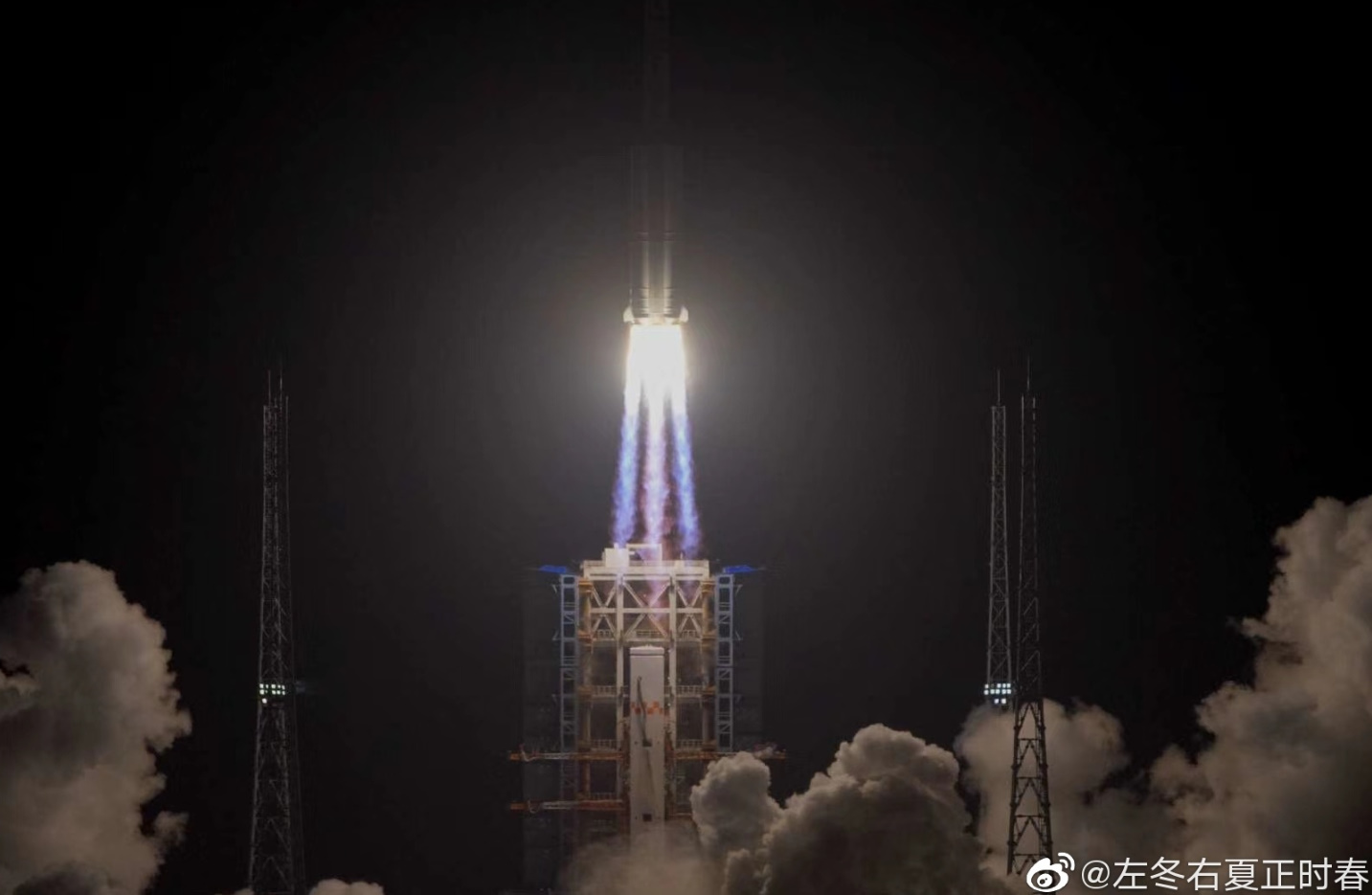 A Chang Zheng 7 lifting off from Wenchang.

The first flight of the Chang Zheng 7 came in June 2016, carrying a scaled-down prototype crew capsule to support testing for future human spaceflight projects. The rocket’s second flight, ten months later, carried Tianzhou 1 into orbit. Two CZ-7A launches took place in March 2020 and March 2021 with experimental geosynchronous satellites aboard, with the 2020 launch failing to reach orbit due to an issue around the time of first stage separation. This remains the only failure for the CZ-7 series, with an investigation determining the most likely cause to be a premature cutoff of one of the four boosters, although other reports suggested the vehicle disintegrated shortly after second stage ignition.

The Chang Zheng 7 for Tianzhou 2 is numbered Y3, reflecting its status as the third flight of the two-stage CZ-7. CZ-7A rockets are numbered separately.

Unlike the earlier Chang Zheng rockets, which used storable and highly toxic hypergolic propellants, CZ-7’s engines burn rocket-grade kerosene, oxidised by liquid oxygen. This is a cleaner, less toxic and more efficient combination which reflects the fact the rockets are purpose-built for satellite launches, whereas the previous-generation rockets were derived from ballistic missiles where the main consideration was keeping them ready to launch at a moment’s notice for extended periods of time.

Per local reports the launch of Tianzhou 2 to the CSS has been rescheduled to today at around 17:09 UTC.https://t.co/SYKm7jc9Kx

China nevertheless attracted criticism last month after the core stage of the Chang Zheng 5B rocket, launched from Wenchang to deploy Tianhe, was left in orbit to make an uncontrolled re-entry. While spent rocket stages being discarded in orbit is not unusual, the Chang Zheng 5B’s core stage was significantly larger, leading to concerns that debris might survive and reach the ground. In the end, the CZ-5B core re-entered on 9 May — with any debris that survived falling into the Indian Ocean.

With the smaller CZ-7 rocket being used for Tianzhou 2’s launch, only the smaller second stage and payload will reach orbit.

The rocket was rolled out to Wenchang’s Pad 201 on Sunday, 16 May in preparation for launch. Pad 201 is one of two launch pads at Wenchang and is shared by the Chang Zheng 7 and Chang Zheng 8 rockets. The larger Chang Zheng 5 vehicles fly from Pad 101, situated 650 meters to the southwest.

Both launch pads use vertical integration away from the pad itself. Two vertical assembly buildings are located approximately 2.4 kilometers to the north. The CZ-7 was assembled atop a mobile launch platform, which was then moved into position at the launch pad along rails. An umbilical tower mounted on the launch platform hosts the cables and lines that will be used to power, fuel, and prepare the rocket for launch, while a larger service tower at the launch pad contains work platforms to provide access for final inspection and pre-launch preparations.

China’s next launch will occur in about a week’s time, with a Chang Zheng 3B due to lift off from Xichang with the Fengyun-4B weather satellite. The next Chang Zheng 7 launch is expected in September with Tianzhou 3.

Laying the groundwork for Super Heavy amid Raptor Ramp Up