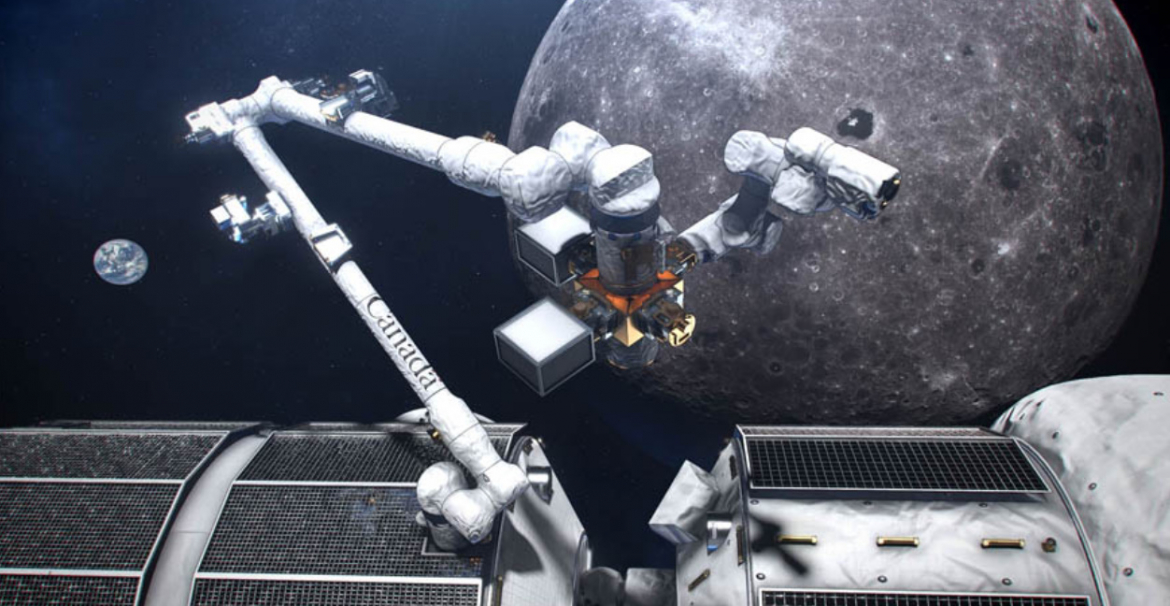 With launch just five years away, the Gateway Exploration Robotics System — better known as Canadarm3 — has arrived at a critical point where its artificial intelligence system must be properly calibrated to meet the rigorous autonomous demands the Lunar Gateway project will impose upon it.

The AI solutions sought for Canadarm3’s vision by MDA and the Canadian Space Agency (CSA) largely relate to obstacle avoidance to prevent the arm from bumping into other structures on the lunar outpost and how to work with issues like prolonged communications blackouts and less-than-optimal lighting conditions — both of which must be overcome for the Gateway.

Speaking at a recent industry day event, Chris Langley, AI Lead at MDA for Canadarm3, related some of the challenges posed to the project by the Gateway operations plan, including only one month per year of crewed occupation initially and as little as only 8 hours of communication each week.

Additionally, the Gateway will also, as of now, seek to demonstrate an autonomy goal of 21 days without human intervention — during which Canadarm3 would have to operate and perform tasks.

“The idea is to really push for a Mars forward type philosophy.  So we would have as little as one, eight hour communication window per week.  And during the rest of that, the robotics is on its own; the station is on its own.  And it all has to keep functioning,” said Langley.

Representatives from both MDA and CSA also discussed how the solutions needed for Canadarm3 differ from those in use on the International Space Station’s Canadarm2, Mobile Remote Servicer Base System, and Special Purpose Dexterous Manipulator (aka, Dextre).

Data collected by @MDA_space’s TRAIL prepares AI researchers to engage on challenges such as tasks related to collision avoidance in an on-orbit system. Download the dataset and view the webinar here: https://t.co/evbXIlOV6a #AI #SpaceTech #CDNSpace

ISS robotics are just now beginning to introduce forms of human-supervised automation that will pale in comparison to what is needed for Canadarm3.

“This leads to a lot of interesting areas where AI can be applied,” noted Langley.  “First, because we’re operating during loss of signal, we need to have that autonomous execution capability and the ability to recover from any faults that happen as we’re doing our execution.  We also need to have systems to close the loop on board.”

“One of those… so as the Gateway flexes and changes with the thermal and pressure environments, where the robotic interfaces [that Canadarm3 will grab onto and use to move around the complex] are will move slightly, so we need to close all those loops and we need it to be able to self-diagnose and work to fix issues [without human input].”

However, an equally critical element for Canadarm3’s ability to autonomously perform operations while out of communication with Earth relates to its ability to sense — or see — its environment and avoid obstacles that may be present, such as mounting brackets, experiment platforms, visiting vehicle components, handrails for astronaut EVAs (extravehicular activities, or spacewalks), etc.

To try and define these potential issues and set up platforms for obstacle avoidance AI solutions testing, MDA used their Training AI Laboratory (TRAIL) and a 6 degree of freedom robot based on Dextre to capture data on a series of maneuvers (under both nominal and off-nominal conditions) that Canadarm3 will likely be called upon to perform.

“What we’re trying to do is tease out different problems that may arise or technology gaps that may arise with Canadarm3 and how we can address them and if the right fit is AI.  And we’re not limited to just using a robot and cameras.  We’re looking at this across-the-board in terms of other elements such as the ground segment and planning of robotic motions as well.”

“Basically all the different sectors for Canadarm3, we’re looking to see if there are ways — if AI is the best solution — that we can progress the technology.”

For this specific obstacle avoidance test series, TRAIL utilized multiple cameras to capture video of the Dextre-derived robot in motion while either no obstacle (nominal) or an obstacle (off-nominal) was placed near or along its optimal path.

The robot came into contact with an obstacle (defined by MDA  as either a direct collision or a “marked as collision” event because it came too close to the obstacle) 112 times across 330 test runs.

“As we’ve been going to the program, we’ve come to realize that we have lots of data on these things, but all the data is not perhaps in a format that’s readily available to AI researchers,” said Dickinson.  “So we’ve been working with our partners at Amii to make the data as AI-enabled as possible so that researchers can then immediately take it, deploy it, and start working on different algorithms for how we can approach this problem.”

The Gateway and Canadarm3’s vision systems will have to contend with any and all possible lighting conditions, as unlike the ISS’s robotic systems that can simply wait for more favorable lighting and shadow conditions, the Gateway’s arm will not have that luxury — nor will it have the ability to wait for a human to tell it that the “obstacle” in front of it is just a shadow.

“The Gateway will see some lighting changes that will play a role in how some of the systems are developed,” said Dickinson.  “We have tried to include in the TRAIL data set a variety of lighting conditions to mimic that somewhat.”

Langley added: “On Gateway, everything is quasi-static.  So if you find yourself in a good lighting condition on the day of your operation, that’s great.  If not, you’re stuck.  You still have to do that [operation] no matter what conditions you see at the time.”

A Canadian #rover will land on the #Moon within the next 5 years to demonstrate key technologies and accomplish meaningful science. We are looking for companies to develop concepts for the rover and its science instrument(s): https://t.co/A76N8wB3Ky. pic.twitter.com/0e0lMIB2z6

Moreover, it’s not just a simple matter of just “turning on a light” at the end of the End Effector — or hand — of Canadarm3 to “see better.”

“We are planning to have illuminators on the End Effectors so we can turn on another source of light,” noted Langley.  “But it’s a real challenge.  It’s a power draw and heat dissipation issue.  Every time you have the lights on, you generate a lot of waste heat that has to be dissipated from the arm somehow.  So we need to be sort of parsimonious with how we add lights.”

While five years is a somewhat compressed timeline to arrive at a solution, it is well within MDA’s and CSA’s experience bases — and well suited to the Canadian AI and robotics industry.

Furthermore, some elements of the design that are will in flux, like the exact location of cameras outside Gateway that will be critical for autonomous arm operations, location for grapple fixture points, clearance between modules/external equipment, will become known as the architecture of the Gateway solidifies — something that will aid Canadarm3’s AI design.

The first elements of the Gateway, the combined Power & Propulsion Element (PPE) and Habitation and Logistics (HALO) modules are set to launch no earlier than May 2024 on a Falcon Heavy rocket from LC-39A at the Kennedy Space Center.

Canadarm3 is currently set to launch in the third quarter of 2026 during the Phase 2 expansion of the Gateway to include the International Partner elements; however, numerous components of its robotic interfaces will be mounted to and launched with the PPE and HALO “and potentially other aspects of the HLS in Phase 1,” noted CSA during the industry day presentation.

The Canadian Space Agency awarded MDA the contract to design, build, and deliver those interfaces earlier this month.

The overall Gateway Exploration Robotics System is part of Canada’s larger commitment to NASA’s Artemis program and lunar exploration overall.  On 26 May, CSA announced Canada’s first robotic rover to the Moon, in cooperation with NASA, that is planned to launch by 2026.