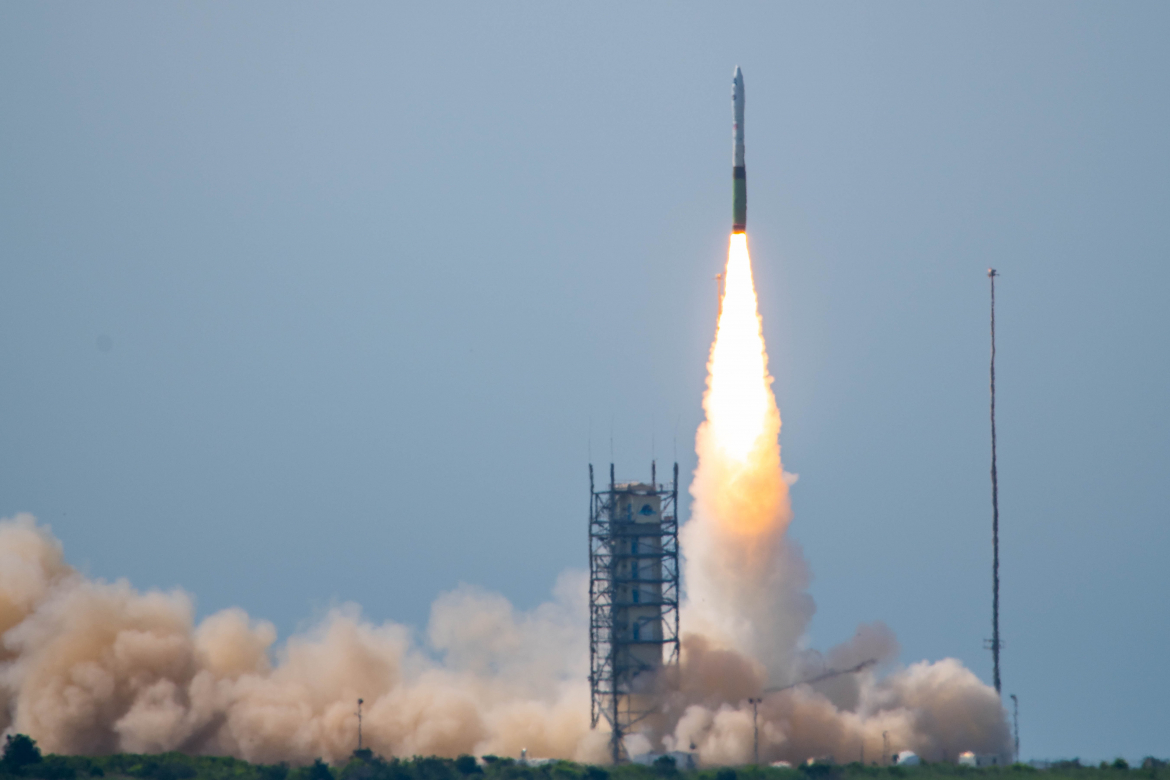 Northrop Grumman launched three national security payloads for the National Reconnaissance Office (NRO) on the NROL-111 mission. The company used their solid propellant Minotaur I rocket to place the payloads into a low Earth orbit with a liftoff from Pad-0B at the Mid-Atlantic Regional Spaceport on Wallops Island, Virginia occurring on Tuesday, June 15 at 13:35 UTC (09:35 EDT).

Due to the classified nature of the launch, nothing is publicly known about the payloads. However, the mass must be less than 580 kg, which is the max payload capacity of the Minotaur I.

In keeping with NRO tradition, the mission patch consists of a whimsical piece of artwork, a mission motto, and some clues as to the nature of the flight. For NROL-111, the patch features a wild boar in aviator gear. The NRO chose the symbol of a boar because “boars are a good spirit guide to call on when you have ambitious goals, inspiring tenacity to achieve them,” noted the NRO overview.

Furthermore, the mission patch has three large stars in the background which represent the three payloads that are onboard. 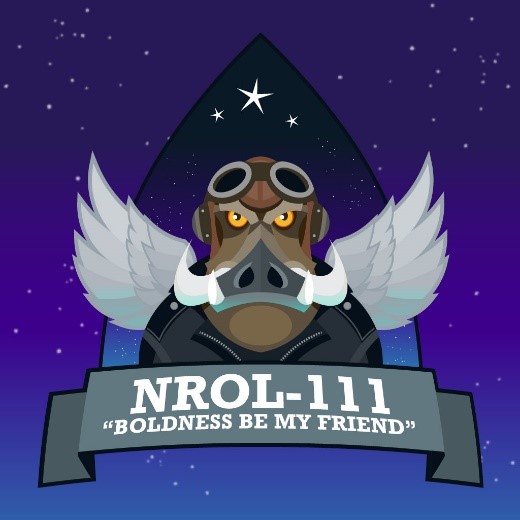 In the weeks prior to launch, Northrop Grumman conducted a number of checks and tests of the rocket, including final verification of the Ground Service Equipment (GSE), the four stages of the vehicle, the separation systems, payload fairing functionality, and payload health and readiness ahead of launch.

On launch day, the range was cleared and the director held a technical launch readiness poll. Following a 2 hour 35 minute weather delay, all teams gave their “GO” for launch.

At T0, the first stage’s M55A1 engine ignited, producing 891 kN of thrust to rapidly lift the approximately 36,000 kg vehicle off the pad.

A yellow-colored blanket — which provided thermal protection to the first and second stages while exposed on the launch pad — was attached to ground support equipment and the launch tower via guidelines. As Minotaur blasted away at a high thrust-to-weight ratio, the blanket peeled off.

The material is known as the “banana” since it peels away in sections and is yellow in color.

The high thrust-to-weight ratio — due to the former Intercontinental Ballistic Missile nature of the rocket system’s heritage — caused Minotaur to rapidly pitch over at T+2.5 seconds after a brief vertical ascent.

The pitch-over was part of the rocket’s open loop guidance that initially steered the vehicle on a pre-programmed sequence that in essence looked at what the Mission Elapsed Time since liftoff was and what the corresponding heading and pitch should be; the guidance system then used the thrust vector control on the stage nozzles to steer the rocket to the correct pitch and heading at the correct time.

The first stage burned for 61 seconds before undergoing an instantaneous staging — where it separated from the second stage at the same moment the second stage itself ignited… again a holdover from the rocket’s history as a former ICBM.

The second stage skirt then separated during the stage’s approximately 72 second burn before burning out and separating from the vehicle. The third stage solid motor ignited 2.1 seconds later for a 74 second burn that brought the rocket’s apogee to the correct orbital height while leaving the perigee substantially suborbital.

A coast phase then ensued as the rocket moved up close to apogee. Just before reaching that point, the third stage will separate and the fourth stage’s solid rocket motor will ignite. The fourth stage uses closed loop guidance — where its guidance system uses a variety of data to precisely steer the rocket based on real-time inputs.

At the completion of the approximately 68 second burn of the fourth stage, the vehicle will be in its intended orbit with payload separation following.

The Minotaur family of rockets have an extensive history in spaceflight, having first been developed by Orbital Sciences Corporation (now absorbed by Northrop Grumman) for the US Air Force’s Orbital/Suborbital Program as a low-cost Space Launch Vehicle.

The rocket utilizes a combination of proven orbital space launch technologies and government-supplied decommissioned ICBMs as a result of arms reduction treaties.

Weather is 60% favorable for tomorrow’s 7 a.m. EDT launch of the @northropgrumman #Minotaur I rocket carrying payloads for the @NatReconOfc. Cloud cover is the primary concern in the early morning.

The live stream is scheduled to begin at 6:30 a.m. EDT: https://t.co/zWY2W9VcuN pic.twitter.com/8jOitsxBVb

A successor to the Minotaur-C (previously named Taurus) launch vehicle, Minotaur I consists of a Minuteman II-derived M55A1 first stage and an SR19 second stage. Manufactured by the now-defunct Thiokol (bought by ATK Launch Systems which then merged with Orbital Sciences to form Orbital ATK… which was then bought by Northrop Grumman), the first stage produces 891 kilonewtons while the Aerojet Rocketdyne-manufactured second stage has 268 kilonewtons of thrust.

According to a GAO report in 2017, both of the motors cost around $4,277,510 — adjusted for inflation. This includes refurbishment, transportation and other mission related costs.

The Orion 50XL is an extended-length version of the initial Orion 50 solid rocket motor, with an average thrust of 118 kilonewtons. It is 45 centimeters longer and contains 207 kilograms more propellant and has a vector-able nozzle. It is also used as the second stage in the air launched Pegasus XL rocket and first flew on the Space Test Experiment Platform (STEP-3) mission on June 22, 1995; however, the motor failed in-flight, leading to a loss of mission.

The Orion 38 was developed as a low-cost, high performance third stage for the Pegasus launch vehicle and also sports a vector-able nozzle. It has an average thrust of 32.7 kilonewtons, has performed successfully in more than 80 flights over two decades of use, and first flew on the debut flight of the Pegasus rocket on April 5, 1990, delivering the Department of Defense’s payload NavySat to orbit.

An additional, hydrazine-powered fifth stage — named HAPS (Hydrazine Auxiliary Propulsion System) — can also be integrated if greater precision is needed for orbital injection or to have the capability to maneuver to deploy multiple payloads.

The optional fifth stage is not being used for this launch.