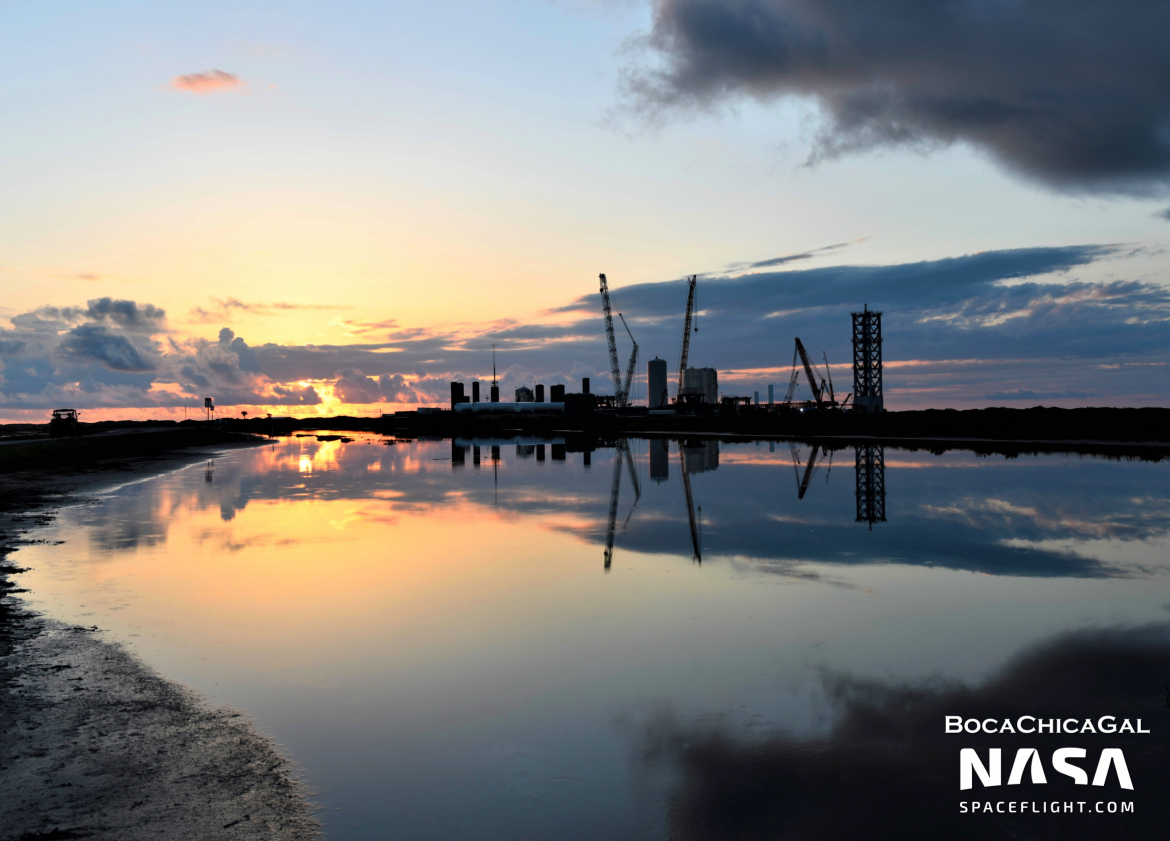 SpaceX Starbase may be lacking a rocket at the launch site, but work is still continuing apace on the construction of the Orbital Launch Site (OLS) ahead of receiving the first Super Heavy/Starship stack for an upcoming orbital launch attempt. Signs that the milestone mission is closing in can be seen at the Production Site, with sections of Booster 2 (with sections labeled BN3) and Starship SN20 undergoing preparations.

The fate of Starship SN15, following its milestone success with a smooth test flight and landing last month, is still unknown. It is likely awaiting preparations to go on display at Starbase. It is already sitting on display stands.

SN16 continues to reside in the High Bay, all but ready for rollout to the suborbital pad. However, that appears increasingly unlikely, as SpaceX focuses on the upcoming orbital attempt from the launch site next door to where SN15 completed its momentous test.

SN17’s fate is known, with sections of what was to become that Starship now observed as being scrapped at the Production Site.

Meanwhile, SN20’s aft dome has also been spotted by Mary (@bocachicagal), sporting three mounts for RVacs, indicating SN20 may be the first Starship to fly with both sea level and vacuum optimized engines.

SN20 has yet to begin stacking, which will take place inside the Mid Bay. The facility was recently vacated by the Super Heavy Test Tank 2.1.

The Test Tank has since made the journey down Highway 4 to the suborbital launch site for proof testing, a key test series that will provide important data for similar tests conducted with the first full-stack Super Heavy.

Named “Booster 2” by Elon Musk – likely because this is the second Super Heavy to become a full-stack booster following the pathfinder stacking operations with BN1 – the sections labeled BN3 continue to be stacked inside the High Bay, behind Starship SN16.

Additional preparations on Sunday saw the large downcomer being transported to the High Bay for installation. 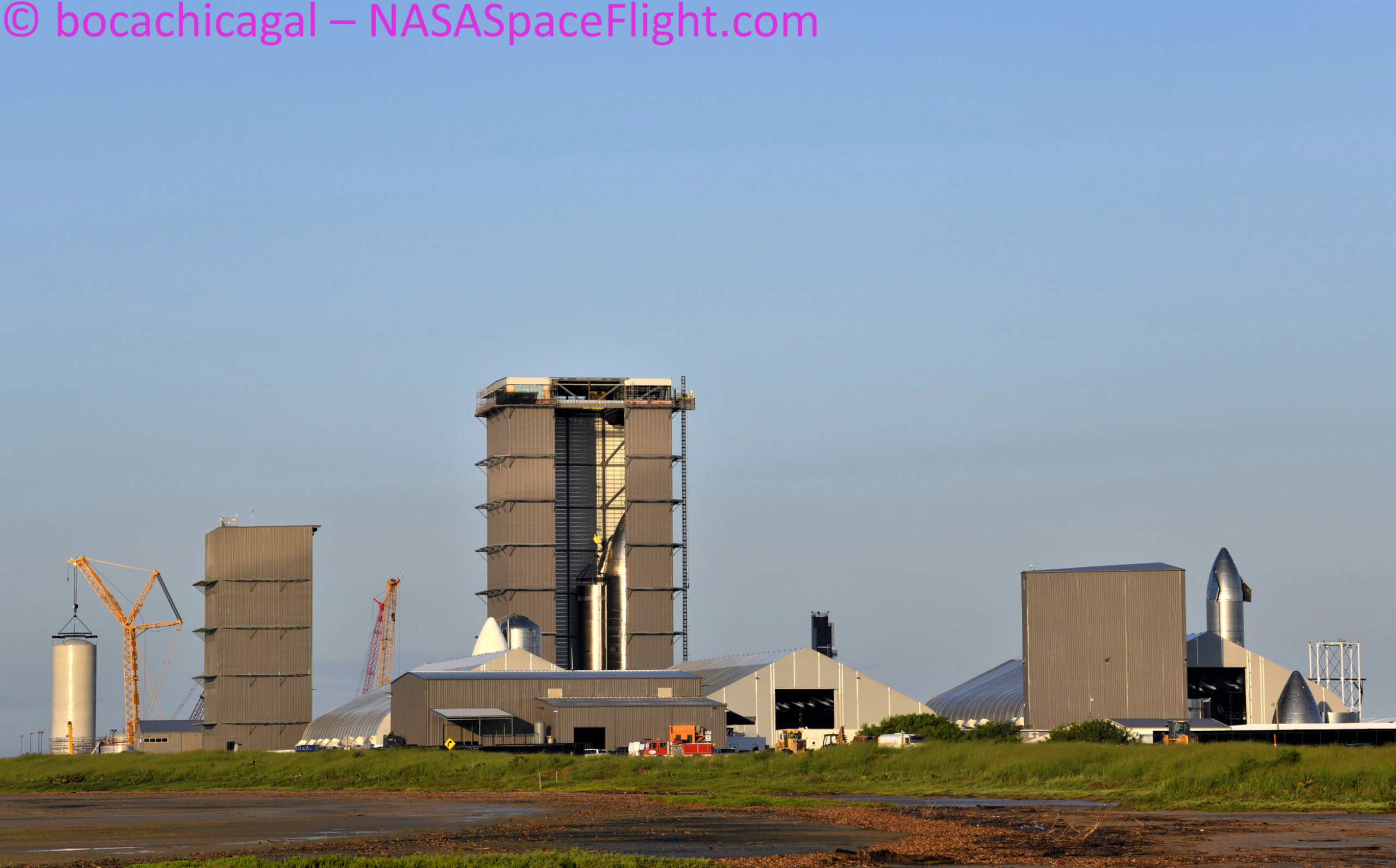 Super Heavy Booster 2 in the High Bay being stacked behind SN16 – via Mary (@bocachicagal).

It will eventually become the first Super Heavy to take a road trip to the Orbital Launch Site (OLS), which continues to be a hive of activity.

A large workforce continues to work on construction activities at the OLS, with the most dominant feature being the rise of the Launch Integration Tower required to host Super Heavy.

Three sections are now installed in-situ, with additional prefabricated sections – residing at the Propellant Production site – preparing to roll to the launch site.

The sections are being lifted into place by the LR11350 crane, which the SpaceXers nicknamed “Frankencrane” due to its variety of boom extensions from various other cranes. It recently gained an extension as the tower height continues to grow.

The tower already has the support beams for an elevator system, allowing its inner staircase to be removed.

Next to the tower, the Launch Mount now has its six extensions installed. The launch table – currently being prepared at the Production Site, is also being prepared for transport and installed on the extensions.

During this time, the third segment of the integration tower has been lifted, then fixed to the rest, thanks to the Frankencrane crane.

Liquid Oxygen (LOX) and Liquid Methane (CH4) for the huge rocket will be supplied by the Ground Support Equipment (GSE) tanks at the OLS. 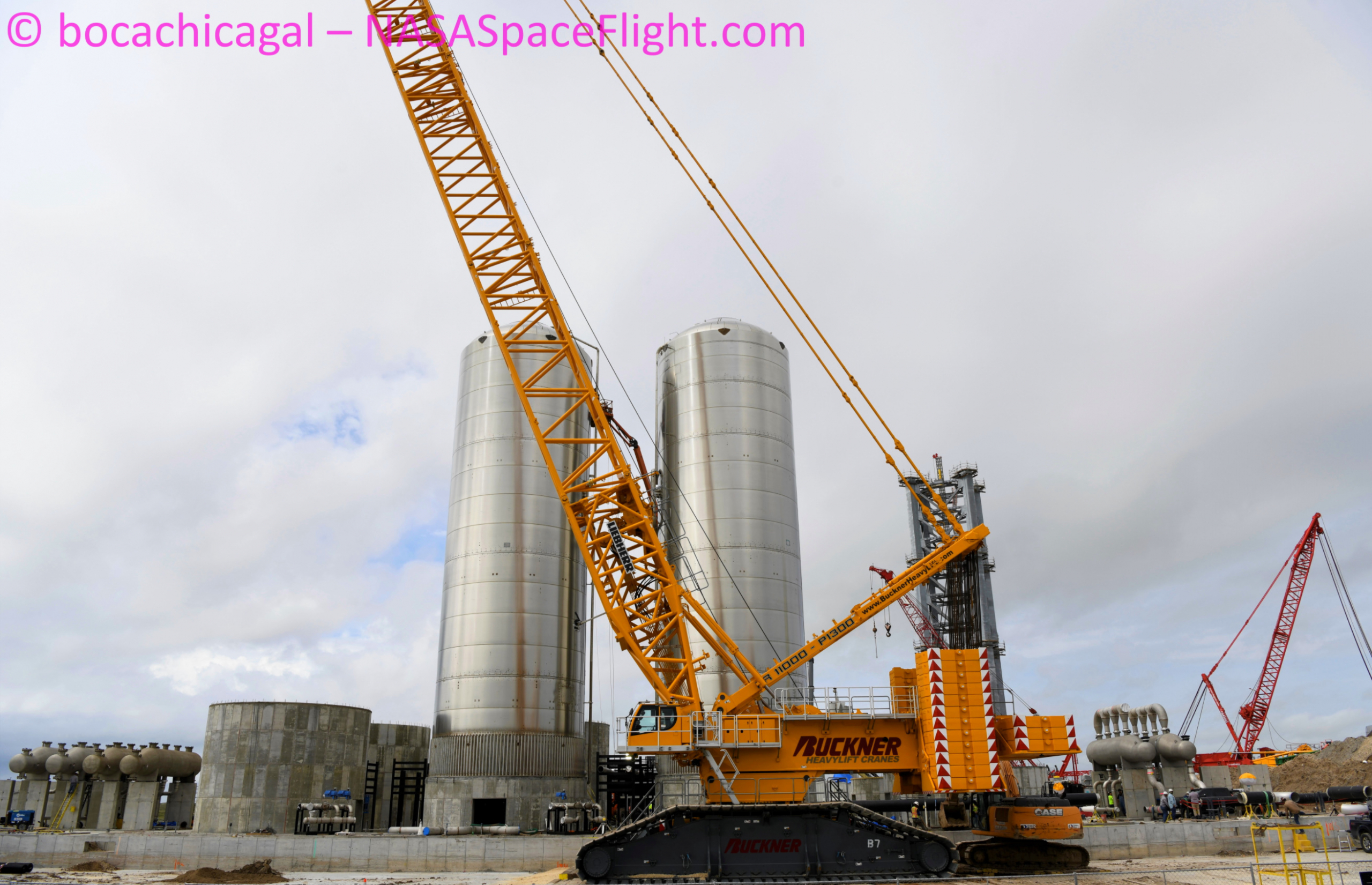 Two GSE tanks have already been installed on their supports, while a third is being prepared for transport.

A fourth GSE tank is located in one of the bays in the Mid Bay facility, while the 12m diameter Cryo Shells – which will cocoon the tanks with insulation for the cryogenic fluids in the GSE tanks, with gaseous nitrogen used as insulation between the two tank layers – are being built at the Propellant Production facility.

One Cryo Shell has already been completed and is waiting for installation at the OLS.

SpaceX’s Rocket Development and Test Facility in McGregor, Texas, is already a key facility for its Falcon and Dragon programs. It is now also tasked with firing Raptor engines produced at SpaceX’s HQ in Hawthorne, California.

Initially working from two test bays on the initial Raptor test stand, McGregor then converted the old Tripod Stand that had previously been involved with Falcon 9 booster static fire tests. 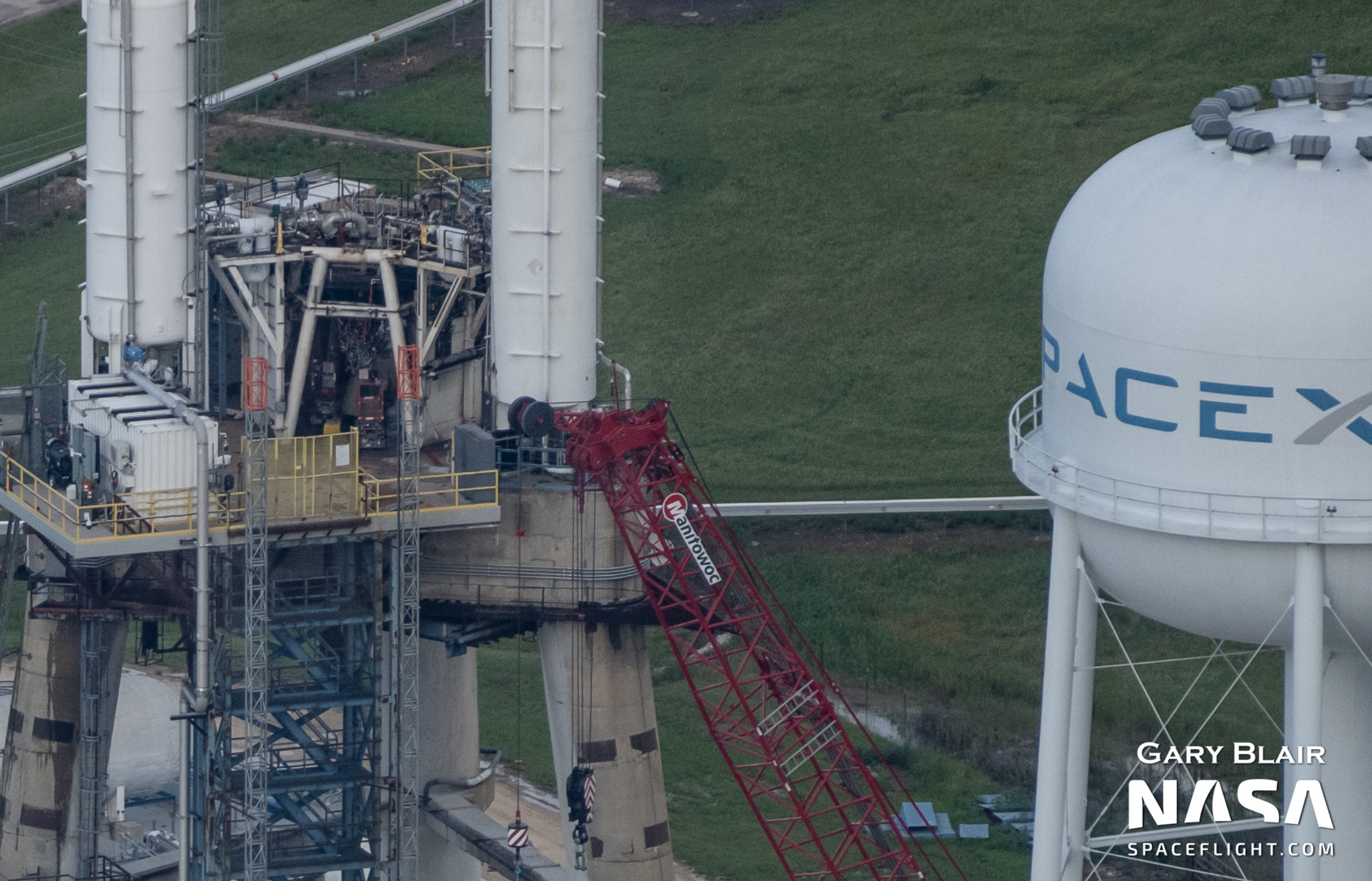 The Tripod Stand with a Raptor, as recently observed by NSF’s Gary Blair during a recent fly past.

Falcon 9 testing has since moved to a ground-level stand, and demand for such testing has decreased thanks to the continued successful return of boosters after launch.

With two horizontal bays on the dedicated Raptor stand, and one vertical bay on the Tripod stand, engine testing continued to ramp up. However, additional test capacity was required with the upcoming demands of full-stack Super Heavy and Starship launches. 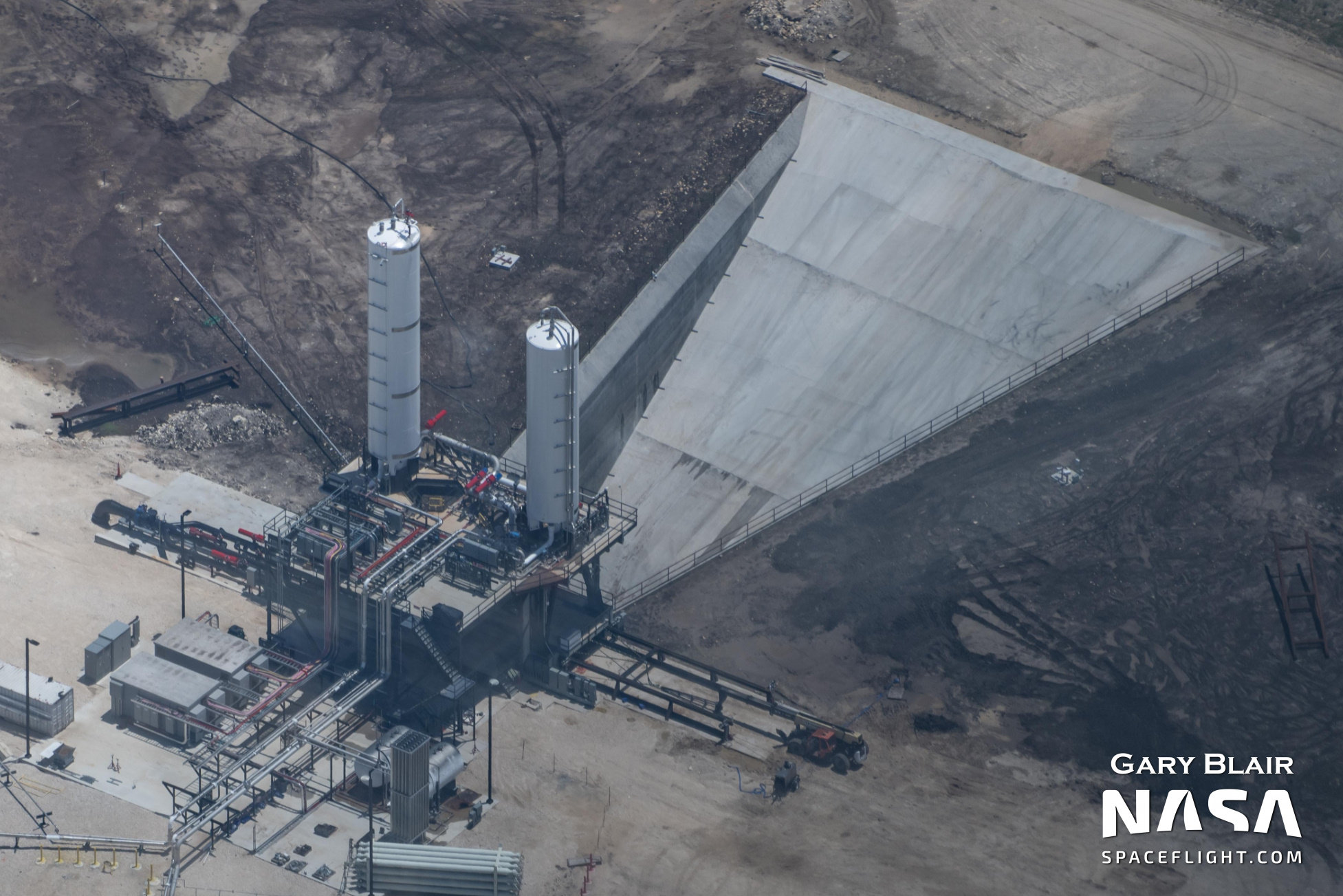 At the start of the year, groundbreaking took place next to the dedicated horizontal test stand, with construction completed just months later, as per photos in L2’s McGregor section by NSF’s Gary Blair, a local resident who passes the facility in his plane.

With fit checks undertaken late last month, the new stand was christened with a 15-second Raptor firing on Friday, according to local observer Reagan (@bluemoondance74).

This new stand will increase engine test capacity by some margin, given each of the vertical test bays available for testing both sea-level and vacuum-optimized Raptors.

Currently, only one bay of the original Raptor test stand has been used for RVac testing.

This extra capacity allows McGregor teams to conduct one engine validation firing per day, ramping up the pace of Raptor deliveries in order to accommodate Super Heavy’s tall order of 29 engines per booster, rising to 32 later in the year – all the while, this is particularly important with Super Heavy’s expendable nature in its initial test flights.

UPDATE: After publication on Sunday, NSF’s Gary Blair provided another photo from this latest flypast in L2 McGregor, this time showing another new Raptor on the original test stand, with 131 apparently – but not confirmed – on its nozzle. SpaceXers on social media later said it was letters and then a 1, a new designation for a Raptor. 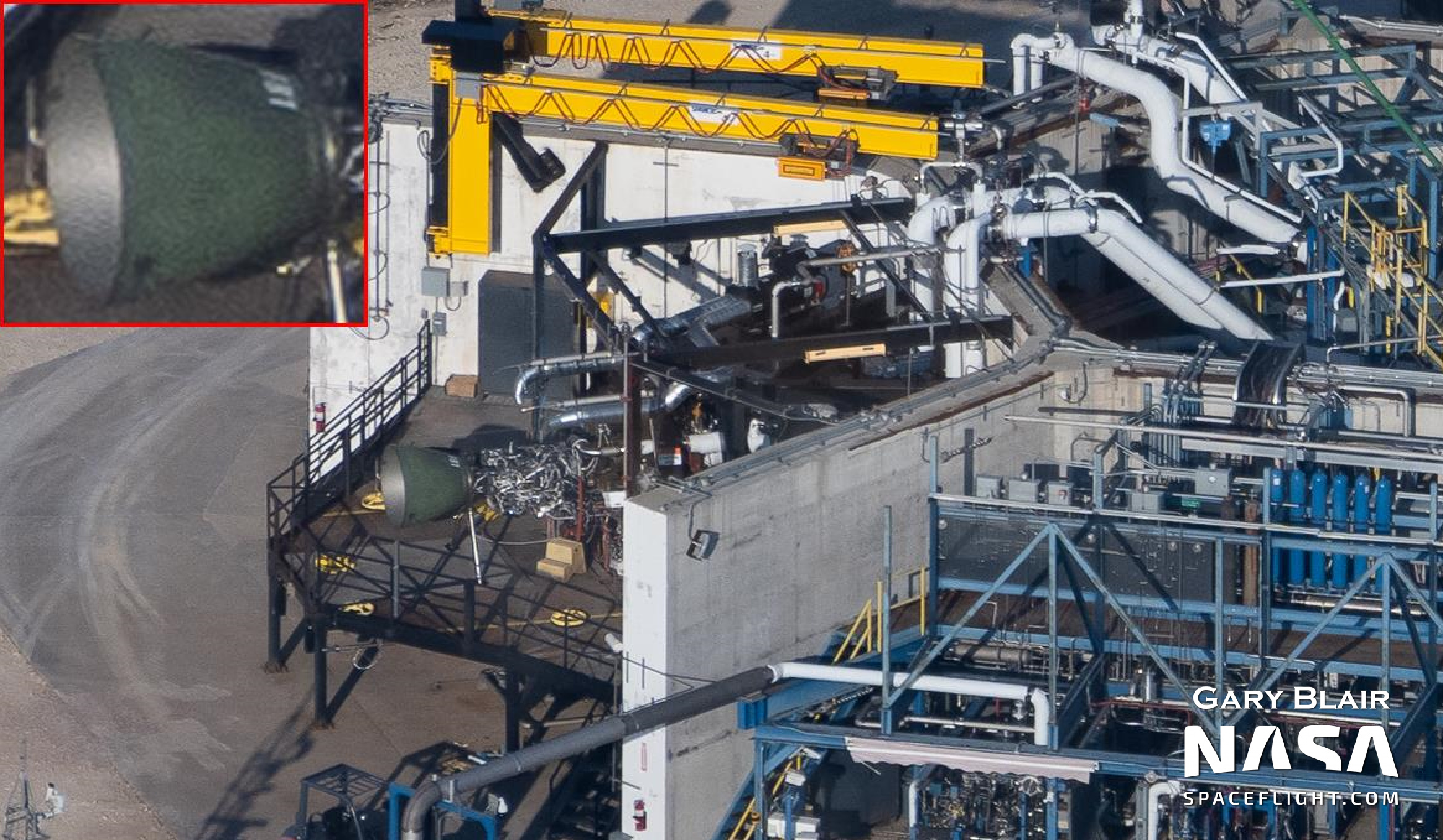 Regardless, SpaceX is clearly producing an extraordinary engine cadence, which will be required to cater for the upcoming tests.