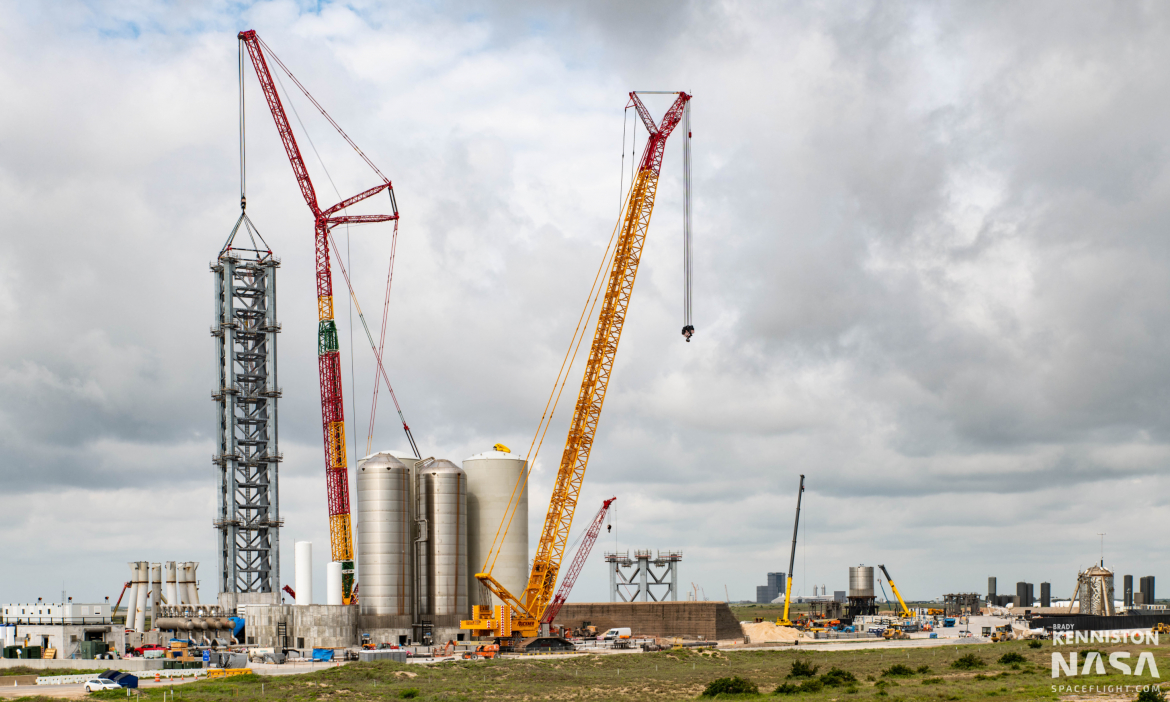 As the Launch Integration Tower at the Orbital Launch Site (OLS) continues to grow, Elon Musk has intimated a potential interim test with Starship SN16.

As SN16 was rolled out of the High Bay towards the scrapyard, most believed that confirmed that the next vehicle to roll down Highway 4 to the launch site would be the Super Heavy and Starship tasked with the first orbital attempt. However, Musk soon tweeted SpaceX might use SN16 on a hypersonic flight test.

To Retire Or Not To Retire:

Following the success of Starship SN15’s high altitude test, SN16 has been patiently sitting inside the High Bay.

Complete with nosecone and aero surfaces, SN16 could have rolled to the suborbital site weeks ago had SN16 been required for a repeat of SN15’s test or to a higher altitude.

However, with the focus firmly on uninterrupted work at the Orbital Launch Site (OLS) – which an SN16 test campaign would have impacted – the lack of SN16 movement pointed to the overall thinking that SpaceX was firmly focused on the full stack orbital test, currently set to involve “Booster 2” (which includes BN3 parts) and Starship SN20.

With Booster 2 undergoing stacking operations inside the High Bay, SN16 was finally rolled out at the Production Facility and set on the road towards the scrapyard.

Shortly after SN16 met up with the retired SN15, Musk reacted to Jack Beyer’s (@thejackbeyer) incredible photo of the duo, noting that SN16 may yet gain a reprieve.

“We might use SN16 on a hypersonic flight test,” which came to the surprise of most of the community that was unaware such a test was under consideration.

A hypersonic test would involve a fueled starship that accelerates to far greater speeds compared to the hop tests, which throttled down to the extent that Raptors were shut down in sequence ahead of the flip around.

Such a test will be used to experience aerodynamic forces that the structure would have to endure during orbital launches and fly closer to the conditions of reentering from orbital speeds, providing vital data ahead of SN20’s orbital flight.

This also beckons the question about the Thermal Protection System (TPS) tiles that will fly with SN16 should the hypersonic test become confirmed. SN16 has large patches of TPS, far more than SN15, although not yet enough for an orbital re-entry.

With the fate of SN16 still in the air – and Musk tweeting of a Possible hypersonic test flight while SN16 appeared to be moving toward early retirement – all eyes will be on the FAA to see if any documentation points at a test that is being fully planned.

All eyes will also be on Musk’s Twitter replies, as per usual.

For now, the official stance is focused on the progression from SN15’s success into the ambitious orbital demonstration flight.

As previously documented to involve Super Heavy BN3 and Starship SN20, those vehicles are currently in the midst of being processed at the Production Site.

BN3, since renamed “Booster 2” by Musk, is being stacked in the High Bay. The latest stacking operation involved the Aft Section, hoisted by the recently installed Bridge Crane.

The Starship test plans are fluid and subject to change. More will be known once the vehicles take up their position at the OLS.

Back at the launch site, the test article for Super Heavy boosters, called BN2.1, has been tested twice.

During the tests, engineers filled the tank with liquid nitrogen and raised the pressure to verify the weld and structural integrity of the concept.

The Orbital Demonstration flight will be the first launch from the OLS, converted from a spare plot of land next to the Suborbital Pad into a hive of construction activity.

The centerpiece of the OLS is the Orbital Launch Tower, which continues to rise into the South Texas skyline with Sections 4 and 5 recently lifted and installed on the tower.

The fast pace of construction has already seen section 6 rolled to the OLS and it is currently sitting next to the Tower, waiting to be lifted by the giant LR 11350 crane, nicknamed by the SpaceXers as “Frankencrane.”

Section 7, which could be the last of the matched sections, is already under construction at the Propellant Production Site.

However, Brady Kenniston spotted the initial construction of another section on Monday.

Pieces for the 8th Launch Tower section arrived this morning and are already being built on the transport stands.

Back at ground level, a giant winch – which was taken from Phobos, one of the SpaceX oil rigs being converted to be used as ocean spaceports – has been attached to the base of the tower and is most likely for the crane on top of the tower which will be used for Starship and Super Heavy stacking.

This past week also marked the dismantling of one of the initial famed cranes at the launch site, with the LR1600 “Tankzilla” being prepared to depart, ahead of being replaced by the LR11000 for the construction of the OLS.

As documented by Mary (@bocachicagal), SpaceX also received the delivery of a brand new wind radar earlier this month.

It will further help SpaceX track the conditions and winds at higher altitudes in Boca Chica and find the right spots to launch Starship in the future, compared to the previously used method, which was using weather balloons on launch days. However, the installation of the radar so far has not taken place.

This comes after SpaceX proposed to the FAA to change the wind model for future launch authorization, in the light of the investigation after the SN8 launch violation.

A key center for the future of Starship launch cadence is SpaceX’s Test Center at McGregor, Texas.

Used for both Merlin and Raptor tests, photos from NSF’s Gary Blair in L2 McGregor showed SpaceX had prepared another Raptor engine with a vacuum nozzle extension on the horizontal test stand. 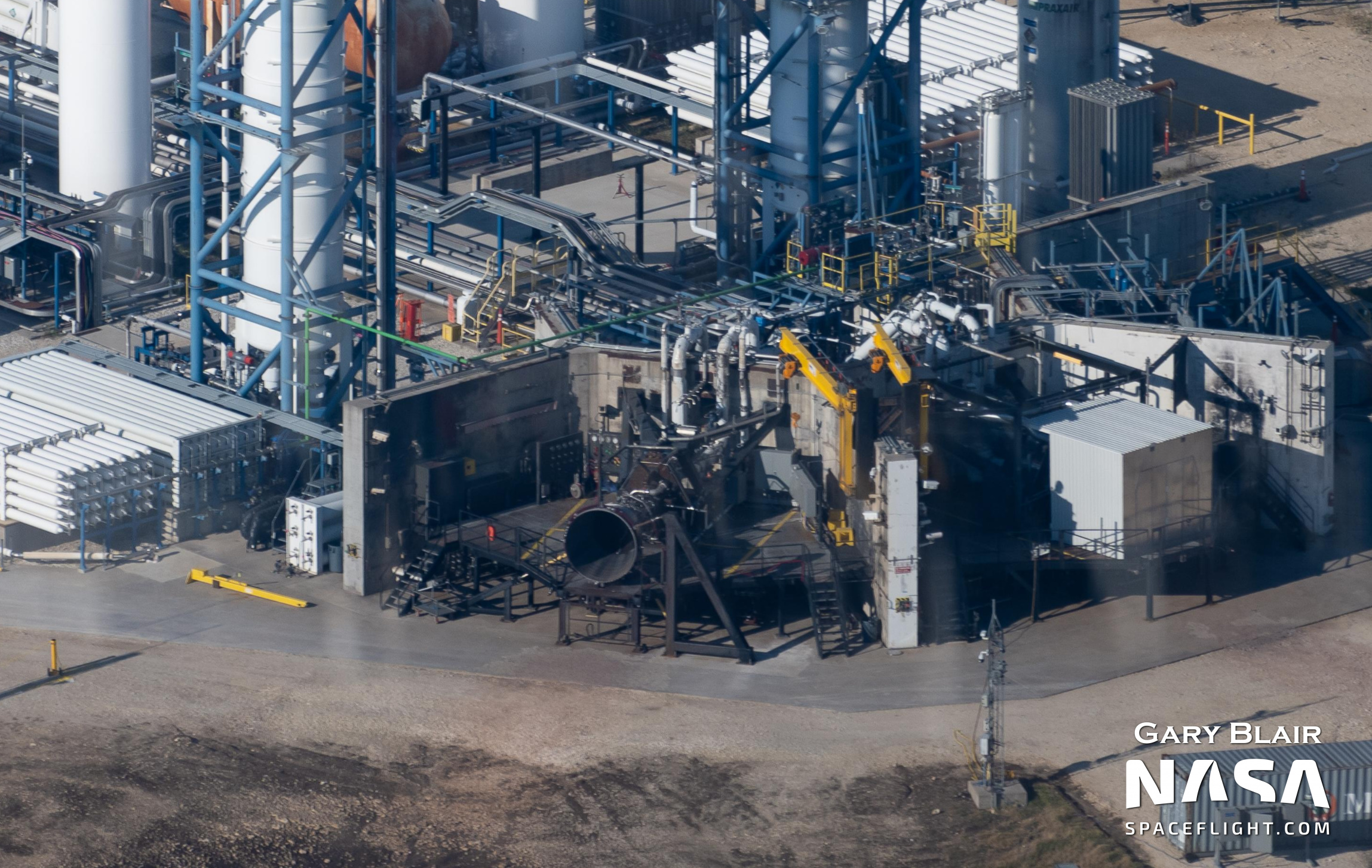 While no sea level Raptors were seen on the test stands during Saturday’s pass, SpaceX has shown rapid pace with sea level Raptor production in the past, which will be required for upcoming Super Heavy test flights.

McGregor has already supplied engines up to SN74, with that engine seen arriving into Starbase along with SN72 last week.

The Raptor Van is making almost daily trips on the Texas highways between the two sites, meaning the stock of Raptors already at Starbase could be in double digits.

Near the Raptor test stands is a facility that SpaceX is currently using to test Starship and Super Heavy RCS thrusters.

On his weekly flight, Gary Blair spotted the potential test stand for these hot gas thrusters used to steer the ship and booster to their destinations. 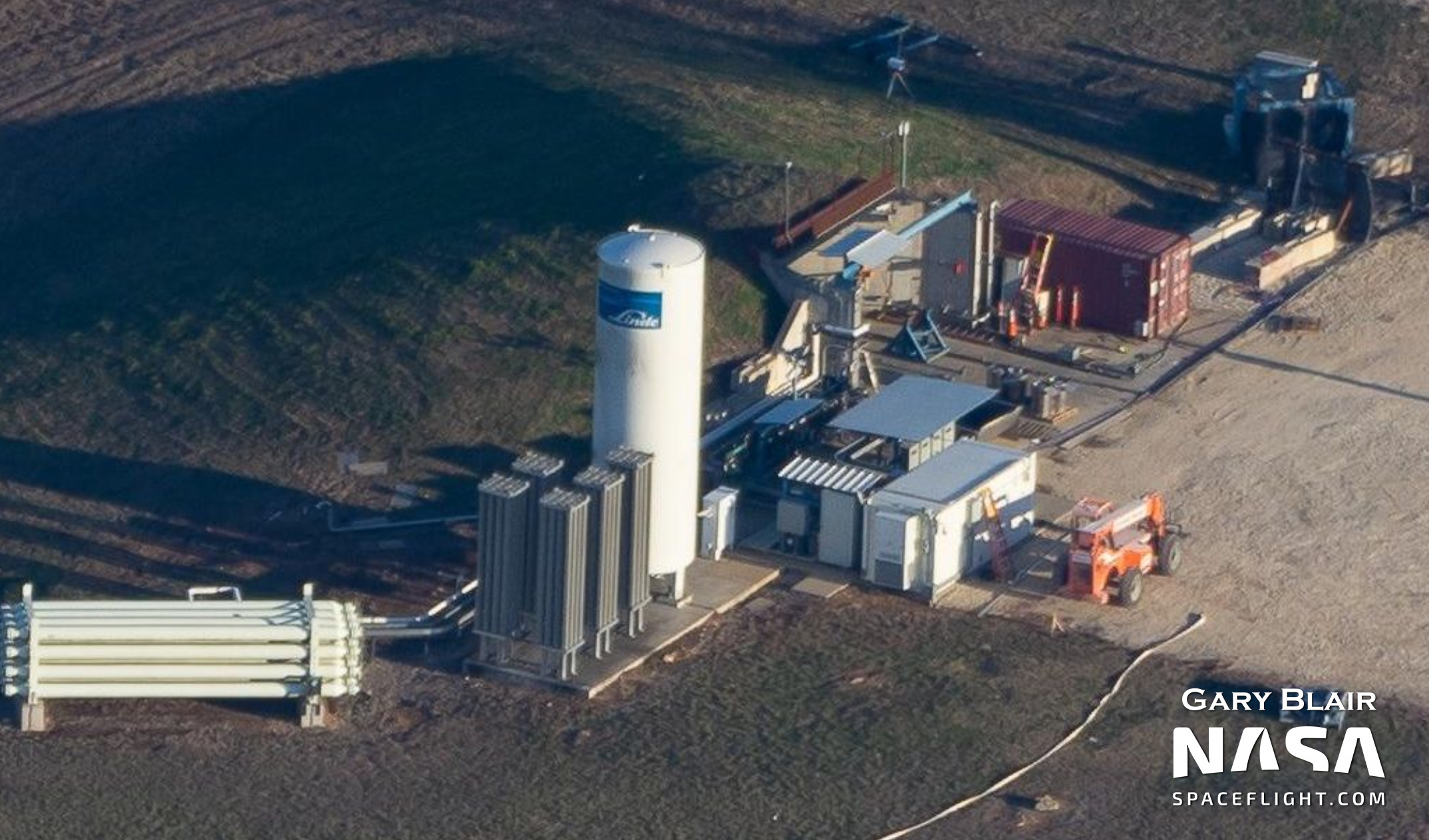 The RCS Test Stand – via Gary Blair for NSF/L2

As Elon Musk mentioned on Twitter, SpaceX currently aims to have the hot gas thrusters ready for the first orbital test flight.