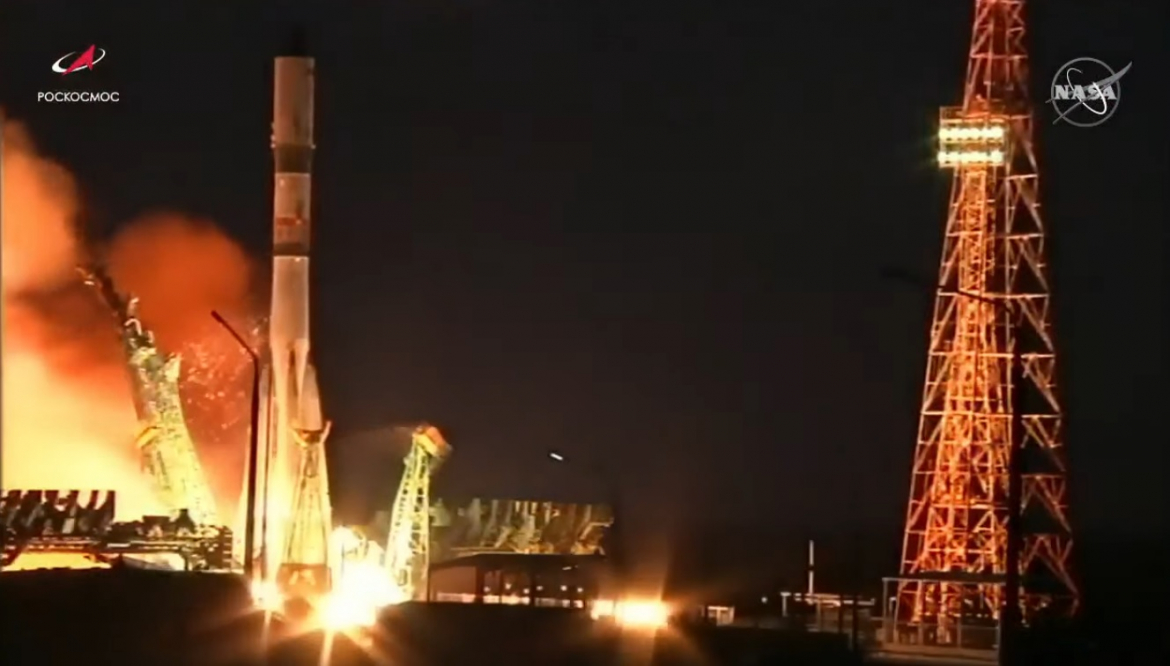 Roscosmos has launched their latest resupply mission to the International Space Station, Progress MS-17.  The launch occurred at 23:27 UTC on June 29 from Site 31/6 at the Baikonur Cosmodrome in Kazakhstan.

In early March 2020, the Progress MS-17 spacecraft arrived at the Baikonur Cosmodrome after traveling from the RSC Energia manufacturer by rail. On March 11, 2020, the spacecraft was moved to Site 254, a large facility originally built for the Buran program.

Site 254 was converted for Soyuz and Progress pre-flight processing in the 1990s after the fall of the Soviet Union.

LAUNCH! Progress MS-17 is on its way to the ISS on a resupply mission. Riding on a Soyuz-2-1a from Site 31/6 at the Baikonur Cosmodrome.

Towards the end of May, the Progress spacecraft was moved to an anechoic chamber, in which the spacecraft’s rendezvous and docking equipment was tested. This includes the Kurs-NA docking system. This anechoic chamber is used for both Progress and Soyuz spacecraft to simulate an environment in space to test radio equipment.

Around May 30, pneumatic vacuum tests were also completed on the Progress MS-17 spacecraft. On June 8, RSC Energia announced that leak tests on the spacecraft were completed.

After being weighed, the Progress spacecraft was sent to site 91A on June 16 to be fueled with compressed gasses and propellant.

Also on June 16, Roscosmos announced that the first and second stages of the Soyuz 2.1a rocket had been integrated in the assembly facility nearby the site 31/6 launch site. The first stage of the Soyuz rocket are the four strap-on boosters. The second stage is the central core.

Progress MS-17 returned to site 254 from site 91A after the completion of fueling operations on June 19. After arriving back, the spacecraft was installed on a dynamic test stand. 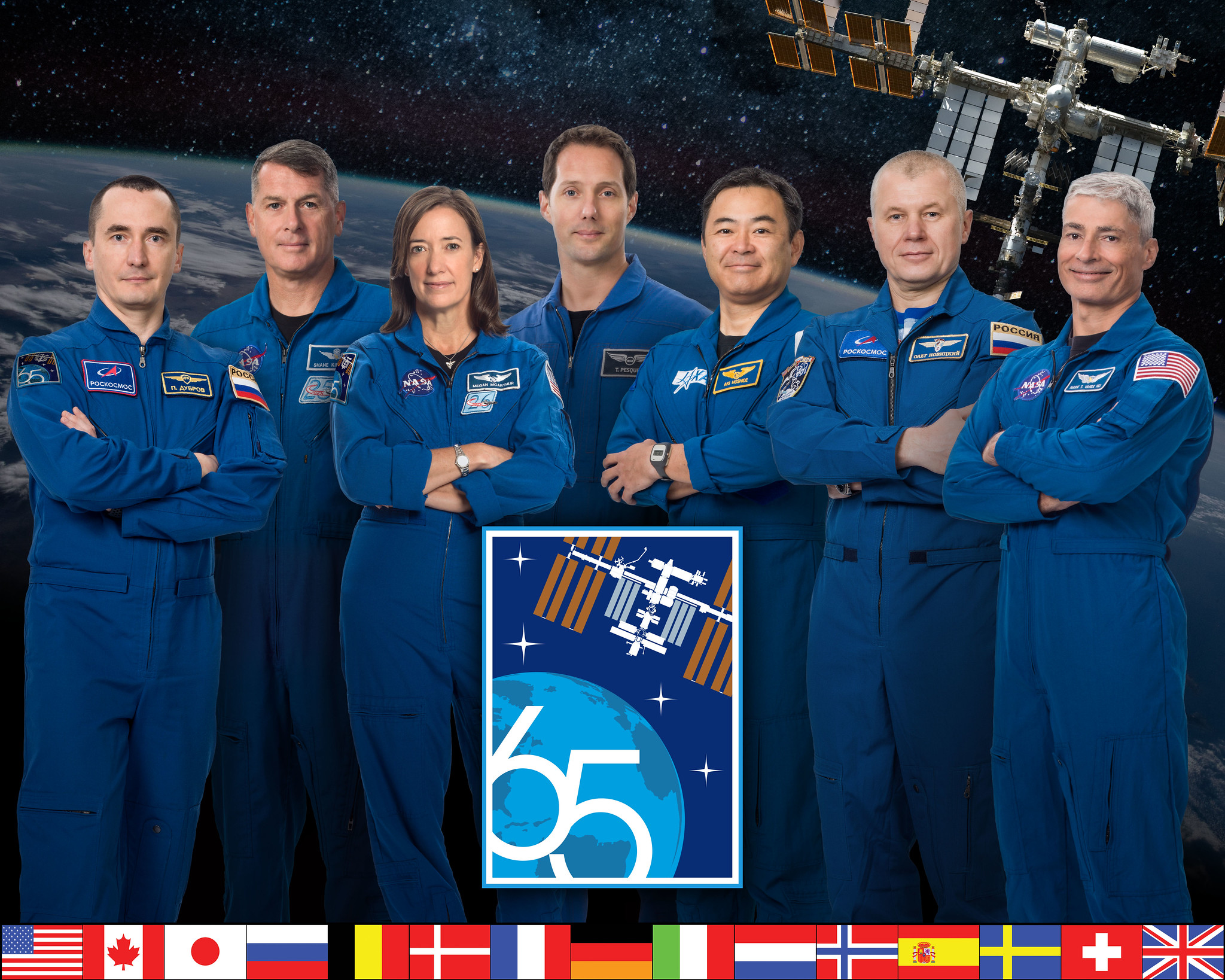 The crew of Expedition 65 – via NASA

Progress MS-17 will deliver 420 liters of drinking water, 470 kilograms of fuel, 40 kilograms of air and oxygen, and 1,509 kilograms of other equipment including clothing, food and various other items to the ISS.

Progress MS-17 was inspected and encapsulated within the payload fairing on June 24. The fairing has a special logo on it to commemorate the 75 anniversary of RSC Energia, which was founded on Aug 26, 1946. RSC Energia is the manufacturer of Soyuz and Progress spacecraft. 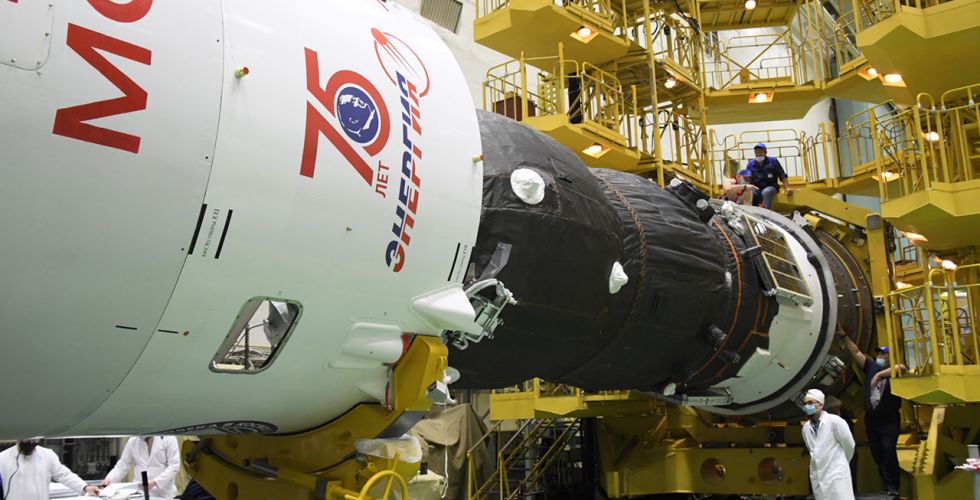 The same day, the third stage and the Progress were mated with the rest of the launch vehicle.

The Soyuz 2.1a rocket was rolled out from the assembly building and was transported to the launch pad at site 31/6 on June 27. After arrival to the pad, the rocket was raised to the vertical position and both launch gantries were raised.

The Baikonur Cosmodrome is one of the oldest and most active spaceports in the world. Based in Kazakhstan, Baikonur was originally used as a ICBM launch site, but in October 1957 at the Site-1/5 launch pad, it became home to the launch site of the very first artificial satellite, Sputnik 1.

Later, Baikonur became the home to many historic missions including the first dog in space on Sputnik-2, first flyby of the Moon on Luna-1, the first crewed spaceflight on Vostok-1, the first female in space on Vostok-6, the first lander to land on Venus with Venera 7, and the first space station with Salyut-1.

Today, Baikonur is primarily used for the Soyuz rocket. Until May 2020, Baikonur was also the sole launch site for any crew missions to the ISS. Site 1/5 aka Gagarin’s Start was retired in September 2019 with the final launch of the Soyuz-FG on the Soyuz MS-15 mission. With the retirement of Site 1/5, the Soyuz spacecraft and Progress are now solely launched from Site 31/6.

Site 31/6 was first used in January 1961 as a R-7 ICBM launch site. When the R-7 underwent the transition from ICBM to a space launch system, Site 31/6 also went through the same transition. In the early 2000s, Site 31/6 had modifications done to allow the Soyuz-2 to launch from Site 31. In October 2006, the first Soyuz-2 successfully reached orbit from Site 31/6. Site 31/6 is currently one of three Soyuz-2 launch sites. 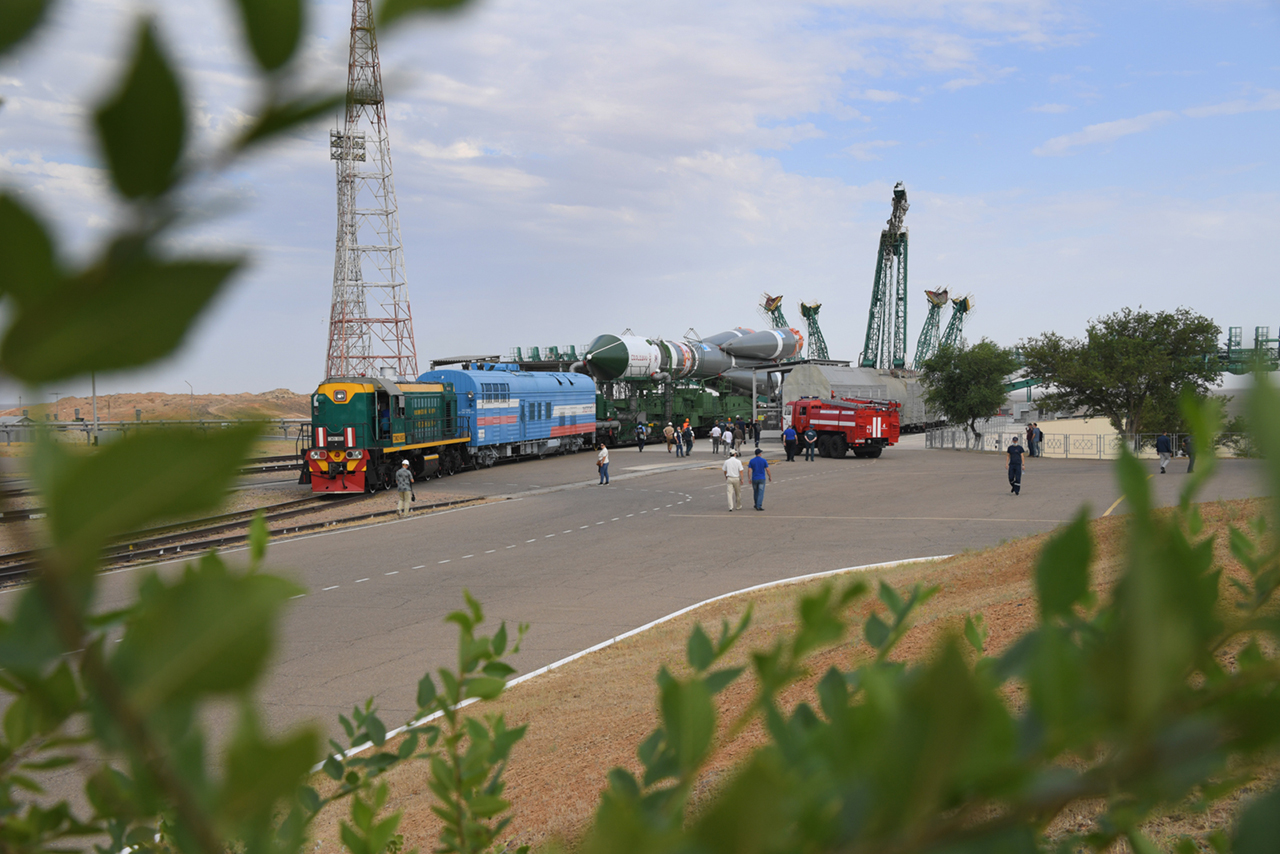 The Soyuz 2.1a with Progress MS-17 arrives to the pad – via RSC Energia

Shortly after launch, the Soyuz 2.1a rocket pitched and rolled onto the appropriate azimuth to take it to the needed 51.6 degree inclination. The Soyuz 2.1a traveled east over Kazakhstan and Russia.

Next, the first stage boosters separated, in a formation known as the Korolev cross. Then, both payload fairing halves separated, after the launch vehicle passed through the most dense levels of the atmosphere.

The RD-0110 engine will then ignite briefly prior to the separation of the second stage. Soon after, the tail section on the third stage will separate.

The third stage then inserted Progress MS-17 into a nominal orbit. After engine shutdown, the stage separated from the Progress spacecraft. Following separation, solar panels and antennas deployed including those for the Kurs-NA rendezvous and docking system, and the docking camera.

At this point, the spacecraft was in communications range with the Vostochny Cosmodrome, located in the Amur Oblast in eastern Russia.

The Progress spacecraft arrived at the station on Thursday, July 1. Progress MS-17 performed an autonomous docking to the Zenith port on the Poisk module.

Near the end of Progress MS-17’s mission, Progress will undock from Poisk and dock to the newly added MLM Nauka module. Nauka will be the latest installment to the ISS, replacing the Pirs module when it is deorbited with the Progress MS-16 spacecraft.

Nauka has recently undergone several tests to prepare the module to be launched to space. In May 2021, all testing was completed and final launch preparations began.

Specialists assembled and tested the #Nauka module, its payload fairing and the transfer compartment as part of the ascent unit: https://t.co/Bfhy1ofDXN

⛽️ The module will be installed on the transportation unit and sent to the filling station of Site 31 pic.twitter.com/KnuxNIg6qo

On May 20, the European Robotic Arm (ERA) was installed on Nauka. On June 5, Nauka’s solar arrays were attached. On June 21, Nauka was mated to its Proton-M launch adapter. A week later, Nauka was encapsulated in its payload fairing.

Next up for Nauka will be propellant loading. Once complete, it will be integrated to its Proton-M launch vehicle, which also began its final assembly in June. Once assembled, Proton will be taken to the Site 200/39 launch site and placed vertically. It will launch on July 15, with a docking to the orbiting lab on July 23.

Nauka will be used as a multipurpose science laboratory. Later it will also be home to a new Russian module called Prichal. Prichal will allow for four docking modules.

Targeting October 27, Progress MS-17 will relocate from the Poisk docking module to the Nauka docking port. After about a month docked to Nauka, Progress will undock along with a Progress docking adaptor for Nauka. Then the spacecraft will deorbit, completing its six month mission.

Soon after Progress’ undocking, Prichal will be launched on a modified Progress spacecraft, Progress M-UM. It will dock sometime in November.