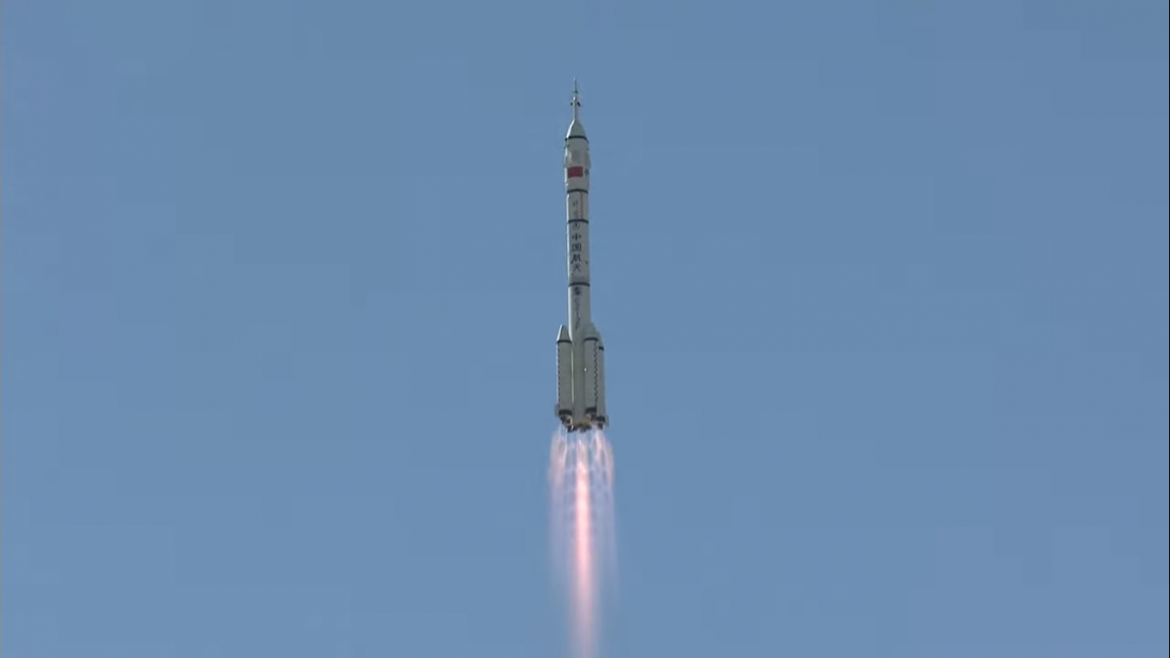 The first crewed mission to the new Chinese Space Station has successfully launched. Shenzhou-12, carrying three taikonauts, lifted off on Thursday June 17 at 01:22 UTC from the Jiuquan Satellite Launch Center in the Gobi Desert in northwest China.

Shenzhou-12 launched on top of the human-rated Long March 2F vehicle, which is based on the retired Long March 2E rocket formerly used to launch geostationary satellites. Also known as the Chang Zheng 2F (CZ-2F), the launcher is equipped with two stages and four liquid rocket boosters, all fueled by nitrogen tetroxide and unsymmetrical dimethylhydrazine (UDMH).

These hypergolic fuels are very toxic, which would become a significant problem if the rocket’s remains were to impact a populated area. Future Chinese launch vehicles are being designed to avoid using these propellants.

The vehicle is also equipped with a Soyuz-style fairing, with grid fins and a solid-fueled escape motor on top, to ensure that the crew would be able to escape a failing booster. This technology is based on the abort system used on the Soyuz carrier rocket, which has been used a few times over the years to save flight crews, most recently the Soyuz MS-10 crew in October 2018.

Like the abort system, the Shenzhou spacecraft that will be flying to the new Chinese space station this week draws heavily on Soyuz technology. Shenzhou was approved in 1992 as part of the Chinese human spaceflight initiative known as Project 921, and has a design layout very similar to the long-serving Soyuz spacecraft built in Russia. 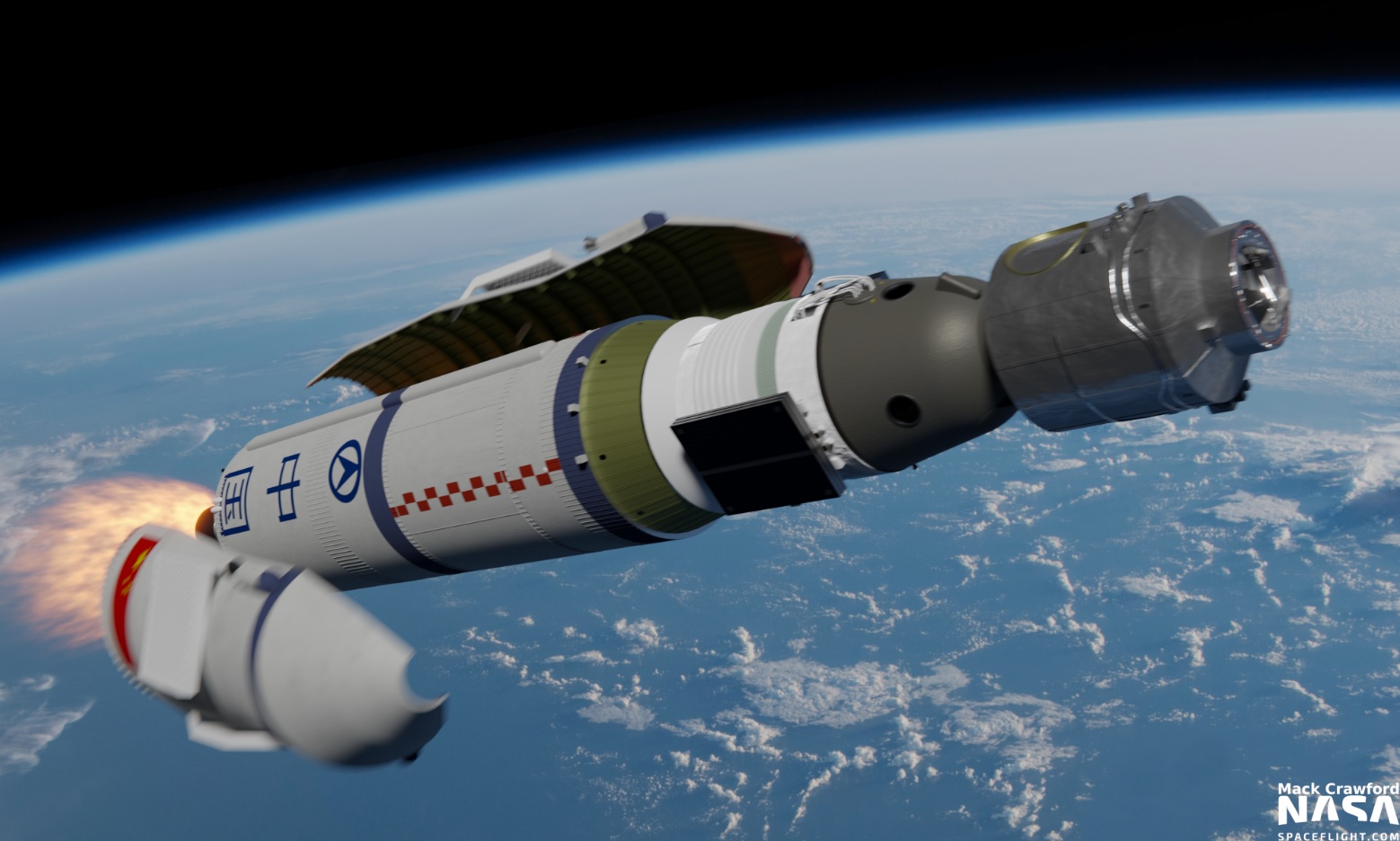 In the front of the spacecraft, the orbital module for Shenzhou-12 and future spacecraft contains an androgynous docking ring based on Russian APAS technology (used on ISS), which will be used to dock to the Tianhe core module. In the middle, the descent module containing the crew is a scaled-up version of the Soyuz descent module with a very similar mold line. The rear of the spacecraft is a service module equipped with engines, fuel tanks, and solar panels, much like the Soyuz and Progress spacecraft.

The mission will be commanded by Nie Haisheng, who is making his third spaceflight. He has previously flown on the Shenzhou-6 and Shenzhou-10 missions, the latter flying to the Tiangong-1 space station in 2013. Nie, from Hubei province, is 56 years old and is a major general in the People’s Liberation Army Air Force (PLAAF). At the end of this mission, he will have spent approximately 114 days in space, becoming the all-time Chinese record holder for the longest time total in space.

Nie is accompanied by two crew members, referred to as “operators.” The first Shenzhou-12 operator is Liu Boming, 54, from Heilongjiang, who previously flew on Shenzhou-7 in 2008 and became a participant in China’s first ever spacewalk. The  second is Tang Hongbo, who like Liu, is also a PLAAF fighter pilot. Both crewmembers and their commander will stay on board the new space station for approximately 90 days before coming home in September.

The three crew members, wearing launch and entry suits based on a reverse-engineered Sokol suit provided by Russia, will walk out past military officers and a crowd of well-wishers and board a bus to the launch pad. After boarding the Shenzhou descent module crew compartment, they’ll launch on a 41 degree inclination relativie to the equator, into an orbit that will end up 370 kilometers in altitude to rendezvous with the Tianhe space station core module. 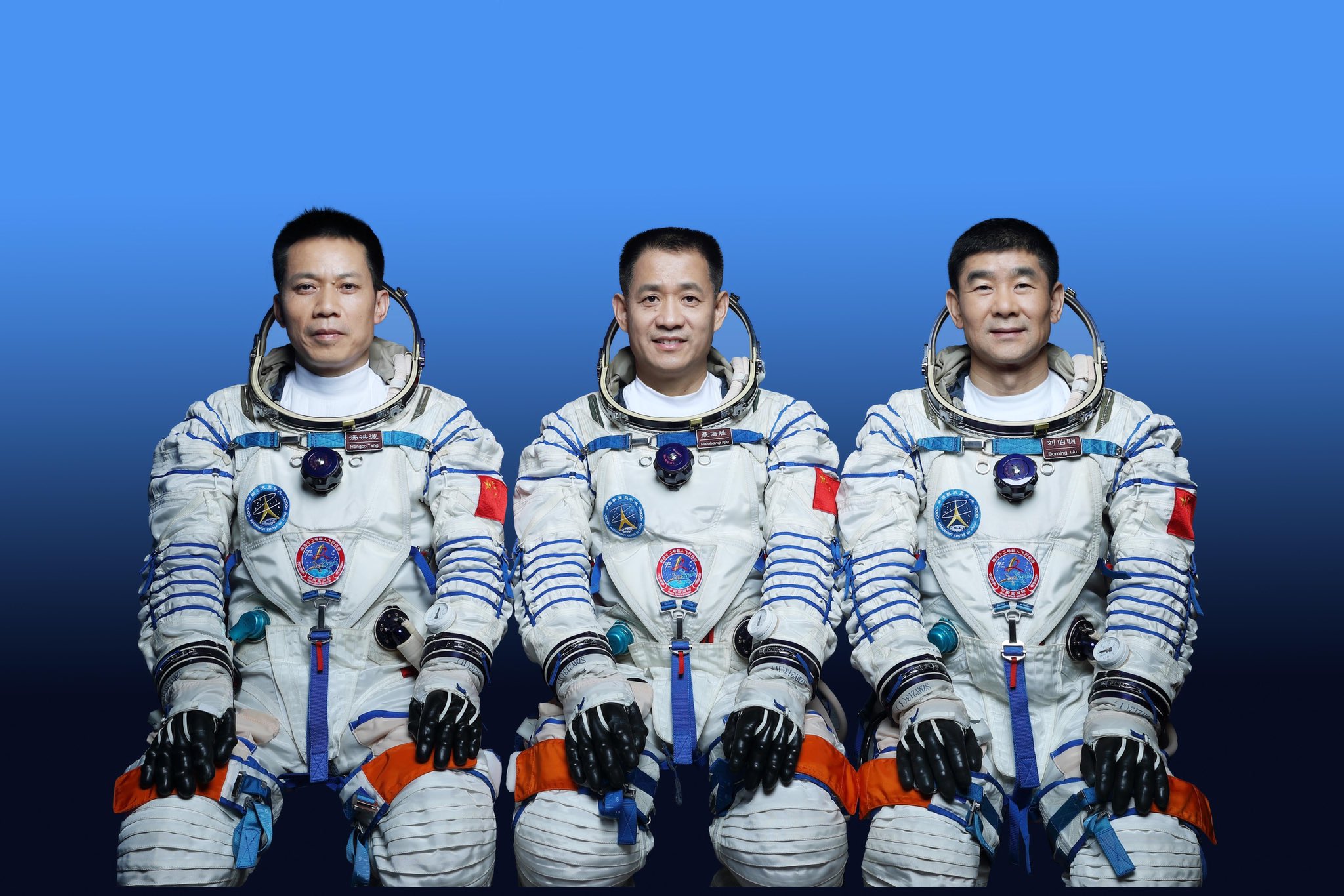 The Shenzhou-12 mission is the first crewed mission by the Chinese space program in five years and the seventh overall mission of the Shenzhou spacecraft, which conducted its first crewed flight in 2003. For comparison, the seventh U.S. crewed spaceflight was Gemini 3 in 1965, the first flight of the new two seat spacecraft commanded by Gus Grissom, with John Young as the pilot. The seventh Soviet crewed spaceflight was Voskhod 1 in 1964 which flew three cosmonauts in a spacecraft based on the Vostok but with modifications and the ability to fly multiple crewmembers.

The first mission in this series was the launch of Tianhe in April. The next was the launch of Tianzhou-2 late last month. The Tianzhou is a robotic cargo spacecraft based on the Tiangong-1 mini space station, and fulfills a similar role to the Chinese program that Progress and Cygnus fulfill for ISS.

The Tianzhou-2 cargo ship was filled with supplies for the Shenzhou-12 crew and had to dock successfully to Tianhe before the Shenzhou mission could go ahead this month. 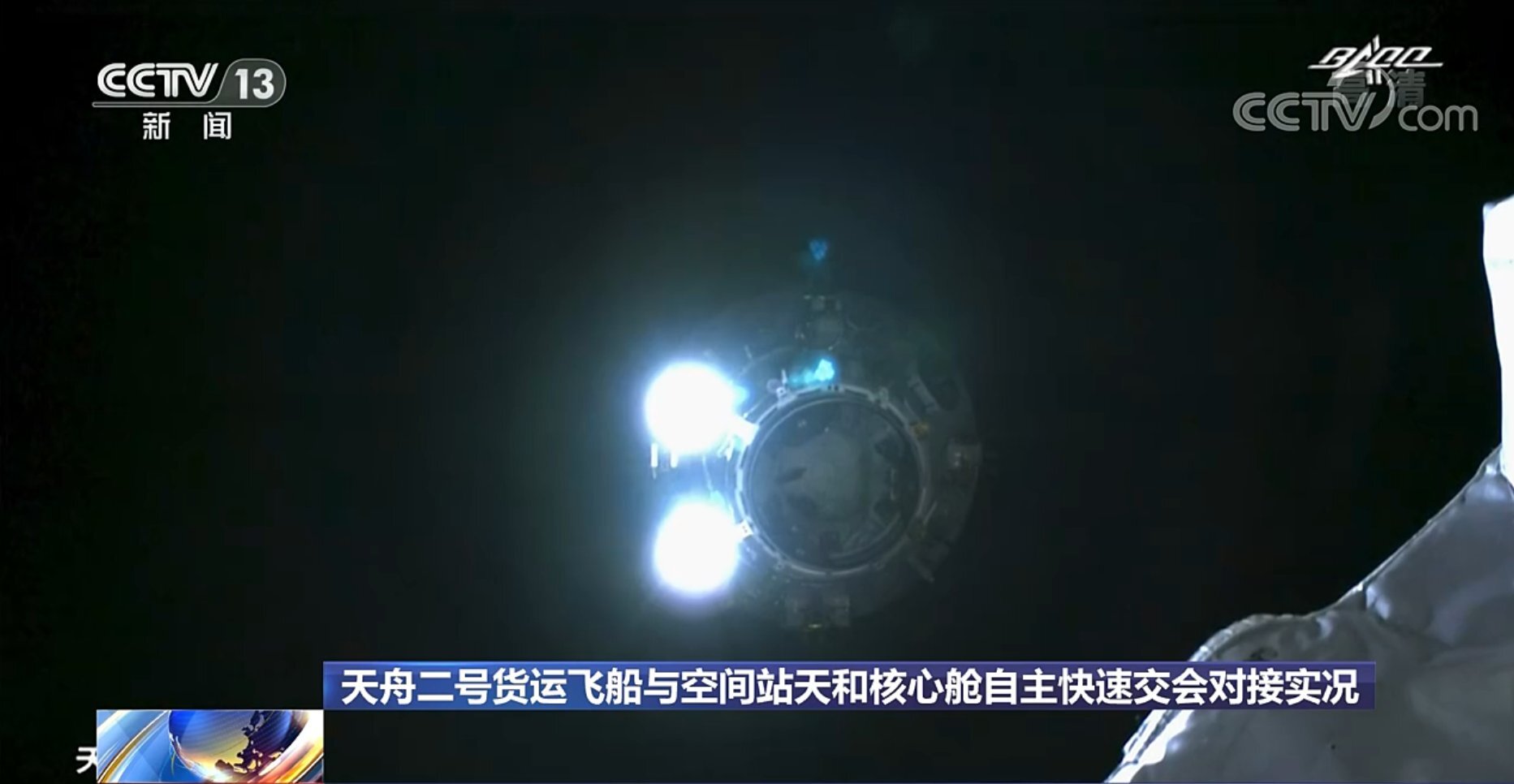 The Tianzhou-2 cargo spacecraft docking to Tianhe – via CCTV

The Shenzhou-12 mission is planned to dock with the Tianhe space station core module as early as six hours after liftoff, though the actual docking time is not yet known. The crew members will enter the station and outfit it for their three-month mission. They will no doubt find the core module, with a living space of 50 cubic meters, roomier than the Shenzhou spacecraft they launched on.

The Tianhe core module, like the Mir core module and ISS Zvezda module, features six docking ports and a robotic crane to move future additional modules to their correct docking ports. The Wentian and Mengtian science modules will have most of the equipment and capability needed for science and spacewalks, but the Tianhe module will have some experiment capability for the Shenzhou-12 and 13 mission crewmembers to use. 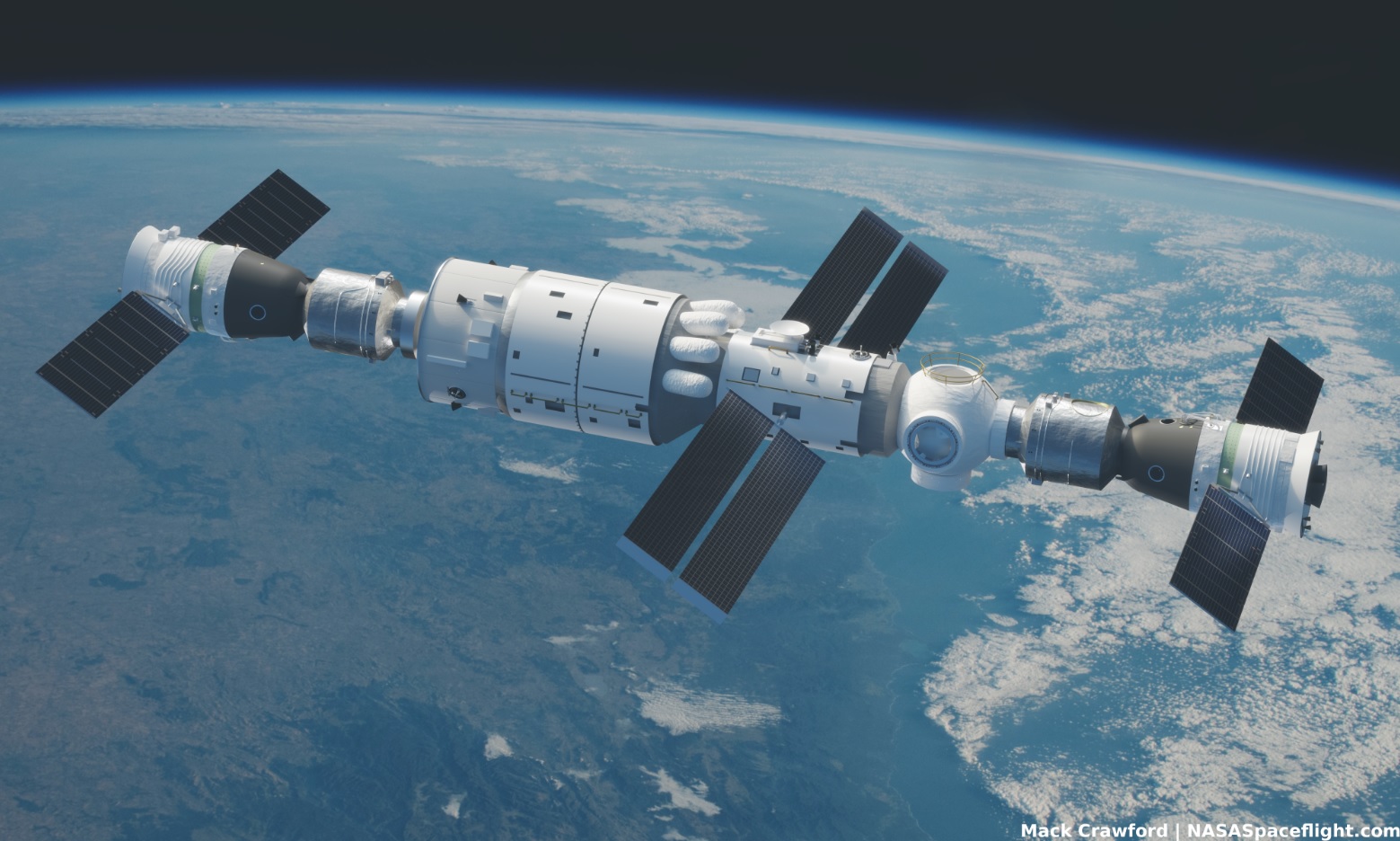 China has also signed an agreement with the United Nations Office for Outer Space Affairs to allow the Chinese station to host international experiments, and some of these experiments have already been chosen. In the future, this cooperation could extend to hosting astronauts from developing countries without their own program, along with ESA and Russian crewmembers.

ESA astronauts Matthias Maurer and Samantha Cristoforetti have trained with the Chinese program and its taikonauts, as part of preparations for a future cooperative spaceflight. As ESA astronaut Maurer stated, “I am very much looking forward to expanding our cooperation with our Chinese friends into space.”

The Chinese Space Station is also planned to host a Hubble Space Telescope-class orbiting astronomical observatory known as Xuntian, scheduled for launch in 2024. This observatory would fly free in its own orbit to conduct observations and would dock with the station periodically for servicing.

The Shenzhou-12 mission is another step in China’s plans to become a increasingly prominent spacefaring power. These plans will expand the number of humans in space and are expected include plans for a crewed landing on the Moon sometime in the next 10-15 years.