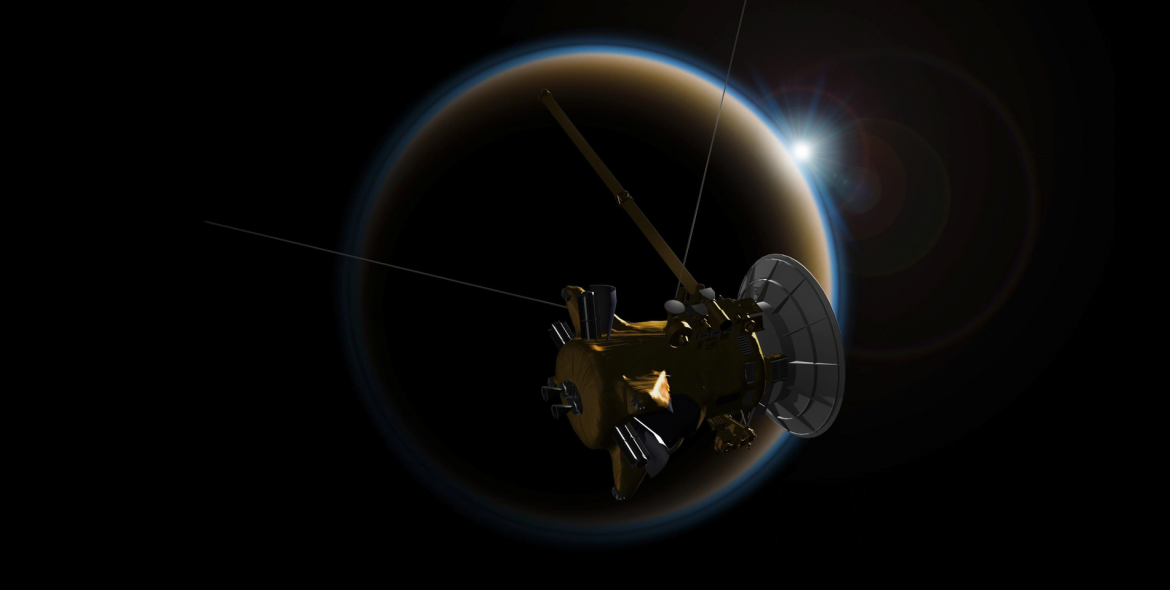 Titan, the atmosphere-shrouded moon of Saturn, has captivated scientists’ attention since its formal discovery on 25 March 1655.  While in-situ observations of the moon ended in September 2017 when the Cassini spacecraft was purposely plunged into Saturn’s atmosphere at the end of its mission, data from the 13 year scientific voyage continues to reveal information not just about Titan’s past but about its future potential to harbor life as well.

While well known for its atmosphere, Titan’s surface is an equal scientific prize due to its complex geology, weather patterns, surface erosion properties, and subterranean ocean.

Missions from Pioneer 11, to the two Voyager probes, to the joint NASA/ESA Cassini-Huygens mission — which saw Huygens successfully enter Titan’s atmosphere and land on its surface — have all studied the moon with intense interest.

Like any other terrestrial world in the solar system, Titan has various impact craters across its surface, though not as many as would be expected given the moon’s size and age.  This lack of visible craters — as seen on Earth — has largely been attributed to erosion events caused by raining methane.

A new examination, using Cassini and Huygens data, of nine Titan impact craters at various locations in the equatorial and mid-latitude regions has provided new information on the evolution of the craters, how they are related to Titan’s weather systems, and a unique look at the subsurface composition of the moon exposed due to the impact.

“Impact craters are one of the few geologic features that expose material from the interior, providing a rare opportunity to understand the subsurface composition of Titan,” said Anezina Solomonidou, lead author on the study published in the journal Astronomy & Astrophysics. 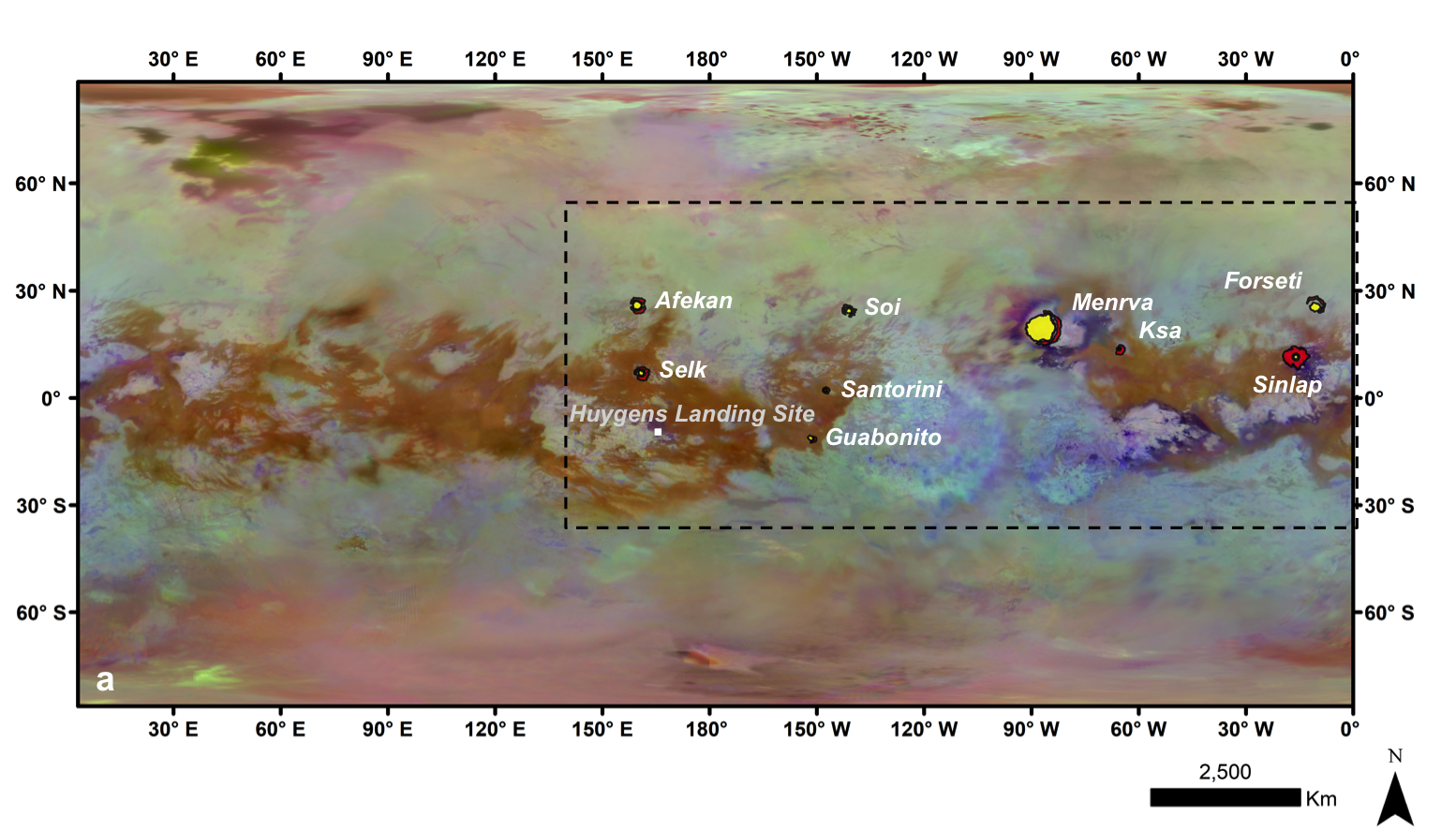 “When we study the astrobiological potential of an ocean-bearing world like Titan, it is vital to look for pathways for organic material, for example mixtures that contain important elements, like carbon.  These can be recognizable at the surface and in the atmosphere after being transported from the subsurface ocean, which is the most likely habitable environment, and vice versa.”

Using data from Cassini’s Visual and Infrared Mapping Spectrometer (VIMS) as well as its RADAR instrument, Solomonidou et al. were able to employ a three-pronged approach.

First, they looked tens of centimeters below the impact crater’s surface using microwave emissivity data from the RADAR instrument to understand if the craters’ sub-surfaces were composed mostly of water-ice or organics.

This was done by measuring the effectiveness of each crater’s ability to emit energy, with lower emissivity indicating water-ice and high emissivity areas indicating organics.

Next, they studied the layer of material that has settled over the impact crater’s surface with VIMS.  However, in order for this instrument to study Titan’s surface, the methane absorption properties and haze of the moon’s atmosphere had to be properly understood.

To get that information, Solomonidou et al. had to dive into the Huygens lander data.  Huygens, built by ESA, entered Titan’s atmosphere on 14 January 2005, landed successfully on its surface 2 hours 31 minutes later, and continued to transmit data back to Cassini for another 90 minutes thereafter.

With that information in hand, as well as that collected by the VIMS instrument, the team was able to study the chemical composition of the crater floors and ejecta — material thrown out from the crater during the impact event.

The results showed two distinct types of craters.  For those located in the equatorial dune fields, the impact events were found to be mainly organic, whereas the mid-latitude plain craters were found to have a mix of organics with water ice.

Overall, six of the nine craters studied were in the dune fields while the remaining three were in the mid-latitude plain regions.

Moreover, the analysis revealed that the dune craters have a difference in composition between the material on their crater floors (subsurface) then that in their ejecta materials (surface), suggesting a difference in surface layer composition that does not affect the subsurface environment.

Conversely, the midlatitude plain craters were found to be mostly uniform in crater floor and ejecta composition.

This difference is likely traced to the local weather patterns at the equatorial and midlatitude regions.  Scientists have long seen evidence that the equatorial zones receive less methane rains than the plain regions.

Evidence collected by Solomonidou et al. suggests that the plain craters are in fact being cleaned of their sediment via fluvial erosion, which would agree with previous theories of increased methane rainfall at the midlatitude regions.

“The most exciting part of a result is that we found evidence of Titan’s dynamic surface hidden in the craters, which has allowed us to infer one of the most complex stories of Titan surface evolution scenario to date.  Our analysis offers more evidence that Titan remains a dynamic world at present.”

As with any scientific study, there are outliers to this particular assessment: the impact craters of Menrva and Sinlap.  Menrva stretches 425 km into both the dune and plain regions of the moon and therefore could not be classified into one category or the other.

Meanwhile, Sinlap, the youngest identified impact on Titan, was found to have indications of water-ice unlike the other dune craters.  It is possible that Sinlap is simply too young at this point to have been covered by organic material like the others in the region.

Intriguingly, too, one of the dune craters, Selk, was found to be completely covered by organics and undisturbed by the methane rain process — making it almost like a preserve.

Selk is a target for NASA’s upcoming Dragonfly mission to Titan.  That mission, set to launch no earlier than 2027, will deploy a 450 kg rotorcraft scientific laboratory to the moon that will seek to identify extraterrestrial habitability and how far along the prebiotic processes on Titan have evolved in different environments.

Unlike the Martian rovers, Dragonfly will be able to fly itself to multiple geologic locations and environments over the course of its planned 2.7 year scientific mission at the Saturnian moon.  The craft will be able to fly at 10 m/s at an altitude of 4 km above the local terrain.