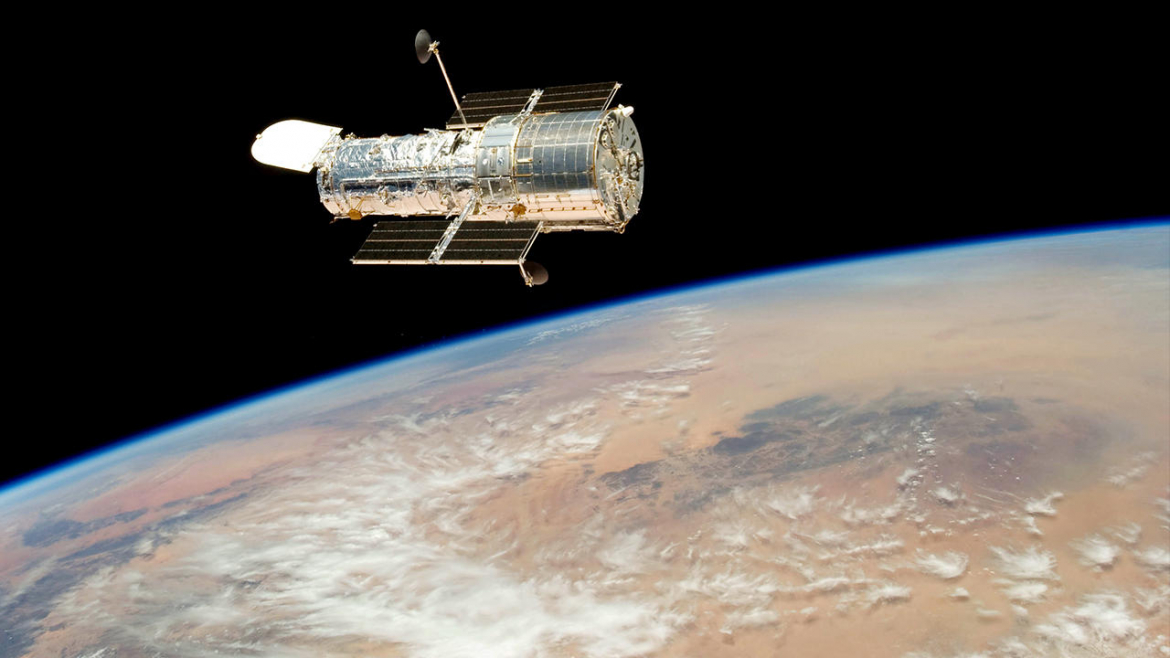 Following an unexpected payload computer halt on June 13, Hubble teams are diligently working to bring the 31-year-old telescope back online. The halt, which has garnered news headlines throughout the past week, is proving to be quite the challenge for engineers to resolve.

Although this failure undoubtedly highlights Hubble’s growing age, scientists have continuously used the observatory for research. One team of researchers’ recently published research using Hubble highlights one of the universe’s most mysterious phenomena — dark matter.

As with most spacecraft, Hubble’s main computer has a “safe mode” feature that will shut down all science instrumentation and only operate essential telescope systems (power, communications, etc.).

NASA continues to investigate and work to resolve the problem with the payload computer on the Hubble Space Telescope. https://t.co/BOrdLRDiMV

Hubble teams in the control center at the Goddard Space Flight Center in Maryland recognized that Hubble was in safe mode and later attempted to restart the telescope the following day.

However, the halt occurred yet again, and Hubble went back into safe mode.

Thankfully though, the payload computer to blame for this issue was built with redundancy. Thus, a second computer is available for use in orbit in the unlikely event a failure occurs.

The team switched to this backup computer on Wednesday, June 16, and attempted to run it for a day to see how it operated with the telescope. However, the command to start up and operate the backup computer was never fully completed. Other attempts to switch to the computer were performed the following day, but they too were all unsuccessful.

Hubble’s payload computer is tasked with coordinating and operating the many science instruments onboard the telescope. Currently, six instruments operate on Hubble. 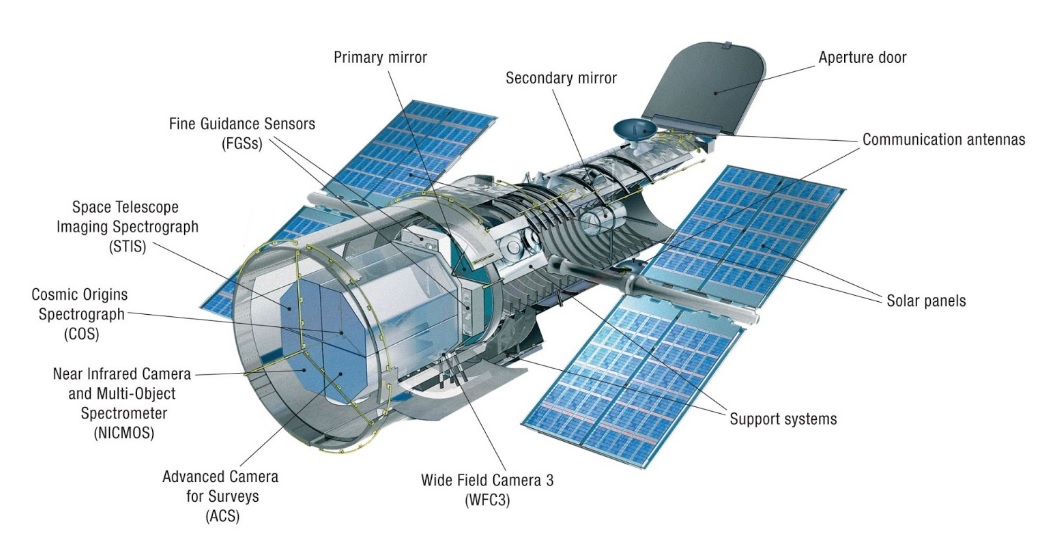 Following initial data analysis from the event, Hubble teams believed one of these memory modules was degrading, which would’ve caused the NSSC-1 system to halt.

However, after running tests and collecting more data on certain telescope systems, Hubble teams now believe that either the Standard Interface (STINT) hardware or the Central Processing Module (CPM) is to blame for the halt, and that the memory failures are a side effect of the overall failure.

If the payload computer issue can’t be fixed, the Hubble team is prepared to switch to the STINT and CPM hardware on the backup computer.

Knowing this, Hubble teams plan to continue running tests on the telescope to gain data and hopefully identify a solution for the issue. 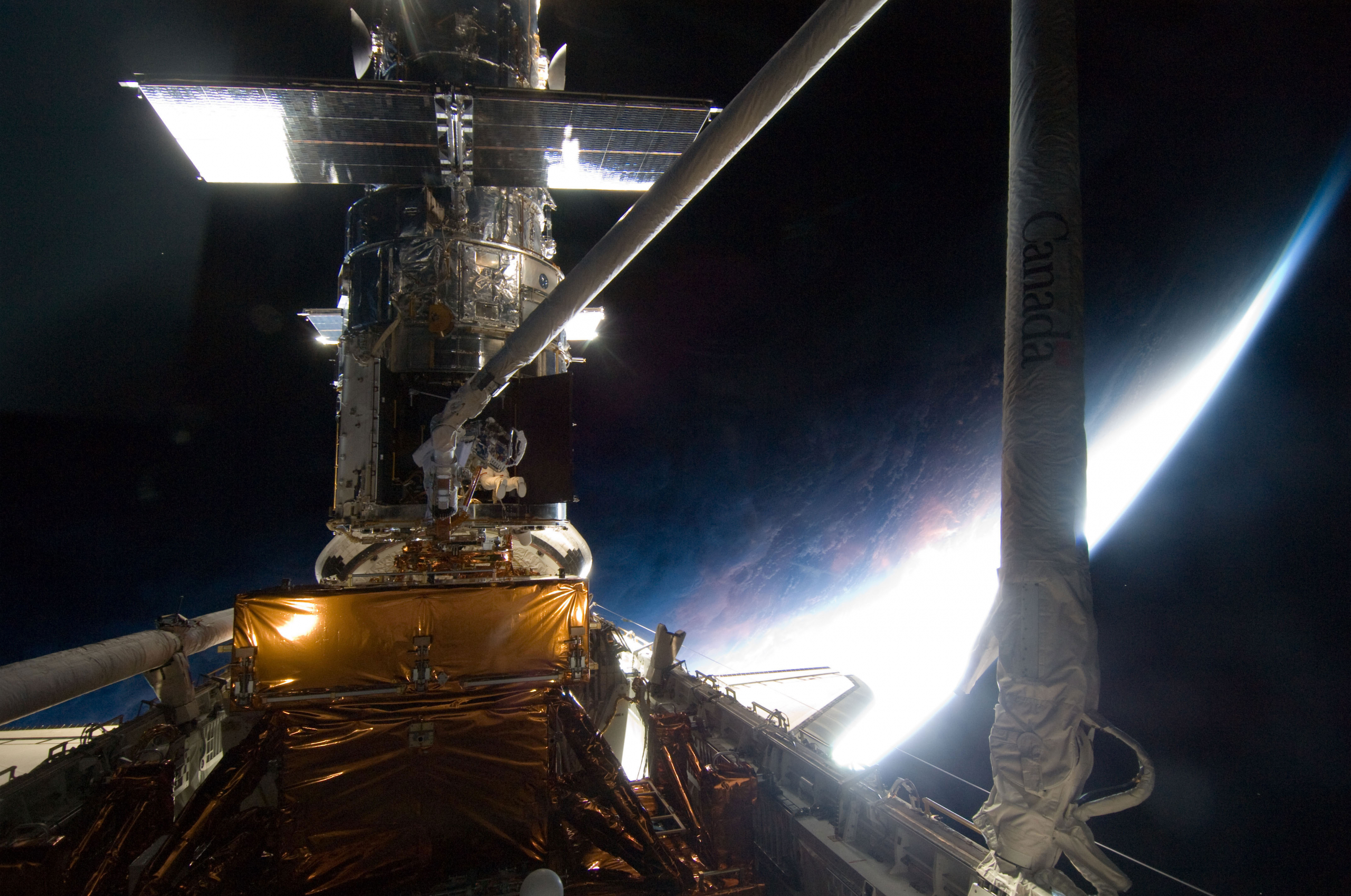 Nonetheless, this failure once again highlights the growing age of the iconic telescope.

Without the ability to service the telescope and update its instruments, Hubble teams have had to work around Hubble’s various failures throughout the past 12 years. One of Hubble’s most recent failures occurred in March of this year.

The amount of time Hubble has left is unknown, but failures like these show that we are slowly creeping closer to Hubble’s final days in orbit.

Thankfully though, Hubble’s replacement, the James Webb Space Telescope, is currently set to launch in the fall of this year, pending the resolution of fairing issues on the Ariane 5 rocket.

In the meantime, Hubble teams continue to work to bring the telescope out of safe mode and back into science operations, with updates being released every few days. 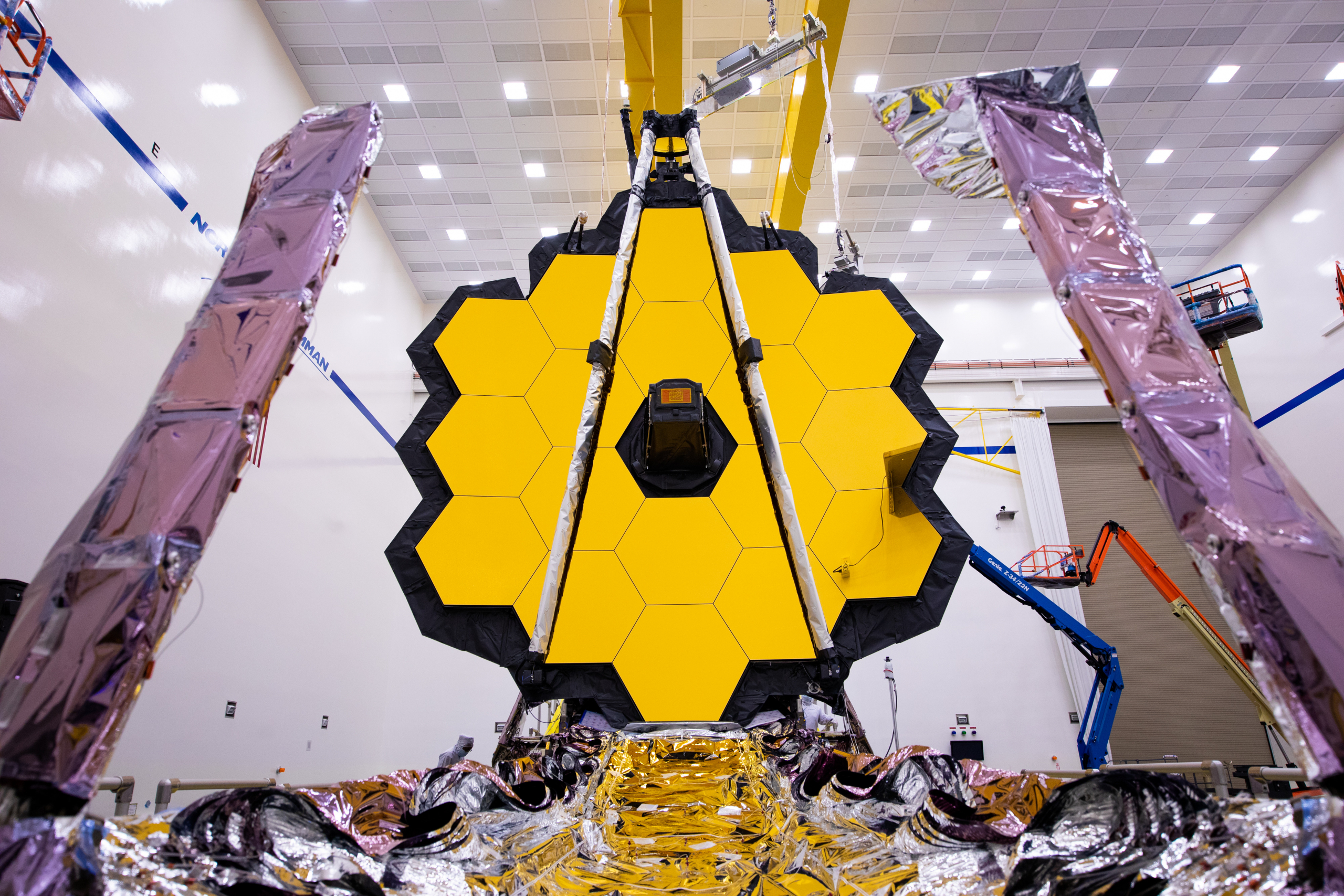 The James Webb Space Telescope, successor to Hubble, is being prepared to launch later this year – via NASA

72 million light-years away from our solar system, in the constellation Cetus, an ultra diffused galaxy named NGC 1052-DF2 (simply DF2) drifts through space.

It has been the site of great mystery due to its lack of dark matter — a finding that challenges conventional theories.

Current theories suggest that dark matter makes up a considerable amount of a galaxy’s mass. Dark matter in galaxies can be thought of as the scaffolding for their structures. Large amounts of dark matter dominate nearly all galaxies.

Additionally, dark matter is thought to account for nearly 85% of the entire universe’s mass, and galaxies are even thought to form from large halos of dark matter throughout the universe.

So, you can imagine that when a team of researchers announced in 2018 that they found DF2 to have little to no dark matter inside it, some were quick to become skeptical of the legitimacy of the findings.

“We went out on a limb with our initial Hubble observations of this galaxy in 2018. I think people were right to question it because it’s such an unusual result,” said Pieter van Dokkum of Yale University, who led the 2018 research. 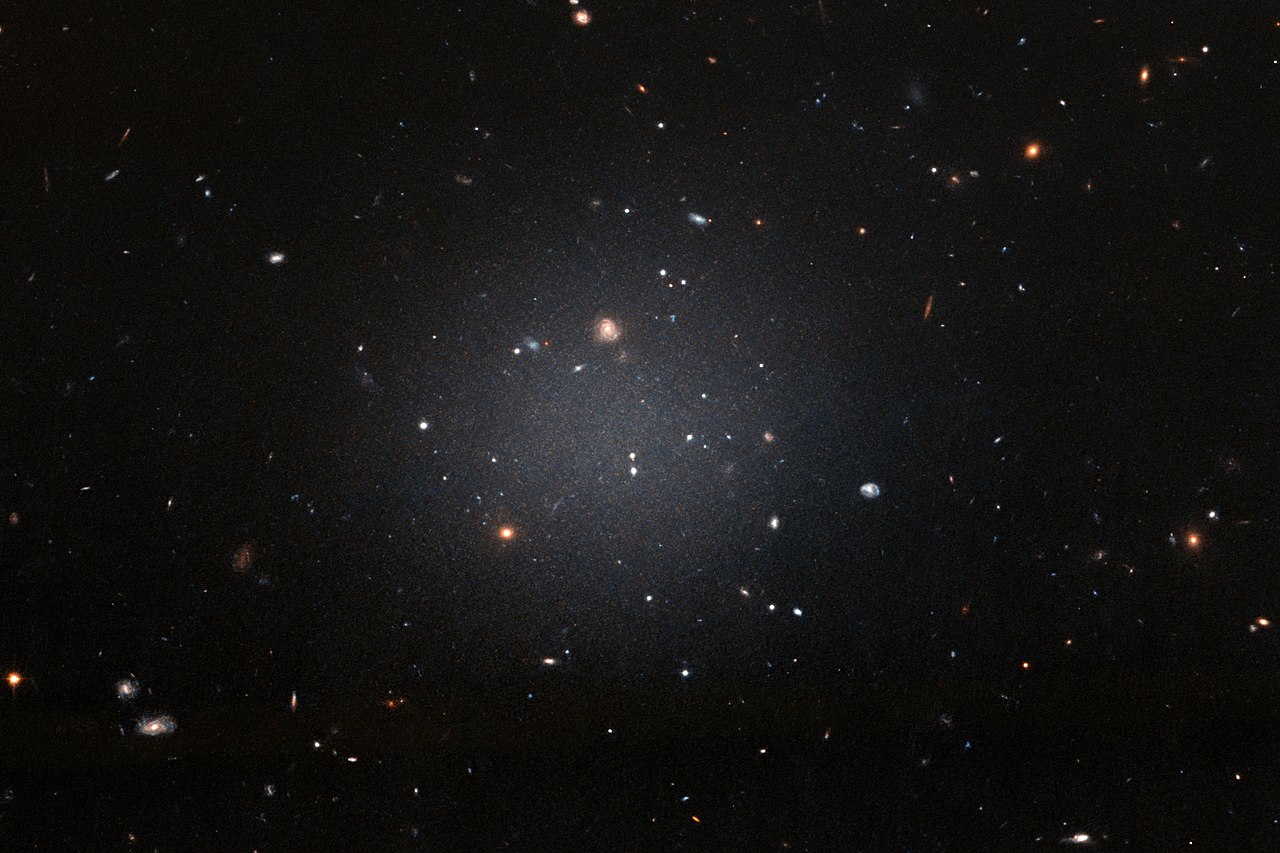 Van Dokkum et al.’s 2018 findings were so shocking that they decided to perform a follow-up study on DF2 using Hubble. The 2021 results were recently published in The Astrophysical Journal Letters.

To understand just how much dark matter is in DF2, we have to first measure how far away DF2 is from our solar system.

To calculate how far away DF2 is, van Dokkum et al. had to observe the various movements of stars within DF2 due to star movements influenced by the galaxy’s gravitational pull.

The team of researchers made estimates using information gathered throughout previous studies and observations. If DF2 were as distant as van Dokkum et al. suggested, the amount of total dark matter in the galaxy would be only a few percent.

If DF2 were closer to Earth than van Dokkum et al.’s suggestions, the galaxy would need dark matter to compensate for the observed effects of the total mass because DH2 would be much smaller and less faint than it is.

Van Dokkum et al. found that the total amount of stars accounts for the entire mass of the galaxy. Understanding this, the team found that with the number of stars in DF2, there isn’t much room for dark matter to be present in the galaxy.

This suggests that there likely are very small amounts of dark matter present inside DF2.

To measure DF2’s distance, Hubble’s Advanced Camera for Surveys instrument was used in observations. In the observations, the team observed aging red stars on the outskirts of DF2 to pinpoint the galaxy’s distance.

But — why red stars?

Red stars all reach the same peak brightness throughout their evolution, and using the intrinsic brightness of a star, astronomers can calculate intergalactic distances.

Although the recently published results from van Dokkum et al. don’t explain exactly why DF2 is deficient in dark matter, knowing the galaxy’s distance and having accurate observation data bolsters the team’s initial results from 2018.

However, DF2 is not the only galaxy in the universe lacking dark matter that we know of.

Research published in 2020 led by Shany Danieli of the Institute for Advanced Study in Princeton, New Jersey, studied another galaxy similar in composition to DF2 — galaxy NGC 1052-DF4 (simply DF4).

Both DF2 and DF4 are “ghostly galaxies” and “see-through galaxies” because of their massive size and faintness. DF2 is nearly as wide as the Milky Way.

Dark matter is the “invisible glue” that holds the universe together.

All galaxies seem to be dominated by it, but Hubble observations of a galaxy lacking dark matter challenge theories of galaxy formation. For more on this cosmic mystery: https://t.co/njbF13cC2r pic.twitter.com/VVUkxLxJh8

According to Danieli et al.’s 2020 study, DF4 lacks dark matter like DF2. However, the way it lost its dark matter is likely a much different process.

The research suggests a neighboring galaxy’s gravitational forces pulled the dark matter out of DF4, stripping the galaxy of all its dark matter.

Theories suggest that DF2 and DF4 were once members of the same galaxy cluster. But, new Hubble observations show that the two galaxies are farther than astronomers thought and that DF2 has drifted away from the previous cluster.

Furthermore, 19 dwarf galaxies deficient in dark matter were discovered in another 2020 study. So although we know of multiple galaxies lacking in dark matter, scientists say we will need to discover many more dark-matter deficient galaxies to truly uncover the mystery behind these mysterious galaxies.

“In our 2018 paper, we suggested that if you have a galaxy without dark matter, and other similar galaxies seem to have it, that means that dark matter is actually real and it exists,” van Dokkum said.