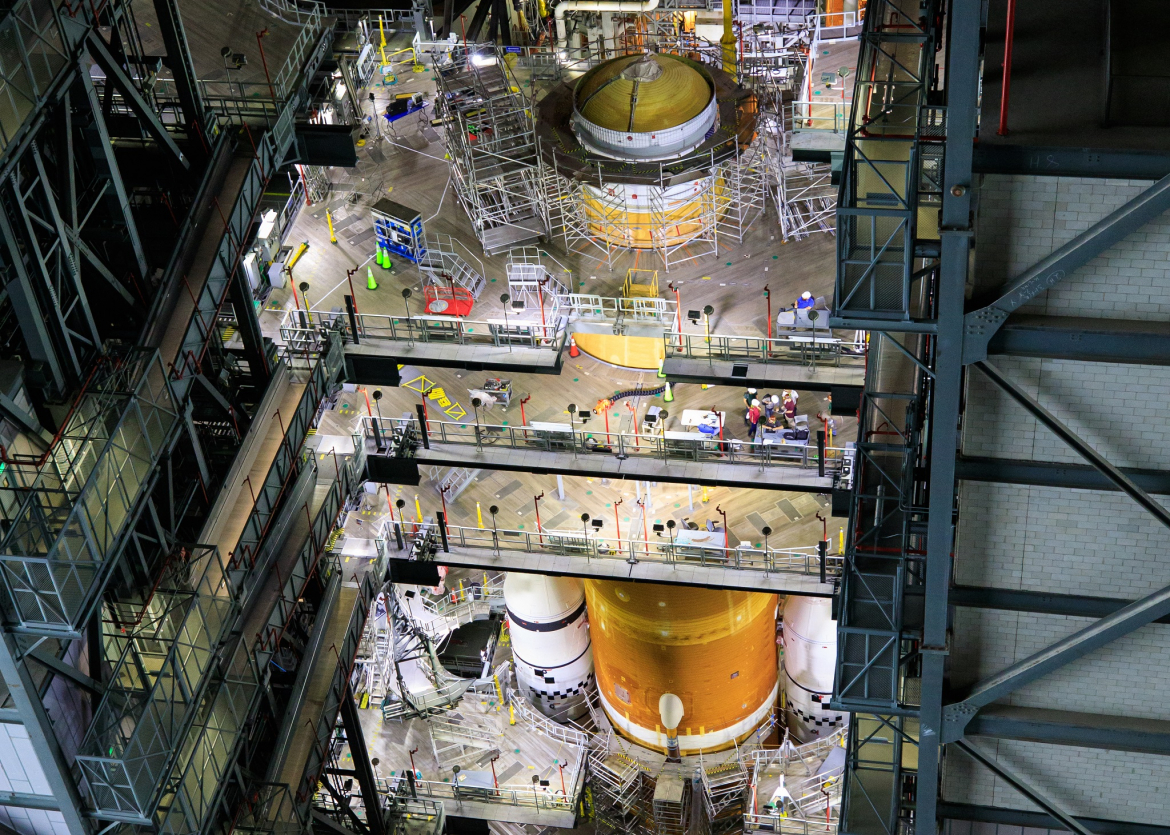 The launch campaign for NASA’s Artemis 1 test flight will be punctuated by critical and unique tests to support both pre-launch checkouts of this first-flight vehicle and long-term design objectives. Launch preparations are progressing towards the first power-up of the Artemis 1 Space Launch System (SLS) rocket, which will allow the Exploration Ground Systems (EGS) launch team to begin digital diagnostics.

The Integrated Test and Checkout (ITCO) of the flight and ground systems will include special engineering tests for the Orion and SLS Programs. Up to this point, mathematical models were used to analyze and predict how the different systems would work when assembled on the launch platform; over the next few months, some of the tests will help calibrate those analytical models while others verify that the vehicle is ready to launch for the first time.

There is more to launch preparations than stacking the pieces and bolting them together. The Artemis 1 flight vehicle is a group of interconnected machines that each controls different phases of the launch and mission.

The Artemis 1 vehicle includes three independent flight control systems. The NASA SLS flight system being flown for the first time will be in control from liftoff to cutoff/suborbital insertion by the Core Stage. At that point, control is handed off to the United Launch Alliance flight system on the Interim Cryogenic Propulsion System (ICPS) for flight through the trans-lunar injection burn (TLI). After TLI, Orion separates from the ICPS on its way to the Moon and the Orion spacecraft’s flight control system then performs the Artemis 1 mission, navigating in and out of lunar orbit and back to Earth.

All three flight systems need to be aware of each other, and up until shortly before ignition they are responding to directions from the ground launch command and control system. Before the crawler-transporter takes the Mobile Launcher with the vehicle stacked on it out to the launch pad, all those interconnections and their thousands of constituent signals need to be validated during integrated checkouts while parked in the Vehicle Assembly Building (VAB).

In addition to the standard pre-launch checkouts that every Orion/SLS vehicle will go through in the VAB, a number of engineering tests will be carried out during the Artemis 1 campaign as part of the overall development of the spacecraft, launch vehicle, and ground support systems. 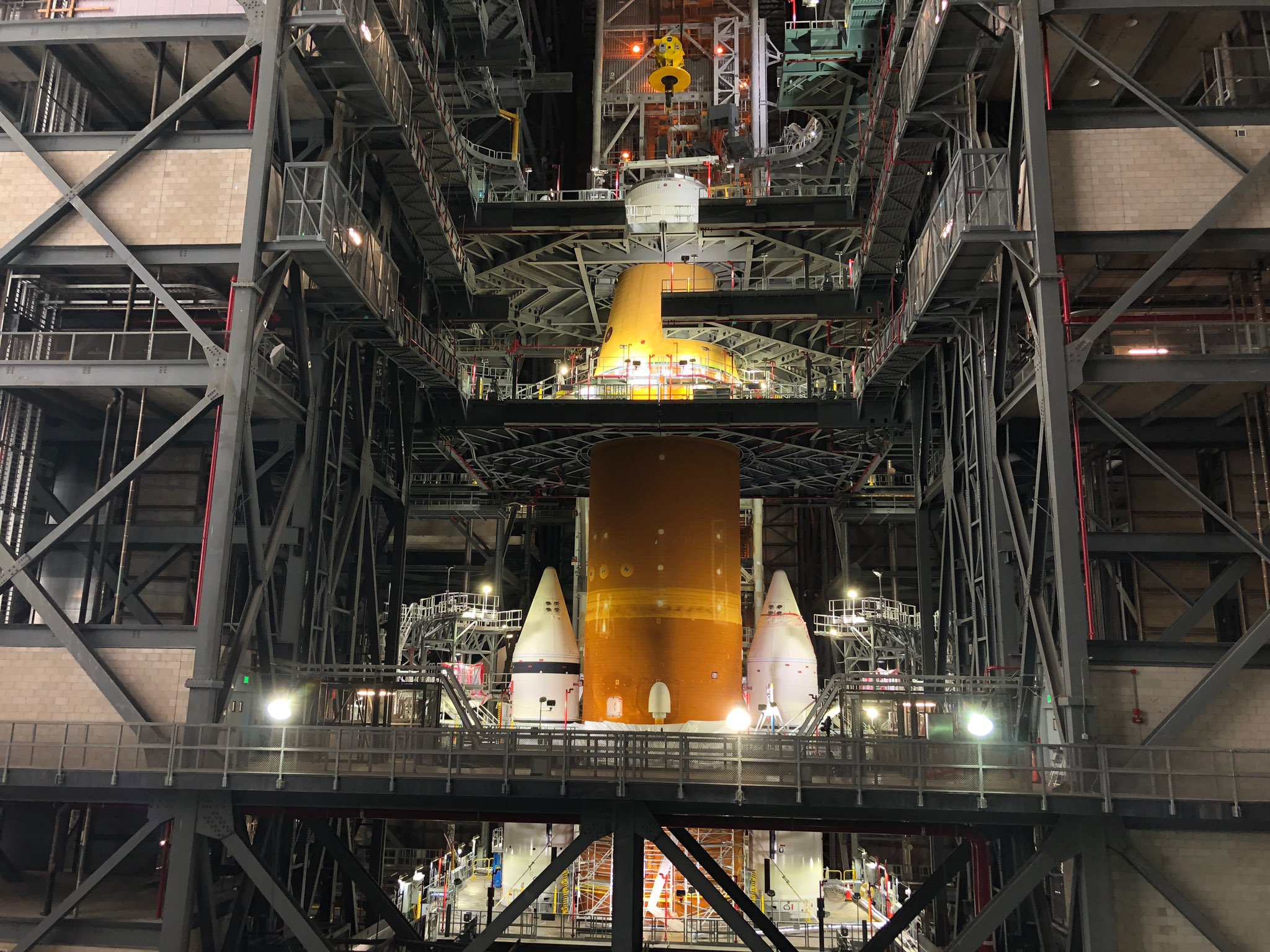 (Photo Caption: The ICPS in-space stage for Artemis 1 is suspended on one of the VAB cranes in position while being mated to the partially-assembled SLS stack on July 6. Along with preparatory checkouts, the SLS vehicle will be put through a series of engineering tests prior to the Artemis 1 launch.)

“[Testing is] a good truth model for us,” Dr. John Blevins, NASA’s Chief Engineer for the SLS Program, said in a July 12 interview. “As we stacked and put the boosters together, and before we put the Core Stage on, we did this test that we call the booster pull test. We put [a] load on the booster, and we really measured the stiffness, if you will, the compliance of the joint on the bottom of the booster where it is on the vehicle posts. So ITCO has already started.”

One of the more prominent tests on the Artemis 1 launch processing schedule is the Integrated Modal Test, which is the latest in a series of modal tests that have been performed on different parts of the flight and ground structures. During the Green Run design verification campaign of the Core Stage at the Stennis Space Center, a modal test was performed on the standalone stage while it was suspended on a crane at the test stand.

“We did do a ping test when it was on the crane, and then we also did three shakers at Stennis Space Center to get those modes if you will, the displacements through the structure as we excite the structure,” Blevins said. “We basically suspended the vehicle with shakers on it, and we did that modal test and were able to get the information that really went to finalize the finite element model.”

As with the test on the Core Stage by itself at Stennis, the integrated SLS vehicle with a mass and center of gravity Orion simulator on top is still connected to the Mobile Launcher. The shakers that vibrate the structure are not just vibrating the vehicle structures, but also the ground support equipment they are attached to.

Additional testing and data was performed and gathered on the ground equipment at Stennis and KSC by themselves.

Lunar IceCube, a secondary payload on @NASAArtemis I, has been integrated with @NASA_SLS! The CubeSat — developed by @moreheadstate, Busek Co., @NASAGoddard, @NASAJPL, and @NASAIVV — will search for water and other resources on the Moon!

Blevins noted that there are other tests that will measure the coupled structural dynamics between the vehicle, Mobile Launcher, and crawler-transporter. A dynamic rollout test is planned when the Artemis 1 vehicle rolls out to the launch pad for its last planned series of tests — and then on its way back from the pad to the VAB for final launch closeouts.

There is the possibility of a braking test during rollout. “We do have a test of opportunity as we roll out the vehicle where we just brake as we’re rolling out at all of 0.8 miles an hour speed,” Blevins said. “[We would] make a hard braking, and you’ll see the response of the vehicle. And that’s another integrated type of test.”

“We’re going to monitor the dynamic response of the vehicle as we have it on [the crawler]. There’s not just that braking test or that dynamic rollout test, but also that full [rollout] event. And that’s really part of ITCO as well because that feeds back the fatigue spectra that we would expect on different rollouts and rollbacks.”

Before the fully connected vehicle rolls out on the Mobile Launcher to the pad, a series of Program Specific Engineering Tests (PSET) will be carried out inside the VAB.

“Some of the tests are software tests,” Blevins related. “Some of them we would call sensor-to-effector testing.” One of those software tests is an “end-to-end polarity test” that demonstrates that gimbaling commands to the SLS Solid Rocket Booster (SRB) nozzles and Core Stage engines from the flight software guidance system are properly translated from vehicle motion sensors.

“We actually point to a place in orbit and then we monitor the change in the nozzles. And we make this a really complex location so I can see [gimbaling] in all axes, but we’ll monitor the vehicle just changing from where it’s sitting on the Earth to how that point in space changes during the day,” Blevins explained. “We’ll set up video and we’ll take really low speed video to see the integrated motion of the nozzles. And that’s really like a flight controls test, although certainly it works through the software.”

“We also have some acoustic tests coming up here shortly where we make some noise and we measure [the] attenuation. It’s one of the few tests that aren’t what I would call critical to making sure we’re successful on Artemis 1 or 2, but it is a way we can learn about the attenuation of noise through that structure and inform us how we can decrease mass or really inform some of our payloads as we go forward.”

“If we have [payloads] that are going to be in different volumes, they will be able to have a better, more accurate measure of the acoustics that would be placed on them,” he added.

Blevins also elaborated on some other SLS functional and environmental testing that will be performed during launch campaign testing. “There’s RINU (Redundant Inertial Navigation Unit) initialization,” he said. “We spin up the CAPUs (Core Auxiliary Power Unit) in their environment. We did that obviously with Green Run, and they were quite important [for that].”

“There’s a comm (communications) test that’s through-and-through the system. So we send signals. Some of those pass certain information through the SLS systems between the Core Stage to Orion, and so that’s got to go through those parts. There’s ordnance tests with our Flight Termination System that are required.”

“There’s also a time correlation test that we’re going to do where we ping and we make sure the timing throughout the system/rocket doesn’t have any excessive latency,” Blevins continued. “You’ve got multiple flight instrumentation boxes that are hooked up to different data acquisition systems, so we can really calibrate any of that lag out if we find any in this time correlation test. But that’s a particularly good one.”

“Just to mention a few others, one is an RF test, a radio frequency test, where we’re just making sure that the local cell towers don’t block our telemetry systems and things like that. Not all of these are standard; this is a little bit more than a normal rocket because it’s a first launch of a rocket. We won’t do a modal test again [after Artemis 1]; we won’t instrument some of the things as much, but all of those are really important tests,” Blevins added.

The Orion program will also be running specific engineering tests on their spacecraft during ITCO. 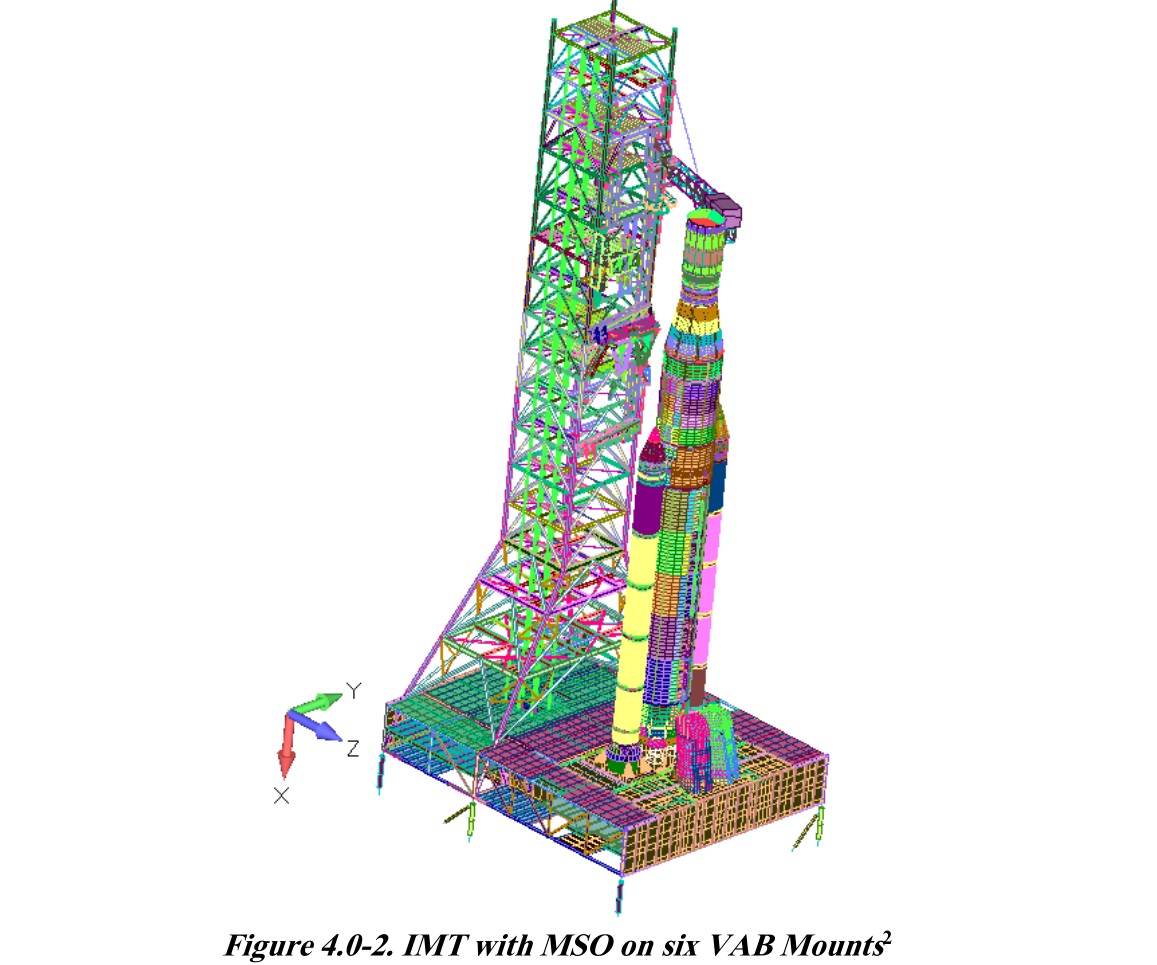 (Photo Caption: A finite element style rendering of the vehicle configuration that will be used for the Integrated Modal Test (IMT) to be conducted on the SLS and Orion simulator while they are sitting on the Mobile Launcher. A structural test article of the Orion Stage Adapter and a Mass Simulator for Orion will substitute for the flight spacecraft elements during ping and shaker testing.)

The integrated operations team of EGS and prime launch processing contractor Jacobs is working to prepare the SLS part of the Artemis 1 stack for power up by their Spaceport Command and Control System (SCCS) to begin some of the bigger testing and checkouts in the VAB.

The first powered ITCO test is called the Interface Verification Test (IVT). The connections between all of the SLS flight hardware and the Mobile Launcher will be checked out in the IVT, which is currently projected for mid-August.

“We’ll verify health and status of the vehicle, that everything is functioning correctly, as intended per the build,” Danny Zeno, Senior NASA Test Director for EGS, said in a recent interview. “We want to make sure electrical interfaces are correctly mated. We’ll go through a series of vehicle leak checks to make sure all of those are good from a ground perspective. And that data is essentially looking good as a readiness check to make sure all the systems are looking good and performing nominally.”

After the IVT is completed, internal access platforms will be removed from the equipment sections of the Core Stage and other SLS elements will be closed out as if for launch in preparation for the next two tests. The first of those, the Umbilical Release and Retract Test (URRT), will verify the Mobile Launcher’s swing-arm release system, which must safely detach the ground umbilical connections from the vehicle at T0 and quickly swing, or drop as the case may be, the various arms away.

That will be followed by the Integrated Modal Test, where the shakers described by Blevins will excite the vehicle as it is attached to the Mobile Launcher through just the eight Vehicle Support Posts on the SRB aft skirts.