The SpaceX Crew Dragon Endeavour vehicle has swapped docking ports aboard the International Space Station in preparation for the upcoming Starliner OFT-2 mission. The 45-minute maneuver began at 10:45 UTC with undocking from the forward port of the Harmony module.

After undocking, Endeavour backed away from the ISS to a distance of 220 meters before maneuvering towards the Zenith port for re-docking. Endeavour docked back to the ISS at 11:35 UTC.

Aboard Dragon for the maneuver will be SpaceX Crew-2 astronauts Shane Kimbrough and Megan McArthur of NASA, Thomas Pesquet of the ESA, and Aki Hoshide of JAXA. All crew must be aboard Dragon so that they are able to return to Earth in the event of a failed redocking, rather than being stranded on the ISS without a ride home.

The crew was also wearing their SpaceX pressure suits in order to protect them from the unlikely event of a depressurization event, should there have been an off-nominal approach that results in a contact between Dragon and the ISS.

The relocation itself began at 10:45 UTC when Endeavour undocked from the Pressurized Mating Adapter-2 (PMA-2) / International Docking Adapter-2 (IDA-2) port on the Forward side of the Harmony module, the port to which it has been docked since it’s arrival at the ISS on 24 April.

Docking confirmed. Dragon Endeavour has returned to the ISS, this time at IDA-3. The previous port is now free for Starliner to use on its upcoming uncrewed test flight. pic.twitter.com/oqhSVIcWq8

Endeavour then backed away from the ISS to a distance of 220 meters, at which time it was commanded to perform an automated 90-degree “flyaround” maneuver in order to align with the PMA-3/IDA-3 port on the Zenith, or space-facing, side of Harmony.

Endeavour then initiated an approach to re-dock with the ISS at 11:35 UTC. After a successful docking, hatches will be re-opened after the standard vestibule pressurization and leak checking procedures have been performed.

This is not the first time Crew Dragon has performed a port relocation – Resilience also performed the same maneuver on April 5 to clear the PMA-2 port for the arrival of Endeavour. Relocations of US crew vehicles is becoming commonplace on ISS as Crew Dragon, Cargo Dragon, and Starliner spacecraft share the only two available docking ports to American docking vehicles.

Today’s relocation was performed in order to clear the PMA-2 port for the arrival of Boeing’s Starliner vehicle on the uncrewed OFT-2 mission, set to launch on July 30 for a docking to the ISS on July 31. 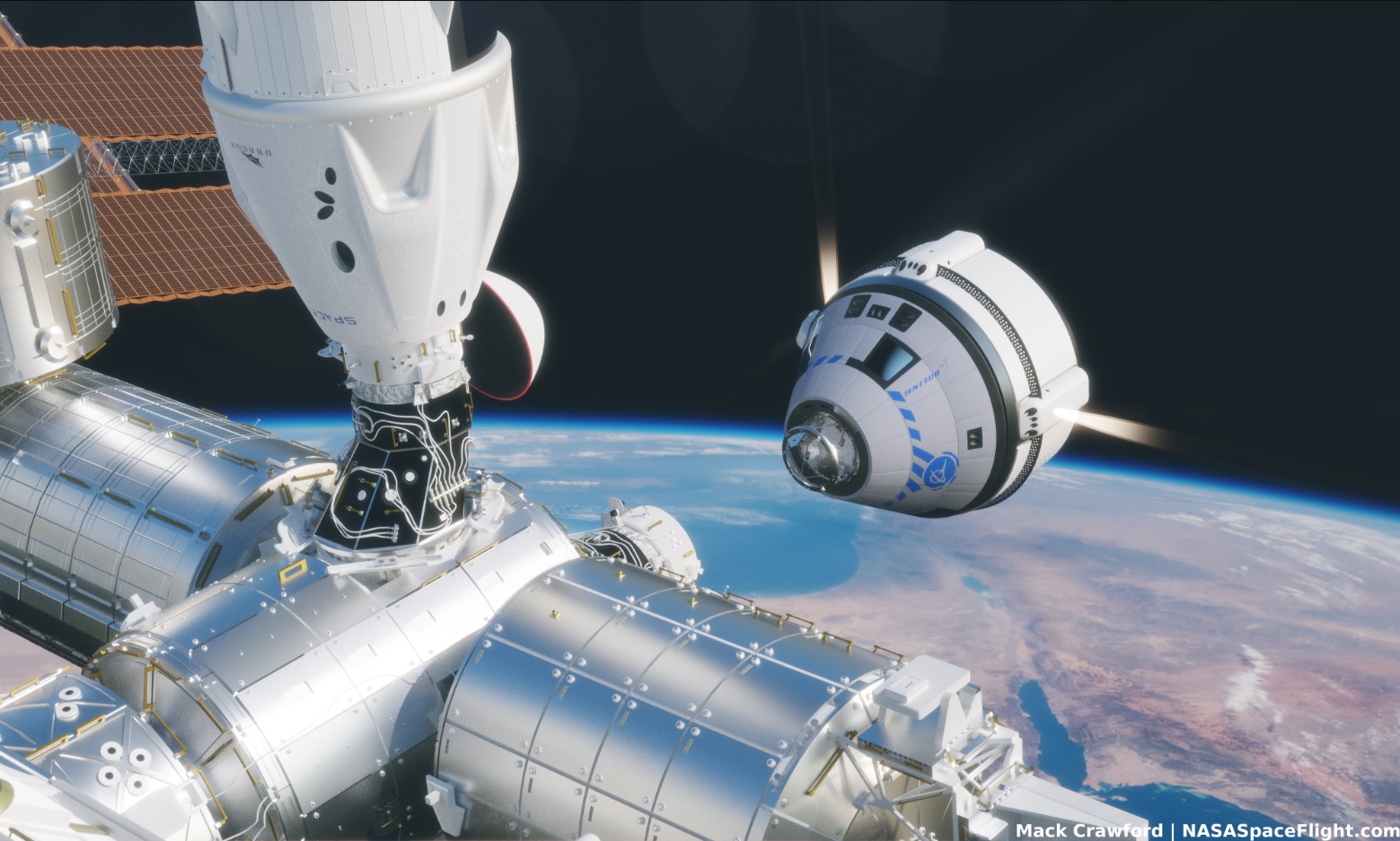 One issue with vehicles docking to the PMA-3/IDA-3 port on the Zenith side of Harmony is that the station’s Ku-band Space to Ground Antenna (SGANT), located on top of the Z1 Truss, can get blocked by approaching vehicles.

Since the SGANT must point toward space in order to communicate with the Tracking and Data Relay Satellites (TDRS) located in geosynchronous orbit, any vehicles approaching the ISS from above may come between the SGANT and the TDRS, depending on the position of the TDRS and the timing of the docking.

This presents signal reflectivity issues, whereby the high-power Ku-band energy may be bounced back into the SGANT, damaging it’s sensitive autotrack sensors.

Therefore, the SGANT must be pointed away from the approaching vehicles, a procedure known as “masking,” whereby the SGANT is prevented from pointing anywhere toward the vehicles’ approach corridor.

This means that live downlink of approach and docking video to the ground is not always possible, as this can only come via Ku-band signal from the SGANT.

The crew aboard the ISS can still receive live video from the approaching vehicle’s cameras, as that is relayed via the Common Communications for Visiting Vehicles (C2V2) link using the S-band antennas. 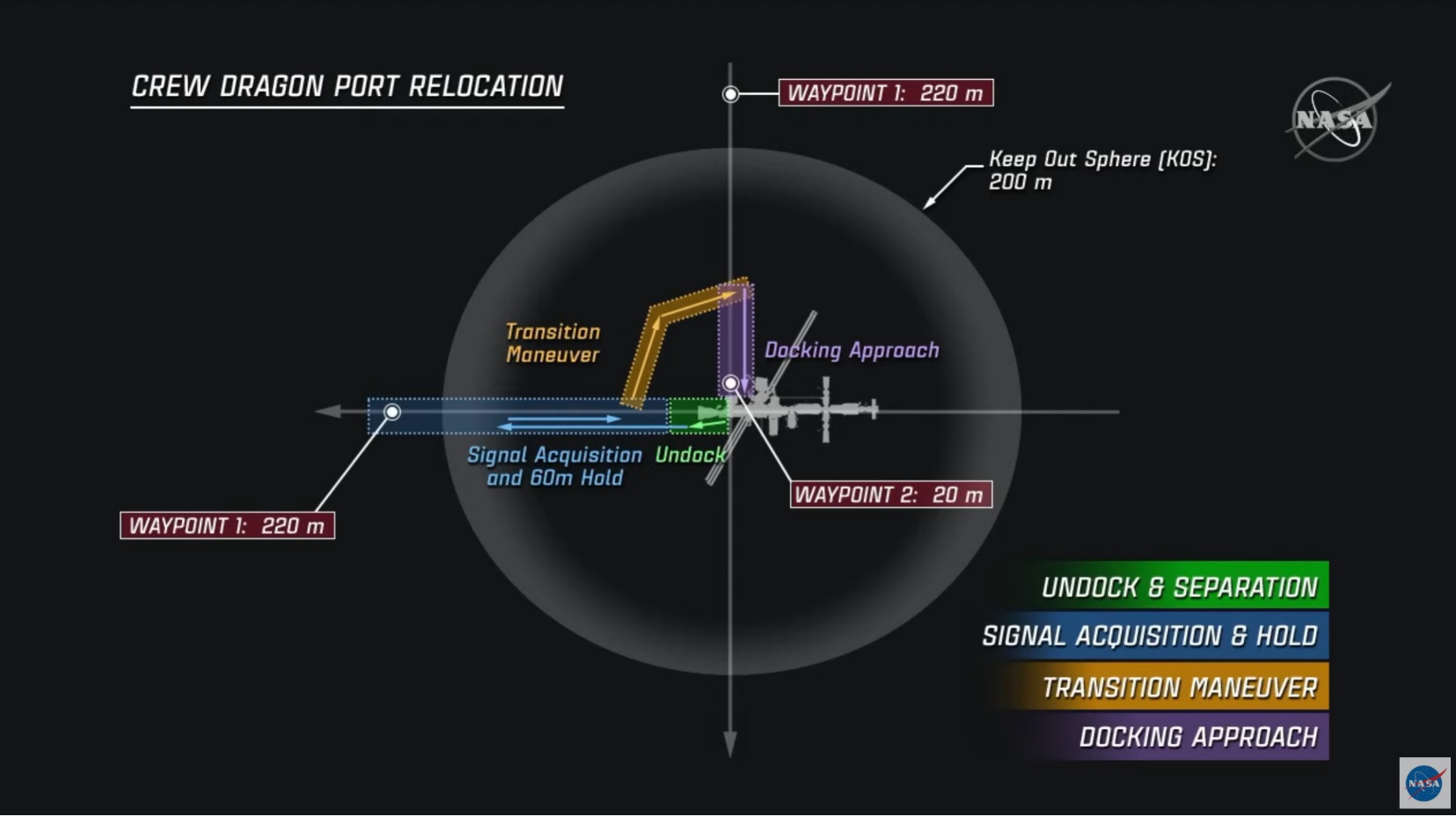 However, controllers on the ground are unable to see live footage from the docking cameras due to the lack of a Ku link, and for this reason PMA-2 can be the preferred port for some dockings – especially test flights – as, being located on the Forward side of Harmony, there are no SGANT masking issues with vehicles using this port.

This is why the first, uncrewed docking of Starliner to the ISS will use the PMA-2 port, just like SpaceX’s Crew Dragon vehicle did on the uncrewed Demo-1 mission.

PMA-2 is also the preferred port for OFT-2 as Starliner’s flight software has been certified for a PMA-2 docking – although the operational version of the vehicle will have the ability to dock to any port. Additionally, PMA-2 offers better lighting conditions, and doesn’t have issues with sensor obstruction due to approaching vehicles not being pointed toward Earth as they are for PMA-3 dockings.

After the departure of Starliner, there could possibly be a relocation of Endeavour from PMA-3 back to it’s original port of PMA-2 again. This would be to clear PMA-3 for the arrival of the CRS-23 Cargo Dragon in late August, should any unpressurized cargo be launched in Dragon’s trunk that would need to be accessed by the station’s robotic arm.

PMA-3 is the preferred port for Cargo Dragons when there is a need for robotic arm access to Dragon’s trunk. In order to access trunk cargo with Dragons docked to PMA-2, the station’s arm would have to stretch far forwards and double back on itself, something it does not have the reach to do.

After the departure of CRS-23 Cargo Dragon, the next crew rotation will arrive on a Crew Dragon on the SpaceX Crew-3 mission, launching from the Kennedy Space Center in Florida no earlier than 31 October.