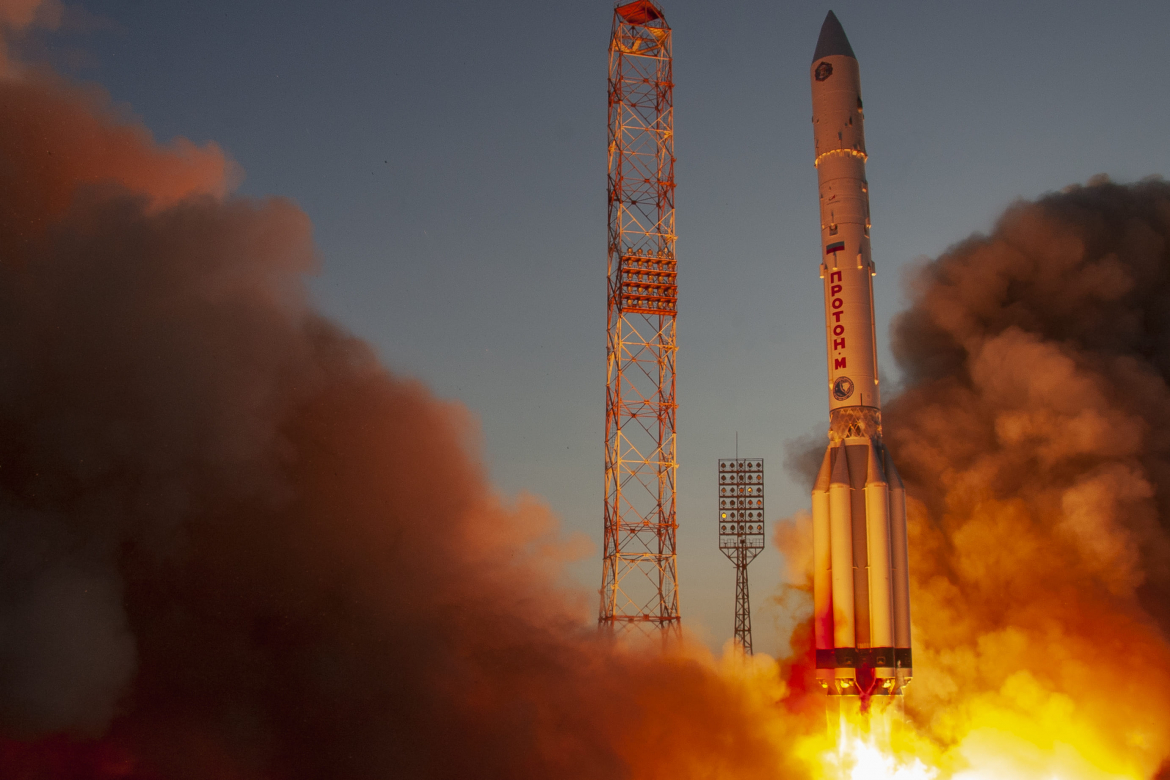 Good things come to those (modules) that wait.  On July 21, at 14:58:25 UTC (10:58:25 EDT), a Proton-M rocket launched from the Baikonur Cosmodrome to take the first Russian ISS module in 11 years to orbit.  The moment marked a major milestone for Roscosmos, which was originally slated to launch the module in 2007.

After launch and orbit insertion, the module, MLM-U Nauka, is now performing an eight day phase to the Station for an automated docking on July 29 to the nadir docking port of the Zvezda service module, a port currently occupied by the Pirs module.

Upon arrival, Nauka will become the third largest module of the Russian segment of the ISS and will add 70 cubic meters of space to the Station’s internal volume, a third Russian-side sleeping location, an additional toilet, as well as new water regeneration and oxygen production systems — augmenting some of the original systems in Zvezda that are showing their 22 year age.

The main task for the Nauka module will be to conduct scientific experiments.  The pressurized compartment of the module contains 21 universal working places (URM), including four locations with sliding shelves, a glove box, a frame with an automatic rotating vibration-proof platform, and a porthole with a diameter of 426 mm for visual and instrumental observations.

Equipment to allow easier replacement of old experiments with new ones is also incorporated into Nauka’s internal design and is based on lessons learned from the early years of the ISS program.

An additional 16 URMs are located on the outer surfaces of the module, which also has an airlock chamber and a European manipulator robotic arm, which will allow operations with experiments in the vacuum of space without performing EVAs.

Today is the day of the most important Russian launch of this year – the #ProtonM rocket will take off from the Pad 200 of Baikonur cosmodrome at 14:58 UTC, carrying the MLM #Nauka module under its fairing. pic.twitter.com/RqWewKb6Tj

The full name of the new module, MLM-U “Nauka” (which means “science”), stands for “Multifunctional laboratory module Nauka, improved.”  However, it is also somewhat lovingly referred to as the “long-suffering module” due to its numerous uses and launch date changes.

Initially, Nauka was built as a backup for FGB Zarya, the first module of the ISS.  Construction started in 1995, with a design based on the hull of the Soviet cargo ship TKS, itself a part of the Almaz military program which included orbital stations, a supply cargo ship, and crewed ships with reusable descent modules.

Nauka is in fact the last surviving, active part of the Almaz program, excluding the hulls and ships which were sold to the Excalibur-Almaz company and to museums for exhibition.  Nauka’s original use as a back up Zarya stemmed from the critical nature of the Zarya module to the overall ISS design; given a launch failure would have set the ISS program back years, Nauka was built as a “quick replacement” to Zarya in case the original module was lost in a launch failure.

Zarya successfully launched on a Proton-K rocket from the Baikonur Cosmodrome on November 20, 1998 and was grabbed by Shuttle Endeavour’s robotic arm, or Canadarm, on December 6 and manually docked to the Unity module.  At this point, Nauka, or FGB-2, as it was called originally, was already 80% complete and now no longer needed for its primary back-up role.

The same year as Zarya’s launch, the Khrunichev Center proposed creating a scientific module for the U.S. segment of the Station based on FGB-2 to replace Destiny, delivery of which from Boeing was running late.  While an agreement of intent was signed, Destiny was completed and successfully sent into orbit in 2001 while FGB-2 remained on Earth.

Not wanting to discard a nearly complete module, in 2004, Roscosmos decided to create a laboratory module based on it for the Russian segment of the ISS.  To do this, FGB-2 had to be completely reequipped — all systems that would have been needed as a Zarya back-up but that were no longer necessary for its use as a science module were removed to make room for scientific equipment. 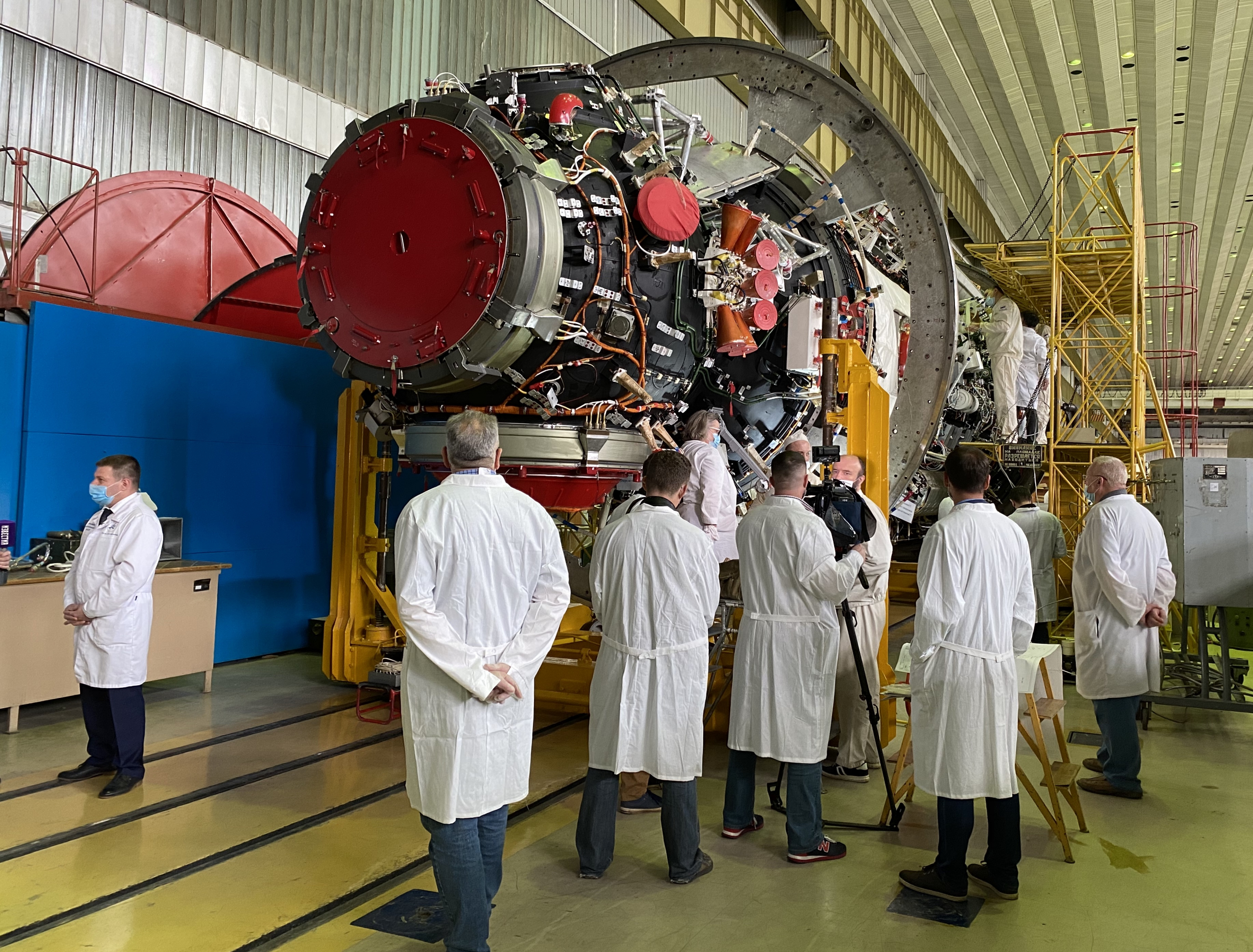 At the same time, Roscosmos partnered with the European Space Agency to install an 11 meter European robotic arm, the ERA, on the new module.  The European arm will be able to help cosmonauts access locations on the Station during spacewalks and remove and install equipment placed on the outer surface of the ISS.

The re-equipment process for FGB-2 was anticipated to take three years, resulting in a 2007 launch.  The module was formally renamed at this time to MLM Nauka.  However, as is often the case in the space industry, the proposed deadlines turned out to be too optimistic.

By 2006, two years into the refit, the launch was postponed to 2009 and then again to 2012.  In December 2012, with another launch delay added, the module was finally moved from the Khrunichev Center, where it was built, to RSC Energia for testing.

Here, a problem was discovered.

In June 2013, RSC Energia specialists reported a large number of defects had been found in the module.  In particular, metal shavings were discovered contaminating fuel lines, which caused the launch date to be postponed to 2014 and the module itself was returned to the Khrunichev Center for pipeline cleaning.

The procedures and bureaucracy took several months, including a slight rename to the module.  According to documents, since the module was already manufactured and fully paid for, it was legally necessary to call its repair an “upgrade.”  From that moment on, the letter “U,” which means “improved,” appeared in the name of the module. 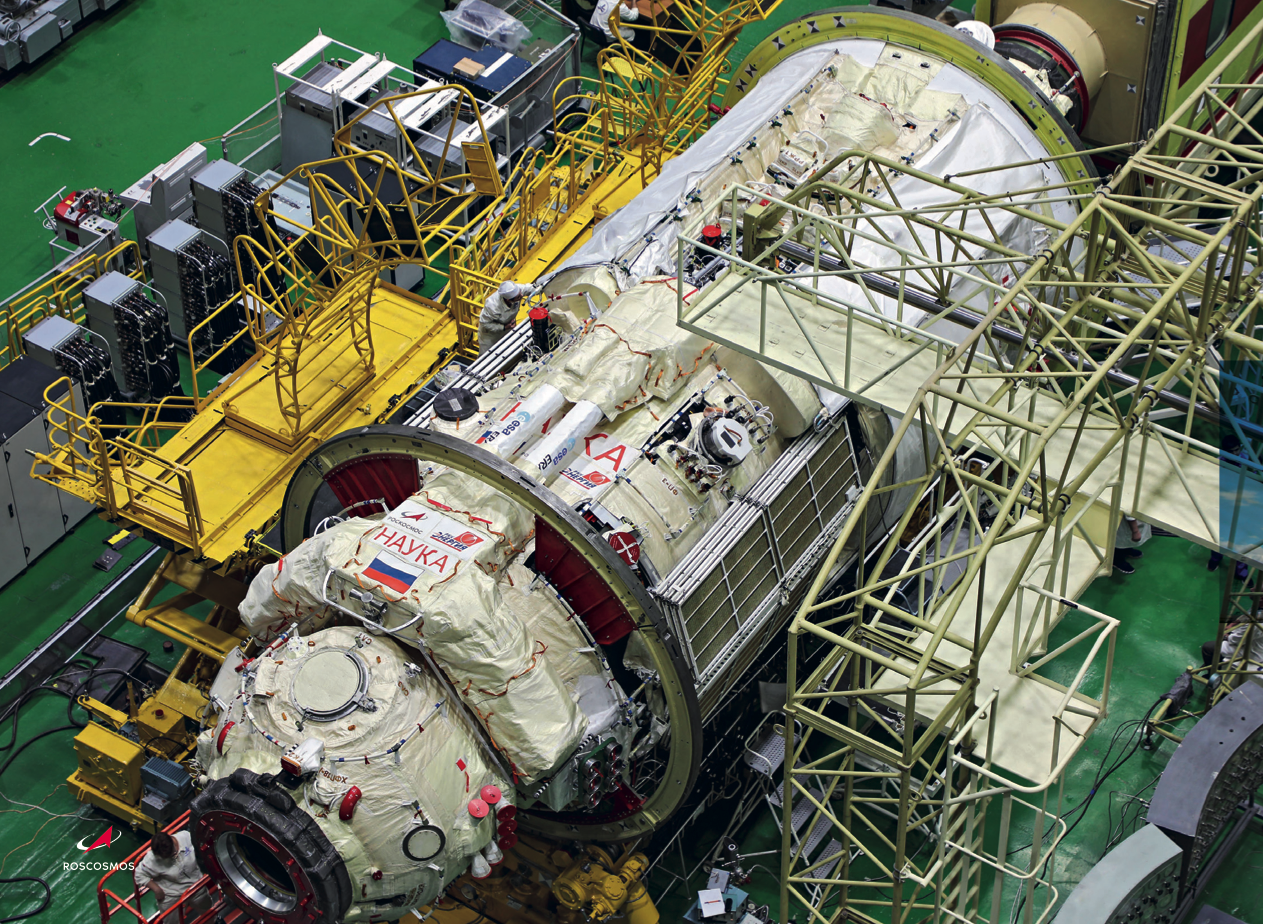 At the end of 2013, the module was finally transported back to the Khrunichev Center and a new launch date was set for 2016.  However, checkout of all systems took three years, due to lack of funding, necessitating another slip to the launch date.

In April 2017, specialists at the Khrunichev Center announced that the same metal shavings previously found in the fuel pipelines were found in the propellant tanks of the module as well.  This statement, combined with another long-term postponement of the launch, led many experts to question if Nauka would ever fly to orbit.

However, the new issue with the tank posed a problem: the propellant tanks for Nauka were made in the 1990s on equipment that no longer existed in 2017 at a factory that was already demolished using technology that now remained only as drawings.

The module’s bellow refillable propellant tanks are 400-liter tanks installed on the outer surface of the housing of the module. These tanks are fueled with unsymmetrical dimethylhydrazine and dinitrogen tetroxide.  From them, fuel travels to the orbital maneuvering engines, which are necessary for orbit correction and rendezvous maneuvers.

The tanks can be refueled by Progress cargo ships in orbit.

Officials were concerned that the metal shavings could travel into the engines and contaminate them, preventing the module from being able to dock with the ISS and burning up in the dense layers of the atmosphere instead.

At first, engineers wanted to flush the tanks under pressure, but this procedure was not successful.  After that, cutting, washing and re-welding of the tanks was tested on a mockup of the module, but it was found that after such a procedure it would not be possible to restore the tanks to their proper condition and strength.

An internal cut-way showing the layout of Nauka. (Credit: Roscosmos)

Additional ideas were considered to:

The possibility of manufacturing new propellant tanks using old technology was not considered due to the lack of equipment for their production.  As a result, it was decided that Nauka would fly with its regular propellant tanks, which would now be used only once.

At the same time, numerous experts in the space industry noted that contamination with metal shavings of 100 microns in size could not affect the engines of the module and that given similar designs it is possible a similar contamination existed in the tanks of Zarya and in the tanks of the Mir station modules but that the older quality control methods couldn’t detect the shavings.

Some experts also noted that metal shavings are a consequence of the very design of the tanks and are formed with every movement of the bellows; therefore simply building new ones would not solve the issue.

Nevertheless, over the intervening three years, all the original pipelines and valves were dismantled and replaced with new ones.  At the beginning of 2020, specialists began a new testing campaign of the Nauka module, and a new launch date was set: May 2021.

I talked with the specialists about this issue. They believe, the absence of the thermal-vacuum isolation would most likely not have damaged the sensors, but no one wanted to be responsible if something happened to them.

The tests lasted slightly longer than expected, and the new official launch date was set for July 15, 2021.  But the adventures of the “multi-suffering” module didn’t end there.

In early July 2021, when the fairing had already been installed over the module for launch, Nauka was suddenly returned to the assembly building.  According to the official version, shortcomings were found, but no further information was stated at first.

The RussianSpaceWeb portal published a report stating that final assembly workers forgot to install the thermal vacuum insulation covers on the star tracker and infrared sensors.  This issue was missed by Roscosmos and apparently only spotted by spaceflight enthusiasts from images posted by the Russian space agency.  The module was returned to the assembly building, and the launch date was postponed again to July 21, 2021.

At 20,350 kg mass, Nauka was near the upper limit of what the Proton-M rocket could deliver to low Earth orbit (LEO).

With a lift capability of 23,000 kg to LEO, the Proton-M lifted off from Site No. 200/39 at the Baikonur Cosmodrome, pitching onto an azimuth, or compass heading, to achieve a 51.6 degree inclination orbit.

The Proton-M for this mission flew in its three stage-to-orbit configuration, with all stages burning the highly toxic dinitrogen tetroxide and unsymmetrical dimethylhydrazine mixture.

The first stage employed six RD-275M engines arranged around the circumference of the first stage tanks.  A hot-stage event, where the second stage ignites while the first stage is still attached and firing, handed off between the two lower stages. 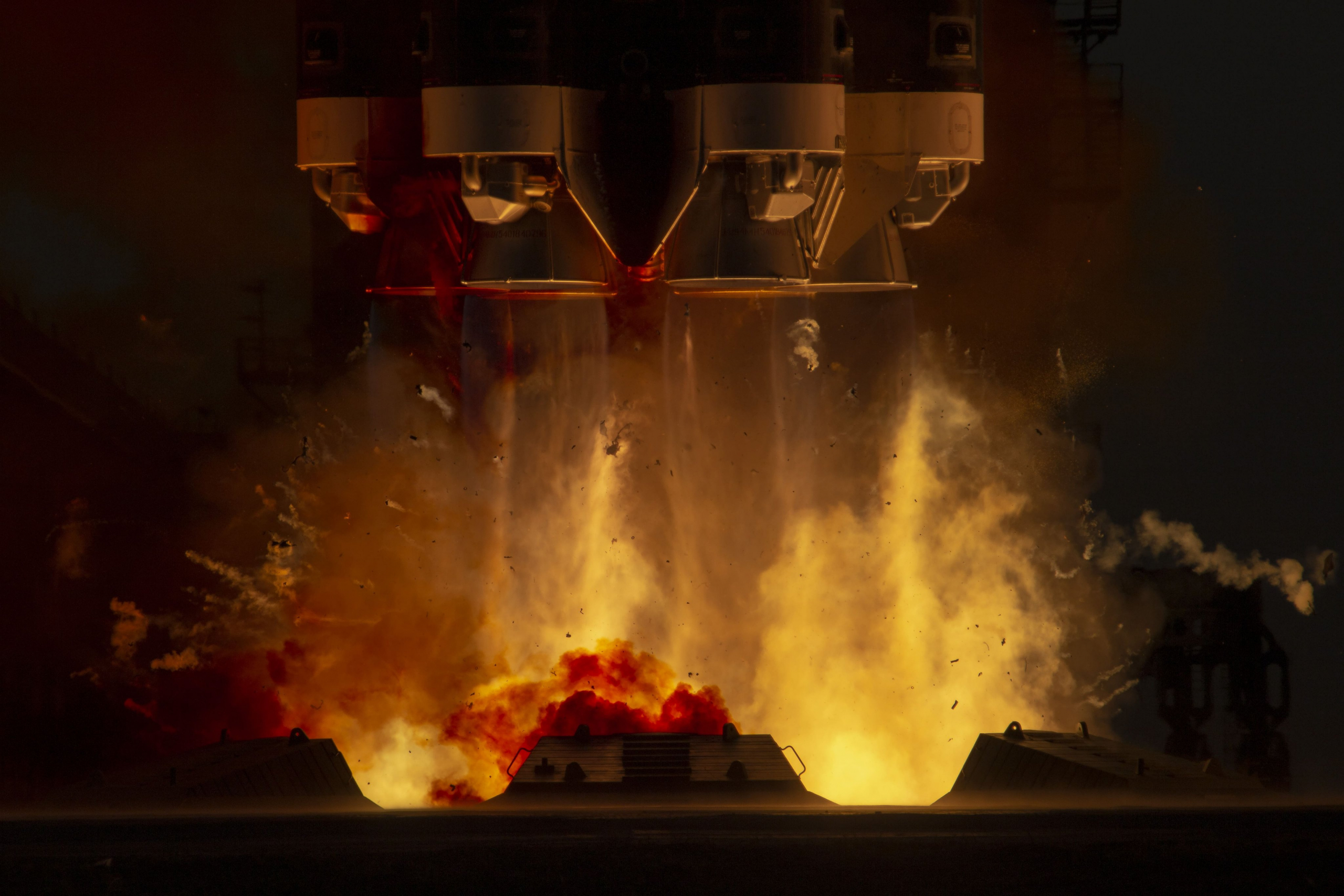 The mighty power of the Proton-M as it lifts off with Nauka. (Credit: Roscosmos)

Payload fairing separation occurred at an altitude of 138 km just after third stage separation and ignition 330 seconds into the flight.

The third stage, 8S812, then completed the launch sequence, placing Nauka into a 190 x 350.1 km orbit in the plane of the International Space Station after a 580 second ascent

Once in orbit, Nauka deployed its solar panels and began eight days of system checkouts and rendezvous burns to gradually raise its orbit up to the 415 km altitude of the Station.  If all goes to plan, Nauka will dock itself to the ISS — under the watchful eye of Mission Control, Moscow, and the Russian crew onboard the Station — on Thursday, July 29.

However, Nauka’s destination on the Station is currently occupied by the Pirs docking compartment — which itself has the Progress MS-16 vehicle docked to it.

If Nauka is declared “go” for arrival to the ISS after a successful launch and initial orbital checkout over July 21 and 22, the Progress MS-16 vehicle will remove the Pirs module from the Zvezda nadir docking port on Friday, July 23 at 13:17 UTC / 09:17 EDT to make room for Nauka.

Pirs will not be removed from the Station until Nauka receives post-launch clearance to proceed with its mission as Pirs is a critical docking port and module for the ISS until Nauka is ready to take its place.  Nevertheless, Pirs will not be brought back to the ISS but will instead remain gripped by Progress MS-16 as the craft deorbits for a destructive reentry into Earth’s atmosphere — making Pirs the first ISS module to be decommissioned and removed from the outpost.

Six days after Pirs’ permanent departure, Nauka is scheduled to perform the final rendezvous sequence with the ISS and dock itself to the Zvezda service module’s nadir location on July 29 at 13:25 UTC / 09:25 EDT.