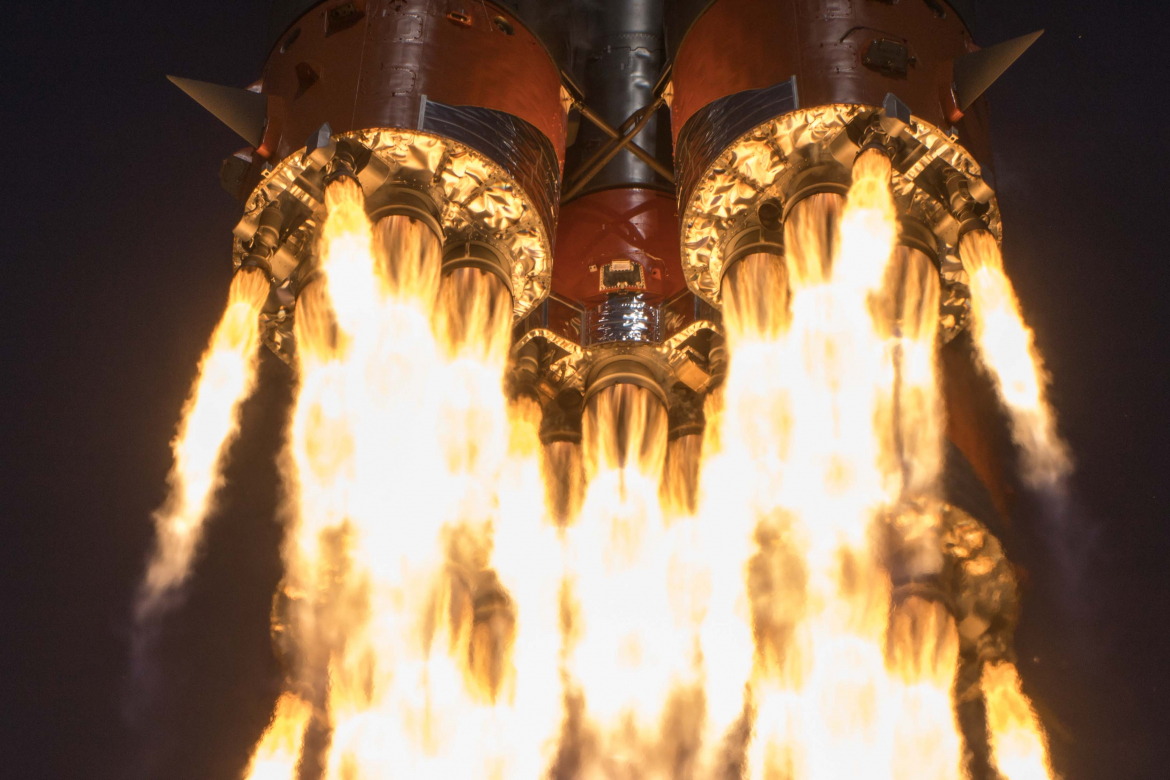 The eighth delivery of OneWeb satellites into Earth orbit lifted off at 12:48 UTC launch on Thursday, July 1 from the Vostochny Cosmodrome in Russia.

Continuing the effort of building an internet constellation, this launch was particularly important in enabling OneWeb to offer full connectivity to areas north of 50 degrees latitude by increasing the constellation’s total strength to 248 operational satellites plus six test satellites.

In doing so, Thursday’s launch will conclude the company’s ‘Five to 50’ goal, not only referencing the Arctic connectivity achievement but also how these last five missions to do so have all occurred on-time and successfully.

In a similar concept to SpaceX’s Starlink and Amazon’s planned Kuiper Project, OneWeb aims to offer high-speed internet services through a low Earth orbit satellite constellation. With efforts beginning in February 2019 with the first delivery of six satellites to orbit, OneWeb has continued to build-out its constellation in an increasingly competitive market.

Each satellite is manufactured at OneWeb’s facility in Merritt Island, Florida, under the name of OneWeb Satellites — a collaboration with Airbus Defence and Space. The individual 147 kg satellites are equipped with a Ku-band antenna, allowing speeds of up to 50 Mbps for land, air, and sea service.

With a production rate of two per day, the satellites are transported via air in batches of 34 or 36 to the launch sites in Russia.

The launch-side of OneWeb’s venture is primarily handled by a partnership of Arianespace, Starsem, and Roscosmos, with the latter manufacturing and processing the Soyuz launcher while Arianespace and its affiliate Starstem handle the commercial sale of the rocket.

The 36 individual satellites arrived at Ignatyevo airport aboard an Antonov 124 and were offloaded and then transported by road to the Vostochny Cosmodrome. There, they were processed and integrated with the RUAG Space-made payload dispenser from which the individual satellites will separate once in orbit.

Meanwhile, the Soyuz 2.1b launch vehicle’s boosters and stages were tested ahead of integration. The 2.1b variant of the launcher has been the vehicle of choice for OneWeb since the first mission carrying operational satellites in February 2020.

Along with the default three stages of Soyuz, OneWeb missions utilize the Fregat as an upper stage — needed to bring the satellites into an initial parking orbit and then into their planned deployment orbit. With its S5.92 engine using hypergolic propellant, the stage can be restarted up to 20 times in space.

Fregat completed fueling on June 17 and underwent encapsulation shortly thereafter, with the upper stage and its accompanying payload dispenser being shielded by Soyuz’s 4.1-meter ST fairing.

In an exclusive for this mission, the fairing features a special mention to OneWeb’s ‘Five to 50’ goal, specifically referencing how all areas north of 50 degrees latitude are soon-to-be covered by their constellation. The fairing art also features the flags of France, the United Kingdom, and India — OneWeb’s ownership and launch service partners.

Introducing our #OneWebLaunch8 Mission Patch! Our 8th launch marks a key moment in our journey here at OneWeb, as it will allow us to provide complete connectivity coverage above the 50th parallel – even including the North Pole itself. Keep an eye out for updates along the way! pic.twitter.com/k0aQnukrEm

The encapsulated fairing was then integrated with the already-completed Soyuz on June 25, allowing teams to perform further system checks involving electrics before deeming the vehicle ready for rollout to the launch pad.

After a satisfactory readiness review by the State Commission, Soyuz 2.1b was moved to Site 1S on June 28 and taken vertical for final launch processing. Further tests were conducted to ensure ground infrastructure was communicating accordingly with the vehicle and the payload.

Thursday’s mission is expected to last over 4 hours 52 minutes, with liftoff scheduled for 12:48 UTC.

At T-16 seconds, the vehicle commanded engine ignition, lighting the single RD-107A engine on each of the four boosters as well as the RD-108A engine on the core stage.

The boosters burned until T+ 1 min 58 secs when they shutdown and jettisoned in the famous Korolev Cross pattern. The core (second stage) continued burning until T+ 4 mins 48 secs, with fairing separation occurring 3 minutes 35 seconds after liftoff.

The third stage’s RD-0124 engine performed a “hot-fire” ignition at T+4 mins 46 secs while the core was still attached and burning. At T+ 4 mins 48 secs, the core shutdown and separated, leaving the third stage to burn for just over four minutes. 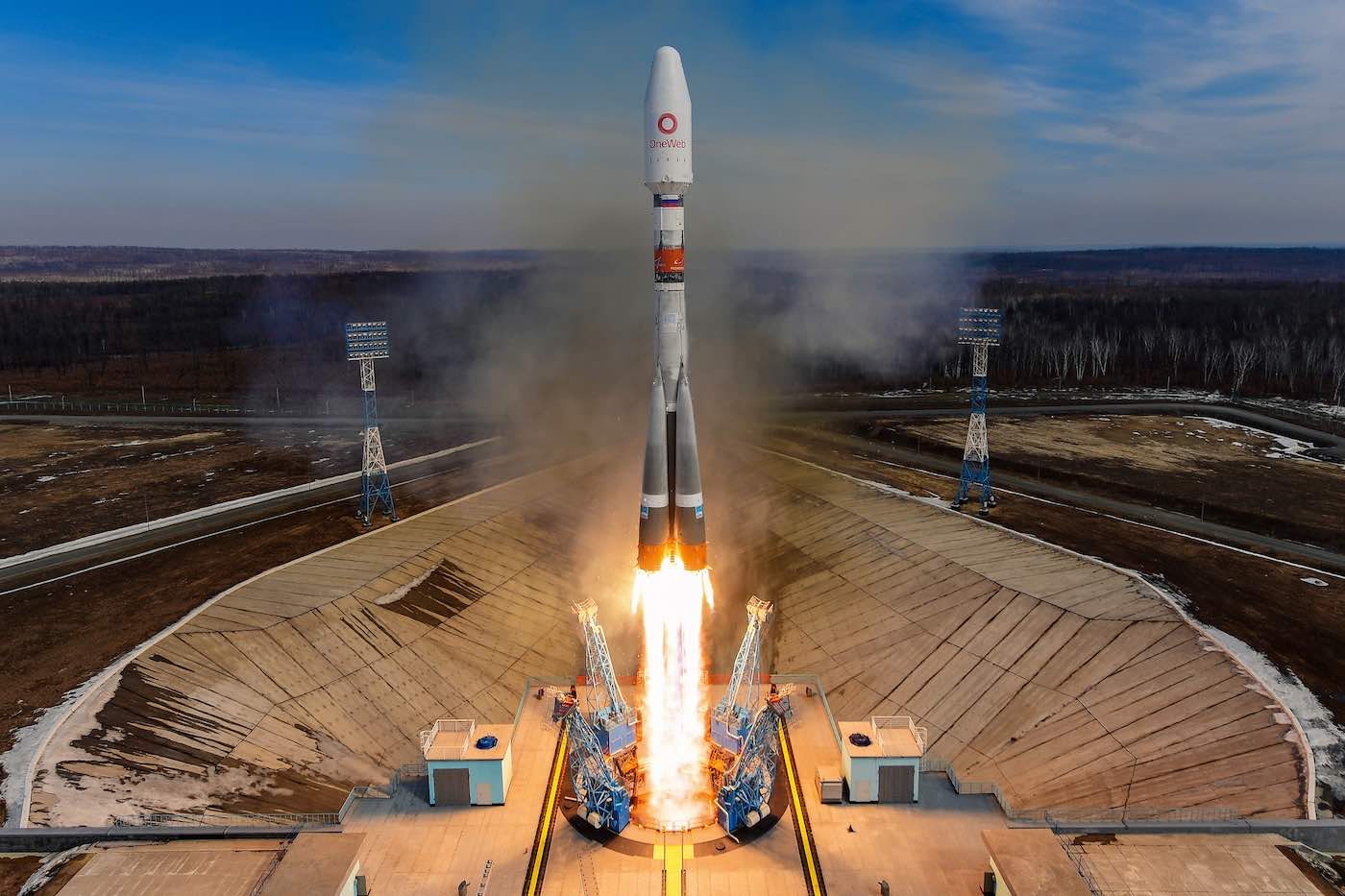 Soyuz lifts off with a batch of OneWeb satellites. (Credit: Roscosmos, Arianespace, Starsem)

Fregat separated from the stage at T+ 9 mins 26 secs and completed an approximately 5 minute burn, ending at T+ 15 mins 29 secs, to place the payloads into an initial parking orbit.

The satellites were sent into an initial orbit of 450 km at an 87.4 degree inclination. Over time, they will raise their own orbit via their onboard Hall-effect thrusters into an operational orbit of 1,200 km where they will remain throughout service.

Once all separation events are complete, Fregat performed a retrograde burn to allow for a safe re-entry in Earth’s atmosphere, mitigating the growing issue of space debris. The mission formally concluded at T+ 4 hrs 52 mins 38 secs.

Our thermal insulation keeps @OneWeb satellites 🛰️working! Thermal insulation ensures a constant interior temperature despite the extreme temperature fluctuations in space. Without this, the sensitive instruments on board would not work properly #OneWebLaunch8 🚀 pic.twitter.com/AOPqZlWKaJ

With the successful completion of Thursday’s mission, the constellation has been boosted towards OneWeb’s immediate goal of 650 satellites, allowing for global connectivity. The company remains on-track to achieve this next year.

Boosting ambitions such as these, OneWeb recently secured a $500 million investment from Bharti Global, an existing shareholder of the company, bringing total funding to $2.4 billion.

Neil Masterson, CEO of OneWeb said: “The completion of our funding puts OneWeb in a powerful position. […] We are intently focused on execution and just ten more launches will enable us to deliver global coverage. Investors have backed the extraordinary efforts of the OneWeb team to deliver more of the global connectivity the World needs.”

50 years later: Remembering the mission, sacrifice of the Soyuz 11 crew