SpaceX welcomes A Shortfall of Gravitas, shuffles Of Course I Still Love You west 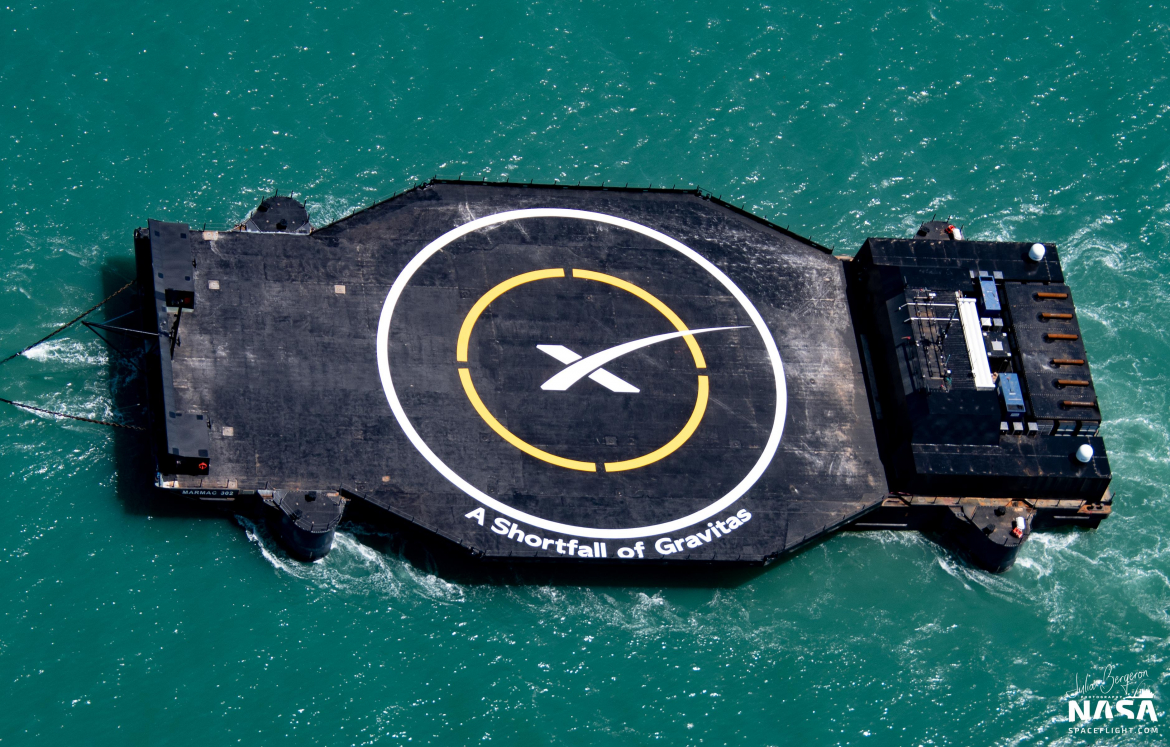 On the morning of July 15, SpaceX’s long awaited droneship A Shortfall of Gravitas sailed into Port Canaveral, Florida. The vessel will bring the number of Florida-based droneships back to two following the relocation of Of Course I Still Love You to the west coast, allowing for more frequent launches of Falcon 9 and Falcon Heavy.

Teased by Elon Musk as far back as 2018, the drone ship was planned “to support high flight rates for F9 and dual ocean landings for FH side boosters.” Two more cryptic tweets in the next 3 years kept speculation alive until the ship was finally spotted at Port Fourchon, Louisiana. Bollinger Shipyards in Port Fourchon had previously supported work on former fairing recovery vessel GO Ms. Tree and Dragon recovery vessel GO Navigator.

A third is under construction

A Shortfall of Gravitas (ASOG) began life as a barge named Marmac 302, making her a relative of SpaceX’s other two droneships. Just Read the Instructions (JRTI) and Of Course I Still Love You (OCISLY) are designated Marmac 303 and 304, respectively. SpaceX’s original droneship, also named Just Read the Instructions, was Marmac 300 and supported three missions in 2015, never completing a successful recovery.

On July 9, ASOG left Louisiana for Port Canaveral, Florida. After completing a sea trial offshore, the ship and its tug—Finn Falgout—turned on course towards Florida.

Overall, ASOG appears to be more modern than the others, and her deck lacks the thrown together look of OCISLY and JRTI. The standard sea van containers used to hold navigational, electrical, and other equipment have largely been contained within a purpose-built superstructure.

The “wings,” or structural pieces added to the sides of the deck in order to increase landing area, also appear to be different, with the corners removed from the normal rectangular shape. While this extra landing area may have been useful in early experimental landings, SpaceX’s matured recovery systems have produced very precise landings more recently.

ASOG features four large thrusters on each corner of the ship which appear to be the same type of thrusters installed on JRTI. The diesel engines used to power the thrusters are located within the black superstructure.

While the other droneships require a tug boat to provide propulsion for the entire several day journey to and from a landing zone, usually several hundred kilometers offshore, Musk confirmed on Twitter that ASOG can indeed operate without a tug. Regulations may still require tugs to move ASOG in and out of port before an autonomous system takes over just offshore, and ASOG’s thrusters will still perform station keeping once at the landing zone, just like the propulsion systems on OCISLY and JRTI.

Like its sisters, ASOG will feature an Octagrabber robot used to secure boosters to its deck after landing. The Octagrabber was built at SpaceX’s Cidco Road facility in Florida, just like the one given to Just Read the Instructions after its move to the east coast.

Prior to ASOG’s arrival, SpaceX operated both JRTI and OCISLY on the east coast. With a third droneship coming, however, and the resumption of Falcon 9 launches from Vandenberg, California, on the horizon, the company opted to send the oldest of the three ships to the Port of Long Beach via the Panama Canal.

On average, the sea conditions (and number of recoveries) on the west coast are much more favorable than on the east coast—meaning OCISLY will enjoy a relaxed “retirement” in California while the upgraded ASOG takes on the harsh Atlantic.

OCISLY completed the journey in around 1 month; she rode on top of the massive transport ship Mighty Servant 1—a ship that can submerge itself in order to take on large cargo. This allowed the droneship to complete the journey more quickly than if it had been towed by a tug the entire way.

While SpaceX launch activity has decreased for the short term future, the company is now in a position to resume launching with an even greater cadence—the vast majority of these launches supporting the company’s Starlink satellite internet constellation. SpaceX plans to launch batches of Starlink satellites to polar orbits from both the east and west coast, as well as continuing mid-inclination launches from Florida. 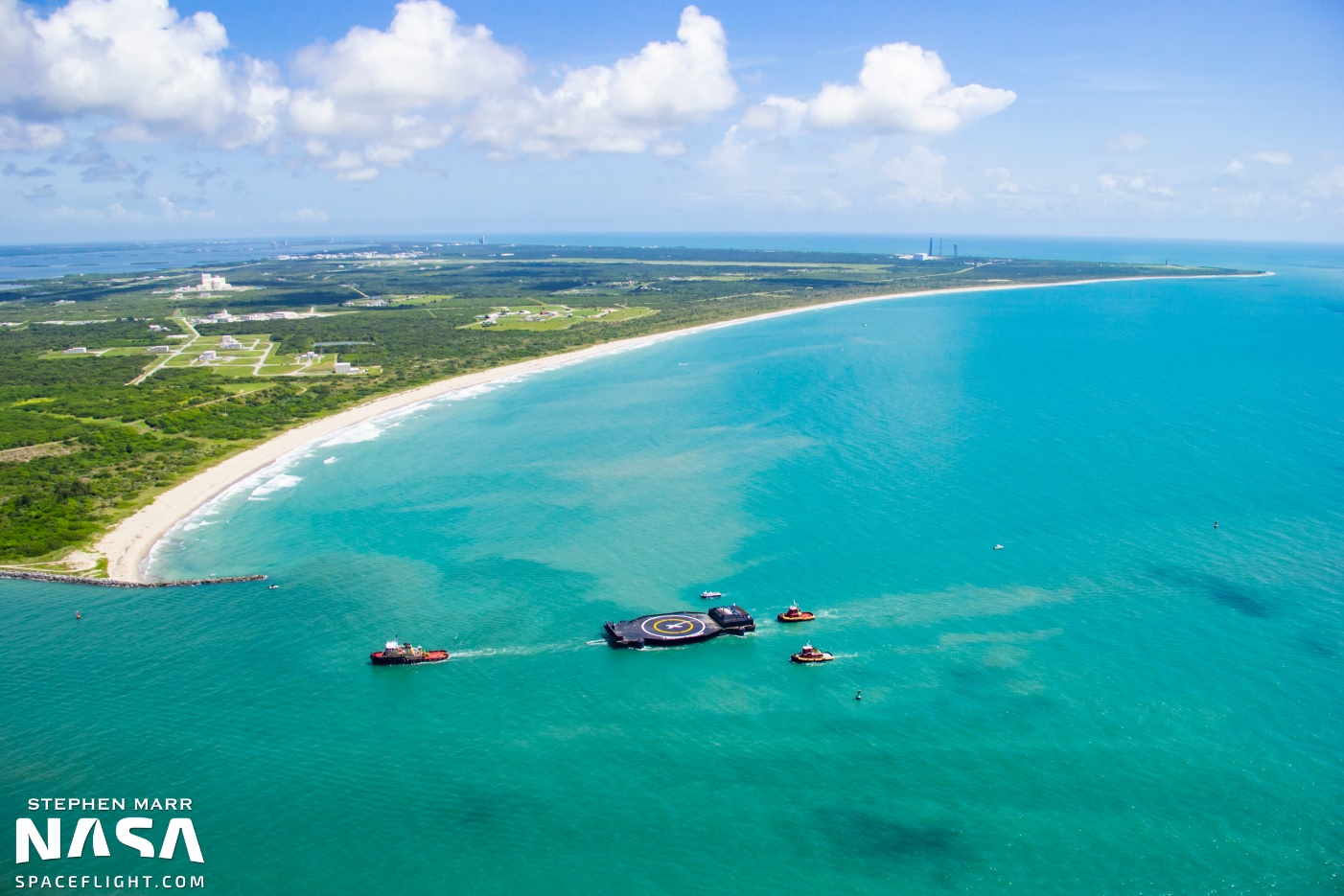 A Shortfall of Gravitas, towed by Finn Falgout and accompanied by Port Canaveral tugs, enters Port Canaveral with the Cape in the background – via Stephen Marr for NSF/L2

These satellites will be upgraded and may feature laser inter-satellite links, an important evolution for the Starlink network. The Starlink launch salvo will likely resume some time in August.

Earlier today, Shelia Bordelon unloaded the fairing that recovered from the water during the most recent Starlink mission.

While the two temporary ships served their roles well, a more permanent solution for fairing recovery is expected some time this year. SpaceX is also expected to continue scooping fairings out of the water, as it has proven to be much more reliable than catching the falling hardware.