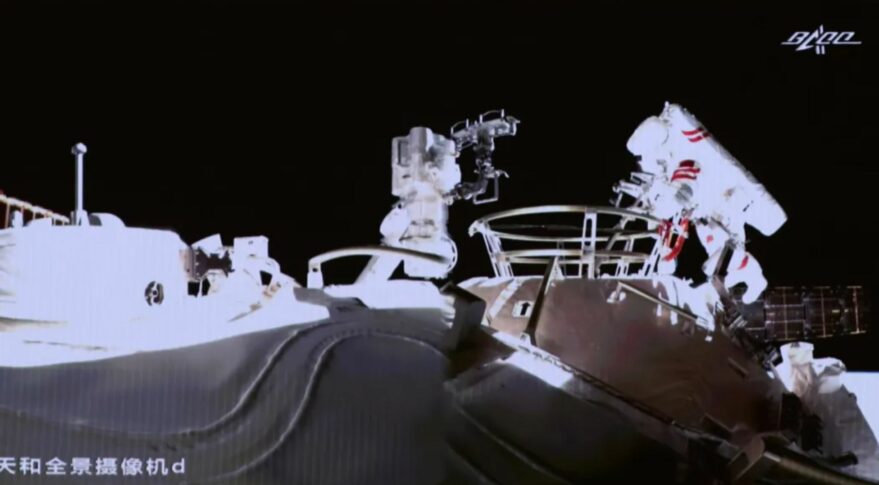 Taikonauts Liu Boming and Tang Hongbo have successfully conducted the second ever Chinese Extravehicular Activity (EVA), or spacewalk, and the first in a series to support of the construction of the newly launched Chinese Space Station (CSS).

The EVA began on July 4 at 00:11 UTC and completed at 06:57 UTC, for a total duration of six hours and 46 minutes. This duration is more typical of the regular spacewalks conducted outside the International Space Station (ISS) compared to China’s first EVA on Shenzhou 7, which lasted only 22 minutes.

Liu and Tang launched from the Jiuquan Satellite Launch Center on June 17 aboard a Long March 2F rocket carrying the Shenzhou 12 spacecraft, alongside Commander Nie Haisheng. Approximately six and a half hours after launch, Shenzhou 12 docked with Tianhe, the core module of the CSS which launched on a Long March 5B rocket in April. 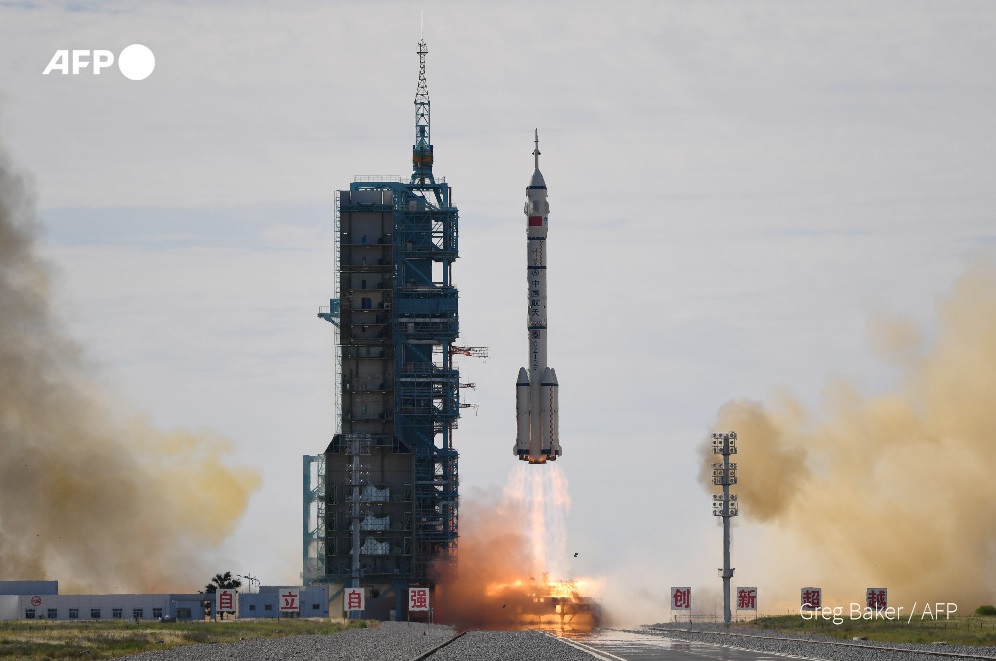 The three Taikonauts are scheduled to spend around three months aboard Tianhe, activating and testing its critical habitation, command, control and propulsion systems ahead of further construction and crewed missions to the orbital station. As part of this effort to bring the new station to life, two spacewalks have been scheduled to be carried out by the Shenzhou 12 crew.

While Liu and Tang were outside on Sunday’s EVA, Nie remained inside by operating the Tianhe module’s robotic arm.

This marks the first time China has participated in an EVA since Taikonaut Zhai Zhigang performed China’s first spacewalk during the Shenzhou 7 mission in 2008. Liu also participated in that historic spacewalk in 2008, remaining inside of Shenzhou 7’s depressurized orbital module and assisting Zhai from inside the spacecraft. Sunday’s EVA was the first for Tang Hongbo.

In common fashion for the Chinese National Space Agency (CNSA), very little information was publicly shared about the planned EVA beforehand, although the Taikonauts aboard the station were seen preparing their Feitian space suits for the first excursion during a live stream from the station last month. 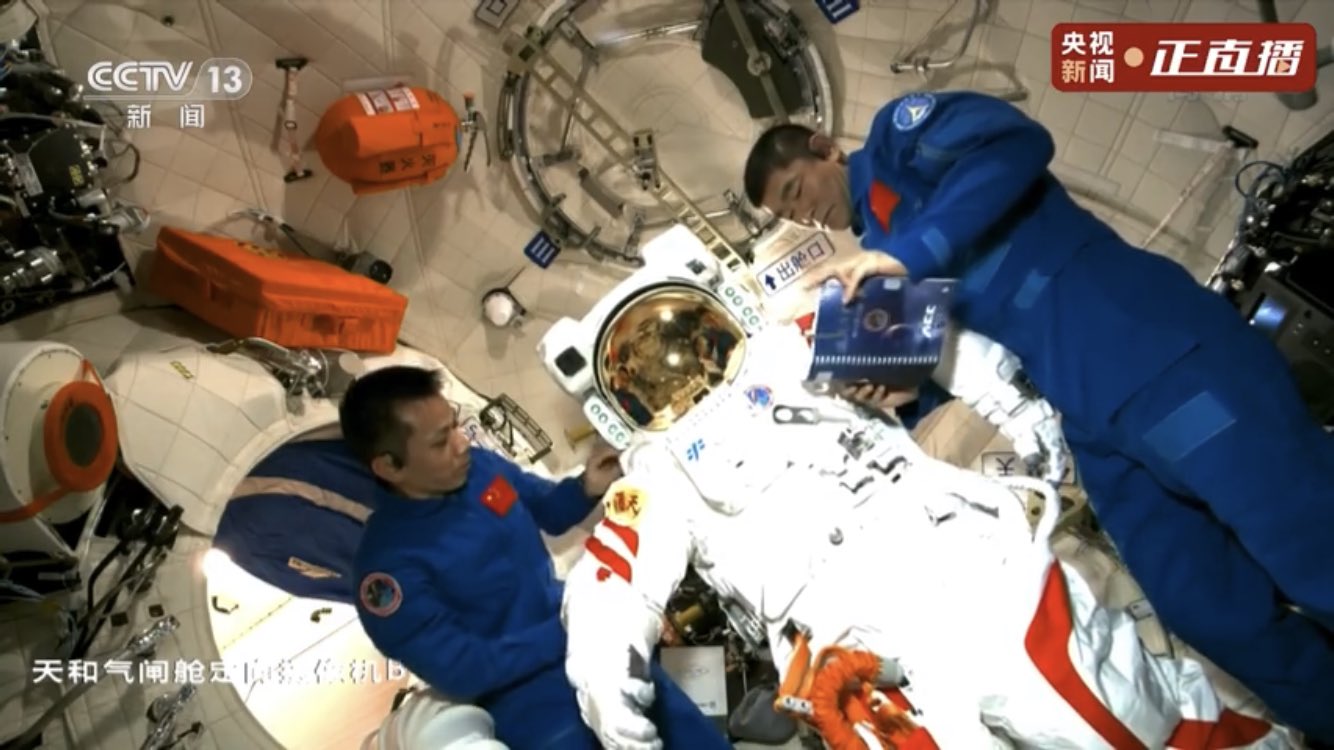 The original Feitian EVA suit was used by Zhai on Shenzhou 7, and was developed based on the Russian Orlan-M EVA suit, which used on Mir and the ISS until being retired in favor of the upgraded Orlan-MK and then Orlan-MKS suits. Liu wore an Orlan-M suit while supporting Zhai’s 2008 spacewalk. The Feitian suits have since been upgraded to a new generation for use on board the CSS, starting with Sunday’s EVA.

During the same live stream, broadcasted by the China Central Television (CCTV) network on June 23, it was also reported that the first spacewalk would occur in around “ten days.” The spacewalk was conducted 11 days later on July 4.

The three taikonauts began preparing for their excursion in the late hours of July 3, with Liu and Tang opening the hatch at 00:11 UTC on July 4 (8:11 AM Beijing Time) and exiting Tianhe’s airlock module, beginning China’s second ever spacewalk.

Upon exiting the airlock, Liu is believed to have said “哇，外面好美啊,” translated to “Wow, it’s too beautiful outside!” 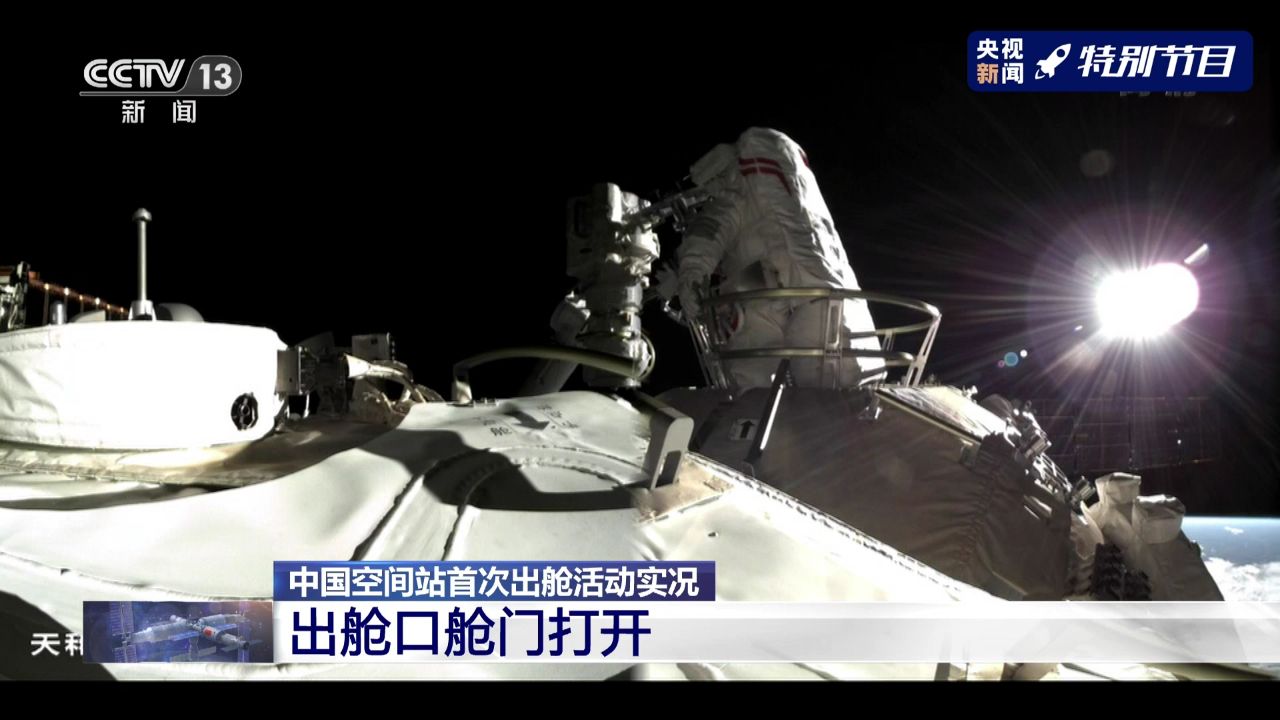 The two shortly exited the airlock and began their work outside of the station, which included the installation of new foot restraints and an EVA platform for future spacewalkers on Tianhe’s robotic arm. This arm was then used during the remainder of the spacewalk.

For the duration of the EVA, Liu remained attached to the remotely operated robotic arm, becoming the first taikonaut to “ride” the arm. This is a common practice carried out by astronauts and cosmonauts aboard the ISS, which has foot restraints built into its Robotic Manipulator System (RMS), also known as Canadarm2, allowing an astronaut to be fastened to it and be robotically moved around the station.

While Liu was fastened to Tianhe’s Robotic Manipulator System, Tang translated around the station using the handrails attached to the outside of the module.

Another accomplished objective of the EVA was completing the installation of a panoramic camera, which was folded for the module’s launch. The pair of taikonauts also tested an emergency return to the airlock, in preparation for future regular spacewalks as the CSS is constructed over the next few years. 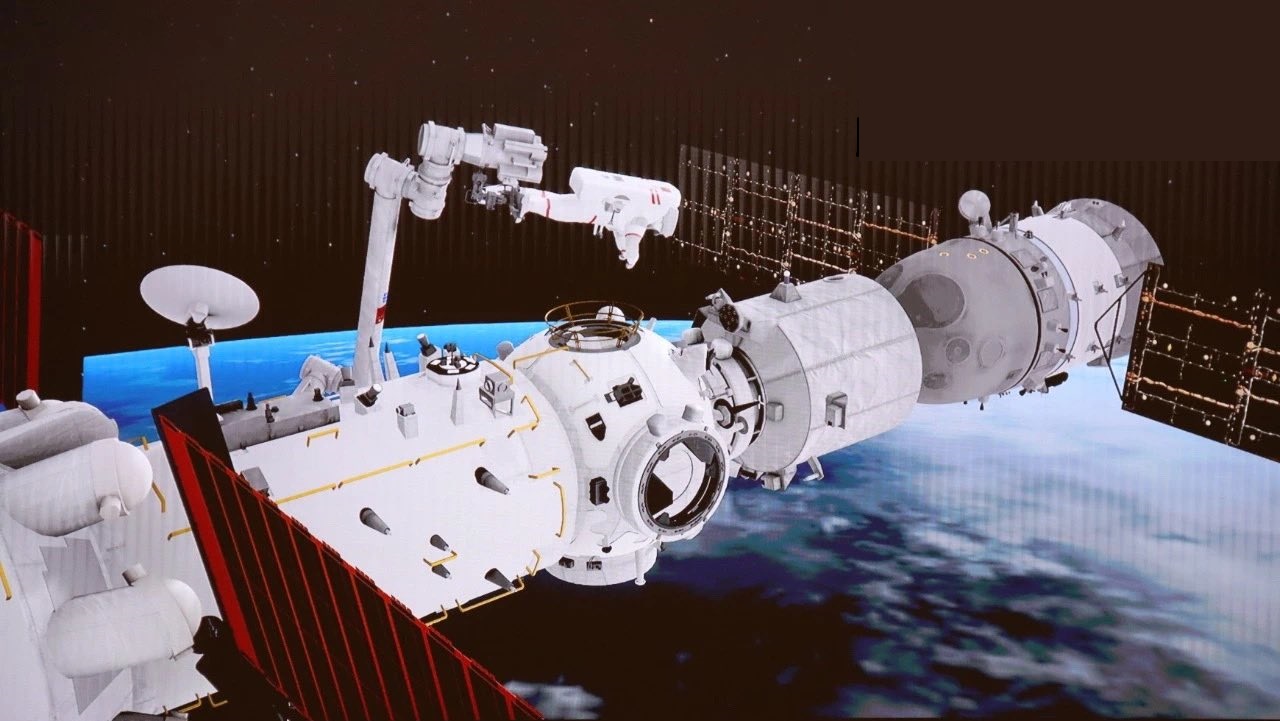 The two spacewalkers officially concluded the EVA at 06:57 UTC, ending a 6 hour and 46 minute excursion, a big leap from China’s previous record of 22 minutes. One more spacewalk is set to be carried out during Shenzhou 12’s remaining months on the CSS, although the CNSA has yet to release an official statement regarding the goals of the second EVA, when it will occur, and which taikonauts will take part.

Future missions in support of the new CSS are planned throughout 2021 and beyond. In just a couple days, currently planned for July 6, a new Tianlian-1-05 satellite will be launched aboard a Long March 3C rocket from the Xichang Satellite Launch Center to provide data relay services from geostationary orbit. The new satellite will provide coverage over South America, an area where the current Chinese relay network cannot communicate with the CSS.

In September, the crew of Shenzhou 12 will return to Earth after three months on board Tianhe. This will be followed by the launch of the Tianzhou 3 cargo spacecraft to prepare for the second CSS crew’s launch on Shenzhou 13 in October.

Additional crew rotations, cargo missions, and the addition of more modules are expected in 2022.