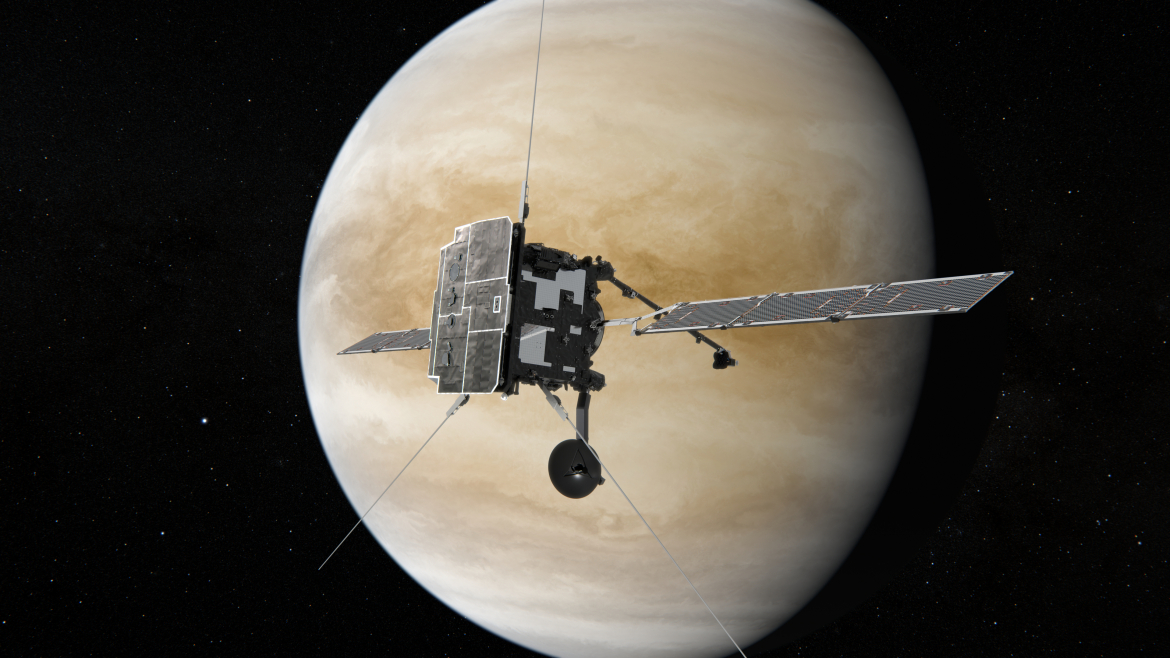 The historic double flyby was a result of the two spacecraft attempting to reduce their orbital energy while en route to their respective destinations. BepiColombo is traveling to Mercury, where it will study the planet in-depth, while Solar Orbiter is finishing its last flybys before entering the correct orbital inclination to best observe the Sun.

The double flybys required great accuracy and precise deep-space network coordination to ensure the two trajectories did not cross. During the flyby, both BepiColombo and Solar Orbiter collected data on Earth’s sister planet.

Both Solar Orbiter and BepiColombo are equipped with cameras; however, they are not high-resolution. Nonetheless, their science cameras were able to capture black-and-white images — showing the planet’s immense brightness and full cloud coverage.

Solar Orbiter’s SoloHI imager, used primarily to image the solar wind, or the charged particle streams ejected from the surface of the Sun, was used on the Venus flyby to observe the nightside of the planet during the approach.

BepiColombo, like Solar Orbiter, used a suite of three science cameras to collect imagery of the planet as well. The spacecraft collected images throughout the entire flyby.

The full set of BepiColombo images from the flyby can be found in ESA’s Planetary Science Archive.

Venus is the solar system’s hottest planet, and it was expected that when BepiColombo came within 552 km of the surface on the dayside of the planet it would experience a temperature increase on its instruments and systems.

JAXA’s contribution to the BepiColombo mission, the Mercury Magnetospheric Orbiter (MMO), recorded a temperature increase of 110ºC on one of the module’s eight solar panels. The panel’s temperature changed from -100ºC to a +10ºC at the time of closest approach. 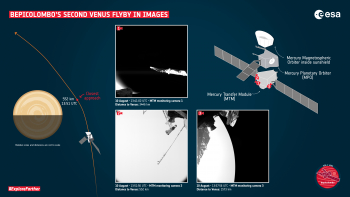 On ESA’s Mercury Transfer Module (MTM), the temperature increased by 50ºC on an onboard radiator. The Mercury Planetary Orbiter (MPO) recorded a temperature change of about 20ºC.

To stay pointing on course, both BepiColombo and Solar Orbiter use reaction wheels to maintain their orientation. These wheels spin faster at times when the spacecraft is experiencing periods of intense gravitational pull like they did during the Venus flyby.

The Italian Spring Accelerometer (ISA) instrument on the MPO module of BepiColombo collected data on the spacecraft’s acceleration with great sensitivity.

Using data from the angular momentum of the reaction wheels during the flyby, the BepiColombo ISA instrument team translated the acceleration data into a frequency audible to the human ear.

The BepiColombo and ISA teams will use this data to fine-tune the instrument ahead of its use at Mercury.

The BepiColombo team took the data from the MPO magnetometer and created a simple sonification of the variability of the magnetic field. The audio from the sonification presents low-frequency wind-like noises from the solar wind’s interaction with the Venusian atmosphere.

BepiColombo’s transition into calm solar wind at the bow shock, the location where a planet’s magnetosphere meets the solar wind, was clearly recorded.

The Solar Orbiter magnetometer data was similar to that of BepiColombo’s, showing the magnetic field was increasing in magnitude during approach due to the compression of the magnetic field. As the spacecraft crossed the bow shock, the magnitude sharply decreased.

Teams from both of the missions are currently undertaking a detailed analysis of the two datasets from the flyby.

Ions in the magnetosphere

With an encounter this close, the MPO module’s MErcury Radiometer and Thermal infrared Imaging Spectrometer (MERTIS) instrument could capture atmospheric spectra of Venus while the planet filled its field of view.

This kind of high-resolution spectra data had not been obtained since the Soviet Union’s Venera 15 mission in the early 1980s.

A snapshot from @bepicolombo #VenusFlyby captured only a few hours ago! This image was taken 6 minutes after closest approach, from a distance of 1573 km. More images will be sent back overnight – #StayTuned! #ExploreFarther https://t.co/gpg2iaUXIk pic.twitter.com/s6OzWH3Nbp

From the data, an expected band of carbon dioxide and other spectral features was seen. A full analysis of the data and the atmosphere’s thermal structure will take weeks to complete.

Like the ISA, the use of MERTIS at Venus helped fine-tune the instrument before its use at Mercury, where it will perform the first-ever thermal infrared observations of the planet by a spacecraft.

BepiColombo is expected to perform its first of six flybys of Mercury on October 1, 2021. In 2025, BepiColombo will release the two planetary orbiters it is carrying into Mercury’s orbit, where they will study all aspects of the solar system’s smallest planet.

Solar Orbiter is currently expected to complete its final flyby of Earth on November 27, where it will pass just 460 km above the surface. After the flyby, the spacecraft will be in the correct orbital inclination to study the Sun, and Solar Orbiter’s primary mission will begin.

It will continue to perform flybys of Venus for the duration of its mission to increase its orbital inclination for optimal observation of the Sun’s unknown polar regions.