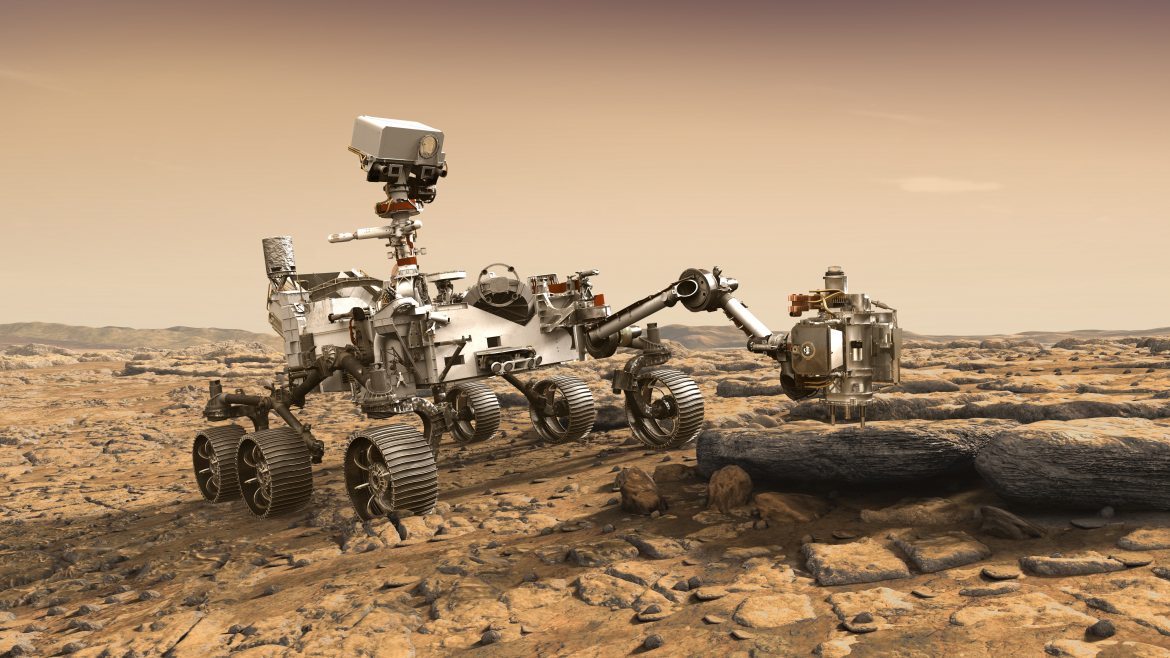 NASA’s Perseverance Mars rover recently attempted its first-ever sample collection of the Martian surface on August 6. However, data shows that while the rover’s drill successfully drilled into the surface, no regolith was collected in the sample tube.

Meanwhile, as Perseverance was preparing for the sample collection event, a team of researchers using ESA’s Mars Express orbiter found evidence that previously thought of lakes of water underneath Mars’ south pole might actually be made of clay.

On August 6, Perseverance’s 2-meter robotic arm lowered to the Martian surface, where a drill located at the end of the arm began carving into the local rock.

Inside the bit used to drill into the surface was a small, hollow titanium cylinder container. This container aimed to collect the dust, sand, rock, and other regolith displaced by the drill. Once the drilling was complete, the tube should have been filled with surface material the size of a piece of chalk.

This entire process is called sample collection and is a crucial part of Perseverance’s mission as well as two follow-on NASA and ESA Sample Return flights slated for launch in 2026.

However, the August 6 drilling event data shows that the sample collection tube did not collect any surface material.

#SamplingMars is one of my most complicated tasks. Early pics and data show a successful drill hole, but no sample in the tube–something we’ve never seen in testing on Earth. Mars keeps surprising us. We’re working through this new challenge. More to come. https://t.co/XyXBssvKe6 pic.twitter.com/VTNvMA2jqN

Mission operators, reviewing the data returned, found that the coring bit and the sample tube were in the correct positions for the sample collection. Further data showed that Perseverance successfully performed the post-drilling operations as intended and that the tube was processed correctly.

Yet after the entire drilling process was complete, measurements indicated the tube did not have any surface material inside of it.

“The sampling process is autonomous from beginning to end. One of the steps that occur after placing a probe into the collection tube is to measure the volume of the sample,” said Jessica Samuels, surface mission manager for Perseverance at NASA’s Jet Propulsion Laboratory (JPL).

“The probe did not encounter the expected resistance that would be there if a sample were inside the tube. The initial thinking is that the empty tube is more likely a result of the rock target not reacting the way we expected during coring, and less likely a hardware issue with the Sampling and Caching System.”

An immediate course of action is to use the WATSON (Wide Angle Topographic Sensor for Operations and eNgineering) camera to investigate the drill hole. WATSON is located at the end of the 2-meter robotic arm, allowing it to observe the hole from various angles at close range. 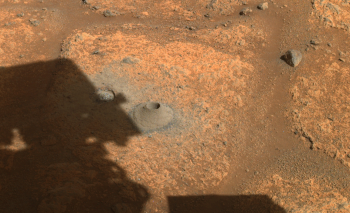 This image, taken by one of Perseverance’s Front Hazard Avoidance Cameras, shows the hole drilled by the rover. (Credit: NASA/JPL-Caltech)

Perseverance’s teams will use the data from the August 6 event and WATSON’s observations throughout the coming days to correct the issue ahead of future sampling attempts.

“Over the next few days, the team will be spending more time analyzing the data we have and also acquiring some additional diagnostic data to support understanding the root cause for the empty tube,” said Trosper.

Part of Perseverance’s mission is to leave sample containers at specific locations along its route so that a future Sample Fetch Rover, to be launched in 2026 for a three year cruise to Mars under the current plan, can retrieve them and bring the samples back to a co-launched Mars Ascent Vehicle that will take them into Martian orbit for rendezvous with an ESA-built Earth Return Orbiter for the trip back to Earth.

Deeper under the Martian surface then Perseverance’s sample collection activities, a group of researchers led by Roberto Orosei of Italy’s Istituto Nazionale di Astrofisica announced in 2018 evidence of subsurface water lakes below the ice cap at Mars’ south pole.

Using ESA’s Mars Express orbiter, bright radar signals were seen through the rock and ice of the Martian south polar ice cap, signals that could be interpreted as liquid water.

As with every scientific observation, scientists began searching for ways to see whether these lakes were what they appeared to be or if there were in fact something different.

Clays, not water, may be the source of “lakes” detected on Mars, according to a new study. It’s one of three in the last month in which scientists took a closer look at radar data peering under the ice of the Martian south pole. https://t.co/mI85NFjnBE pic.twitter.com/VYbU7ulzVB

In three recently published studies from various teams, new data suggests that the lakes aren’t made of liquid water, but rather from clay instead.

All three of the studies used the same data from the 2018 study led by Orosei. The Mars Express’ Mars Advanced Radar for Subsurface and Ionospheric Sounding (MARSIS) instrument collected the data/evidence used.

MARSIS bounces radio waves off Mars’ surface and atmosphere and then listens for the radio waves that travel back to it, called “echoes.” MARSIS then analyzes these echoes.

The result was dozens of bright spots, just like the ones in the 2018 Orosei et al. study, in Mars’ southern polar ice cap. However, the new research, recently published in the journal Geophysical Research Letters, suggests that liquid water physically cannot exist in these “lakes.”

In their paper, Plaut and Khuller observe that the signals from the bright spots are too close to the surface where it would be too cold for water to remain liquid, even when mixed with perchlorates which lower water molecules’ natural freezing point. 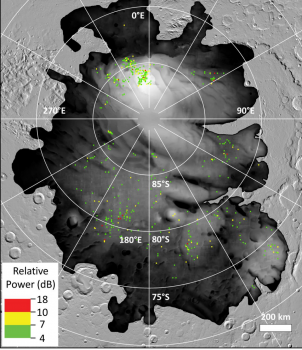 This image of Mars’ south pole ice cap shows were the bright radar spots were seen in the MARSIS data. (Credit: ESA/NASA/JPL-Caltech)

Furthermore, Carver Bierson of Arizona State University et al., in their review, showed that materials such as clays, metal-bearing minerals, and saline ice could cause the reflective signals shown in the MARSIS data. Bierson et al.’s results are also published in the journal Geophysical Research Letters.

Furthering Bierson et al.’s research in his paper, Issac Smith of York University in Toronto, took their research and — remembering that a group of clays, called smectites, were common all over Mars’ surface — started measuring smectite properties.

In the lab, Smith et al. took samples of smectite and measured how radar signals interacted with them by putting the samples into cylinders designed to measure radar signals.

Smith et al. then cooled the smectite with liquid nitrogen, freezing them to minus 50°C — a temperature close to what it would experience at the Martian south pole.

After numerous tests, Smith et al. compared their results to the MARSIS data and found that smectite’s response in the lab almost perfectly matched the signals seen in the MARSIS data. 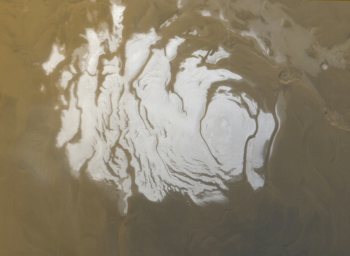 The southern polar ice cap of Mars imaged by Mars Global Surveyor in 2000 during Martian summer. Smith et al. used MRO to search for smectite in this area. (Credit: NASA/JPL/MSSS)

And it found them at the south pole in the areas surrounding the bright radar spots seen in the MARSIS data.

Researchers caution that the only way to confirm what the bright radar spots found in the MARSIS data really are is to land at the south pole; however, collective new research highly suggests these previously-thought-of-lakes are made of clay.

Mars Express is in its 18th year of operation, having launched on June 2, 2003 on a Soyuz-FG/Fregat rocket from Kazakhstan and entered Martian orbit on December 25 that same year. The orbiter is currently in an approved mission extension period that lasts until December 31, 2022.