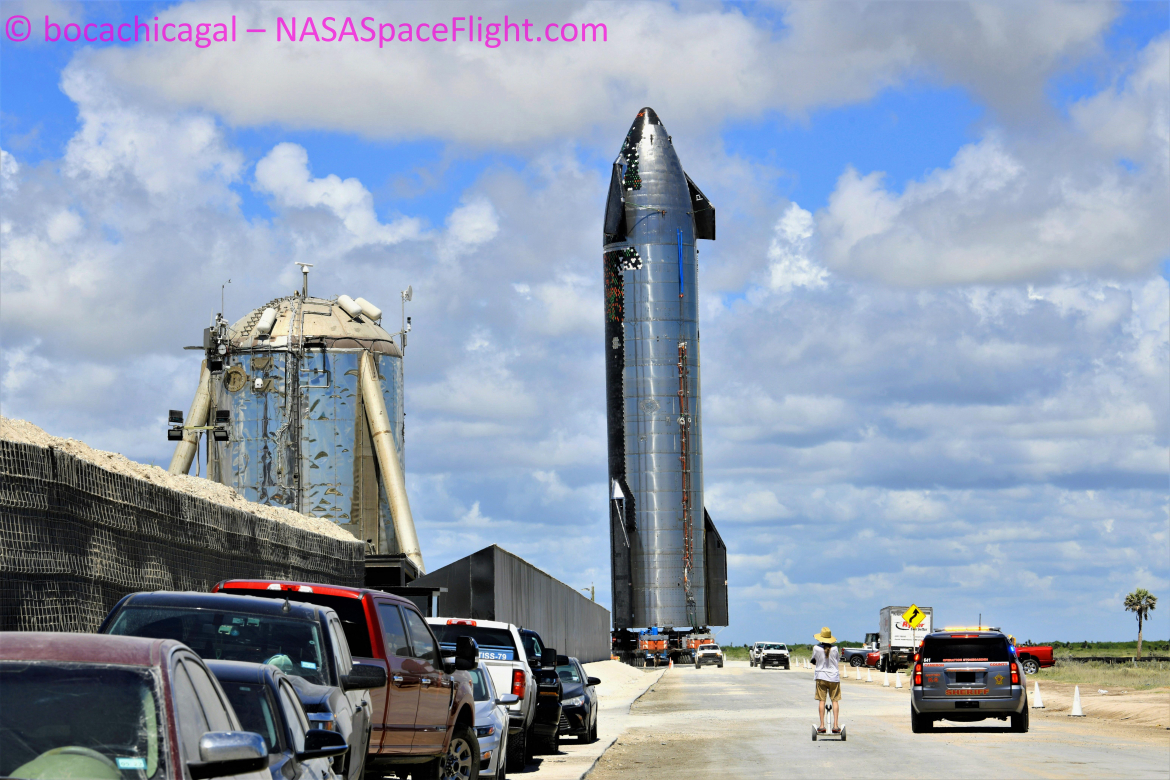 The 150-meter flight was the last of a long line of tests that Starhopper, the first vehicle in the Starship program, conducted. It was based on the Big Falcon Rocket (BFR, a previous name for Starship) 2018 design. Starhopper used a single Raptor engine and three non-retractable legs.

After several static fires, a one-meter tethered hop, and several scrubs, Starhopper conducted a 20-meter hop on July 25, 2019. This was Starhopper’s first major flight and the first time a Raptor was used in flight.

Starhopper conducted its final and major flight on August 27, 2019, when it conducted the 150-meter flight test. This flight proved the, at the time, new Raptor engine.

Starhopper permanently sits at the launch site in Boca Chica as a water tank, communications, weather, and tracking station for operations conducted at Boca Chica.

After the successful Starhopper test campaign, other Starship test vehicles MK1, SN1, and SN3 were tested but failed during cryoproof. SN4 was the first to pass cryoproof, the first to complete a static fire, and would later complete three more static fires before failing on its fifth static fire.

These tests ultimately led to the successful flight tests of SN5 and beyond.

Just under a year after the 150-meter Starhopper test flight, on August 4, 2020, SpaceX launched Starship SN5 to 150-meters. At the time consisting only of the tank section, a “hat” used as a mass simulator for Starship’s nose cone, and a single Raptor engine, the 150-meter tests would help prove Starship’s overall structure. SN5, using Raptor 27, launched from Suborbital Pad A and landed on the landing pad in a perfect test flight.

SN5 was later saved and placed at the build site for storage. Its twin, SN6, would later begin its testing and flight campaign.

Starship SN6 rolled out from the Boca Chia build site to the launch site on August 12, 2020. It was placed on Pad A shortly after arrival. Four days later, SN6 was loaded up with cryogenic liquid nitrogen and conducted a cryoproof test to ensure it could handle the pressure and stresses of cryogenic propellant.

On August 18, Raptor 29 was delivered to Pad A to be installed on SN6 for its static fire and flight test. Two days later, the Raptor roared to life for the first time with a successful static fire test ahead of flight operations. The successful test allowed SpaceX to begin the final preparations of SN6 for its flight test. SN6 received its “hat” on August 27, a year after Starhopper’s 150-meter flight.

SN6’s first two flight attempts took place on August 30, 2020, with the first attempt aborted due to a technical issue. A second attempt was scrubbed due to high winds. After four days of high winds and fixing technical issues, SN6 began its launch preparations. At approximately 11:47 am CDT, Raptor 29 roared to life once more and lifted SN6 off Pad A. After climbing to 150-meter, SN6 began its descent to the landing pad and successfully landed.

The main objective for SN6 was to complete the same test campaign and flight as SN5 but at a faster rate. SN6’s campaign lasted three weeks compared to SN5’s five weeks. After successfully landing, SN6 was detanked. Just like SN5, SN6 was taken back to the build site for storage.

After the twin test flights, SpaceX considered what to do with SN5 and SN6. One option was to refly them to test Starship’s reusability and conduct quicker launch campaigns. However, SpaceX decided against this and retired the vehicles. 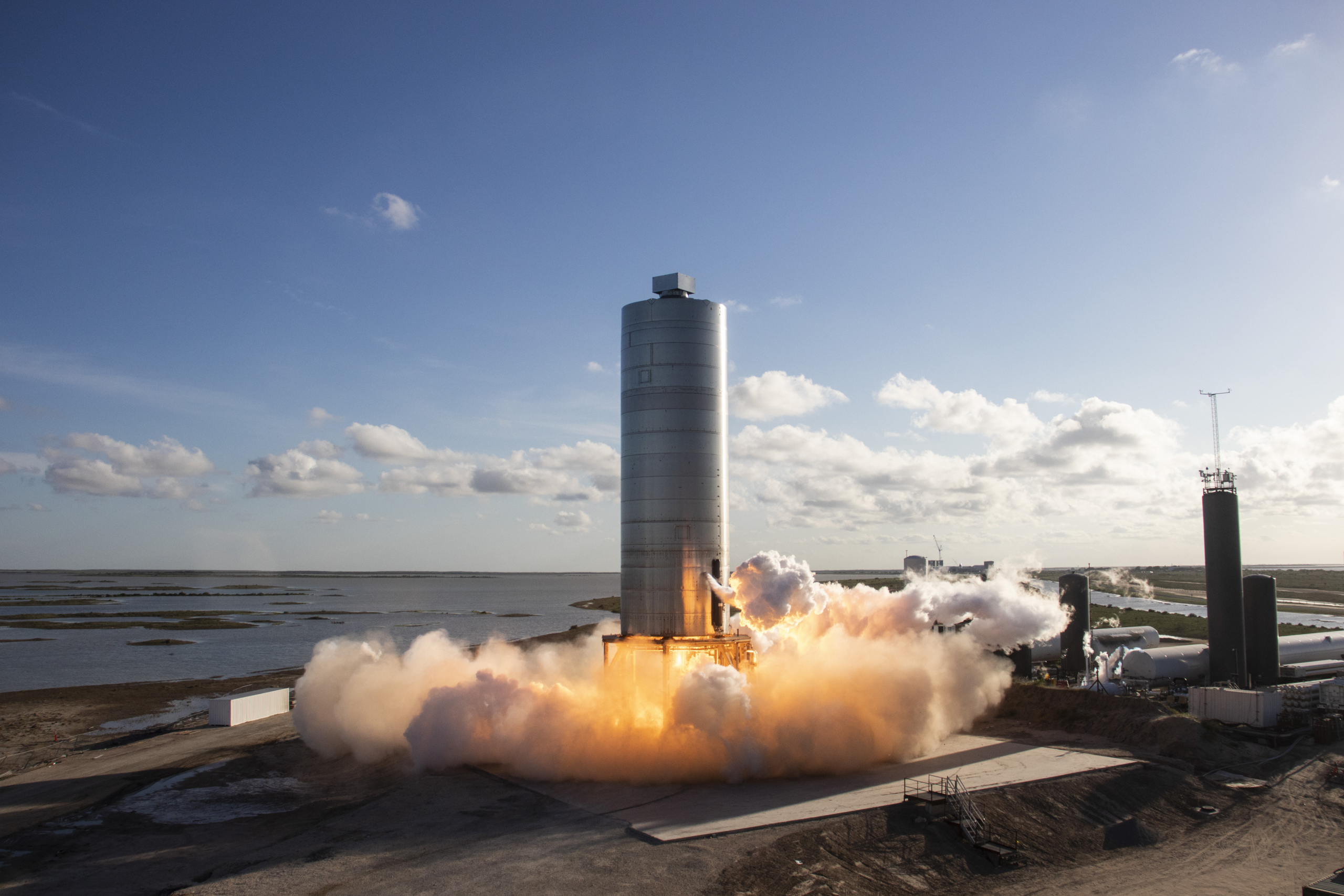 SN6 was shortly followed by the SN7.1 test tank. SN7.1 was the second test tank based on 304L Stainless Steel. SN7 was the first 304L test tank; it completed two tests in June 2020. SN7.1’s objective was to test new manufacturing techniques.

On September 8, SN7.1 rolled out from the build site and was taken to Suborbital Pad B where it conducted a cryoproof test. After completing the test, it was taken to a test tank stand for two more cryo tests on September 14 and 15.

On September 23, SN7.1 was loaded up with cryogenic nitrogen as normal and began to pressurize itself to failure. SN7.1 burst after reaching 9 bar at the base and 8 bar in the ullage. SN7.1 remained on the Test Tank Stand until October 4, when it was scrapped.

The success of SN7 and SN7.1 led SpaceX to move forward with using 304L stainless steel instead of the 301 steel used on SN6 and before.

Starship SN8 conducted a cryogenic proof test without its nose cone on October 6. The first test, however, failed because of a leak during the test, as was later confirmed by Musk on Twitter. After a day of repair, SpaceX redid the test on October 7 in another late night cryo test which failed due to an unknown reason and had to be redone the next day.

This time, the cryoproof test was completed, which enabled SpaceX to move the vehicle to the next step of the pre-flight campaign, which included a preburner and static fire test of its three engines: Raptor engines 30, 32, and 39.

After the static fire, Raptor 39 was replaced by Raptor 36 and SpaceX installed the nosecone of the vehicle. SpaceX then moved into a second cryoproof campaign to make sure the LOX header tank in the nose cone operated as intended. The LOX header tank is used to provide liquid oxygen for the belly flop and landing maneuver.

The first test of the header tank was conducted on November 4. A week later, SpaceX used the LOX header tank to perform a single-engine static fire.

Up until this point, the test campaign of Starship SN8 encountered only minor issues; however, that changed with the third static fire campaign, a repeat of the LOX header tank static fire, this time using all three Raptors.

On November 12, at 7:14 pm CST, the three Raptor engines ignited. During the firing, one of the engines was damaged due to debris from the pad, resulting in a complete loss of vehicle pneumatics.

With this loss of control, the only thing SpaceX could do was wait for the burst disk in the header tank to blow. The pressure in the tanks increased because of the boiling LOX expanding inside them. At 8:36 PM local time, the burst disk finally blew, releasing a stream of liquid oxygen at the top of the vehicle. The vehicle suffered no other damage.

Raptor 32 was removed from SN8 after the test and was replaced by Raptor 42. After a few days of repairs and Raptor replacements, Raptor engines 30, 36, and 42 successfully performed a static fire on November 24, which opened up the way for the main event: the planned 12.5 km flight test of Starship SN8. 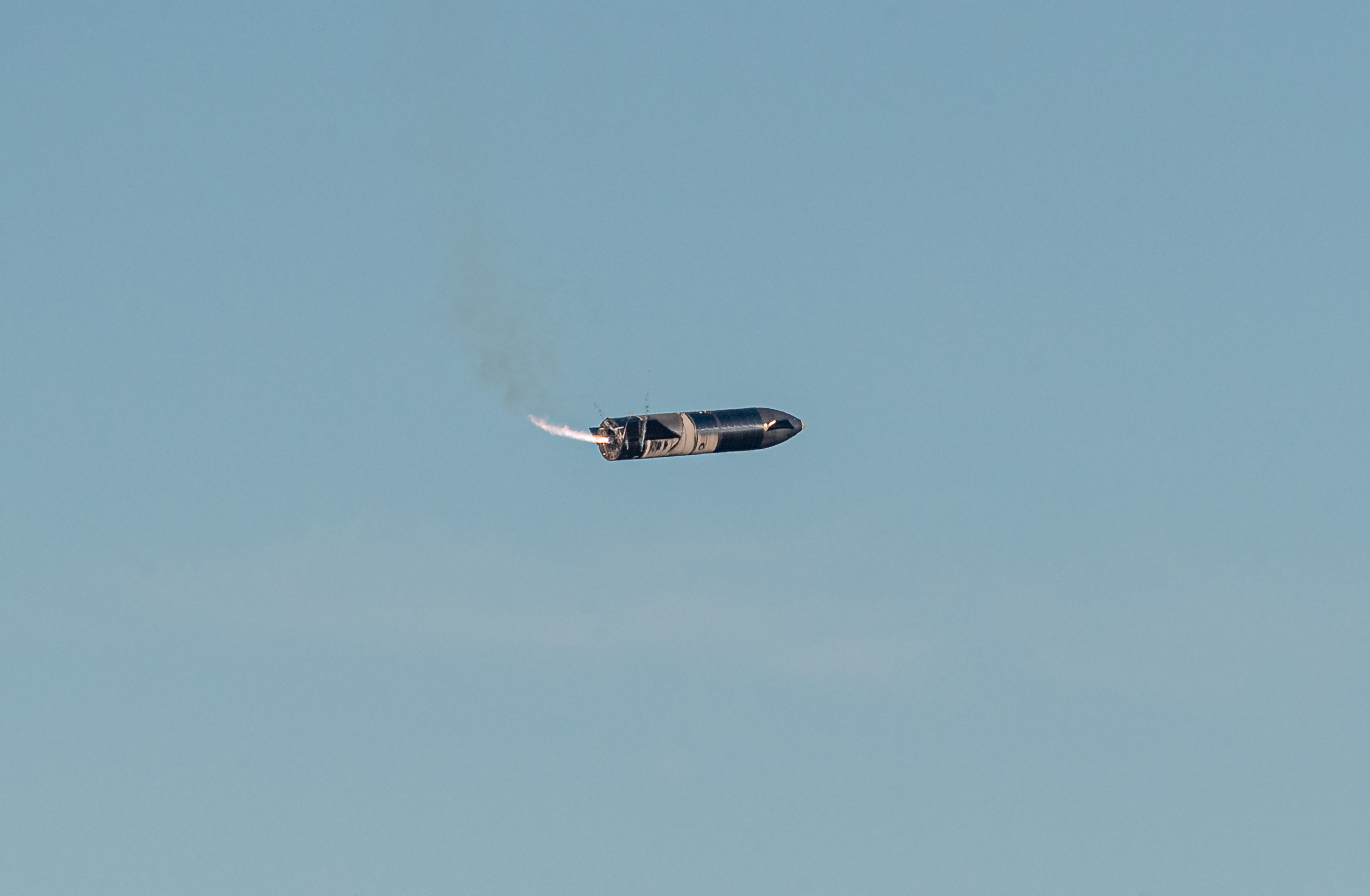 On December 9, 2020, Starship SN8 performed an ascent to 12.5 km, in which it shut down its Raptor engines one by one as designed, starting with the first one at T+01:41. Between the first and second shutdown, a small fire started in the engine bay but was quickly extinguished.

At T+03:13 the second engine stopped, leaving only one engine to burn for the rest of the climb. At T+04:40 the last engine shut down after initiating the belly flop maneuver. In this sequence, the vehicle used its aerodynamic flaps to steer itself back to the pad while reducing its vertical velocity. In the glide, the front and aft flaps both moved to guide the ship, while the Raptors waited for the final ignition, in which they would try to flip the vehicle from a horizontal position to a vertical position and land on the adjacent landing pad.

SN8 would use a 2-1 engine landing configuration, so one of the engines was shut down while a single one would landing the vehicle. During this, the LOX header tank lost pressure and could not feed the engine for the final landing burn as designed. The vehicle could not slow down enough and impacted the landing pad. The hard landing resulted in the loss of Starship SN8.

SpaceX concluded that the test was a full success, as it proved the Starship vehicle could perform an ascent, flip to body flap position and move to the landing pad.

Starship SN9 was the second of the full-scale Starship prototypes. While it came after the successful SN8 test campaign, SN9 would have a problematic history.

Once repairs were completed, SN9 rolled out to Pad B on December 22 with two Raptors already installed; a third Raptor was installed shortly after delivery. After a week at Pad B, SN9 completed its cryoproof test and began its static fire preparations.

Unfortunately, Starship SN9 is leaning in the high bay. @elonmusk will it buff right out?@NASASpaceflight pic.twitter.com/MUJD0piJwt

After a week, the second static fire was conducted on January 13. This time, this test was nominal. Just under two hours later, SN9 fired its engines for a second time. This static fire was also a success and SpaceX went ahead with a third static fire an hour later at approximately 3:37 pm CST, marking the first time three static fires had been conducted in the same campaign to help prove how many times Raptors can be ignited without any refurbishment.

Despite the three successful static fires, Elon Musk announced that two of the engines were categorized as “suspect” and were switched out. Raptor engines 44 and 46 were replaced by Raptor 45 and Raptor 48.

SpaceX attempted another static fire for the new Raptors on January 20, 2021, but both attempts aborted minutes before engine ignition. On January 21, SN9 attempted its fifth static fire, but right at ignition, the static fire was aborted and not completed. After a quick inspection of the Raptor engines, on January 22, just before 9 am CST, SN9 fired its engines for the sixth time. This time it was the full duration.

With the static fires complete, SpaceX was ready for a test flight of SN9; however, when SN8 launched, it did so without FAA approval. This caused the FAA to investigate SpaceX and led to the FAA’s approval for SN9’s flight being delayed.

On January 25, 28, and 29, SN9 conducted flight attempts but was scrubbed due to the lack of FAA approval and high winds. During this time, SN7.2 conducted a cryo-proof test on January 26.

Just after the SN9 flight scrub on January 29, SpaceX took the opportunity to roll out Starship SN10 to Pad A and placed it on the launch stand. This was the first time two Starships were on the launch pads at the same time. 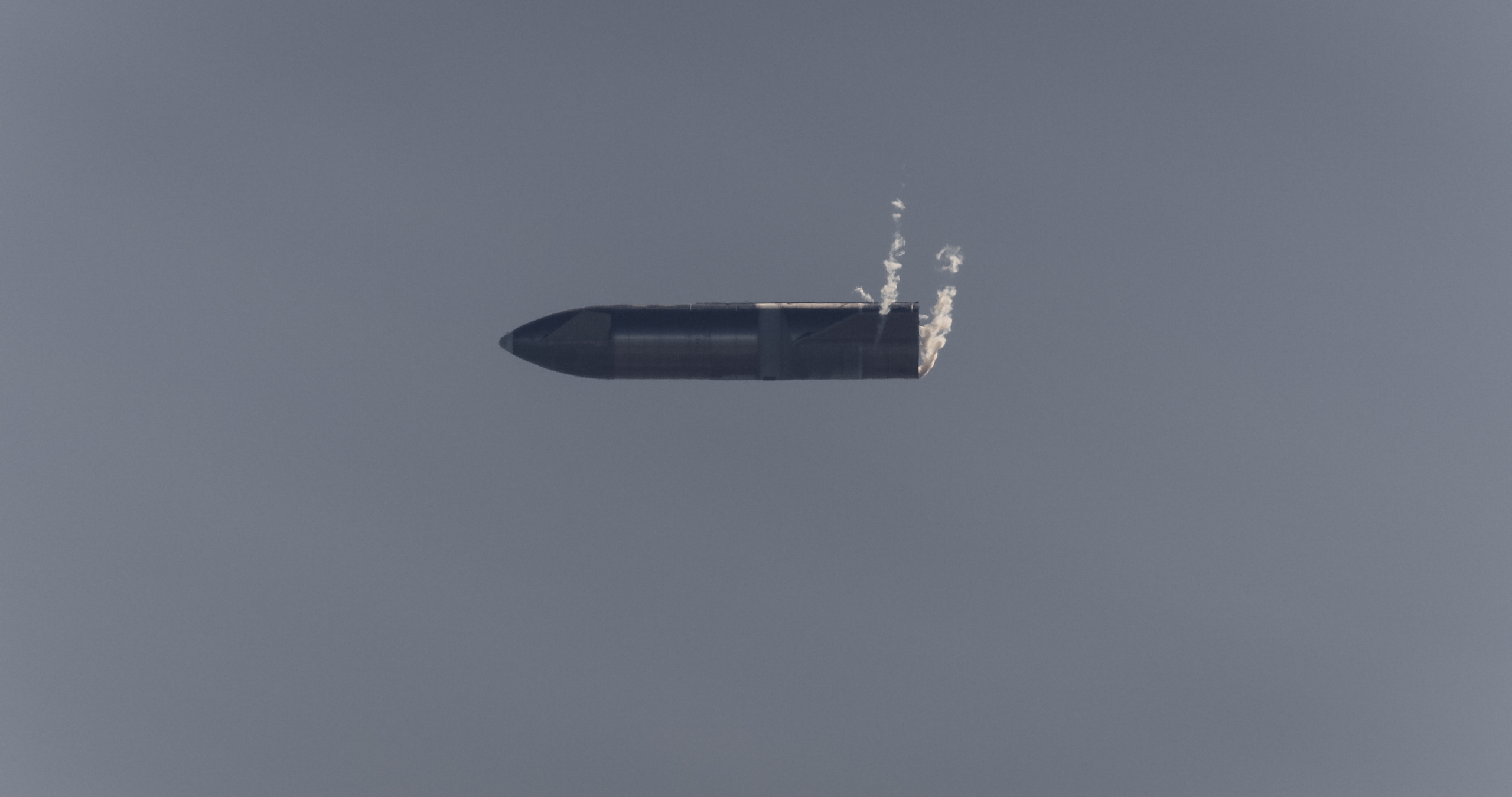 On February 2, 2021, at 2:25 pm CST, SN9 lifted off to its 10-km flight test. The test proceeded as planned through Engine number 3 relight to begin the flip maneuver. At this time, engine number 2 failed to relight, and SN9 flipped over and crashed into the landing pad.

While SN9 failed to land, the test was successful in replicating most of SN8’s flight, proving SN8 was not a fluke. The flight also proved the temporary solution of using helium to help keep the methane header tank pressurized.

Just after SN9’s flight, SN7.2 conducted its final test before being retired. The SN7.2 tank tested the new 3mm thick stainless steel instead of the 4mm thick steel used previously. The 3mm steel will allow the dry mass of Starship to be reduced by 25%.

SN10 was the first vehicle to use a new and improved landing burn ignition sequence to ignite all three engines instead of two and then shut down the engine with the least lever arm if not needed for the landing burn.

Starship SN10 started its test campaign on February 8 with a cryogenic proof test of the tank structure. At this point, the vehicle was fully built with aero-flaps installed.

The first static fire was performed on February 23 with all three of the installed Raptor engines. A second static fire occurred just two days later, showcasing the remarkable pace of SpaceX by replacing and integrating new engines in a short period.

On March 3, SpaceX conducted its first flight attempt to 10km. The attempt was aborted at engine ignition due to unexpected thrust levels. A second attempt was planned for the same day, and SpaceX increased the tolerance for engine thrust.