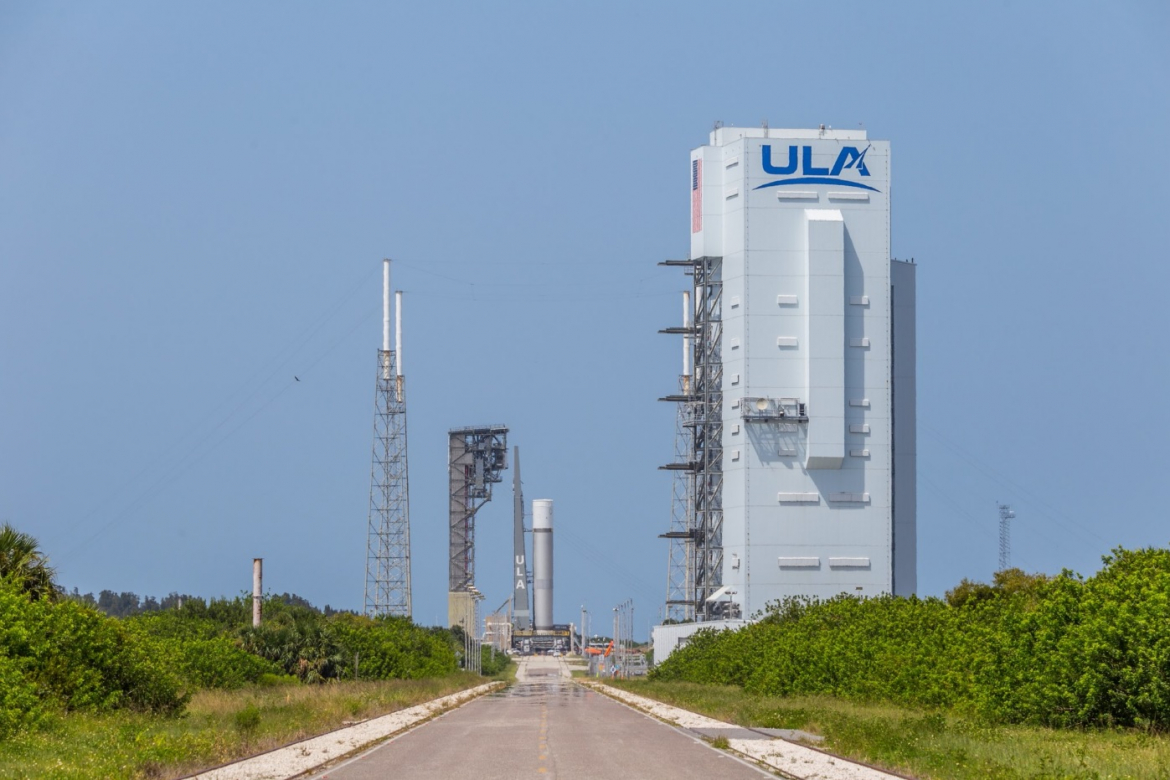 United Launch Alliance’s Vulcan pathfinder has rolled out to SLC-41 at Cape Canaveral for tank testing as part of a continuing campaign towards the rocket’s maiden flight. While this booster will not be the first to fly, it will have its pathfinder BE-4 engines replaced with flight engines once testing is complete in order to support a future Vulcan launch.

The booster that is taking part in this testing arrived in Florida on ULA’s RocketShip in February 2021 and was rolled to the Vertical Integration Facility (VIF), where teams stacked the vehicle on the mobile launcher, after which ULA performed preliminary testing with Vulcan, and its launch pad when they first rolled it out in March 2021.

Currently, ULA has this one flight-ready booster with development BE-4 engines at the cape. This booster will be swapped out for another, which has the first flight engines, and will conduct a static fire test at SLC-41, after which they will integrate their first payload and roll out for Vulcan’s first flight.

I spy with my little eye… An advanced Centaur V tank nearing completion in our new robotic weld center at the rocket factory in Decatur, AL. #CountdownToVulcan pic.twitter.com/p4VmxK2PB2

ULA is in the process of building the flight hardware for the first few Vulcan launches. CEO Tory Bruno recently shared a photo of an advanced Centaur V tank nearing completion in their new robotic weld center at their rocket factory in Decatur, Alabama.

The first flight of Vulcan will be an operational launch with a commercial customer. Astrobotic selected ULA and Vulcan to launch their robotic Peregrine moon lander, a scientific mission as part of NASA’s Commercial Lunar Payload Services (CLPS) program.

That launch was originally scheduled to launch in 2021 but has been delayed for a few reasons.  First is the readiness of Astrobotic’s spacecraft, which is not yet prepared for flight.

Second, ULA has yet to receive flight-qualified BE-4 engines from Blue Origin.  Bruno recently stated that engine readiness will pace the availability of the rocket but that the pacing item for the first flight remains payload readiness.

Bruno had said recently at the 2021 Space Symposium that he does not expect to receive the BE-4 flight engines before the end of the year.

Bruno has recently been a little sharper in his public words when talking about the BE-4 engine delay, saying, “I need them to diligently work through the plans we have and get done on time.”

Bruno also responded to this on Twitter by saying that he does expect the engines before the end of the year and that the engine is currently performing well and is in pre-qualification testing, the flight engines have begun fabrication.  And he expects to have the rocket ready before the payload.

He has also said that ULA has “been able to accommodate” the delay, “but I’ll be straight with you, the dates we’ve set up for them now, we really don’t have the ability to make any big moves after this.”

When asked on Twitter if the current schedule for BE-4 is still faster than if ULA designed an engine in-house Tory’s answer was just “Yes.”

I expect engines before the end of the year. If there are any unforeseen challenges, they could move past that. At present, the engine is performing well and is in prequal testing. Flight engines have begun fabrication. I expect the have the rocket ready ahead of the payload

Some of the other payloads for Vulcan have either moved to Atlas V or had delays of their own. For example, back in May of this year, USSF-51 was moved to Atlas V by request of ULA because Vulcan is not going to be ready to launch it on time.  This change will financially hurt ULA as Atlas V is more expensive than Vulcan, but this change allows for the first two Vulcan launches to launch when they are ready and not push back USSF-51.

One of the main payloads for Vulcan is Sierra Nevada’s Dream Chaser, which will be used to deliver cargo to the ISS.  And it has had delays of its own, mostly due to Covid-19. Back in January of 2021, it was announced that the test flight would be pushed to 2022.  But with the delays from Vulcan not having its flight engines ready and Covid-19 and other delays for Dream Chaser, it may not launch until early 2023.  After the Demo flight, there are a total of 6 launches for Dream Chaser under the current contract.

Other than those two payloads, Vulcan is set to launch at least 3 other National security payloads for the Space Force, they are USSF-112, USSF-106, and USSF-87, all of which are currently slated to launch in 2023.  Tory has said that they have over 30 missions total that are going to launch on Vulcan.