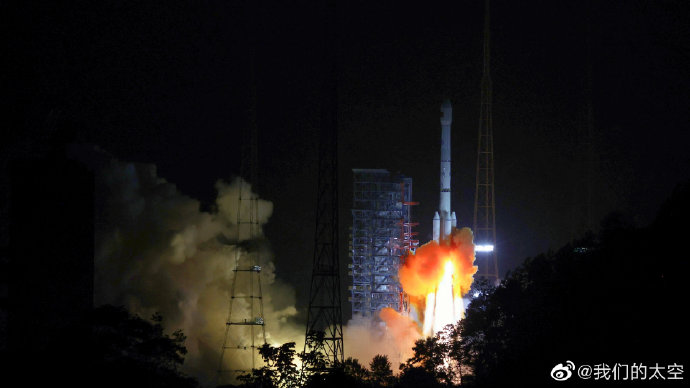 Thursday marked another successful mission in China’s busy 2021 launch manifest, this time lofting the Zhongxing-9B (ChinaSat-9B) into orbit on a Long March 3B from the Xichang Satellite Launch Center. This satellite serves as a replacement to the Zhongxing-9A, launched in 2017 but inserted into a lower than planned orbit, and thus its operational life reduced.

The nature of both satellites is for communications, specifically related to radio and television broadcasting. Built by the China Aerospace Science and Technology Corporation (CASC) and operated by China Satcom, they are based upon the DFH-4 satellite bus and equipped with Ku-band antennas. The satellite is expected to allow 8K broadcasting of the 2022 Beijing Winter Olympics.

Zhongxing-9B was successfully inserted into Geostationary Transfer Orbit, where it will use its own propulsion to leave this transfer orbit and begin its planned 15-year mission.

Thursday’s mission came in the wake of predecessor Zhongxing-9A, which launched from Xichang on June 18, 2017, also by a Long March 3B.

While the launch was successful, an issue arose in the latter stages of flight. After nominally going through stages one and two, stage three completed its first burn and went into a coast phase. However, a failure relating to the stage’s Reaction Control System (RCS) thrusters meant there was no roll control during the coast, and thus when the second burn occurred, the stage and attached ChinaSat-9A were not in the proper attitude.

Orbit was attained, but short of the mission-intended parameters needed for Geostationary Transfer Orbit (GTO).

As with all GTO-inserted satellites, they are equipped with their own onboard propulsion to circularize from the transfer orbit, as well as the usual attitude control. Therefore, Zhongxing-9A had to use its propellant to compensate for the third stage and circularize into Geostationary Orbit like usual.

What resulted was the satellite depleting a significant amount of its propellant through ten burns, and thus reducing its planned 15-year lifespan by more than two-thirds.

ChinaSat-9A did reach Geostationary Orbit approximately two weeks after launch and operated nominally for the time its propellant residuals could allow. However, it is believed the spacecraft depleted all of its propellant around February 2021 with a cease to stationkeeping.

On ZX-9A: It has drifted off station but no sign of a graveyard manuever, at least so far. pic.twitter.com/SSWv1TJhOl

Its replacement, Zhongxing-9B, successfully attained the proper Geostationary Transfer Orbit following spacecraft separation on Thursday. The satellite is reported to be healthy and will begin to circularize its orbit in the coming weeks.

Final integration of Thursday’s Long March 3B was seen as early as August 30 at Launch Complex 2 of the Xichang Satellite Launch Center. Situated in southwestern China, the launch facility has been active since 1984 with its two operational launch complexes, hosting Long March 2 and 3 vehicles specializing in Geostationary-bound missions.

The launcher soared into the skies at 7:50 PM local time (11:50 UTC) under the collective power of eight engines from the first stage and boosters.

As shown by a Notice to Airmen (NOTAM), the vehicle’s trajectory was predominantly eastwards, intuitively similar to other GTO-bound NOTAMs from Xichang (XSLC). Additionally, the three hazard zones for boosters, first stage, and second stage reentry could also be seen, with the boosters and first stage expected to fall onto land. 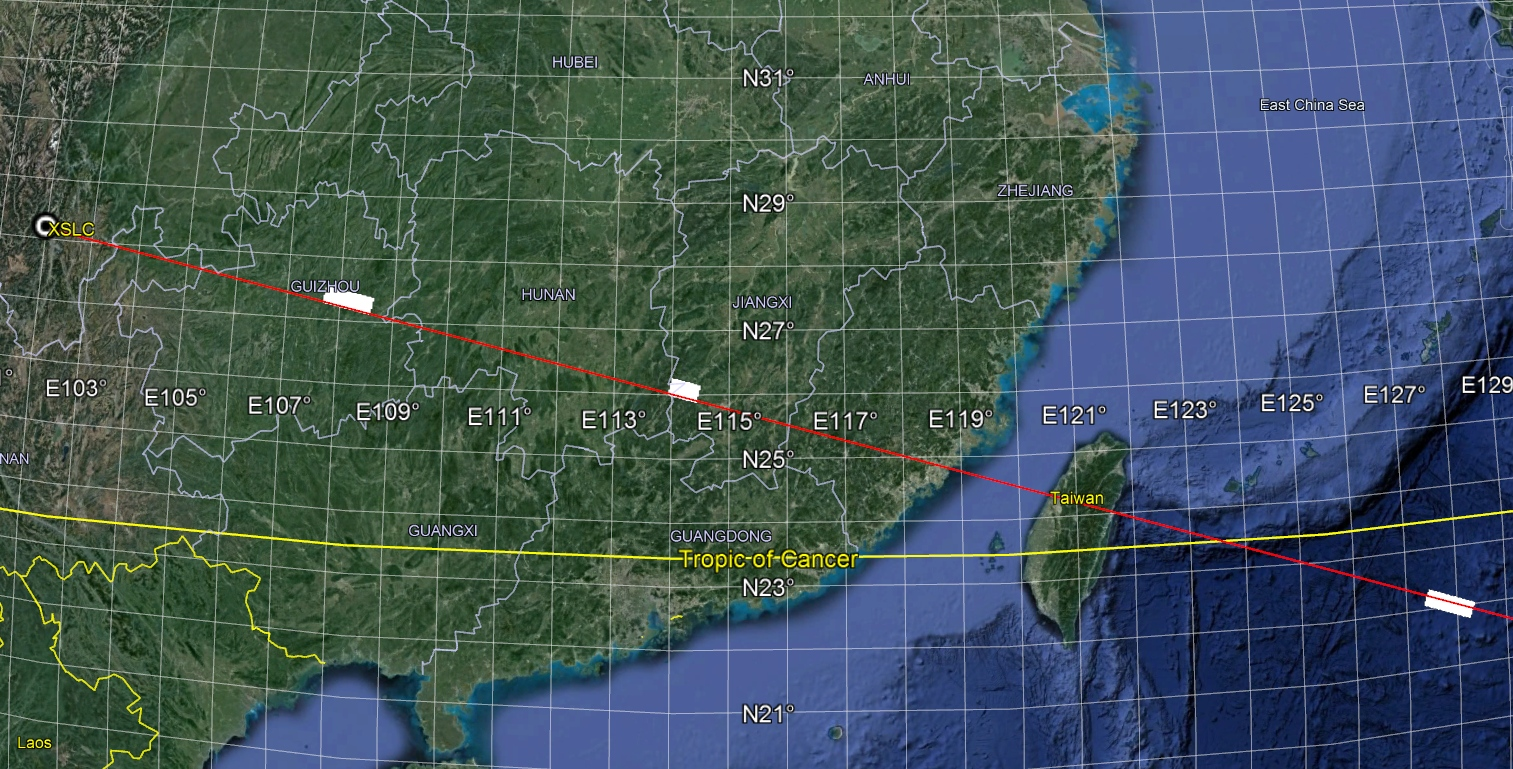 The launch trajectory and drop zones for the boosters, first, and second stages

Chang Zheng 3B, known as Long March 3B internationally, is a medium-lift launch vehicle manufactured by the China Academy of Launch Vehicle Technology. Liquid-fuelled, it comprises of three stages (with an optional fourth), including four strap-on boosters with the first stage, amounting to an 11,200 kg lifting capability to Low Earth Orbit and 5,100 kg to Geostationary Transfer Orbit. 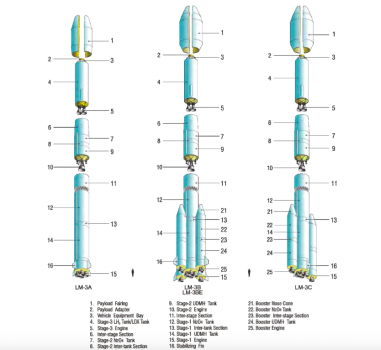 Both the 3B and 3C variants have undergone even further development, designated as being ‘enhanced’ and reflected as such by Long March 3B/E and Long March 3C/E, respectively. Such development involved stretching the length of the strap-on boosters and first stage, leading to longer-duration burn times in the aforementioned components and an increased payload capacity over the base variants.

Thursday’s CZ-3B/E has the capability to loft up to 5,500 kg to Geostationary Transfer Orbit, with Zhongxing-9B’s payload mass believed to have been between 5,100 and 5,500 kg.

The majority of the Long March 3’s stages use hypergolic propellants, specifically unsymmetrical dimethylhydrazine (UDMH) and nitrogen tetroxide (N2O4), both of which provide easy combustion but are toxic. In addition, the four strap-on boosters each use the YF-25 engine.

Using the standard flight timeline of a CZ-3B GTO mission, these are jettisoned at approximately T+ 2 minutes and 8 seconds from the first stage. Meanwhile, the first stage and its four YF-21 engines, also utilizing the same hypergolic propellants, burns until 2 minutes and 25 seconds before second stage separation.

The second, another hypergolic stage, ignites its single YF-22E main engine to burn until T+ 5 minutes and 26 seconds, with the stage’s YF-23 Vernier engine shutting down 15 seconds later. Fairing separation occurs approximately three and a half minutes into the flight.

After the second stage shuts down and separates, the third stage ignites its two YF-75 engines fueled by liquid hydrogen and liquid oxygen, the only cryogenic stage of the vehicle. This stage burns for approximately 4 minutes and 44 seconds in order to reach near-orbital parameters.

A second burn to raise the perigee is initiated at around T+ 21 minutes following a coast phase. As well as performing an orbital insertion, this 179-second burn then significantly raises the apogee to the parameters needed for a Geostationary Transfer.

ChinaSat-9B’s launch marked the tenth from Xichang Satellite Launch Center this year, with the previous mission being only 16 days ago from another launch pad. China continues to fulfill its increasingly busy launch manifest, with the prospect of more payloads for launching with the country’s rise of a private aerospace sector.