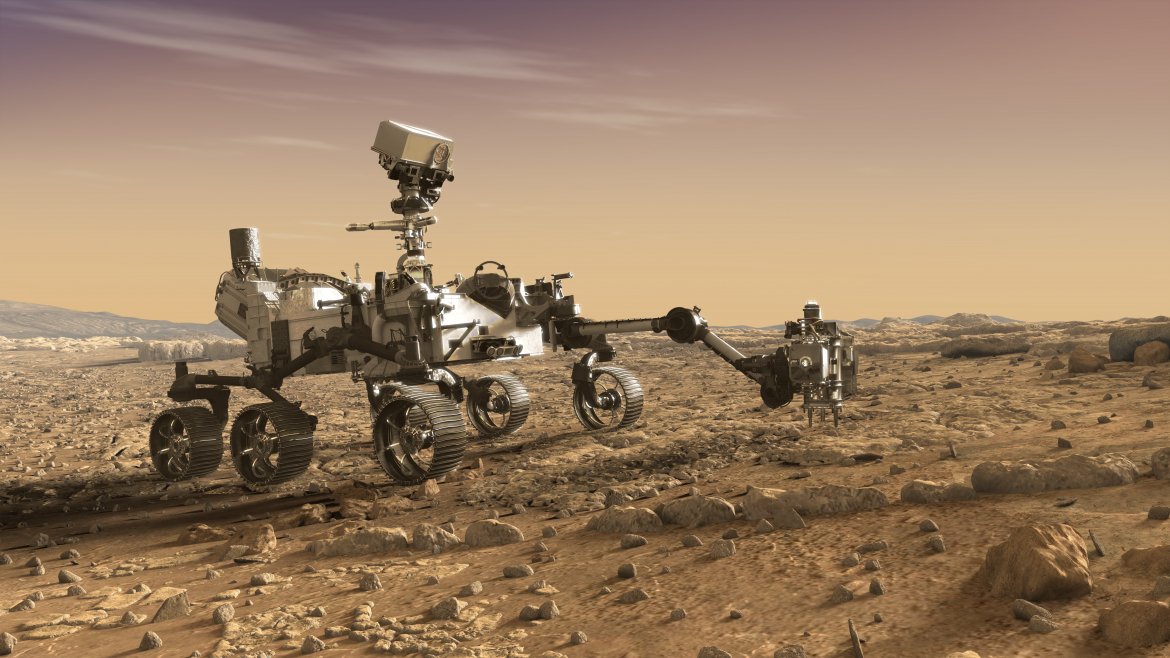 Additionally, new data from the samples show that the rock collected is likely volcanic and may contain bubbles of ancient water.

In early August, Perseverance attempted to collect a sample from a rock located at the “Cratered Floor Fractured Rough” area in Jezero Crater. The rover successfully drilled a hole into the ground, but upon inspection of the sample tube, no surface sample was found.

Scientists and rover engineers studied the issue, concluding there was no sample in the tube due to the rock being too “crumbly” and breaking into pieces too small to stay inside the sample tube.

After the first sample attempt, Perseverance drove 455 meters to a ridge named Citadelle, a capped-off layer of rock that seems to resist wind erosion — indicating that Citadelle was likely to hold up during a sampling attempt.

Once the rover was at Citadelle, Perseverance teams scouted the area for a rock that appeared suitable for sampling. They settled on a rock named Rochette. 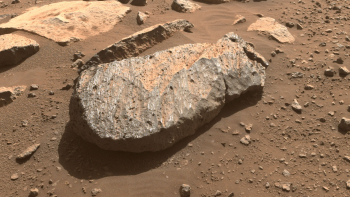 Image of Rochette taken by Perseverance prior to being sampled. (Credit: NASA/JPL-Caltech

After extensive examination, the rover abraded the rock to allow teams to see if Rochette would hold up during a sampling attempt. Rochette did indeed hold up well during the test, and scientists proceeded with the sampling process.

Perseverance drilled into Rochette on September 1, 2021, and simultaneously attempted to collect a sample. After drilling, rover teams needed to inspect the drill bit and sample tube to ensure material had been collected.

Initial images sent back from Perseverance showed a sample in the tube; however, poor lighting prevented teams from confirming this. The Mastcam-Z instrument atop Perseverance’s mast is responsible for acquiring images of the drill bit and sample tube following a sampling attempt.

After completing the procedure, Perseverance once again began acquiring imagery of the drill bit and sampling system.

I’ve got it! With better lighting down the sample tube, you can see the rock core I collected is still in there. Up next, I’ll process this sample and seal the tube. #SamplingMars

However, like before, poor lighting prevented scientists from confirming the sample was still present inside the tube.

Better imagery of the tube with improved lighting conditions was acquired on September 3 and sent to Earth the next day, confirming that the sample was still inside the tube.

Perseverance then began the process of storing the sample.

At 04:34 UTC on September 6, the rover transferred the sample tube, officially cataloged as Sample Tube 266, into its interior. Once inside the rover, the sample was measured, imaged, sealed, and then stored.

Upon completion of the entire sampling process, the first successful Martian surface drill site and the sample was given the name Montdenier.

Perseverance teams then began preparing the rover for its third sample attempt which saw Perseverance sample the same rock as before — Rochette. 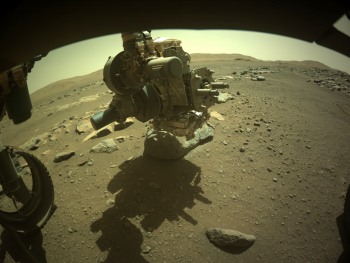 With this sample attempt, the rover team attempted to complete the entire sampling process without pausing, as they had during the first and second sample collection attempts.

On September 8, 2021, NASA and Perseverance teams confirmed the successful collection, processing, and storing of the second Martian surface sample.

Composition of the samples

Analysis of the samples by Perseverance show they are basaltic in composition and were likely formed by lava flows in the planet’s past. Therefore, the samples from Rochette are likely volcanic.

Additionally, salts have been observed within volcanic rock on Mars, salts that could have formed from evaporating water or flowing groundwater that altered the original rock material. If indeed this is how these salts formed, minerals within the salt could have trapped microscopic bubbles of ancient Martian water. 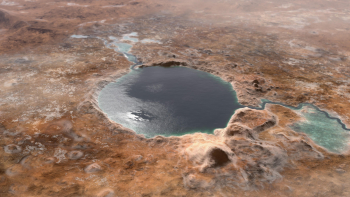 Illustration showing Jezero Crater as a lake in Mars’ past. (Credit: NASA/JPL-Caltech)

These bubbles could serve as time capsules of Mars’ ancient climate and potential habitability.

The crystalline materials present in volcanic rock are also extremely helpful to radiometric dating. This could allow scientists to determine when the rock formed. Furthermore, the rock in the first two successful samples will help scientists accurately calculate when Jezero Crater formed, when the crater’s lake appeared and disappeared, and when changes to the ancient Martian climate occurred.

And Jezero Crater’s lake has been the center of consideration for some time — specifically, how long it was present.

A popular theory holds that the lake formed when floodwaters rapidly filled the crater and then dried up within 50 years.

However, the level of alteration seen in Rochette and in the samples suggests that water was present in Jezero Crater for a long time — much longer than 50 years.

South Séítah, like Citadelle, is a series of ridges covered with sand dunes and filled with boulders and rock shards.

Interest in South Séítah is due to its older age than Citadelle. The two ages of the ridges will allow scientists to construct a geologic timeline of how Jezero Crater’s floor was shaped into what it is today.

The timing of this sample collection will have to work around an upcoming solar conjunction, when Earth and Mars pass on opposite sides of the Sun from each other, thereby preventing communication between the planets for several weeks. For this reason, Perseverance will likely wait and collect its next sample once spacecraft communications resume.

Perseverance’s sample attempts are part of the Mars Sample Return initiative of NASA and ESA. In the coming weeks, Perseverance will begin dropping sample tubes onto the crater floor in Jezero — leaving them behind for later collection as the rover continues exploring.

In 2026, if the current plan holds, another rover and a new lander, developed by NASA, will launch to Jezero Crater. After landing, the Sample Fetch Rover will drive around Jezero collecting the sample tubes left behind by Perseverance.

The rover will then return to the lander, where the samples will be loaded into a small capsule atop a rocket. The rocket will launch into Martian orbit, where an ESA-developed orbiter, also to launch in 2026, will rendezvous with it, take the sample return capsule, and bring the samples to Earth.