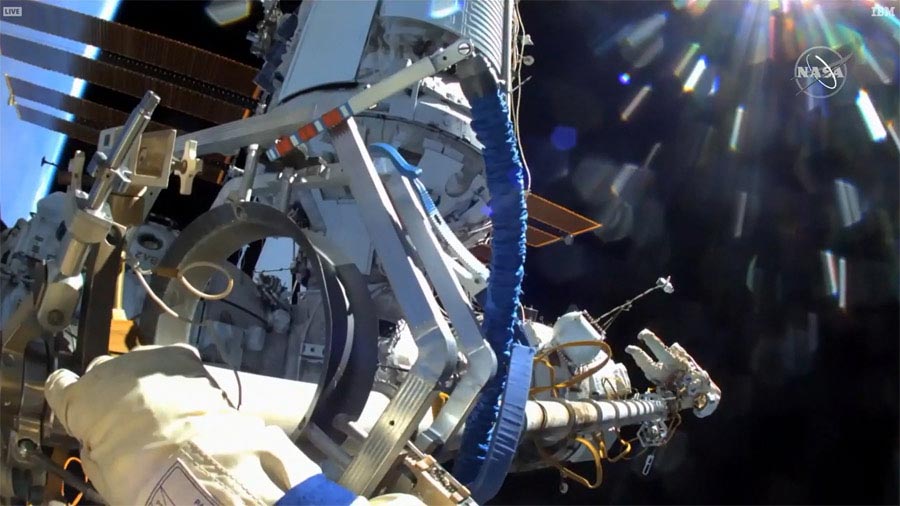 ISS Expedition 65 Flight Engineers Oleg Novitsky and Pytor Dubrov exited the International Space Station for Russian EVA-49 on Friday, the first in a series of up to 11 spacewalks planned to fully integrate the new Russian Nauka module onto the ISS.

Novitsky and Dubrov donned their Russian Orlan-MKS model spacesuits and exited from the station’s Poisk airlock module at 14:41 UTC / 10:41 EDT on September 3 for an approximately 7-hour spacewalk. Inside the station, they were assisted by NASA astronaut and Expedition 65 Flight Engineer Mark Vande Hei.

EVA-49 — the 242nd spacewalk in support of construction, outfitting, and maintenance of the ISS, the 12th EVA of the year (10 on ISS and 2 on the Chinese space station), and the 5th for Expedition 65 — specifically focused on attaching Nauka to the ISS’s power and ethernet systems.

Following years of delays, Nauka launched and autonomously docked with the ISS at the end of July. Since then, the crew aboard the station and ground crews in Russia have been working to outfit the new module and bring it into operation.

Friday’s excursion marked the second EVA for both Novitsky and Dubrov, who spent 7 hours 19 minutes outside the station in June tasked with decommissioning the Russian Pirs docking compartment that was undocked to make way for Nauka.

Once the two spacewalkers exited Poisk, their first task was to translate to one of the two Russian Strela EVA cranes mounted to the Russian segment and perform preparatory work on its end effector that would be needed later in the spacewalk.

After this, Dubrov translated down towards Nauka and began installing several cable clamps on the new module.

After Dubrov installed the new clamps, Novitsky began routing the power cables destined for Nauka down towards the module, connecting it with the station’s power supply.

Once the two completed the cable work, Dubrov attached himself to the end effector of the Strela crane, and Novitsky extended it — moving Dubrov out to PMA-1 (Pressurized Mating Adaptor -1), the node that connects the Russian segment of the ISS to the US segment.

Novitsky then translated down the Strela boom to meet up with Dubrov at PMA-1. 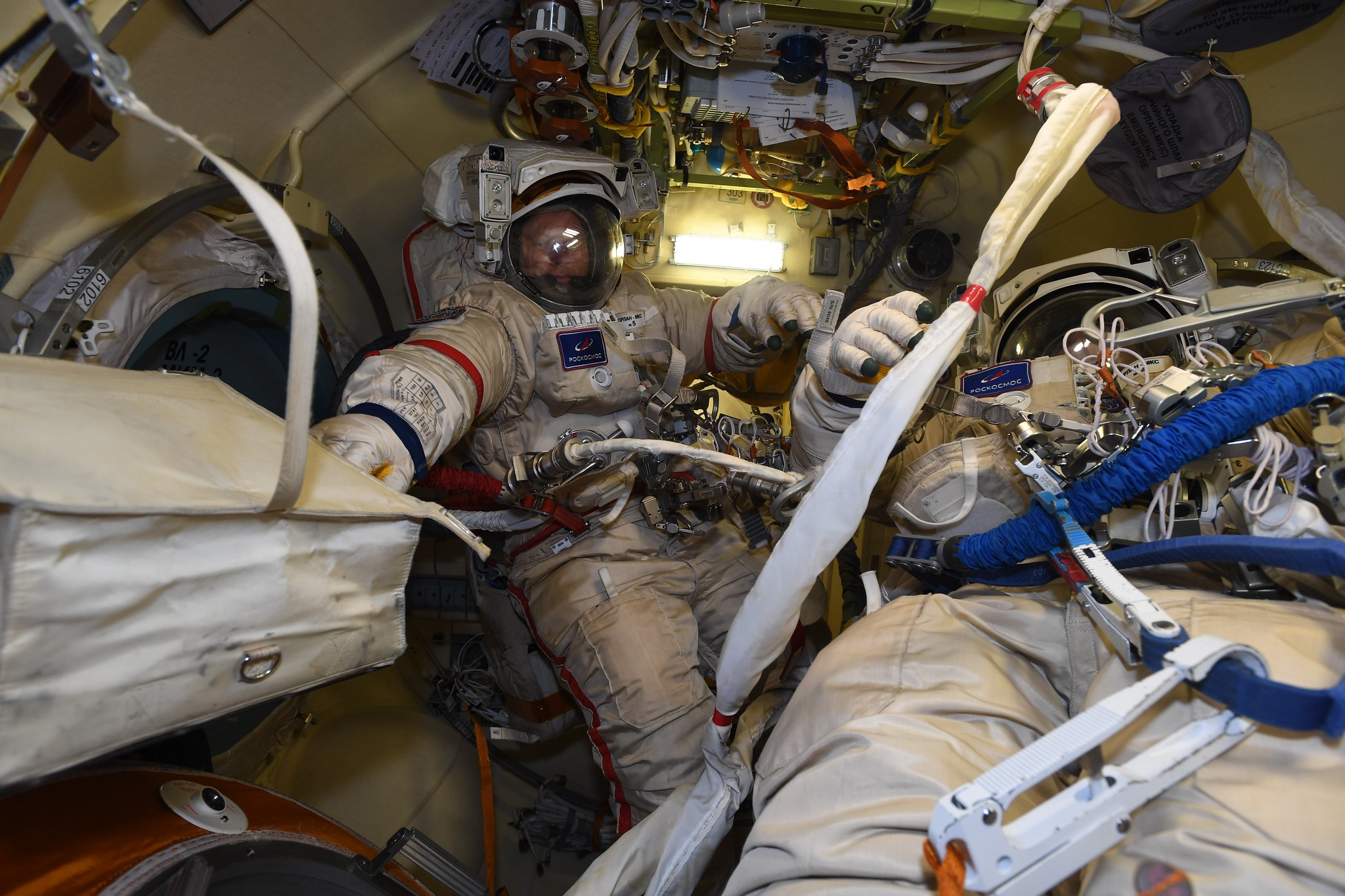 From here, the two began work connecting Nauka into the US segment’s power system and connecting Nauka’s ethernet cables. All ground checkouts of the connections were successfully completed, with a good power path from two power cable bundles from the US-segment to the Nauka module verified.

Despite the excellent work, tasks and checkouts took longer than planned — which is somewhat expected on spacewalks. Behind the preplanned timeline, Russian controllers decided that storing the Strela crane and attaching one of three handrails would be the final tasks for the EVA and that Novitsky and Dubrov would forgo the installation of three Biorisk experiments, mating of an ethernet cable, jettisoning of an ethernet cable reel, and a photo survey.

The three Biorisk-MSN experiment canisters were to be placed outside of Poisk to observe how microorganisms fare when exposed to the vacuum of space. They will now be deployed on a future spacewalk.

EVA-49 marked the beginning of an intense period of spacewalks for the Expedition 65 crew, with Novitsky and Dubrov scheduled to exit the station again on September 9 for Russian EVA-50 to continue work on Nauka.

JAXA astronaut and Expedition 65 Commander Akihiko Hoshide, joined by French ESA astronaut Thomas Pesquet, will exit the station for US EVA-77, which will see the two prepare the ISS for installation of its third new iROSA solar array. 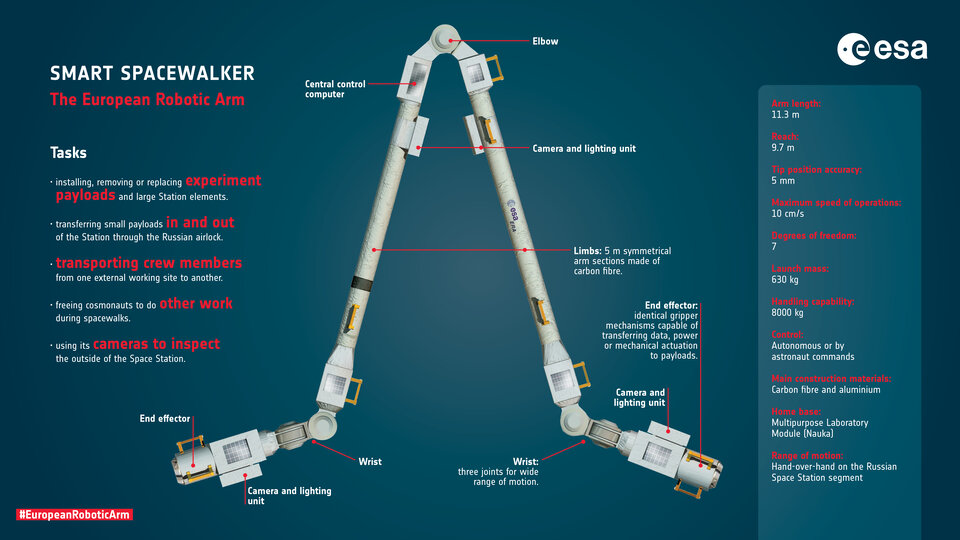 Diagram showing the important components of the ERA. (Credit: ESA)

EVA-77 will also, interestingly, mark the first “American EVA” carried out without any American astronauts.

In the following months, up to nine more Russian spacewalks are planned to fully integrate Nauka and the ISS. One of those tasks will be to activate the European Space Agency-built European Robotic Arm (ERA) manipulator system that was launched to space with Nauka in July.

Furthermore, German ESA astronaut Matthias Maurer, set to launch to the station aboard the upcoming SpaceX Crew-3 mission no earlier than October 31, will participate in at least one of the ERA spacewalks.

This will mark the first time a non-Russian cosmonaut takes part in a Russian EVA since Expedition 20 in 2009.

(Feature image: Novitsky working at the end of the Strela crane during his and Dubrov’s June 2021 spacewalk in June. Credit: Roscosmos/NASA)