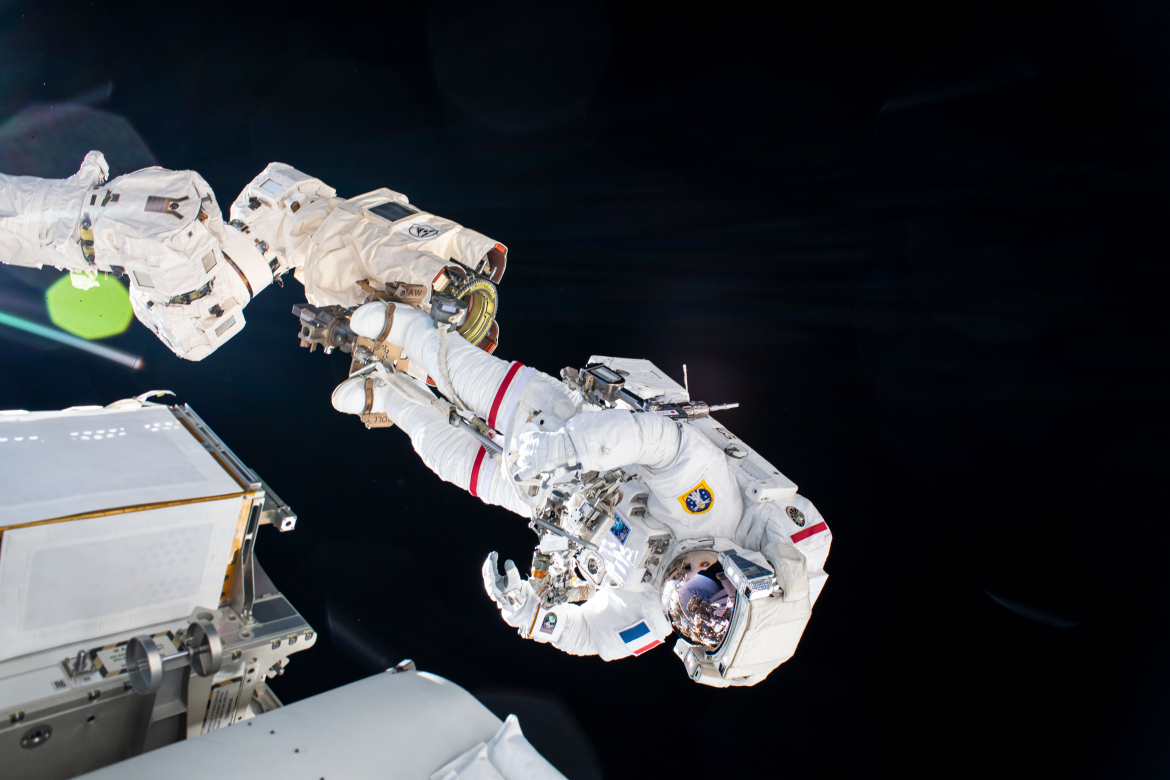 Two astronauts aboard the International Space Station (ISS) have completed a 6 hour 54 minute spacewalk to continue the process of outfitting the orbiting laboratory with new sets of solar arrays.

US EVA-77 — the first US spacewalk to not involve an American — saw Japan Aerospace Exploration Agency (JAXA) astronaut and current ISS Commander Aki Hoshide and European Space Agency (ESA) astronaut Thomas Pesquet build a support bracket onto which a future solar array will be mounted.

The ISS’s Solar Array Wings (SAWs) produce all the electrical power required by the station.

The first SAW, on the P6 truss, was launched on December 1, 2000 (UTC) on the STS-97 mission of the Space Shuttle Endeavour. In the intervening 21 years, expected degradation of the arrays means they produce less power than they did when they were first deployed.

The decreasing power ability of the arrays came against a backdrop of increasing demand from the station’s ever-increasing user base.

With a complete removal & replacement of the arrays not possible due to ISS construction and integration, the ISS Power Augmentation program was formed to find a way to boost the station’s power output.

The program arrived at a plan to add six additional solar arrays, called ISS Roll Out Solar Arrays (IROSAs), to the station to increase its power generation capability and bring it back near its original levels.

The IROSA is a new type of array technology for the station. Whereas the outpost’s original arrays deployed in an accordion-like manner, the IROSAs roll out in a mat-like fashion from inside a cylindrical canister.

Their solar cells are mounted on a thin flexible blanket rather than traditional rigid panels, and they feature a composite boom that adds rigidity and allows for deployment without the use of motors or complex mechanisms.

This allows the large arrays to be compactly stowed — which is important given the current launch vehicle options available to the ISS program.

The solar cells themselves are around 30% efficient compared to the 14% efficiency of the original arrays. This allows the IROSAs to generate roughly the same power as the originals despite being only half their size.

International @Space_Station 360 part 4️⃣: The Quest airlock is the smallest of the modules, but we should be spending hours in it tomorrow, before and after our spacewalk! 👨‍🚀 Full video on Facebook with subtitles: https://t.co/mqCaNgLKF4 pic.twitter.com/O34bzNZr8V

The IROSAs are being installed on top of six of the station’s existing solar arrays, which will allow the IROSAs to utilize the existing sun-tracking motors of the current arrays and allow each IROSA to be connected to the electrical system currently used.

Although the IROSAs will partly shadow the existing arrays, the originals will continue to generate power alongside the IROSAs.

Each IROSA will produce 20kW of power for a total of 120kW across all six arrays. When added to the output of the original arrays, a combined total of 215kW of power will be available to the ISS, close to its original level.

This represents an increase of nearly a third compared to the outpost’s current 160kW of available power and will ensure the ISS has adequate power to support its increasing demands throughout the remainder of its life.

Two IROSAs are already installed on channels 2B and 4B on the P6 truss, having been launched on a pallet inside a SpaceX Cargo Dragon 2 trunk on the CRS-22 flight in June 2021 and installed via a series of spacewalks.

US EVA-77 officially began at 08:15 EDT (12:15 UTC) on September 12 when Aki and Thomas took their Extravehicular Mobility Units (EMUs, or spacesuits) to battery power.

Each IROSA is structurally mounted to the base of the station’s existing Mast Canister Assemblies (MCAs), which housed the current arrays during launch and now serve as their base.

To provide a structural framework to mount the IROSAs to the MCAs, a mod kit must first be installed. This kit consists of several struts which are connected and bolted to an MCA using existing attachment points.

For EVA-77, a mod kit was assembled and installed onto the channel 4A MCA located on the P4 truss.

The first task for Aki Hoshide (suit with red stripes) and Thomas Pesquet (full white suit) was to translate out to the P4 truss worksite, whereupon they installed an A-frame like device called the upper bracket onto the 4A MCA.

This was the same procedure used on previous spacewalks earlier this year to install mod kits onto the 2B and 4B MCAs on the P6 truss. 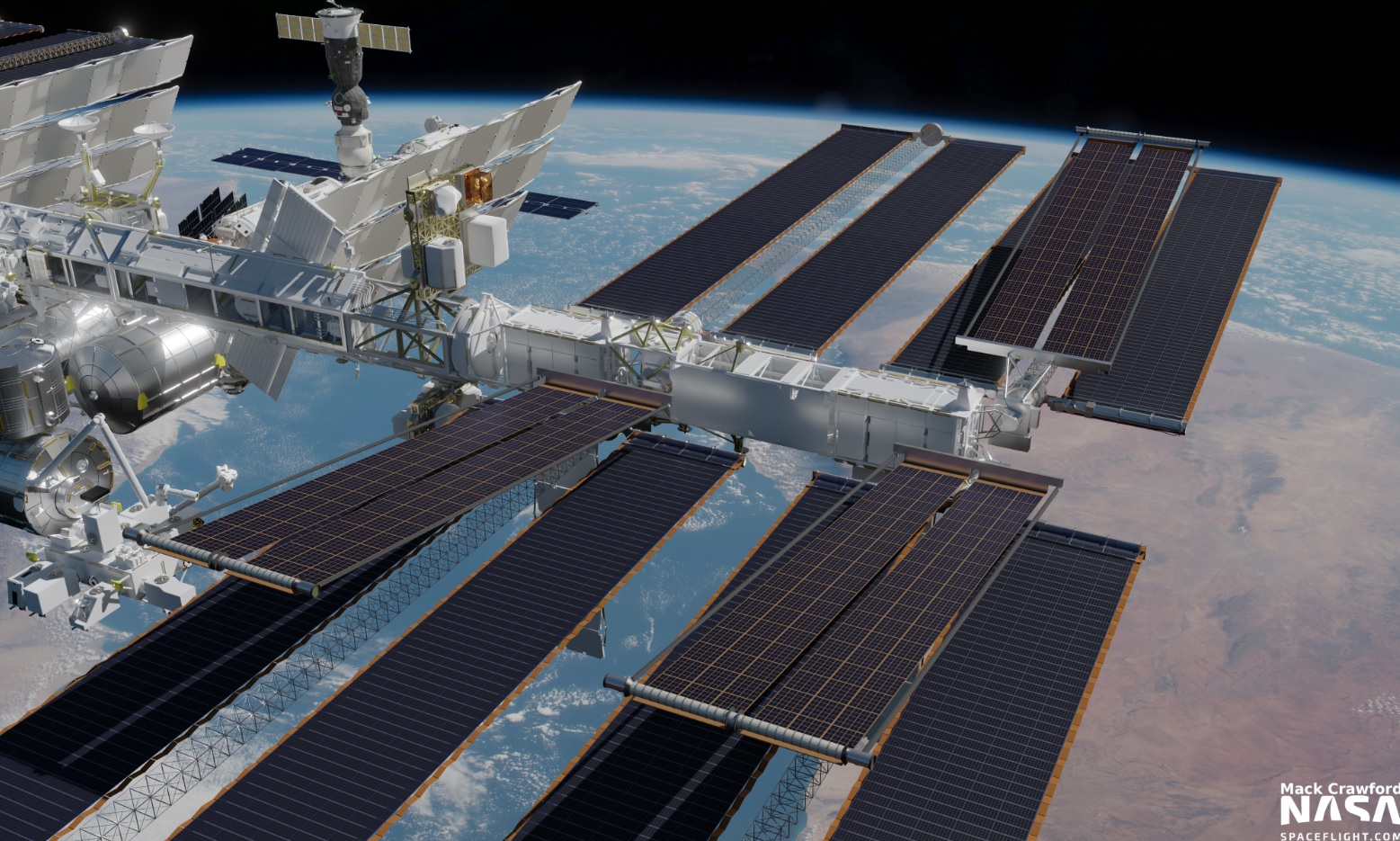 The ISS, seen with three of its new iROSAs. (Credit: Mack Crawford for NSF/L2)

Once work to assemble the mod kit was complete, the 4A solar array was ready for the arrival of a new IROSA on the SpaceX CRS-25 flight in May 2022.

After cleaning up the worksite, Aki and Thomas completed one last final task of replacing a failed Floating Potential Measurement Unit (FPMU) on the P1 truss.

The FPMU is a device that measures the electrical charges which build up outside the ISS, which can pose a threat to astronauts and electronic equipment. The antenna-like hardware will be replaced with a new unit.

The two astronauts then headed back inside the Quest airlock to conclude the EVA.

Overall, US EVA-77 was the 244th spacewalk in support of construction, outfitting, and maintenance of the ISS, the 14th EVA of the year (12 on ISS and 2 on the Chinese space station), and the 7th for Expedition 65.

Moment of Proof for Ship 20 and Booster 4