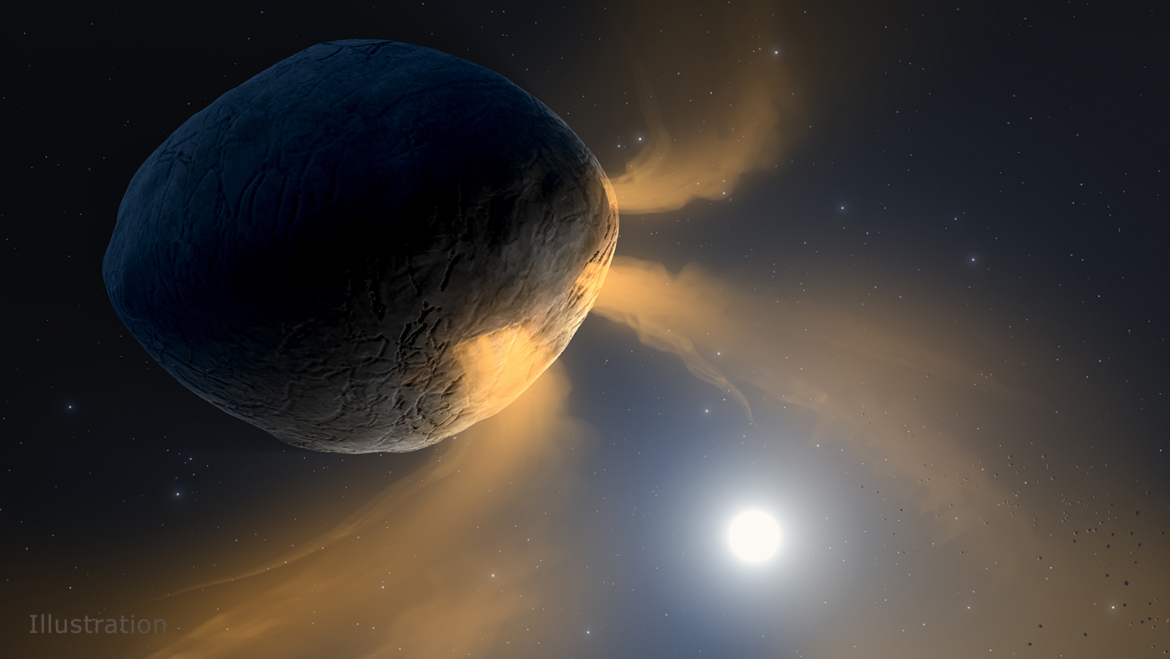 Comets are famous for their expansive, colorful, and stunning tails of gas, ice, rock, and various other material. These tails occur as a comet’s icy nucleus is heated as it nears the Sun, releasing ice gases during a process called “outgassing.”

Outgassing is not limited to comets, though. Some moons, such as Jupiter’s Ganymede, and other icy bodies in our solar system can be heated enough to release gases.

So when scientists found an asteroid mainly composed of rock that was outgassing material, they were quite confused.

Meet Phaethon, a near-Earth asteroid that was recently found to exhibit comet-like activity.

Phaethon lacks significant amounts of ice on its surface; so why is it emitting gases from its surface and brightening like a comet?

Phaethon is a 5.8 km wide Apollo asteroid that passes closer to the Sun than any other currently named asteroid, although some smaller unnamed asteroids do have closer perihelions.

While its name, Phaethon, might not sound familiar, it is the parent body of the well-known Geminids meteor shower that occurs annually in mid-December.

Phaethon’s closest approach to the Sun comes every 524 days, heating the asteroid’s surface to approximately 750°C — hot enough to release any water, carbon dioxide, or carbon monoxide ice on the surface of the asteroid.

However, with such a short orbital period, these elements would have baked off long ago. Yet, the asteroid still outgases today.

In a new study led by Joseph Masiero of Caltech’s IPAC (Infrared Processing & Analysis Center) research organization, a team of researchers studied the comet-like behavior of Phaethon as it approached the Sun, looking for what the asteroid could be outgassing.

And they think they have their answer. 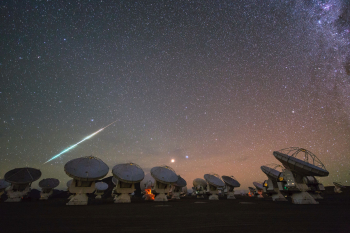 At 750°C, sodium can “fizz out” from the surface of an asteroid into space. Furthermore, sodium is plentiful on asteroids and could explain the continuous outgassing seen at Phaethon during its every-524-day perihelion pass.

That is… if Phaethon has enough sodium as part of its composition.

To find the complicating answer to that, we return to the Geminid meteor shower which Phaethon creates.

Meteor showers occur when small pieces of rocky material ejected from the surface of their parent bodies enter Earth’s atmosphere and burn up, producing varying colors of light and brightness depending on their composition.

If a meteor contains sodium, it will burn orange as it enters the atmosphere.

And therein lies an issue. The Geminids are low in sodium. So how could sodium explain Phaethon’s comet-like activity?

Scientists believe they now know why a near-Earth asteroid named Phaethon may be exhibiting cometlike activity. Models and lab tests suggest the asteroid gets so hot that it vents sodium vapor as it orbits close to the Sun. https://t.co/9aBJW5Kady pic.twitter.com/159rxJoxNR

Before Masiero et al.’s study, it was thought that the rocky material ejected from Phaethon lost its sodium soon after leaving the asteroid, which would explain the lack of orange-colored meteors during the Geminids.

However, Masiero et al.’s study suggests that sodium may be the main force ejecting the rocky material from Phaethon’s surface in the first place.

The team proposes that as Phaethon is heated as it nears the Sun, sodium on the asteroid is heated and vaporized into space.

But just as with ice volatiles, if sodium existed on the exterior of Phaethon, it would have been heated and vaporized long ago. So the sodium would have to come from the interior of the asteroid instead, transported to its surface for outgassing via tiny fissures.

As the now-vaporized sodium “fizzes” into space through the small cracks and fissures in the asteroid’s surface, it would create jets with just enough force to eject rocky material off of the surface — thus creating the Geminids and the sustained comet-like behavior seen today.

“Asteroids like Phaethon have very weak gravity, so it doesn’t take a lot of force to kick debris from the surface or dislodge rock from a fracture,” said Björn Davidsson, co-author of the study and scientist at NASA’s Jet Propulsion Laboratory (JPL). 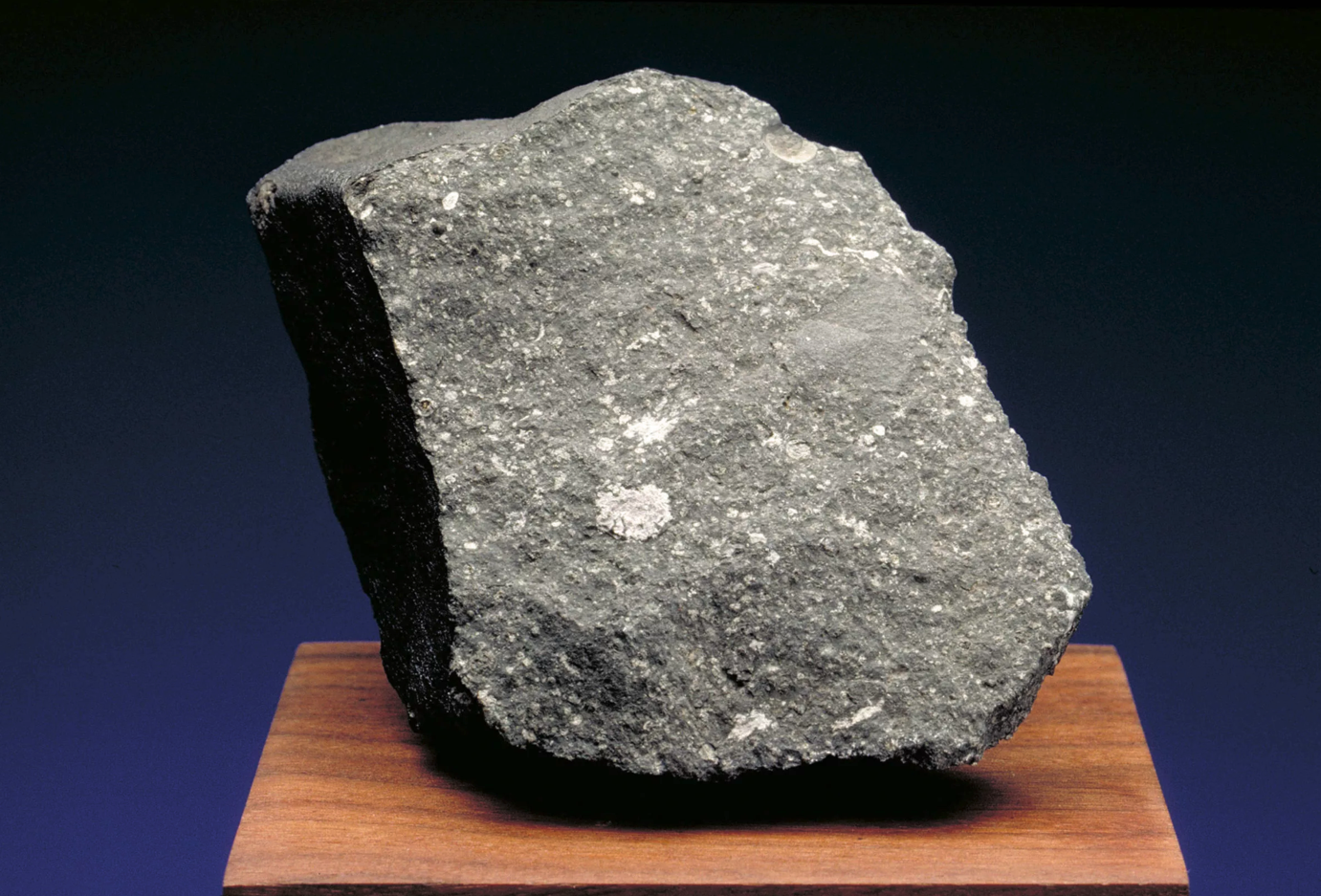 A fragment of the Allende meteorite that fell to Earth in northern Mexico on February 8, 1969. (Credit: Chip Clark, Smithsonian Institution)

The ejection of this material would explain Phaethon’s comet-like brightening, and the lack of sodium on the exterior of Phaethon would explain why the Geminids lack sodium.

“Our models suggest that very small quantities of sodium are all that’s needed to do this — nothing explosive, like the erupting vapor from an icy comet’s surface; it’s more of a steady fizz.”

So how did the team test their hypothesis?

Masiero et al. tested samples of the Allende meteorite — that fell over Mexico in 1969 and belongs to the same class of asteroids, carbonaceous chondrites, as Phaethon — in a lab at JPL.

The team heated chips of the meteorite to the highest temperature Phaethon experiences during its approach to the Sun. Additionally, the team simulated a day on Phaethon, which lasts 3 hours.

“On comparing the samples’ minerals before and after our lab tests, the sodium was lost while the other elements were left behind. This suggests that the same may be happening on Phaethon and seems to agree with the results of our models,” said Yang Liu, JPL scientist and co-author of the study.

The findings may explain how other asteroids continue to be active as they could undergo the same process as Phaethon.

The results of Masiero et al.’s study also support the hypothesis that classifying small objects in the solar system as either comets or asteroids is an oversimplification.

Some researchers believe factors such as ice amounts and what elements vaporize at certain temperatures should come into play when categorizing small bodies.