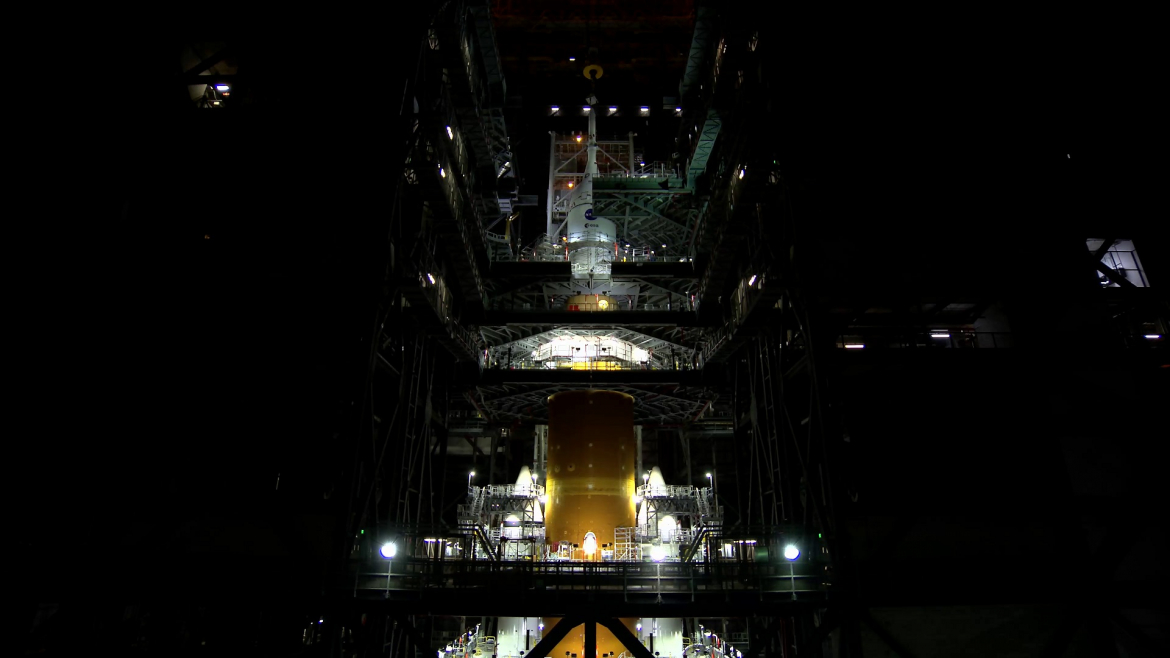 With the first set of tests complete, Orion could finally be stacked on SLS to complete vehicle integration, but it also allowed the Integrated Operations workforce in the VAB time to resume multiple paths of launch preparation work. The resumption of full activity, along with the results of the testing so far, is now being factored into projections about the forward processing schedule for Artemis 1 and forecasts for when the vehicle and ground systems will be ready for launch. EGS is constantly integrating the Artemis 1 schedule with Jacobs and contractor teams that are also working on the vehicle.

After the first round of tests, the latest assessments are projecting the earliest readiness for launch towards the end of January 2022. Modeling of the uncertainty around the first-time SLS/Orion launch campaign projected months of schedule risk from the time the SLS Core Stage arrived at KSC following its Green Run design verification campaign at the Stennis Space Center in Mississippi.

When the Core Stage arrived in late April, contemporaneous schedule projections forecasted that the six months of estimated work could take up to 10 months to complete. The four months of “assessed risk” in the schedule was divided between the different phases of stacking, special testing, and pre-launch checkouts; so far, the pace of work has “realized” just about the amount of schedule risk estimated to this point in pre-launch processing.

The special, back-to-back umbilical and modal tests were a critical point in processing due to their requirements. The modal test required all the ground connections to the SLS to be broken, which the umbilical test accomplished; additionally, the modal test required all internal access to the vehicle to be removed, which meant that other pre-launch preparation work had to be temporarily suspended until after the tests.

While many eyes are focused on the final stacking, the other work paths look to be more critical to the schedule. Following the modal test, internal access to the Core Stage engine section and the Launch Vehicle Stage Adapter (LVSA) has been reestablished so primary contractors can continue working on final modifications before first flight.

Core Stage prime contractor Boeing is completing post-modification work on the clutch mechanisms for the eight Main Propulsion System prevalves and is beginning installation of a modified MPS hydrogen bleed line. LVSA prime contractor Teledyne Brown Engineering is re-routing some of the wire harnesses inside the SLS Block 1 stage-to-stage adapter. 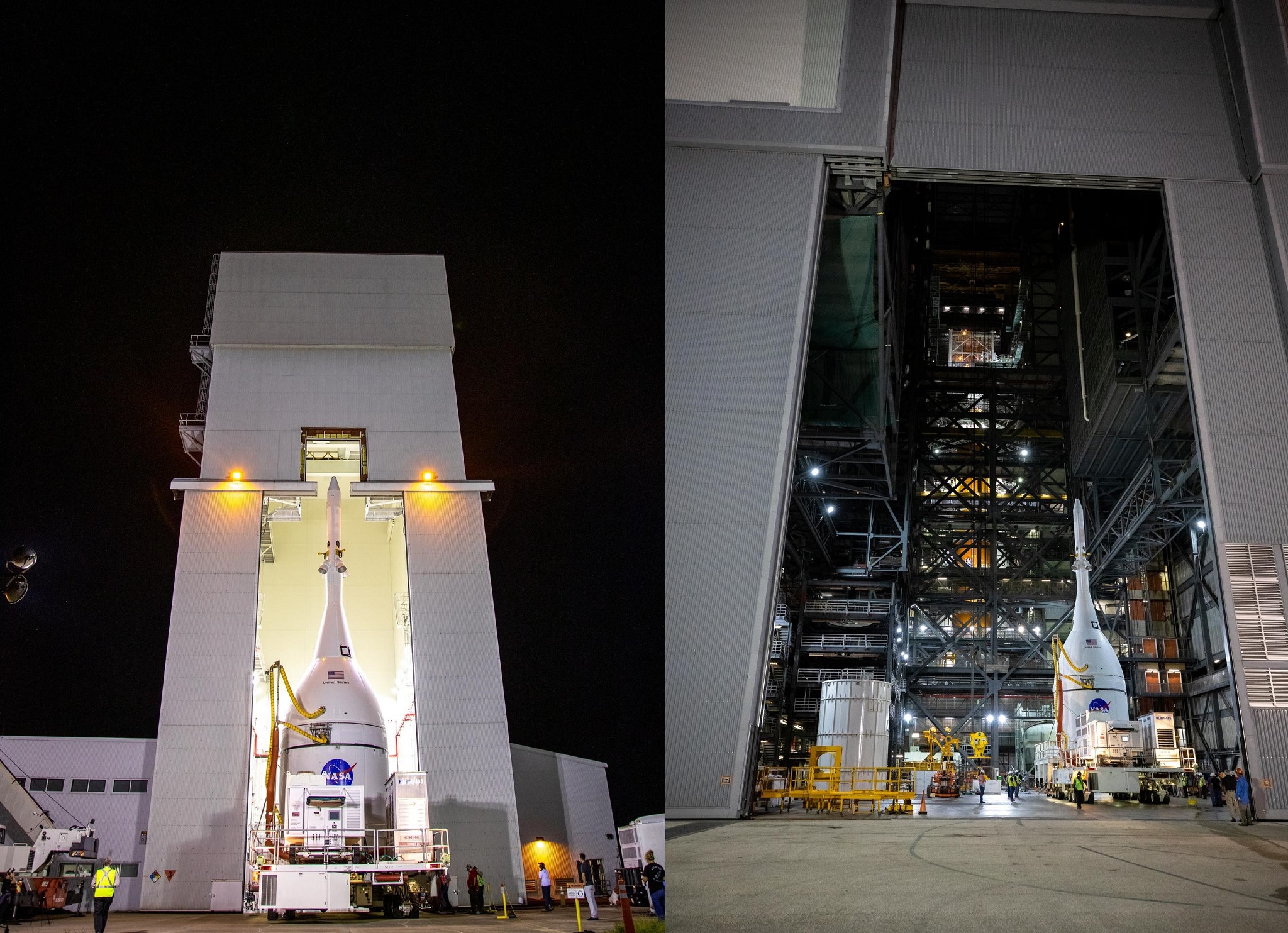 (Photo Caption: The Artemis 1 Orion spacecraft is seen on its transporter at departure and arrival during its move from the Launch Abort System Facility (left) to the Vehicle Assembly Building (right) in the early hours of October 19. The spacecraft was taken to High Bay 4 in the VAB, which is a pre-lift staging area for SLS and Orion hardware.)

In parallel with that work, EGS and Jacobs are reconnecting the Mobile Launcher umbilicals and support arms back to the SLS following the umbilical test. The timeline for getting the umbilicals reattached is one of the factors that has pushed back the launch readiness date, with work on the Core Stage Inter-Tank Umbilical (CSITU) pushing back its reattachment from early October to early November.

In addition to the final SLS vehicle modifications, repairs are being made to the compliance mechanisms in the CSITU. “The compliance mechanism is the structural elements which support the ground plate and flexible commodity connections,” Kevin Miller, Chief of the Structures and Mechanisms Design Branch at KSC said in an email to NASASpaceflight.

“The series of structural links, joints, and bearings provides the degrees of freedom necessary to allow the compliance, or the range of motion, necessary for the vehicle to move independent of the main truss with minimal load transfer.”

Rather than something that was discovered during the recent umbilical test, the issues were noted in earlier, off-nominal test cases of the umbilical systems conducted individually at the Launch Equipment Test Facility (LETF) at KSC. “This repair is not related to the latest release and retract test,” Miller explained.

“[It] was necessitated as a result of significantly higher loads experienced during failure mode tests previously performed at the Launch Equipment Test Facility. The compliance mechanism continued to function nominally across numerous other tests.”

“It wasn’t until removal of the LETF ground test plate for flight that [the] bushings and pins were actually able to be inspected and the decision was made to replace the worn components to ensure smooth operation of the joints,” he noted. 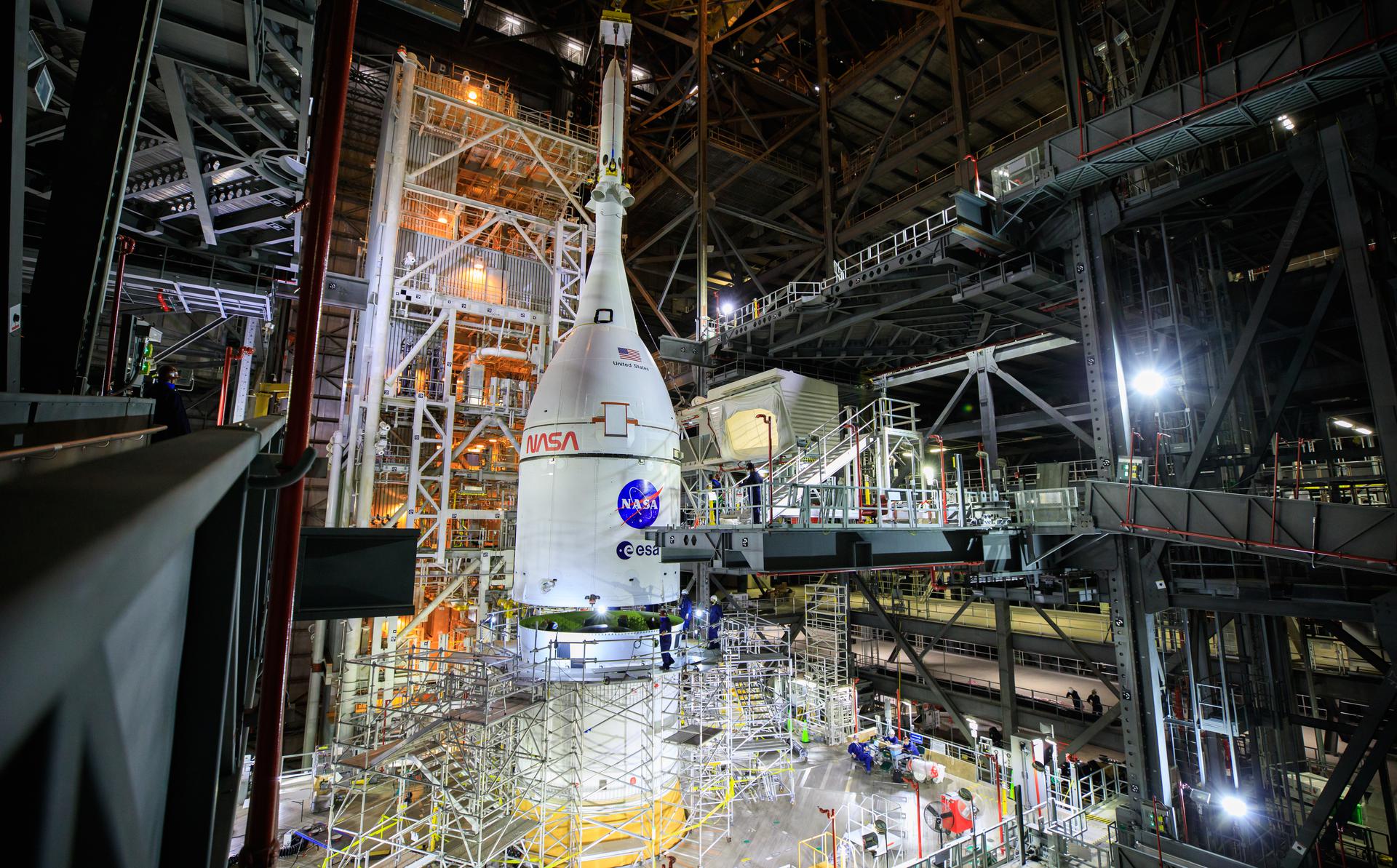 (Photo Caption: The Artemis 1 Orion spacecraft is lowered into position over the Orion Stage Adapter at the top of the SLS rocket on October 20 in VAB High Bay 3. To the right of Orion is the Crew Access Arm, which will be used to access the Crew Module during final launch preparations.)

Miller also clarified the behavior seen with one of the Orion umbilical connections during the umbilical test in September. During the test, the disconnect timing of the environmental control system (ECS) air-conditioning duct appeared different than in tests performed on the Orion Service Module Umbilical (OSMU) in the LETF.

Miller noted that the lanyard is sized for liftoff conditions when the vehicle will just be beginning to rise, as compared to the umbilical test where it remained at rest. “This behavior is expected for the forward hose,” he said. “Due to the geometry of the wire rope providing disconnect, the forward ECS duct will actually disconnect earlier during flight as the vertical ascent of the SLS will pull the static wire rope taught sooner.”

With the updated assessment of final phases of launch processing, the remaining Integrated Test and Check-Out (ITCO) activities are now expected to pick up in earnest in November and continue into December, which has pushed the forecast for rolling out to the launch pad for final verification and validation testing to no earlier than late December. The Artemis 1 vehicle will roll out to Pad 39B for a full countdown Wet Dress Rehearsal (WDR), along with additional engineering tests that can only be performed outside and/or at the pad.

Now that Orion is stacked, the two-piece Orion umbilical can be attached to the spacecraft and launch fairing, which will allow some of the interface testing between Orion and the ground command and control system to begin. In addition to the final internal pre-flight modifications and umbilical remates to SLS, the spray-on foam insulation (SOFI) application is being completed on the LVSA to Core Stage forward skirt flange.

Much of the vehicle will be closed out for launch before the first rollout, with work on final closeouts currently scheduled to begin in the second half of November. The WDR countdown will take the ground infrastructure, the Orion spacecraft, and the fully-fueled SLS launch vehicle up to 10 seconds before liftoff; with a few exceptions, the vehicle will be in a launch configuration for the test. 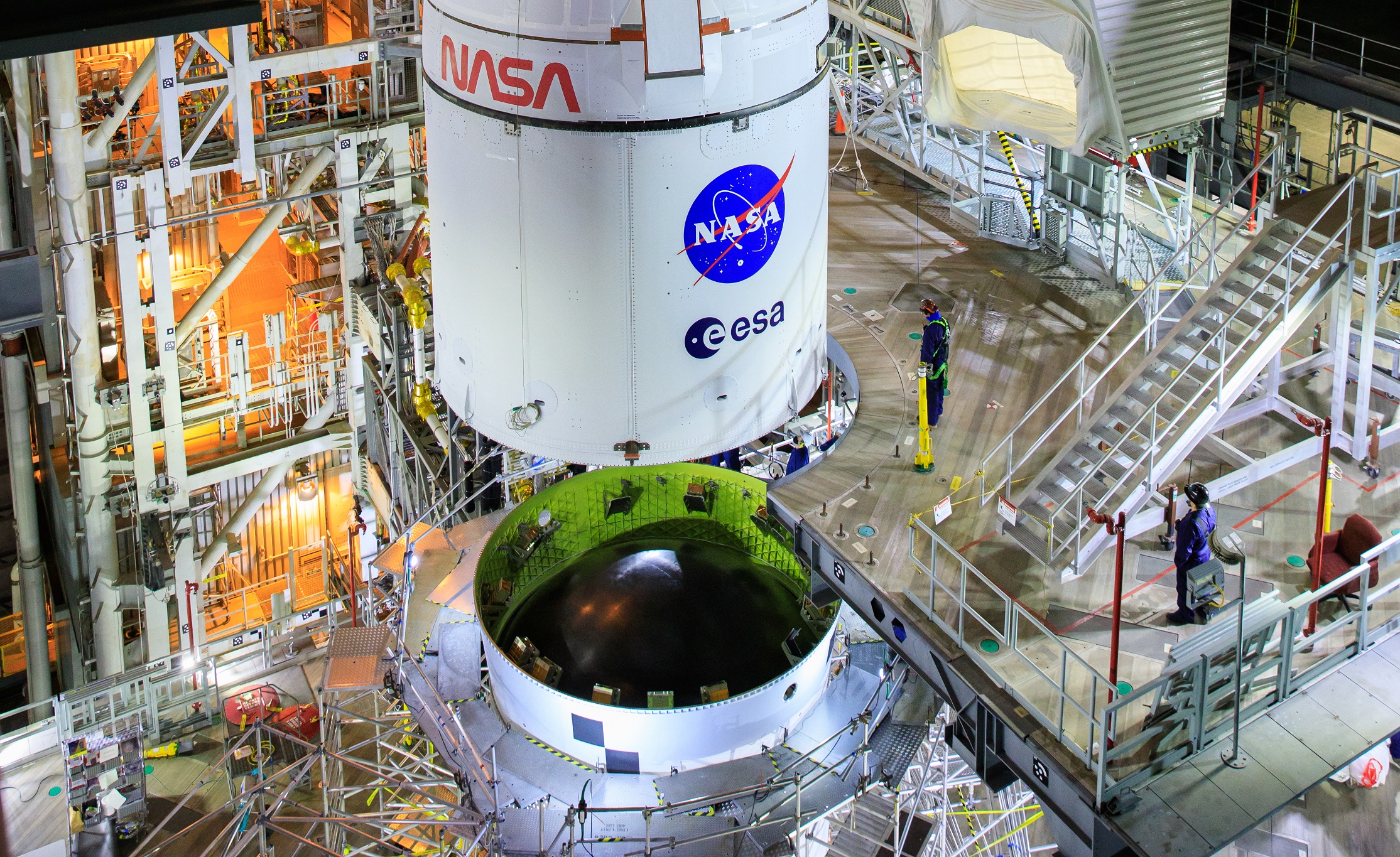 (Photo Caption: Several of the CubeSats installed inside the Orion Stage Adapter can be seen as Orion is lifted down over them during lift-to-mate operations on October 20. The dispensers holding the CubeSats are angled so that they clear the Orion’s Spacecraft Adapter that will remain attached on top of the OSA, staying with the SLS second stage after Orion separates during Artemis 1.)

The vehicle and Mobile Launcher will return to the VAB after the full dress rehearsal countdown for final servicing of systems before launch. Time-critical systems installations, final equipment stowage, removal of ground test instrumentation, and vehicle inspections can only be done in the VAB — which has multiple levels of access platforms not available at the pad. Any post-WDR issues with the vehicle and the Mobile Launcher that might need to be addressed will be easier to do with the hands-on access available in the VAB.

The Orion and SLS programs in the ESD division are continuing to analyze launch windows for Artemis 1; NASA has daily opportunities to launch this first Artemis mission to the Moon in an approximately “two weeks on, two weeks off” pattern. Launch Period 17 is currently calculated to provide daily launch windows from January 16 through January 30, more or less; Launch Period 18 would be from about February 12 through February 27.

Eventually, launch readiness will have to be synchronized to the lunar launch windows available for Artemis 1. Not only are there time-critical tasks that need to be performed in the days before the countdown, but the EGS, Orion, and SLS Programs also have flight readiness certification reviews to conduct, followed by ones at the ESD division level, and finally at the agency level.

The programs, division, and agency want to be ready to fly when the hardware is ready and are looking at schedules for conducting the final flight readiness reviews (FRRs) ahead of finally setting a launch date for Artemis 1. Currently, the programs are tentatively working towards the Launch Period 18 opportunity in February.

If the projections for launch readiness were to converge towards the February opportunity, the EGS, Orion, and SLS Programs would hold their program-level review boards in the first part of January, followed by an ESD review at the division level in late January, and, finally, an Agency FRR in early February would be held about a week before the launch period opens. At the end of all those reviews, a launch date would be set following the Agency FRR, but with several tests and milestones still to be completed both in the VAB and out at the launch pad before the ground hardware and the flight vehicle will be ready to fly, those tentative schedule plans are subject to further change.