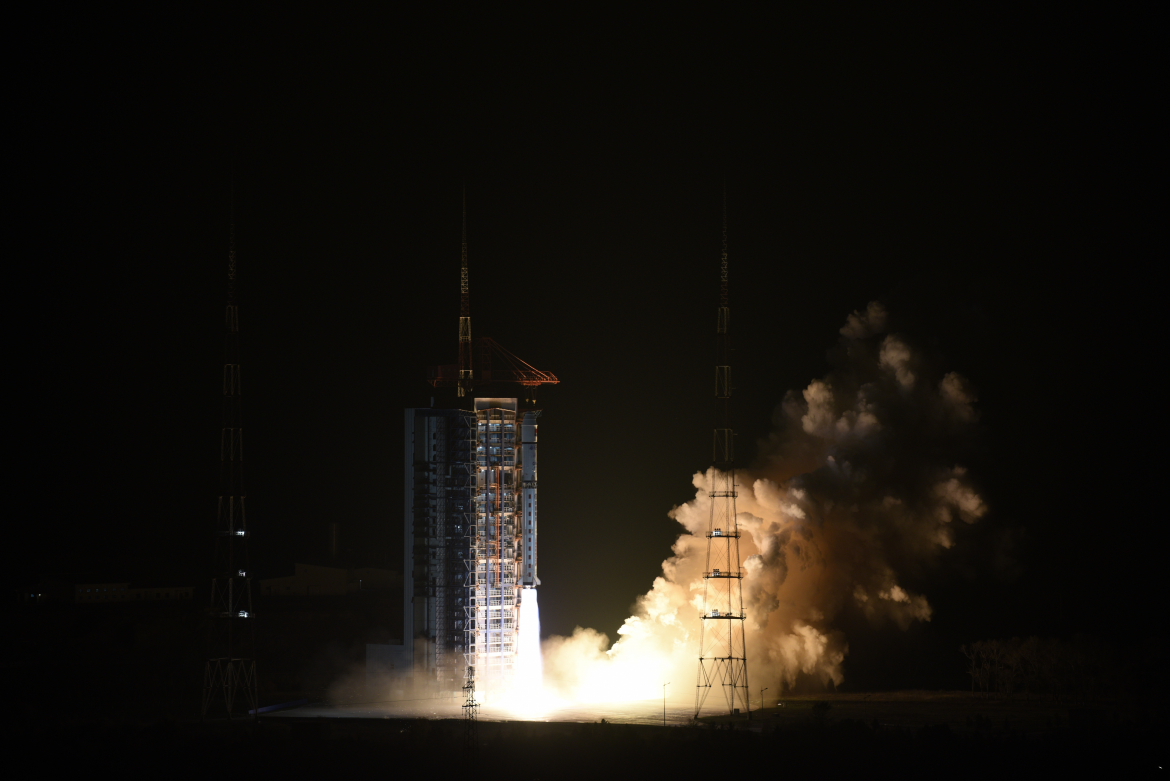 China has launched a small experimental solar observatory as part of a multi-satellite launch aboard a Long March 2D rocket Thursday. The launch took place from the Taiyuan Satellite Launch Center at 10:51 UTC (18:51 Bejing time).

Thursday’s launch carried eleven satellites, with the primary payload being the Chinese Hydrogen-Alpha Solar Explorer (CHASE), which was delivered to a low Earth orbit at an altitude of about 517 kilometers, with an orbital period of around 94 minutes.

The 550-kilogram CHASE satellite is a precursor to a larger Chinese solar observation satellite, the Advanced Space-Based Solar Observatory (ASO-S), which is due to launch next year. CHASE is the first satellite to be equipped for full-disk hydrogen-alpha solar spectroscopy. The spacecraft has been built around a bus which is expected to provide excellent pointing accuracy and stability. 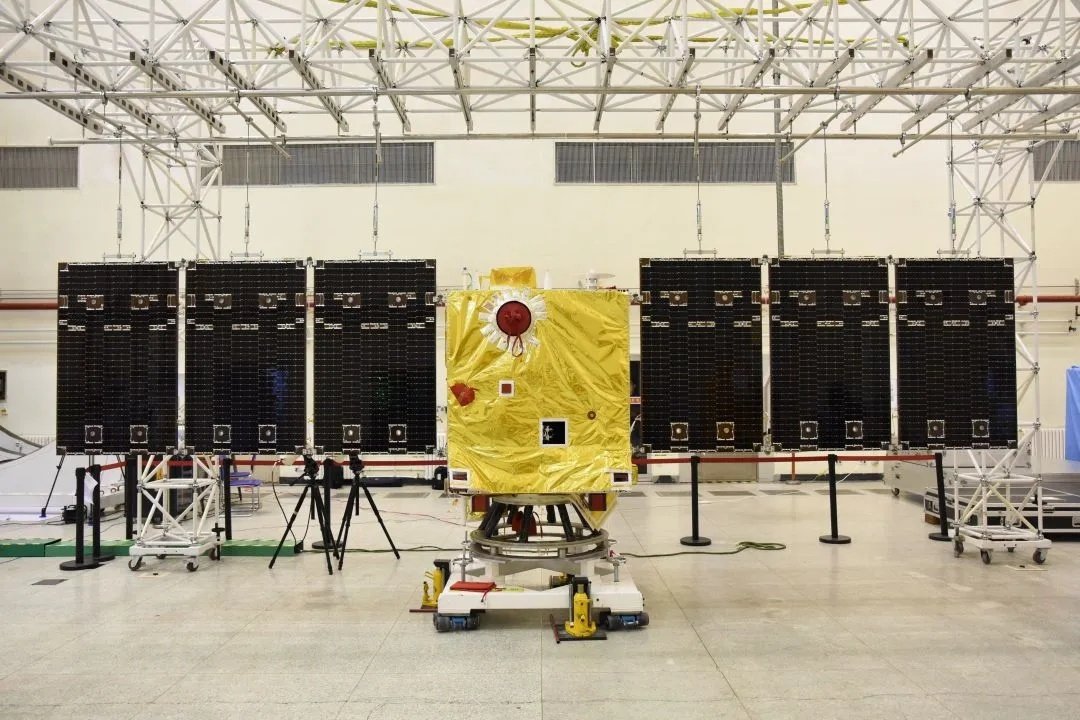 The CHASE satellite before launch

The hydrogen-alpha wavelength is deep red and is centered at 656.28 nanometers – for comparison, visible light runs from 400 to 700 nanometers. Observing the Sun at the hydrogen-alpha wavelength can reveal structures, evolution, and dynamic processes associated with solar flares and filaments. Hydrogen-alpha observations can also reveal solar wave phenomena, which are precursors to coronal mass ejections, and the dynamics of activity in the Sun’s lower atmosphere.

While it is possible to image the Sun at this wavelength from observatories on Earth, the light they receive may be absorbed or refracted by water molecules as it passes through the atmosphere, while a space-based observatory is not affected by this and can produce clearer data without this contamination. Observations can also be made without any hindrance from cloud cover.

Scientists will be able to combine data from CHASE with that from other spacecraft in an international fleet that keep watch over the Sun – which include ASO-S, STEREO, the Solar Dynamics Observatory, IRIS, Parker Solar Probe, and Solar Orbiter – to provide a fuller picture of solar activity and dynamics. This is important as the Sun not only provides heat and light for Earth and the solar system but also can cause very negative effects on the technology we use in daily life through solar flares and CMEs.

In 1859, a CME known as the Carrington event shorted out telegraphs and caused auroral displays in lower latitudes that would not normally see the Northern Lights. A similar event today could cause severe damage to many power grids and electronics.

A lesser but still powerful mass ejection in March 1989 caused a major power outage in Quebec and interfered with radio broadcasts and weather satellites. During that event, the Northern Lights could be seen as far south as Texas and Florida.

The Sun goes through 11-year cycles with periods of minimum and maximum activity. We are currently entering Solar Cycle 25, which is increasing in intensity and sunspot activity as it heads toward a solar maximum predicted for July 2025. CHASE is scheduled to observe the Sun through the spacecraft’s three-year lifetime, helping to study our nearest star during this period of increasing solar activity. 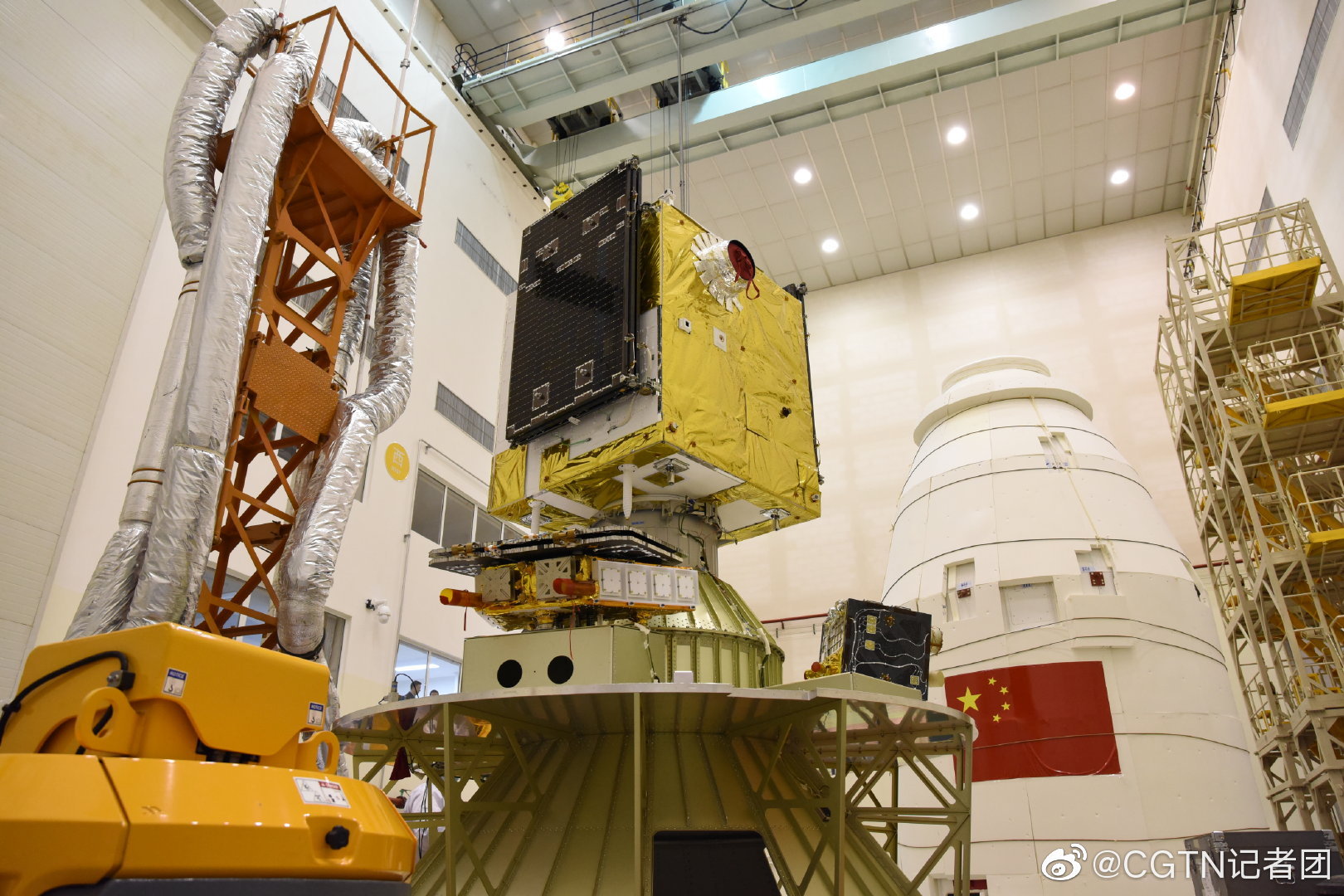 CHASE and its co-passengers are prepared for launch – via CGTN

Ten other satellites joined CHASE for its ride into orbit. These included the SSS-2A 3U CubeSat, a project led by students from Shanghai Jiaotong University’s Asia-Pacific Space Cooperation Organization (APSCO) in partnership with a team from Pakistan.  The CubeSat carries an optical camera, radiation monitor, ADS-B receiver, satellite navigation receiver, and is equipped to communicate with other satellites in orbit as part of a constellation of APSCO satellites.

Another satellite, Tianyuan-1, was built as part of a project involving pupils at a primary school in Nanjing. It is the first Chinese satellite to be built with participation from primary school children (an equivalent age group to elementary schools in the United States).

The Long March 2D, also known as Chang Zheng 2D (CZ-2D) is a two-stage rocket that is mainly used to place satellites into low Earth orbit, including sun-synchronous and polar orbital regimes. Like other older members of the Long March family, is fueled by unsymmetrical dimethylhydrazine (UDMH) and dinitrogen tetroxide, a hypergolic propellant combination that the family owes to its history as a derivative of the Dongfeng 5 missile. These propellants are being phased out on newer Chinese rockets due to their toxicity.

Thursday’s launch targeted a near-polar sun-synchronous orbit, inclined 98 degrees to the equator and at an altitude of about 520 kilometers.

For the first time the usage of grid fins on the 1st stage has spread to the Long March 2D.

CHASE has been named Xihe, after the mother of the God of Sun in Chinese mythology. pic.twitter.com/SFdumoTgbz

For the first time, the Long March 2D flew with grid fins on its first stage, similar to those sported by SpaceX’s Falcon 9 rocket. The purpose of these is not to help recover the stage for reuse, but to help guide it as it falls back to Earth and ensure that it falls harmlessly into its planned drop zone.

Because China’s older launch sites are located inland, its rockets have become infamous for dropping debris in populated areas, so recent launches of several Long March variants have tested the fins as a way of reducing the risk to people and property under the flight path.

Thursday’s launch is the fourth of the Long March 2D in 2021, with China previously announcing that it planned to launch this type of rocket seven times before the end of the year. The launch also comes a little over a day before China’s next crewed launch, Shenzhou 13, is due to lift off from the Jiuquan Satellite Launch Center for a long-duration stay aboard the country’s space station. That mission is currently scheduled to lift off at 16:23 UTC on Friday (00:23 Bejing Time on Saturday).