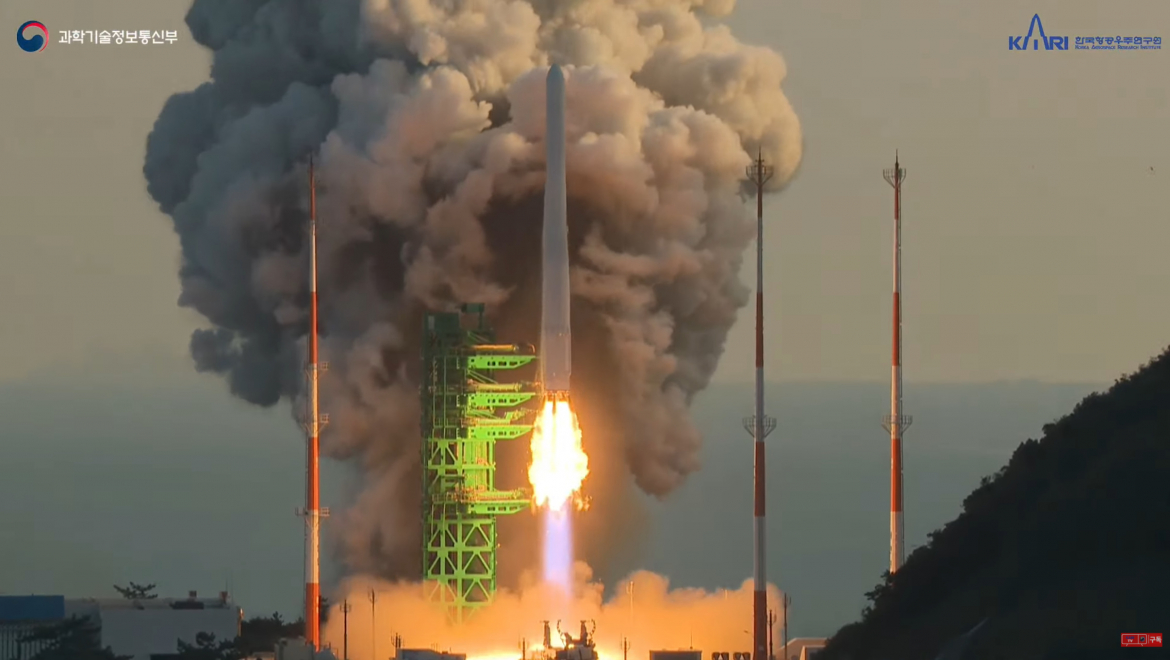 This launch attempted to carry a 1.5-ton mass simulator to a 700 km Sun-Synchronous Orbit (SSO), although a premature shutdown of the third stage resulted in a failure to achieve orbit. The flight was the fourth orbital rocket launched by KARI.

Nuri is the second rocket in South Korea’s family of orbital launch vehicles. The country’s first orbital rocket was the KSLV-I, also known as Naro-1.

Naro-1 first launched from Launch Complex-1 (LC-1) at the Naro Space Center on August 25, 2009. The first Naro-1 rocket was to carry the STSat-2A satellite to a Low Earth Orbit. The first stage performed nominally, and the vehicle successfully reached space.

Naro-1’s first stage used a modified Russian-built Universal Rocket Module (URM)-1, powered by a kerosene/liquid oxygen (kerolox) RD-151 engine. The flight failed shortly after stage one shut down, due to the payload fairing failing to separate. The second stage was unable to reach orbit due to the extra mass of the still-attached fairing.

The second stage used on Naro-1 was a South Korean-built solid-fuel rocket motor. 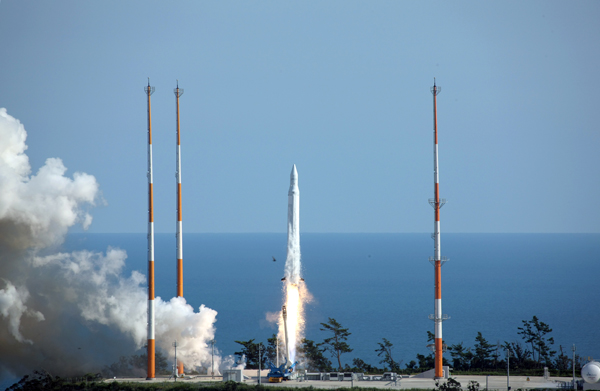 Naro-1 on its third and final flight. (Credit: Khrunichev)

The second launch of Naro-1 took place just under a year later on June 10, 2010. For this mission, Naro-1 attempted to take the STSat-2B to orbit. However, 137 seconds after launch, the launch vehicle was lost. The cause of the failure is still disputed.

On January 30, 2013, the third and final Naro-1 successfully carried the STSat-2C to orbit. This launch made South Korea the 11th and most recent country to reach orbit.

The Naro-1 was a relatively small launch vehicle, with STSat-2C massing only 100 kg. Nuri is a larger vehicle, capable of lifting 1,500 kg to low Earth orbit.

Unlike Naro-1, Nuri is an all-South Korean-built rocket. Nuri is a three-stage launch vehicle, with all stages using Jet-A/LOX as propellants.

The first stage is powered by four Jet-A/LOX KRE-075 engines. Each engine produces 735 kN of thrust and 298 seconds of specific impulse while in a vacuum.

The KRE-075 uses a gas-generator cycle to power its turbopump. Altogether, the four engines produce 2,942 kN of thrust and burn for approximately 127 seconds.  The stage is 3.5 meters in diameter and stands 21.6 meters tall.

The second stage is powered by a single Jet-A/LOX KRE-075 vacuum engine. Although it is similar to the engines used on the first stage, the KRE-075 vacuum engine is optimized for use in the vacuum of space. This engine will produce 788 kN of thrust with a specific impulse of 315.4 seconds. During the flight, it will burn for approximately 148 seconds. The second stage has a diameter of 2.6 meters and a height of 13.6 meters.

The third stage is powered by a single Jet-A/LOX KRE-007 vacuum engine. The engine will produce 68.7 kN of thrust with a specific impulse of 325 seconds while in a vacuum and will burn for approximately 500 seconds. The third stage will be the same diameter as the second stage and stand 3.5 meters tall. The entire rocket with its payload fairing will be 47.2 meters in length.

The KRE-075 and KRE-007 have both been in testing since 2016. KARI is currently planning to conduct 200 tests of the KRE-075 and 150 tests for the KRE-007. This large number of tests are intended to improve the reliability and performance of the engines.

In 2019, the KRE-007 successfully completed a 750-second test firing. This test proved the KRE-007 could operate for at least 500 seconds – the duration of its burn on the Nuri rocket. The KRE-075 conducted a similar test in March 2018 with a 220-second firing, proving its worth for the Nuri program.

Following several successful tests of the KRE-075, KARI began testing and assembly of the KSLV-II Test Launch Vehicle (TLV). The KSLV-II TLV was a small-scale launch vehicle to test the KRE-075 along with several elements of the Nuri rocket during an actual launch.

The test vehicle had a length of 25.8 meters, a diameter of 2.6 meters, and a total weight of 52.1 tons, similar in size to the Nuri second stage. The vehicle was planned to also feature a test version of the Nuri third stage, but this was dropped due to delays.

The top half of the KSLV-II TLV was a mock-up of the Nuri third stage, while the bottom half featured the Jet-A/LOX tanks. The rocket also featured a mockup interstage, payload fairing, and satellite mass simulator.

The vehicle used on KSLV-II TLV was tested during a full-duration hot-fire test in early 2018.

In mid-2018, the rocket completed assembly and shortly after was rolled out to a modified LC-1 – the same pad that was used for Naro-1. On November 28, 2018, the KSLV-II TLV successfully launched from LC-1. The flight test was called a success by KARI shortly after the flight was completed. The KRE-075 engine successfully burned for 151 seconds, 11 seconds longer than planned. The rocket reached a maximum altitude of 209 kilometers before splashing down in the Pacific Ocean.

A planned second flight was canceled due to the success of the first launch. The KSLV-II TLV still has a future, as KARI plans to turn the vehicle into a small satellite launcher. The small-sat launcher will use the KSLV-II TLV as the first stage and will likely use a methane/LOX second stage engine. The vehicle will carry up to 500 kg to a sun-synchronous orbit. This rocket will launch from LC-1 and could fly as early as 2025.

Around the same time, other components of the Nuri program were tested and completed. In 2018, the payload fairing successfully completed a separation test. Launch Complex-2 (LC-2), Nuri’s brand-new launch pad, was completed in 2020. Unlike LC-1, LC-2 will use an umbilical tower to support Nuri. LC-2 is adjacent to LC-1 at the Naro Space Center. 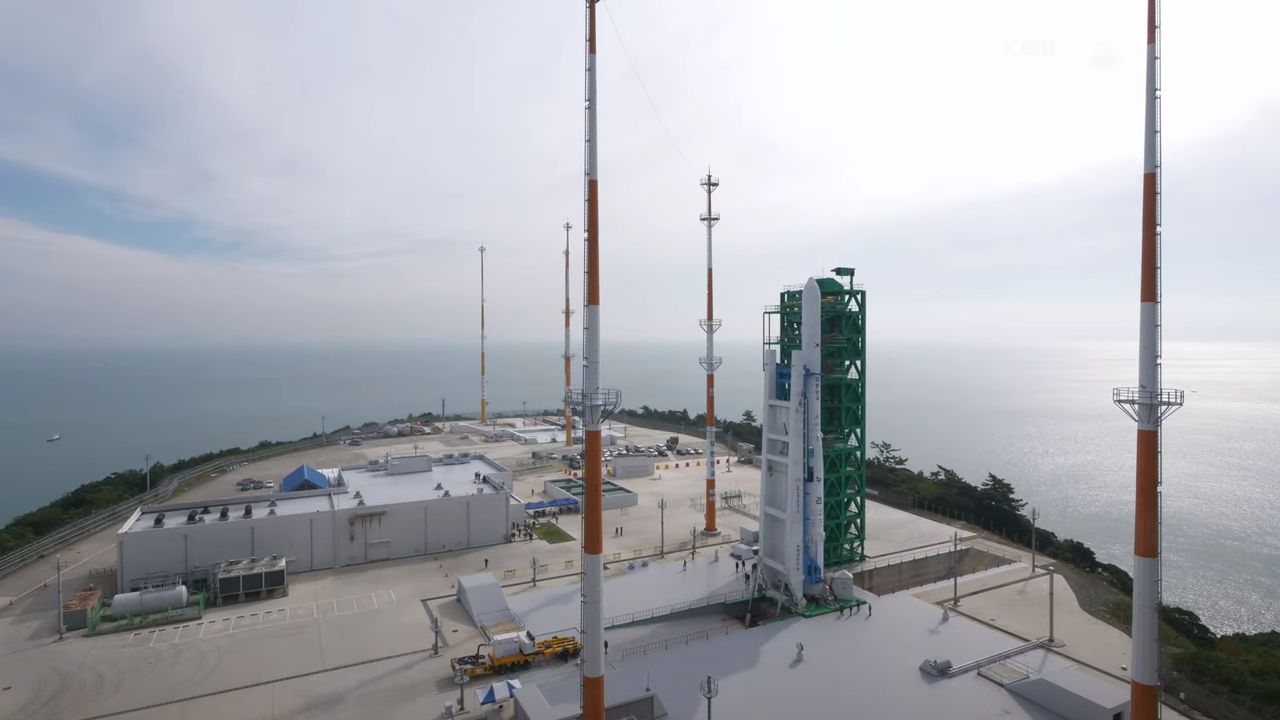 Throughout 2019-2021, the final certification tests ahead of Nuri’s maiden launch were completed. The completion of these tests green-lighted the assembly of the Nuri pathfinder. The pathfinder was rolled out to the LC-2 to allow fit-checks for the maiden flight. Shortly after, the flight vehicle was integrated and moved to the launch pad for pre-launch testing.

In early September 2021, Nuri successfully completed a wet dress rehearsal (WDR). A WDR is a test where the rocket is loaded with actual propellants during a mock launch countdown. After the WDR, the vehicle was moved back to the assembly building for final launch preparations.

After final checkouts in the assembly building, Nuri was transferred to LC-2 on the morning of October 20.  Shortly after it arrived at the pad, the rocket was raised vertical for its launch.

Once vertical, crews connected the pad umbilicals to the rocket. This allowed for electrical, communication, engine, and hydraulic tests on the rocket to be completed.

The launch day preparations began 7 hours before liftoff with final inspections of the launch equipment. At T-2 hours, both the Jet-A and LOX tanks began filling with propellants. At T-1 hour and 20 minutes, propellant loading was completed for launch.

At T-1 hour, the Nuri rocket stand was moved to its launch position. 30 minutes before liftoff, the go/no-go poll was run to certify that all systems are ready for launch. At T-10 minutes, the final countdown begans.

At T-0, the engines ignited and Nuri lifted off from LC-2 on its maiden flight. Shortly after liftoff, the rocket began a pitch program to a launch azimuth of 170 degrees. At T+55 seconds, the vehicle was supersonic.

At approximately T+ two minutes and seven seconds into the flight, the first stage shut down and separated from the second stage. The second stage then ignited shortly after.

At T+ three minutes and 58 seconds, the payload fairing separated, exposing the mass simulator to space. 34 seconds later, the second stage shut down and separated from the third stage. The third stage then ignited and changed its launch azimuth from 170 to 191 degrees.

Since this is a maiden flight, a successful outcome was not guaranteed. KARI gave the flight a 30% chance of succeeding.

KARI is currently planning for a second orbital flight of the rocket. The mission will launch a 1.3-ton satellite to orbit along with a 0.2-ton performance-verifying satellite. This flight is currently scheduled for no earlier than May 19, 2022.

Even before Nuri’s maiden flight, KARI has numerous upgrades planned for the vehicle. A possible engine upgrade is the KRE-087, which is a more efficient and powerful version of the KRE-075. The agency has also tested a new staged combustion cycle engine for upper-stage applications.

These upgrades, along with others, will be used to create a brand-new rocket. The new vehicle will allow for significant payload mass to be launched to geostationary transfer orbit (GTO) and geostationary orbit (GEO). This future rocket will be used to lift KARI’s GEO satellites, lunar exploration probes, and lunar landers.