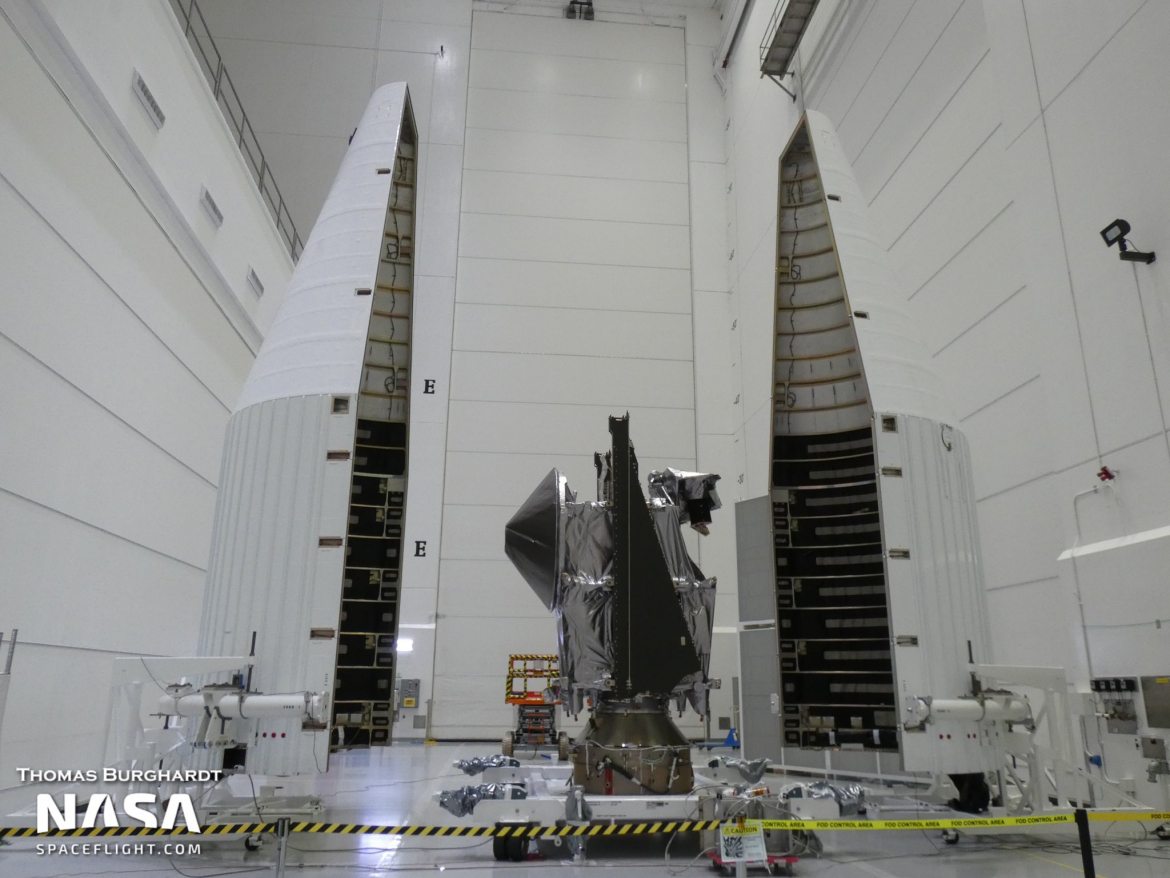 After being shipped to Florida in early August, NASA’s most daring asteroid exploration mission yet — Lucy — is now in final launch preparations as the opening of its interplanetary transfer window to Jupiter nears.

With the launch date just two weeks away, the mission’s Principal Investigator, Dr. Hal Levison, spoke with NASASpaceflight about the mission’s trajectory and what might become of Lucy once its 12-year primary mission has ended.

On July 30, 2021, Lucy arrived at the Kennedy Space Center (KSC) in Florida and was unloaded from a U.S. Air Force C-17 cargo plane and moved to an Astrotech cleanroom.

There, teams have taken Lucy through final preparations and checkouts for launch including post-shipment inspections to confirm the spacecraft was still in good condition.

Eleven days later, the craft was encapsulated inside the Atlas V payload fairing at the Astrotech cleanroom on September 29. Presently, teams are expected to take Lucy to SLC-41 in the coming days where they will mate the craft and fairing to the Atlas V rocket for launch. 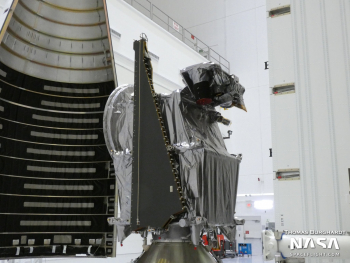 With the ongoing COVID-19 pandemic, shipment, integration, testing, and assembly of Lucy was a challenge for every team member.

“The coronavirus pandemic required us to re-engineer the way we conducted assembly, integration, and testing,” said Lucy Project Manager Donya Douglas-Bradshaw of NASA Goddard. “When I think about where the project was a year ago and the challenges we faced, I couldn’t be prouder of the entire team. The fact that the spacecraft is safely at KSC is a testament to the sacrifice and dedication shown by every member of the team and their families.”

Simultaneous to Lucy’s final preparations, United Launch Alliance (ULA) teams were busy performing their own assembly, integration, and testing of the Atlas V 401 rocket that will launch the mission no earlier than October 16.

Final assembly of the Atlas V was completed on September 16, with the Centaur upper stage being joined to the first stage booster inside ULA’s Vertical Integration Facility. The first stage on this mission was previously intended to launch the now delayed NASA/Boeing Orbital Flight Test-2 mission of Starliner in July.

On October 1, Atlas V, without its payload fairing or Lucy atop, rolled out to SLC-41 for a Wet Dress Rehearsal of the launch countdown to verify that all systems on the rocket and ground are ready to support the short, 23-day launch window for Lucy that opens on October 16.

Once it launches, Lucy has an incredibly daunting mission to perform with Trojan asteroids as the focus. Trojans have never been visited by any spacecraft to date, and Lucy is set to uncover their secrets in the late-2020s when it flies past Eurybates, Polymele, Leucus, Orus, and the binary Patroclus/Menoetius.

Today's #AtlasV test countdown successfully reached T-0. Next, cryogenic fuels will be drained and the rocket returned to the Vertical Integration Facility for #LucyMission attachment. Launch of the 12-year, 4-billion-mile trek to 8 asteroids is Oct. 16. https://t.co/RPT8Xwp5Cp pic.twitter.com/bZ5KYXkQ9f

So out of the thousands of Trojans at Jupiter’s L4 and L5 Lagrange points, how did the Lucy team go about narrowing down the list of asteroids to visit?

“Well, the primary answer to that is celestial mechanics… in the sense that you just can’t choose a random seven objects and just go to them,” said Dr. Hal Levison, Principal Investigator of Lucy, in an interview with NASASpaceflight. “We were forced to basically go to objects that just happened to align with the trajectory of the spacecraft as the spacecraft goes by.”

(Click here to read the first part of NASASpaceflight’s interview with Dr. Levison.)

“This is one of the real gems of Lucy. We found this trajectory that allows us to study the Trojans in two ways. These objects, in just about every way we can think of, cover the diversity that we care about. That’s why we need a long mission. That’s why we need a lot of targets. Again, I think it was just pure luck — and a lot of hard work — but pure luck that we could get to the objects that we see,” said Dr. Levison.

With a 12 year mission filled with asteroid encounters, flybys, and gravity assists, several factors had to be taken into account when determining the trajectory Lucy would follow, such as collisions and propellant mass.

So, what were some of the challenges Lucy’s teams faced when calculating the craft’s trajectory?

“The real danger is hitting a dust particle in a strategic place,” Dr. Levison said. “You’re not worried about hitting another asteroid. If you sat on an asteroid in the Asteroid Belt or in the Trojans which are even less dense, you wouldn’t even know you’re in an asteroid field. They’re very far apart. Hitting something like that is not a problem.” 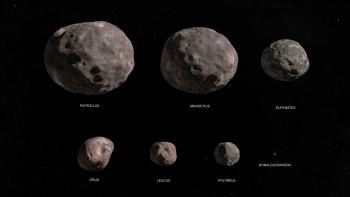 “The real trick to this — and this was a guy by the name of Brian Sutter at Lockheed Martin, really brilliant person — is that each part of the trajectory is trivial. It’s just a couple of orbits, an ellipse around the Sun. But it’s finding each stepping stone and being able to get from that stepping stone to the next in a way that allows you to build up this amazing trajectory. It was really art.”

Dr. Levison continued, saying that “This was done by hand almost, and so it’s an impressive feat that he did.

With a trajectory as specific as this though, it seems like Lucy has only one chance to launch. However, as Dr. Levison related, “It’s an evolved answer to that question. The answer is we have a backup opportunity. If you look at the trajectory we go in, we launch with a very slow relative velocity with respect to the Earth. We go into an orbit around the Sun that has an orbital period of a year. It’s slightly more eccentric than the Earth. Then we use Earth gravity assists (EGAs) to pump up the orbit of the spacecraft so we can get out to the orbit of Jupiter. We use two of these [gravity assists with Earth],” Dr. Levison described.

“Having said that, if we miss that, then we’re basically done. We’ll never get this rich [data of the Trojans]. We’d have to go and start doing searches and looking for other targets to go to, but … we’ll never get anything this rich,” Dr. Levison said.

Hammering home the point of luck with Lucy’s trajectory, the final Trojan the craft will visit is the binary Patroclus and Menoetius. And they weren’t in the plan until a team member made an animation showing Lucy’s trajectory. 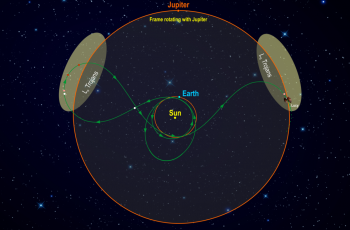 “The last Trojan, Patroclus, which is my favorite, I remember we were sitting there and Brian made a movie of just the original trajectory that was supposed to end in 2029. He put a bunch of asteroids in [the animation], and he continued the integration of the orbit of the spacecraft because one of the things he has to worry about is whether it’s going to hit anything.”

“He just left the movie running as we were talking. I noticed we went by Patroclus. It looked like we’re going close to Patroclus. I went, ‘Can we go there?'”

“He said, ‘No, no, no. Patroclus is very high inclination. It’s probably way above or below the plane of the spacecraft.’ He said, ‘It’s unlikely we can go there.’ But it just turns out that [Patroclus] happens to be crossing the plane of the ecliptic as the spacecraft is going by, so we can get to it. It’s that lucky. And [Patroclus and Menoetius are] by far, in my view, the most interesting of the objects we’re going to.”

Lucy’s flyby of Patroclus and Menoetius, being the last asteroids the craft will visit, will mark the end of the primary mission. However, many missions have received extensions beyond their primary duties — extending the spacecraft’s lifetime and mission objectives as long as power, propellant, and system health allows.

So at the end of Lucy’s 12-year mission, what more could it do and what will it do?

Dr. Levison and his team have already started thinking.

This is a set of Hubble images showing the binary asteroids 617 Patroclus and Menoetius.

The pair of P-type Trojan asteroids orbit one another at a separation of 680 km. In 2033, NASA's Lucy mission will perform a flyby of the binary system, after visiting 5 other asteroids. pic.twitter.com/Ncsija44Hj

“Our estimates are that the average lifetime of the spacecraft is something like 700,000 years, which is another part of the story — or another part of the thing we’re doing. If the spacecraft is healthy, if it has fuel… there’ll be somebody who is going to be interested in using it for an extended mission. It doesn’t have to be a Trojan mission.”

“There are some interesting objects you could go to, which is another resonance population of asteroids. [Lucy] goes through the main belt, so you might be able to get it to go [to some bodies] there. There’s a lot of things you can do.”

“We did a little study of this for our Concept Study Report, and have a list of about 20 objects that you could potentially go to with Lucy — one of which is Psyche, actually — though it’ll already be well studied [by NASA’s upcoming Psyche mission].”

This 700,000-year trajectory is one of the reasons why Lucy features a plaque — known as the Lucy plaque. The plaque features many names, quotes, and images that will be sent to space in hopes of being seen by our future explorers.

“The basic thought is, as you can easily imagine, hopefully, that 1,000, 10,000, 100,000 years from now, future astro-archaeologists [will be] going around the solar system picking up our junk to try to figure out who we were.”

“What we did is we contacted some cultural leaders and asked them to write messages of hope to our future selves. That’s basically what the plaque looks like,” said Dr. Levison. “We have Amanda Gorman — she contributed to this before she became famous — all the way to all four Beatles.”

Dr. Levison continued, “The two living Beatles actually wrote stuff for the plaque. Of course, we quote from — with permission of the estates — of ones who passed away. Also, Brian May’s on it. Dava Sobel, she wrote Longitude and Galileo’s Daughter, which are both great books. She’s on it.”

“We have a bunch of people giving well wishes to our descendants,” said Dr. Levison.

Following a successful launch, Lucy will become one of the most complicated deep space exploration missions ever to fly and will become the first spacecraft to ever visit eight objects (Earth, Donaldjohanson — a main belt asteroid, Eurybates, Polymele, Leucus, Orus, and Patroclus/Menoetius) in a single mission.