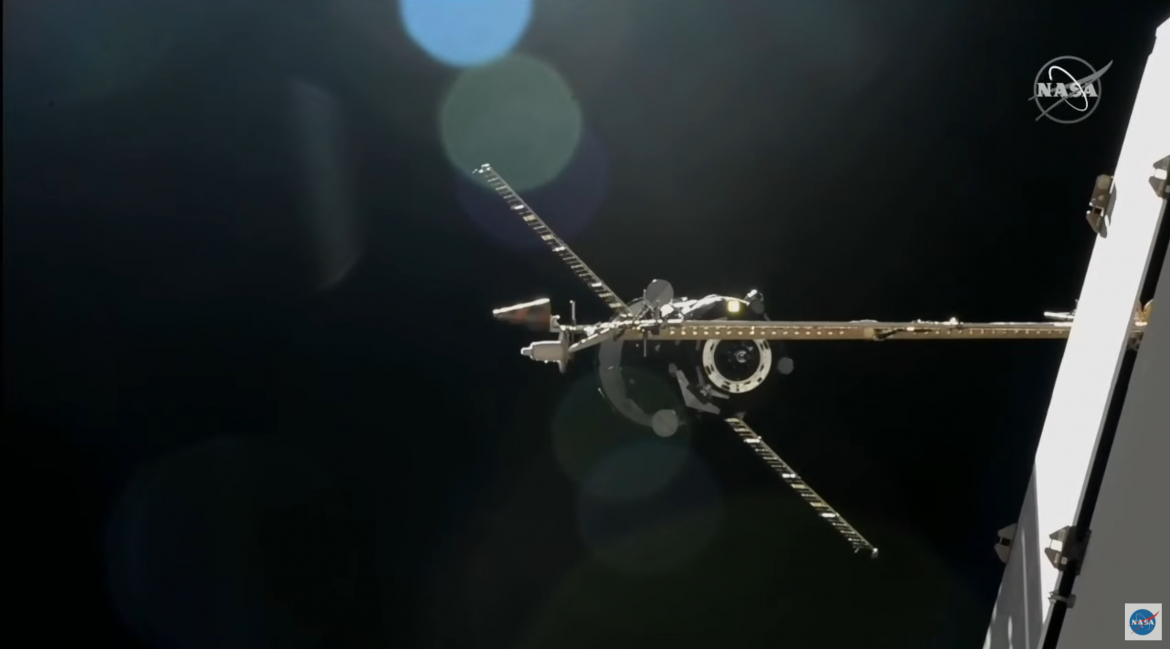 Roscosmos launched the third Progress cargo resupply mission to the International Space Station for 2021. The flight, known as Progress MS-18, lifted off from the Baikonur Cosmodrome in Kazakhstan from Site 31/6 at 00:00:32 UTC on Thursday, 28 October 2021.

Due to phasing requirements for the upcoming 31 October launch of the Crew-3 mission from the Kennedy Space Center in Florida, Progress MS-18 employed a two-day, 36 orbit rendezvous profile, arriving for docking at 01:31 UTC on Saturday, 30 October.

The Progress MS-18 mission is the second flight in a period of increased International Space Station (ISS) activity at the end of the year for Roscosmos, which earlier this month accomplished the successful crewed Soyuz MS-19 launch and the crewed Soyuz MS-18 landing — the combination of which saw a director and an actress fly to the ISS to film the first movie in orbit.

Unlike the flight earlier this month, Progress MS-18 is an uncrewed cargo resupply mission.

The serial number for this particular Progress spacecraft is 447, and it was delivered to the Baikonur Cosmodrome over a year ago in August 2020 where it was placed in storage after initial receiving inspections.

The craft was removed from storage in September 2021 ahead of final launch preparations at the Site 254 area at Baikonur, which included systems activations and checkouts for the onboard computers and information systems, the unified command, telemetry, and television systems, and the power supply system.

Kurs system communications and automated rendezvous checkouts were completed in late September using an anechoic chamber — a specialized room covered with radio-absorbing material to simulate conditions in space for ground testing of onboard radio systems.

A six-day vacuum chamber test then followed in late September through early October to verify that each individual module and the overall spacecraft was fully airtight for flight.

Integration of the Soyuz 2.1a rocket’s Blok-A core stage with its four side-mounted boosters was completed on 8 October, with functional checks of launch pad infrastructure at Site 31/6 completed on 12 October.

Progress was then fueled with propellants and station commodities before being encapsulated for launch and then mated to the Soyuz 2.1a rocket’s Blok-I upper stage.

(Tweet translation: A cargo ship is being prepared for the October launch #ProgressMS18. Today, its tests in an anechoic chamber have been completed. During the day, Roscosmos specialists performed operations to check the functioning of the Kurs-NA radio equipment for rendezvous and docking with the ISS)

The Soyuz rocket and Progress MS-18 payload were fully integrated for launch on 23 October. The vehicle was then taken by rail to Site 31/6 the following day and taken vertical into launch position the same day.

After lifting off, the Soyuz 2.1a launcher pitched and rolled onto a slightly northeast azimuth that will deliver it into a 51.6° inclination orbit, the lowest possible inclination reachable from the Baikonur Cosmodrome that does not overfly the People’s Republic of China and Mongolia and maintains a flight path over the Republic of Kazakhstan and the Russian Federation.

This desire to avoid land overflight of China and Mongolia is the reason why the International Space Station is in a 51.6° inclination orbit and not 45.9° — the latitude of Baikonur.

For the first stage of flight, the four side-mounted liquid-fueled boosters, each with one RD-107A engine, burned for the first two minutes in conjunction with the Blok-A stage’s RD-108A engine. 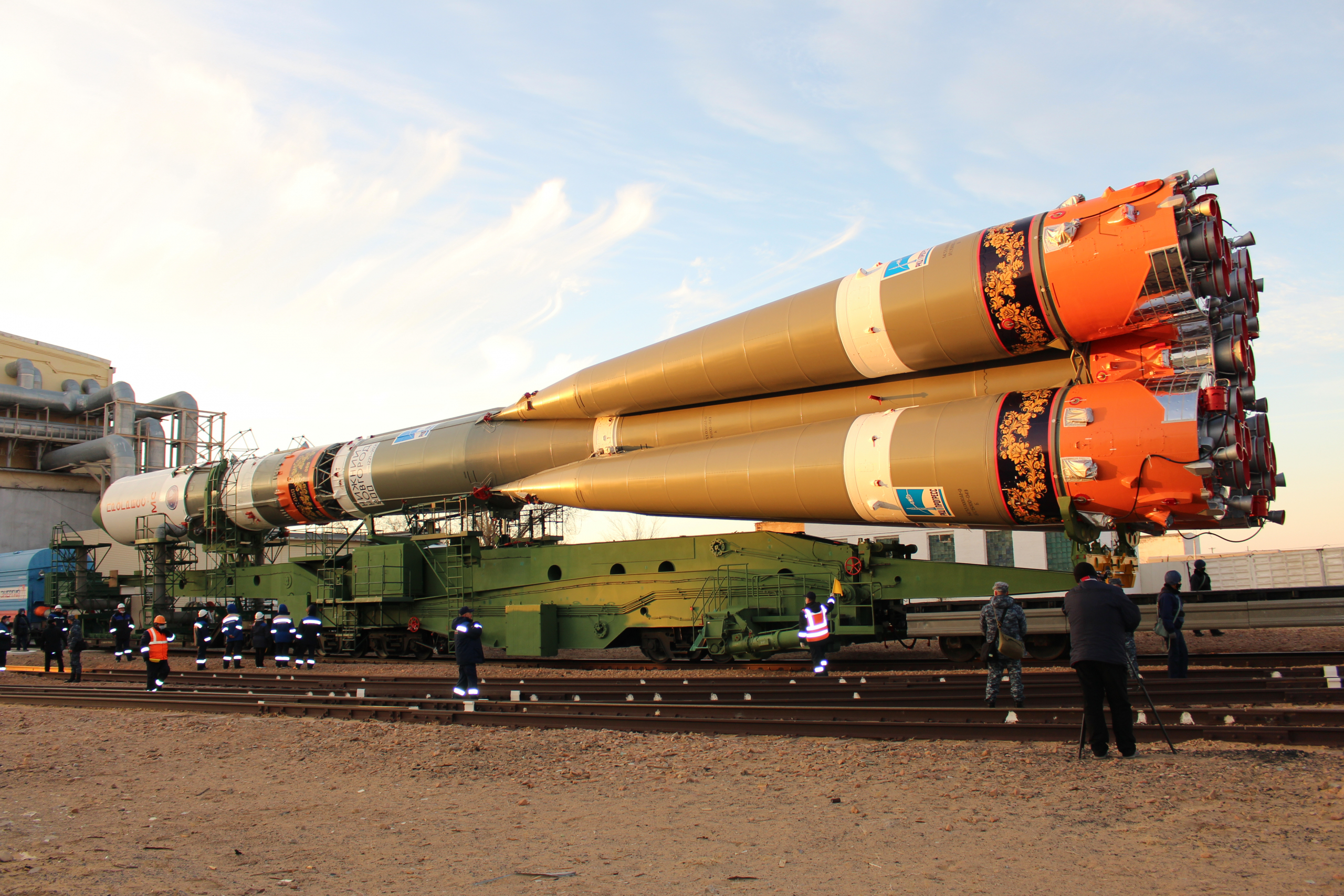 (Photo caption: Soyuz’s special livery for the Progress MS-18 mission. Khokhloma is a style of painting on wood when images of berries, flowers, branches, and sometimes birds, fish, and animals are applied on a black lacquer background. The name of the style comes from the eponymous district of Nizhny Novgorod. The livery honors the 800th anniversary of the founding Nizhny Novgorod this year.)

After booster separation, Soyuz continued onward toward orbit under the power of the Blok-A stage.

Payload fairing separation occurred approximately three and a half minutes into the flight, followed by hot staging of the Blok-I upper stage at T+4 minutes 45 seconds.

This hot staging saw the Blok-I’s RD-0110 engine ignited during the final seconds of the Blok-A’s burn. Igniting the upper stage while the lower stage is still firing and attached to the vehicle allows the propellants in the upper stage to remain stable for engine ignition without the use of ullage motors which would otherwise have to be employed if the upper stage were ignited after stage separation.

Within seconds, the separation sequence of the first stage was triggered, allowing the Blok-I stage to take the Progress MS-18 craft to its initial 200 km orbit.

After Blok-I shut down, Progress MS-18 separated shortly thereafter and quickly deployed its solar arrays and antennas to establish communication with ground stations in eastern Russia before passing out over the Pacific Ocean on its first orbit. 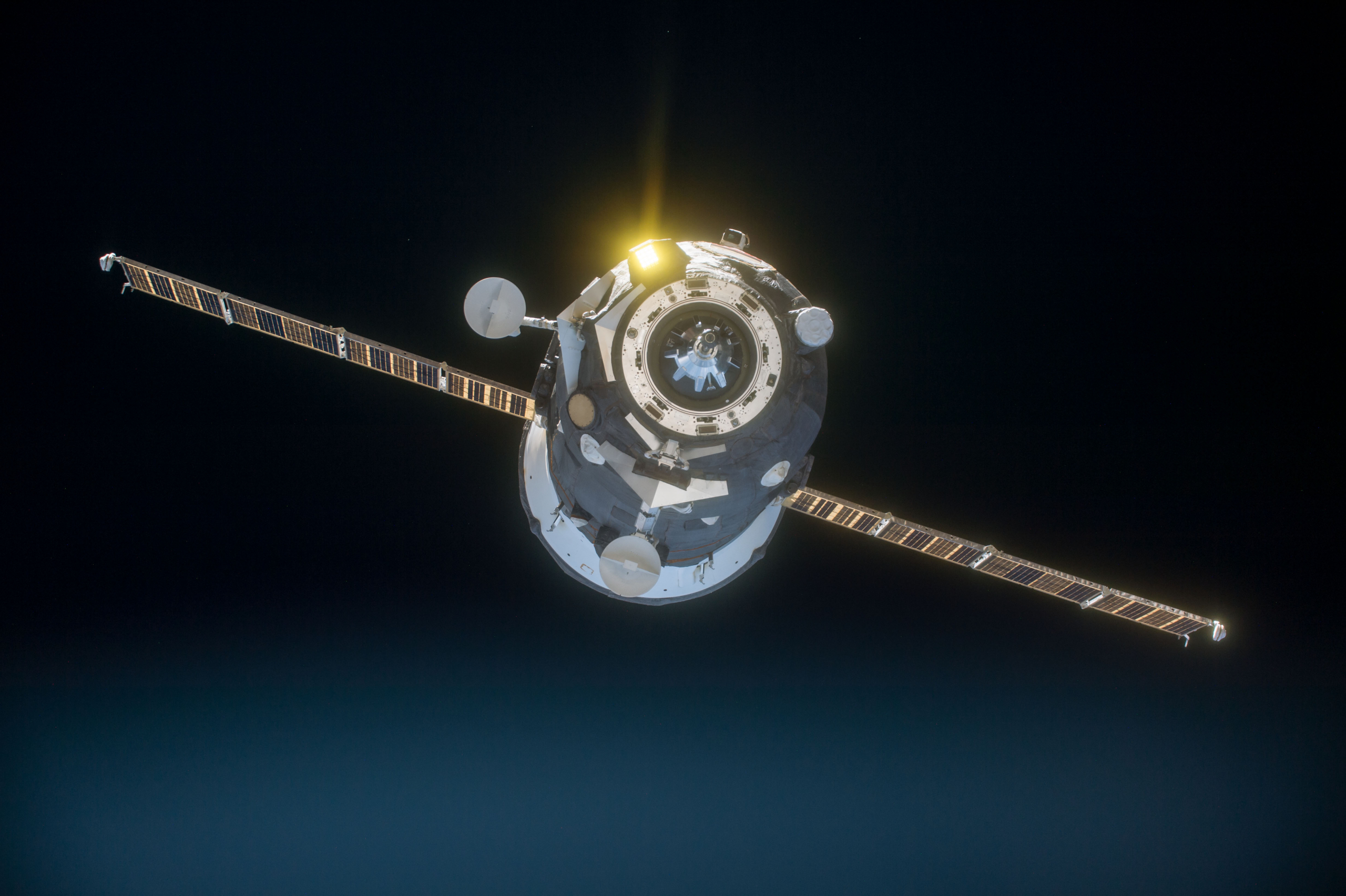 Progress MS-18 spent two days rendezvousing with the ISS, arriving on Saturday, 30 October for a docking to the aft port of the Zvezda service module at 01:34 UTC (9:34 pm EDT on Friday, 29 October).

To get there, it performed a series of three burns to gradually alter its orbit to intercept the ISS at the correct time:

Docking was planned for five minutes after orbital sunset. However, Progress crafts are usually early, potentially setting up a right-at-sunset docking.

After this mission, Russia has one additional Progress flight to the ISS this year, a modified delivery mission that will bring the Prichal docking node up to the newly arrived Nauka module. That Progress mission, Progress M-UM, is scheduled to launch in November followed by a crew flight in December on the Soyuz MS-20 mission.

(Lead image: The Soyuz 2.1a rocket for the Progress MS-18 mission on the Site 31/6 launch pad at Baikonur. Credit: Roscosmos)

On the 50th anniversary of Black Arrow, British space industry is on the verge of a return