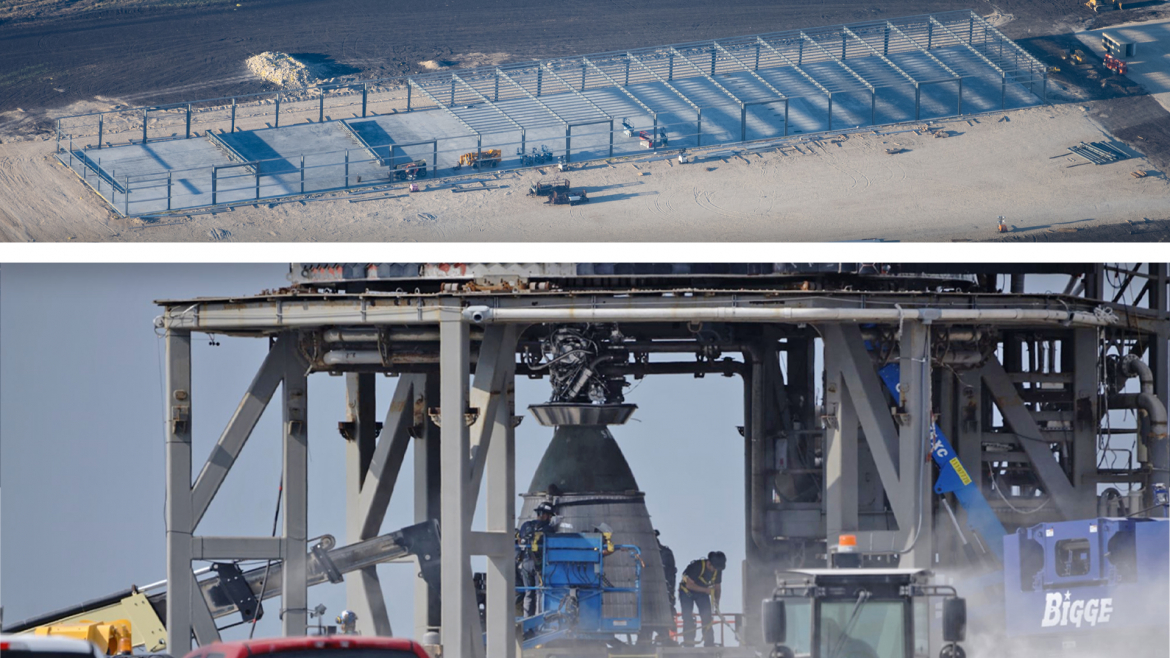 The new Raptor factory is now rising out of the ground at SpaceX’s Rocket Development and Test Facility in McGregor, Texas. Tasked with supplying Raptor 2 engines to the Starship Program, SpaceX is laying the foundations for its rapidly reusable rocket.

With the Launch Tower in the process of gaining its “Mechazilla” stacking and catching arms – a key part of recovering Super Heavy and Starships, along with their engines – numerous future vehicles are being staged at the Production Site ahead of a busy 2022.

The immediate focus is on Ship 20, with its Static Fire test currently scheduled for this week.

Following a successful proof testing campaign for Ship 20, the next milestone will be loading LOX (Liquid Oxygen) and CH4 (Liquid Methane) for a Static Fire test.

The fine details of Ship 20’s testing have not been revealed, with this vehicle being the first to sport three Raptor Vacuum (RVac) engines. To date, RVacs have only been fired up individually at McGregor.

The upcoming test – currently set for No Earlier Than (NET) Wednesday and still subject to change  – will likely involve the three sea-level Raptors.

RVac being installed under Ship 20

During the initial Static Fire test, one key test objective will focus on the Thermal Protection System (TPS), which suffered a minor liberation caused by the Header Tank venting. The vibrations of the engine’s firing will provide additional data points on how well the TPS has been applied and secured to the vehicle.

Booster 4 is waiting in line for its own proof testing and Static Fires, although this is not likely to occur until November.

With its 29 engines, Booster 4’s Static Fire campaign will likely involve several ignitions with an increasing number of engines. 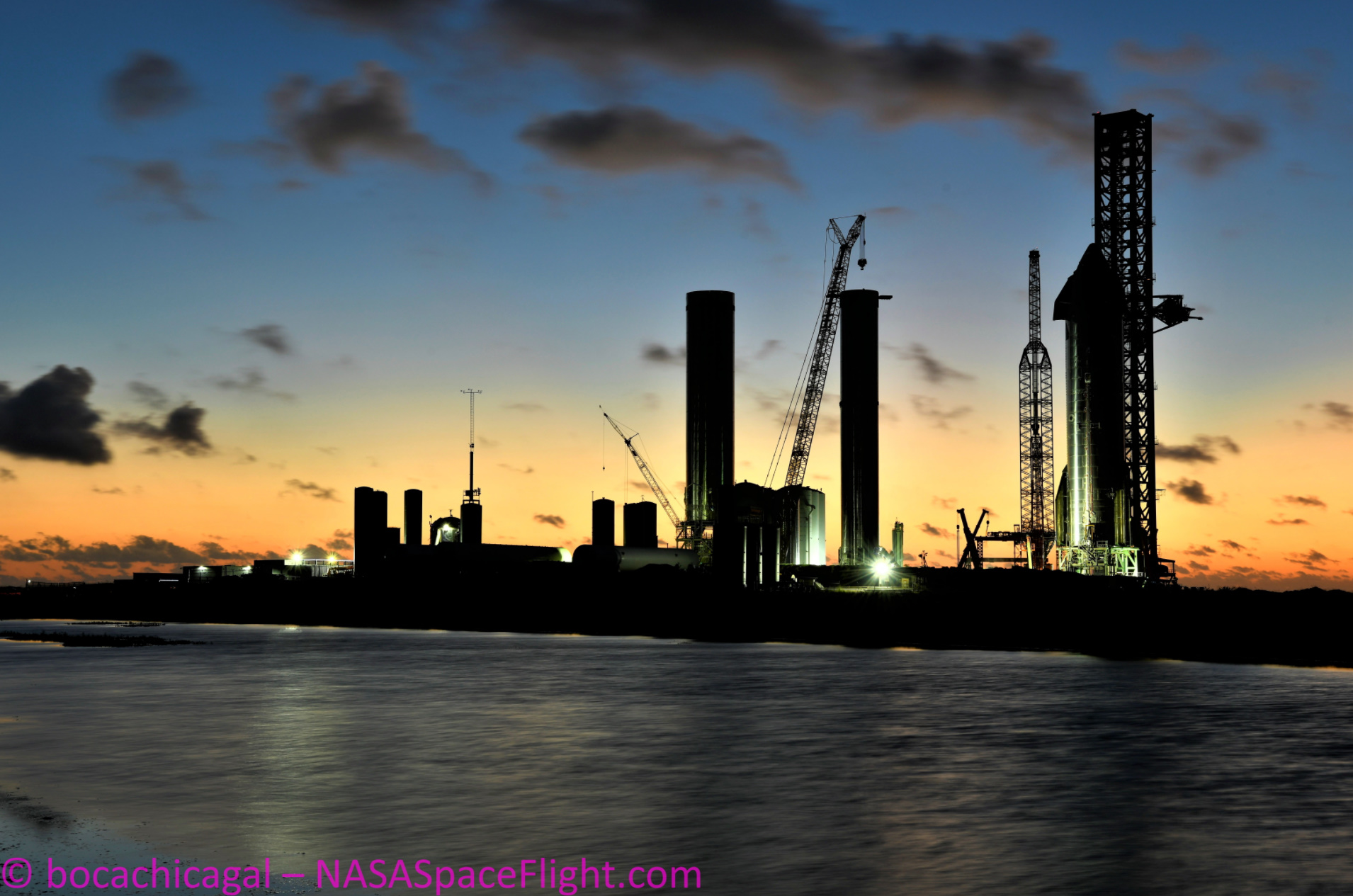 The Super Heavy was removed from its Orbital Launch Site (OLS) mount to allow for the installation of “Mechazilla” hardware to the Launch Tower.

Progress towards giving the Launch Tower its arms has been made over recent days, with the carriage system moved over to a new staging point at the Orbital Launch Site (OLS).

This set the scene for the lift and move of the first “chopstick” arm for installation onto the carriage. The second arm was also moved over on Monday.

Once both arms are secured to the carriage, the entire system will be hoisted onto the Tower. This event will set the stage for its first operation, likely to involve Booster 4 being lifted onto the mount.

Should the system require additional work, the LR 11350 crane – nicknamed “Frankencrane” by SpaceX employees – could still be used.

While Booster 4 and Ship 20’s return points will be into the ocean, Elon Musk hopes for the first catch to occur during Booster 5’s return to the launch site.

Booster 5 is already being stacked inside the High Bay, following the usual Starbase path of having the next vehicle ready to head to the launch site soon after the previous has launched. 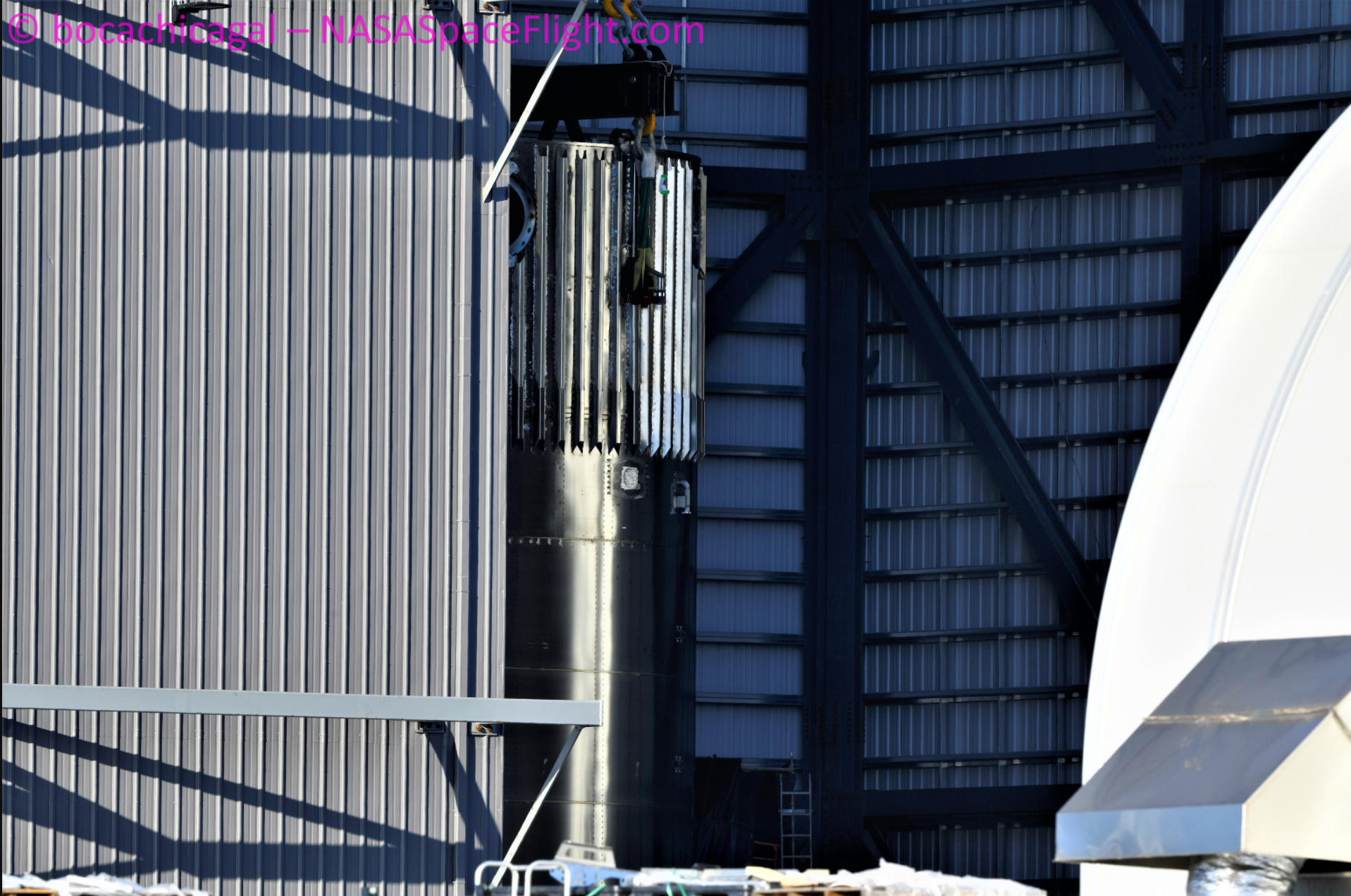 Booster 5 in the High Bay via Mary (@bocachicagal) for NSF

Its grid fins have already arrived and are being prepared for installation. This process took place after the Booster completed stacking operations during Booster 4’s High Bay processing flow.

Ship 21 is making good progress around the Production Area, with sections being prepared for stacking, a process that will take place inside the since-vacated Mid Bay. The rollout of GSE-8 to the Tank Farm has created room for Ship 21’s stacking to occur.

With numerous sections sporting a full coat of TPS, the nosecone for Ship 21 is already following that same path, with tiles being applied inside one of the “Big Tents.”

Sections for Ship 22 have also been observed, with the Common Dome Section spotted inside Tent 1.

Meanwhile, the Thrust Pucks for boosters down the pecking order have also been arriving into Starbase, including the first to host the expanded capability of 33 Raptors.

They are like works of art. I would not be opposed to having that on my wall!https://t.co/APLl78EwQN https://t.co/sRT2usanag pic.twitter.com/jRs7fZriEy

All these Raptor engines arrive at Starbase after having been processed at SpaceX’s McGregor test site.

Currently, the engines are assembled at SpaceX HQ in Hawthorne, California, before taking a road trip to Texas for hot-fire testing on one of five available test stands. 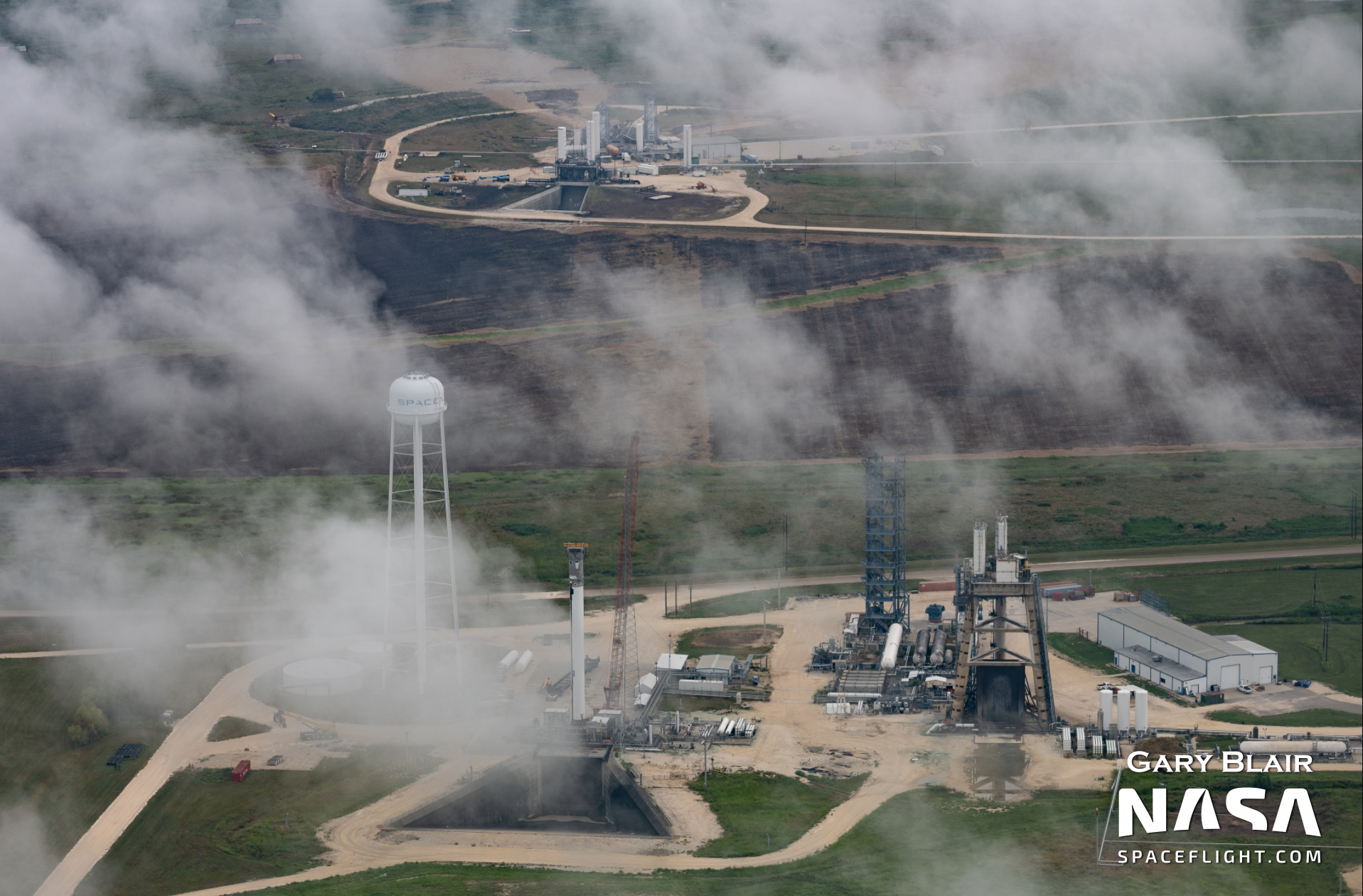 Elon Musk had already noted that Raptor production would increase, aided by a new factory at the McGregor facility, allowing Hawthorne to focus on RVacs and new design evolutions for the Methalox powerhouse.

This allows McGregor to produce the main stock of Raptor 2 engines to cater for a large number of Boosters and Starships, each requiring 36 Raptor 2s in total, based on the 33 on the Booster and three on the Starship (along with three RVacs).

With groundwork observed by Gary Blair over recent weeks (via his plane passes for NSF/L2), the latest pass noted the framework of the factory is now being assembled. 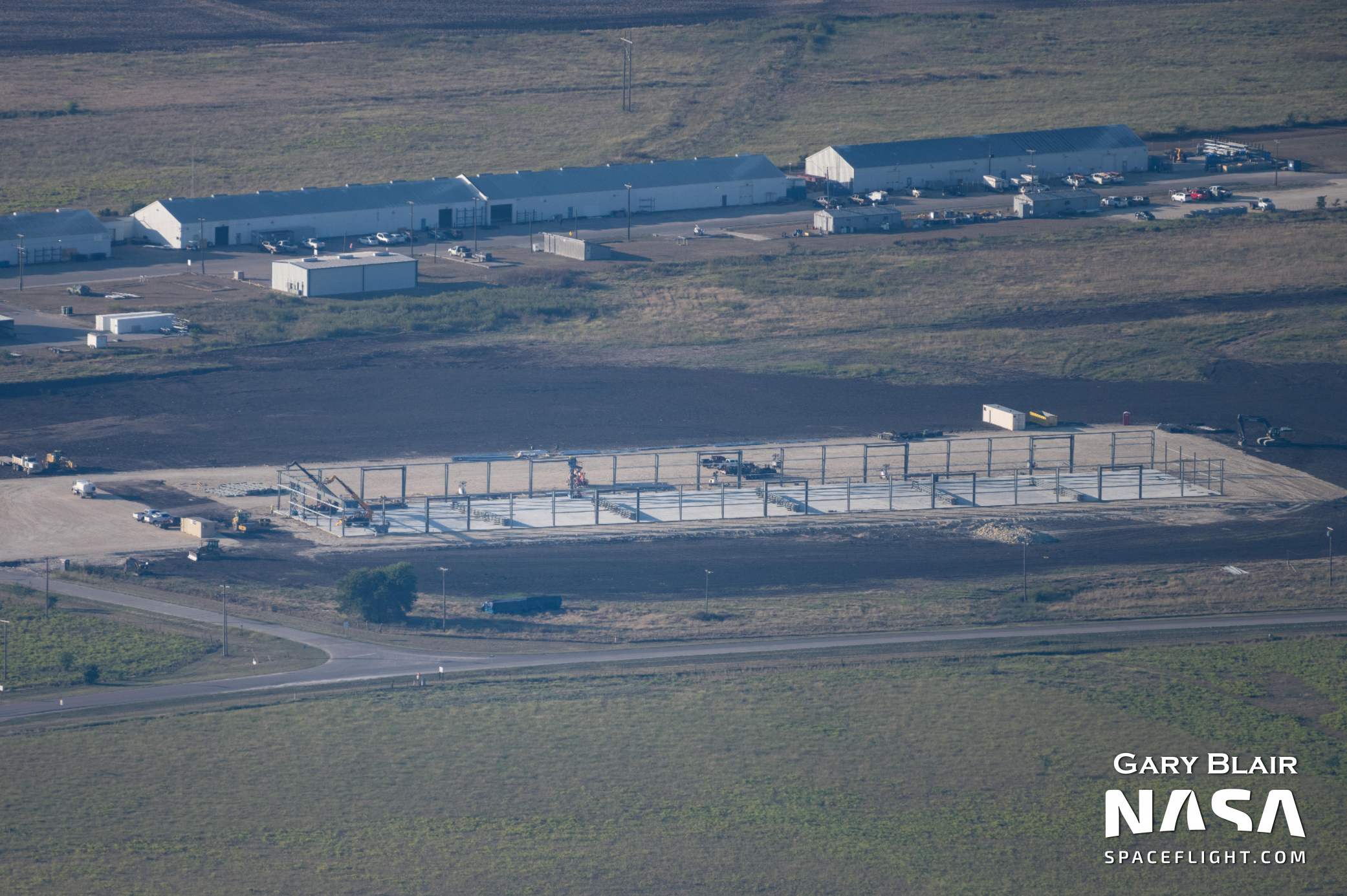 While this factory will still be some time away from assembling Raptor 2s, Hawthorne is already building the streamlined version of the Raptor, with the McGregor test stands being worked on in preparation for test firings.

Centralizing Raptor production and testing at McGregor will also streamline the flow of Raptors to Starbase, removing the California-to-Texas leg for all engines except for the RVacs.

Also, this production increase provided a fascinating scenario of how many Raptors SpaceX will require in circulation, given the full reusability of the Starship system. A large stock of Raptors points to a huge fleet of vehicles, as Musk has always envisioned.