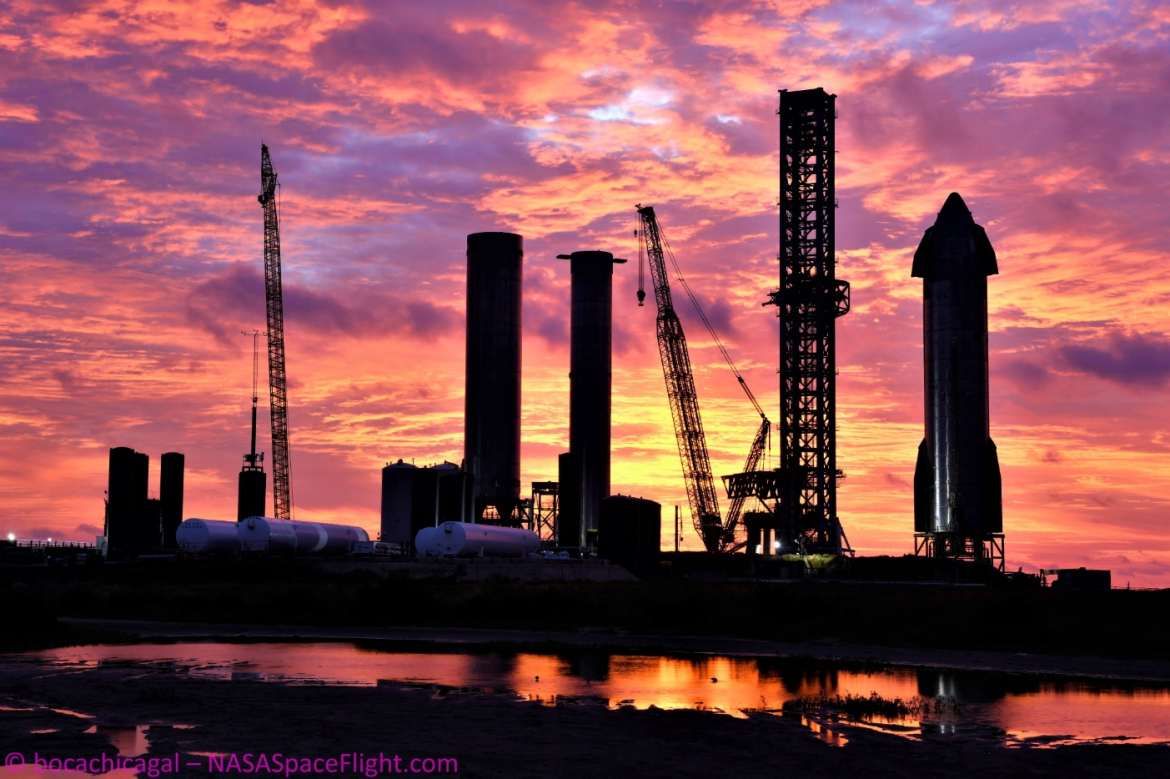 With the maiden orbital flight of Starship approaching, Orbital Launch Pad A in Starbase, Texas, is being built up to launch readiness. Over a year of construction has brought the complex’s various elements to the verge of launching the most powerful rocket in history.

SpaceX started construction of the orbital launch pad on June 22, 2020, when teams began to install the concrete rebar for the six pillars of the orbital launch mount. After building up steel rebar for reinforcement, a steel cylinder was sleeved over the rebar and each pillar was filled with concrete, covered, then left to cure.

Once the pillars were completed, there wasn’t much progress on the Orbital Launch Pad (OLP) as the focus shifted to flying the SN8 and SN9 vehicles. While the testing campaigns of SN9, SN10, and SN11 were taking place, SpaceX started working on the OLP again by beginning to lay the foundations for the tank farm and the associated GSE bunkers. Teams also began the installation of piping for the tank farm.

An important milestone was reached on April 5, 2021, when GSE tank 1 was rolled out and then lifted onto its mount in the tank farm 3 days later.

Then, during SN15’s test campaign, the construction work at the OLP stepped up, because SpaceX was reaching a point in the program where they needed to test the entire stack and not just the ship. During this surge, GSE 2 was rolled out on April 19 and lifted onto its place in the tank farm.

On this same day, along with starting to install the GSE tanks, the foundation for the Integration tower was built and the first steel pillar of the tower was added to the foundation. Lastly, the dirt berm between the landing pad and the tank farm was being constructed before SN15 made its historic flight.

After SN15 was recovered and moved back to the build site, SpaceX moved the pace up another gear and began rapidly building the OLP. Construction of the catching arms and the Quick Disconnect arm began on the landing pad.

SpaceX rented the LR11350 named “Franken Crane” (FC) by employees because of its mismatched color parts. This crane was then used to stack the Integration Tower using prefabricated truss sections built at the propellant production site. The first prefabricated section was lifted onto the tower on May 24.

While the tower was being stacked, the first two pillar extensions were installed on May 31, and support beams were installed shortly after on the orbital launch mount foundations in preparation to receive the launch table. On May 29, the first cryo shell rolled out to the launch pad. This shell was built to be the water tank for the water suppression system. A GSE tank would not get sleeved until August 5, when Shell 1 was sleeved over GSE 5.

Another big milestone in construction was achieved when the roof section of the Integration tower was installed on July 28.

On July 31, once the tower was fully stacked, FC in conjunction with the LR11000 otherwise known as “Bucky” did a tandem lift of the Orbital Launch Table onto the launch mount, and teams welded it into position. The rollout and mounting of the launch table came after several months of work at the build site.

Then, just three days after the installation of the launch table, SpaceX rolled out B4 and then 2 days later S20 for fit checks with the launch table and the booster interstage. After the fit checks were completed, B4 was then taken off the OLP and rolled back to the build site to be completed. 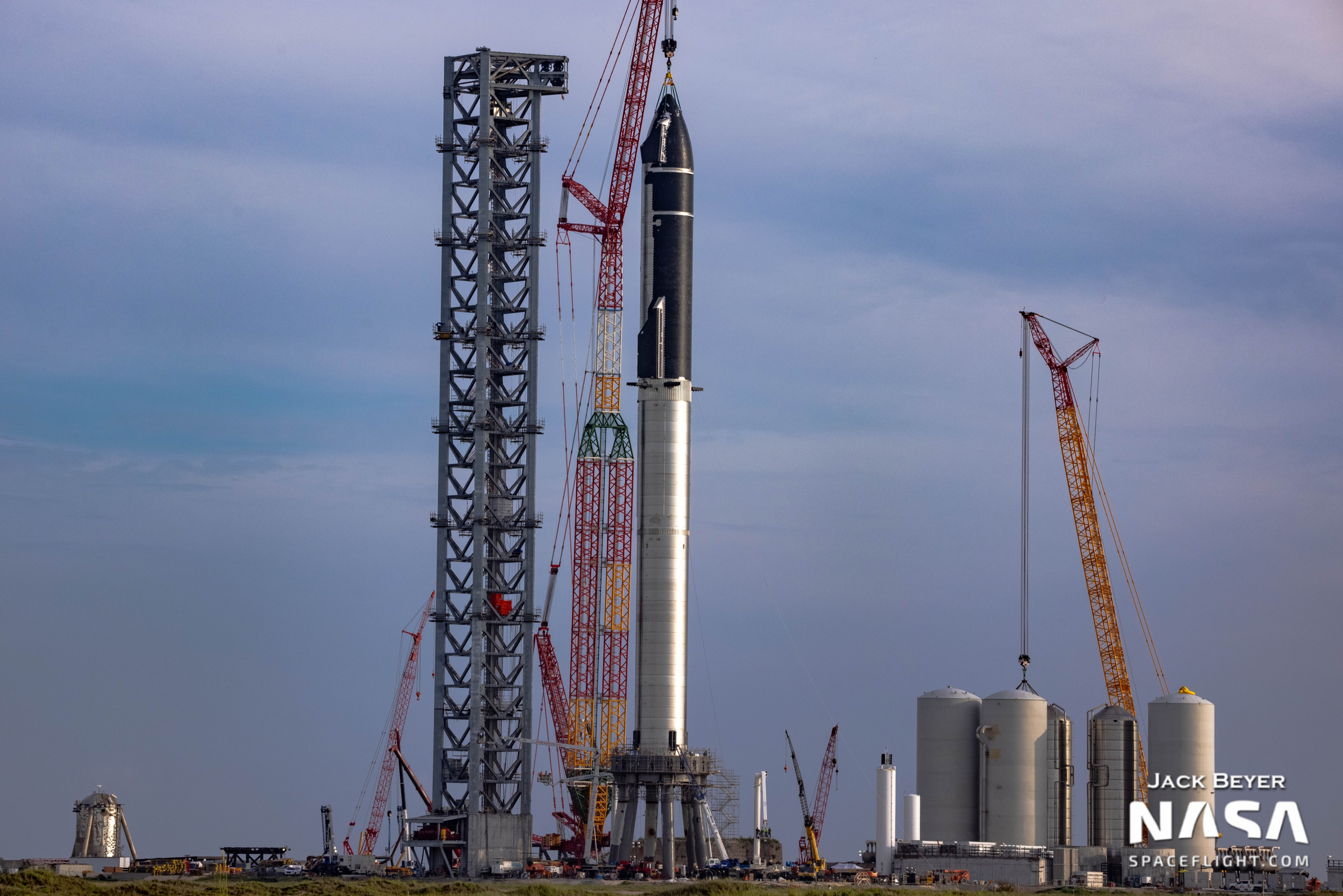 SpaceX then continued work on the OLP by starting to add piping and conduit to the integration tower, the orbital pad, and between the tank farm and the orbital pad. While installing all of the required piping, the quick disconnect for the booster was installed on the launch table on August 26, and the QD arm was installed on the Integration tower on August 29. On September 22, SpaceX cryo tested GSE 5 on the tank farm.

After months of construction and speculation of how Mechazilla will work, we saw the catching system set up for installation. On October 6, FC lifted the Carriage onto the tooling that was constructed in order to assemble the entire system on the ground before installation onto the tower. On October 9, the first arm was lifted into place by FC, then Bucky lifted the second arm two days later.

LOX was first seen loaded into the tank farm on October 17. The final Cryo shell was sleeved over GSE 2 on October 19, thus completing all the GSE tanks and shells. The Catching system was finally installed onto the integration tower on October 20. 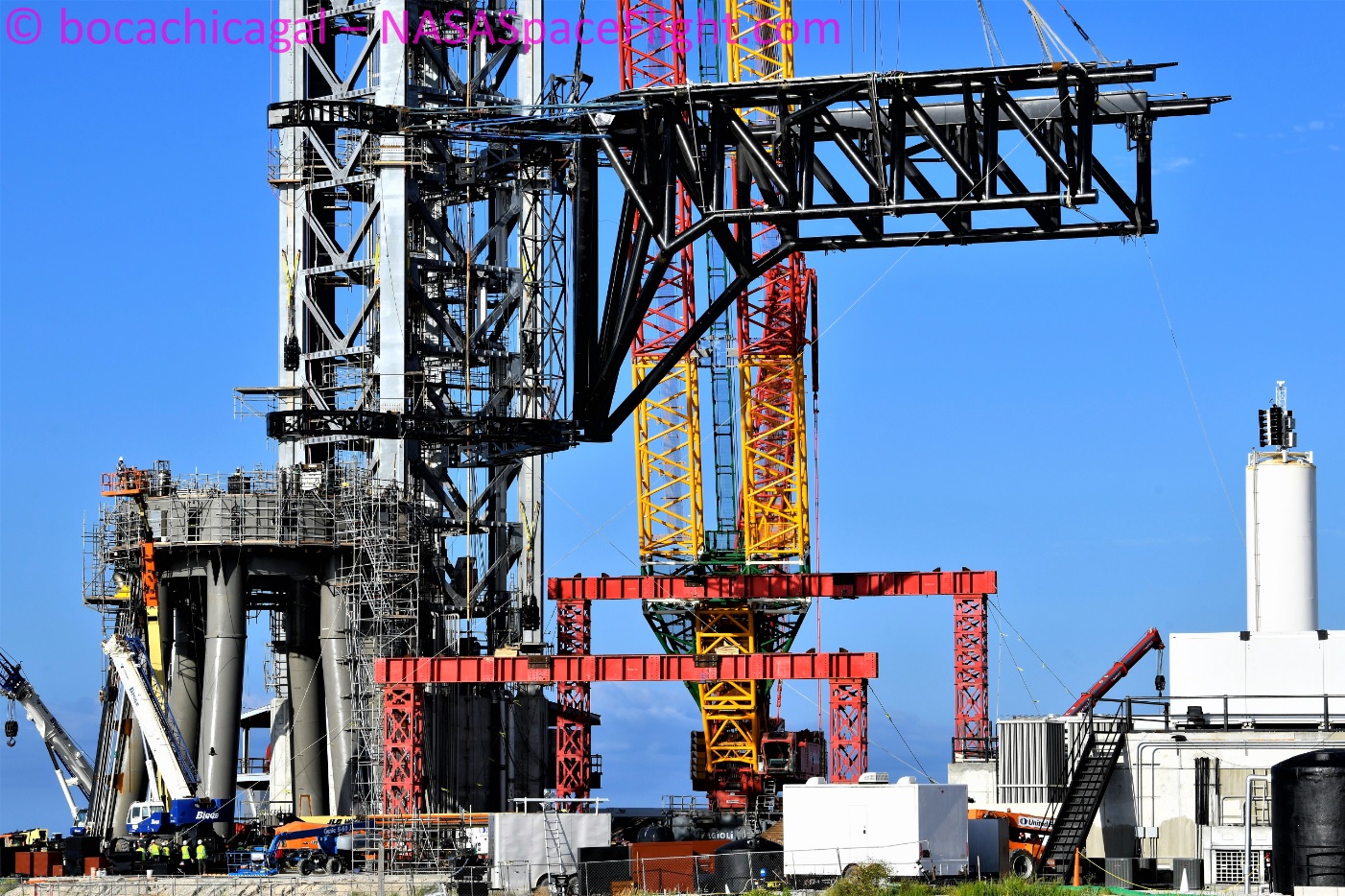 The tank farm consists of one water tank and seven tanks for other commodities. There are three LOX (Liquid Oxygen) tanks, two CH4 (Liquid Methane) tanks, and two LN2 (Liquid Nitrogen) tanks. There are also two horizontal CH4 tanks to the side of the main tank farm; their exact size is not known.

The water tank is just a large cylinder made up of rings of stainless steel. The other seven tanks are double-walled with insulation between them since they need to hold liquids at cryogenic temperatures. The inner tanks are built nearly the same way SpaceX makes their 9-meter diameter ship and booster tanks using rolls of 304L Stainless steel. These tanks need to be able to withstand constant pressurization and depressurization over their lifespan, so they have extra reinforcement.

The outer shells, which are 12 meters wide, are made up of stainless steel rings and painted white for thermal and corrosion protection. In order to insulate the inner tanks and keep the cryogenic liquids at just below boiling point, the space between the tank and shell is filled with Perlite insulation. Perlite insulation is an inorganic material that has fantastic thermal properties and does not support combustion. 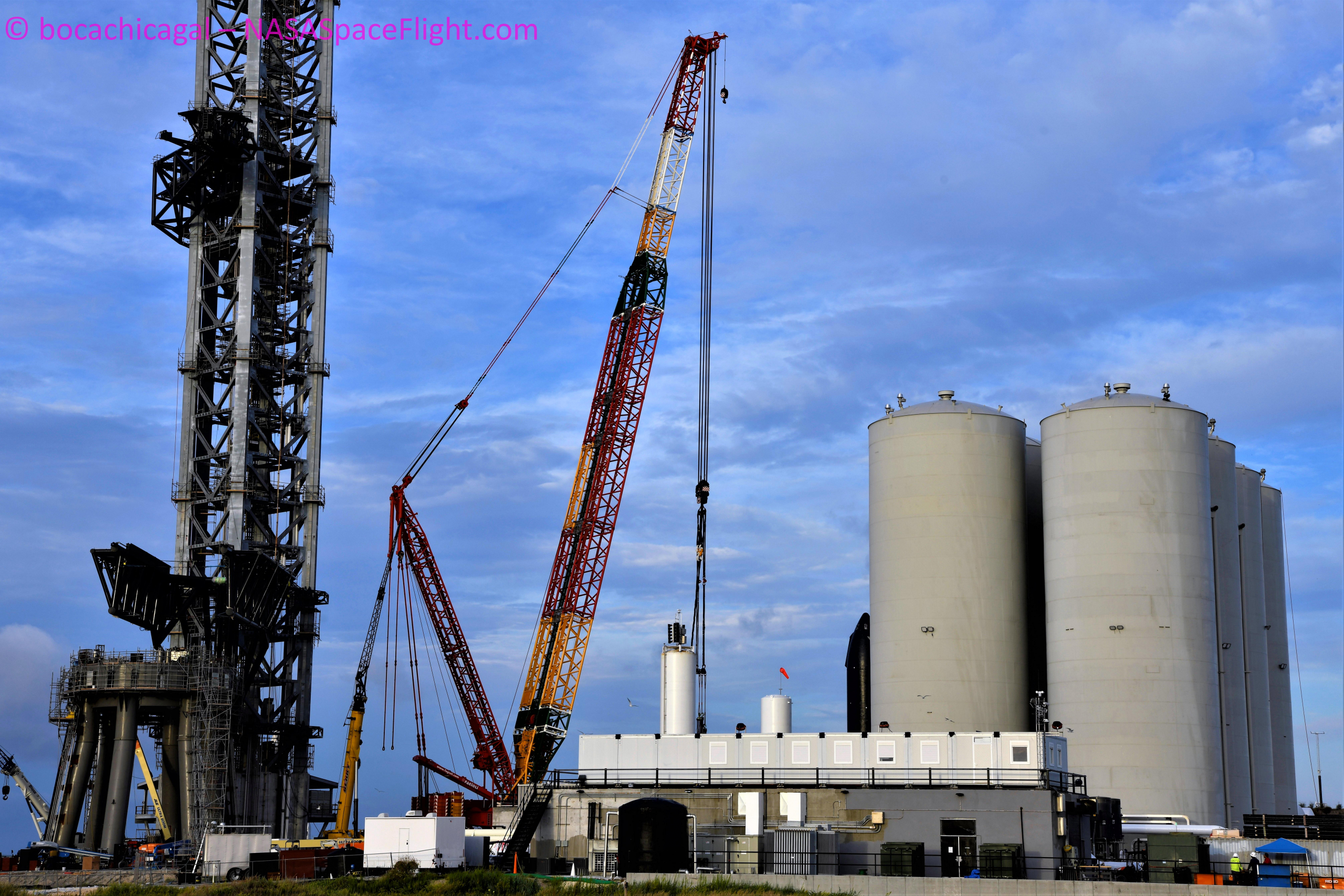 (The following numbers are approximate calculations based on observations and current knowledge of how the tanks are built.)

The launch mount is where the full Starship stack will sit prior to launch. It must be able to withstand at least 74.4 MN of thrust (based on the 33 Raptor 2 engine booster configuration). The mount includes important components such as the hold-down clamps, the quick disconnect for the booster, and the water deluge system for sound suppression. 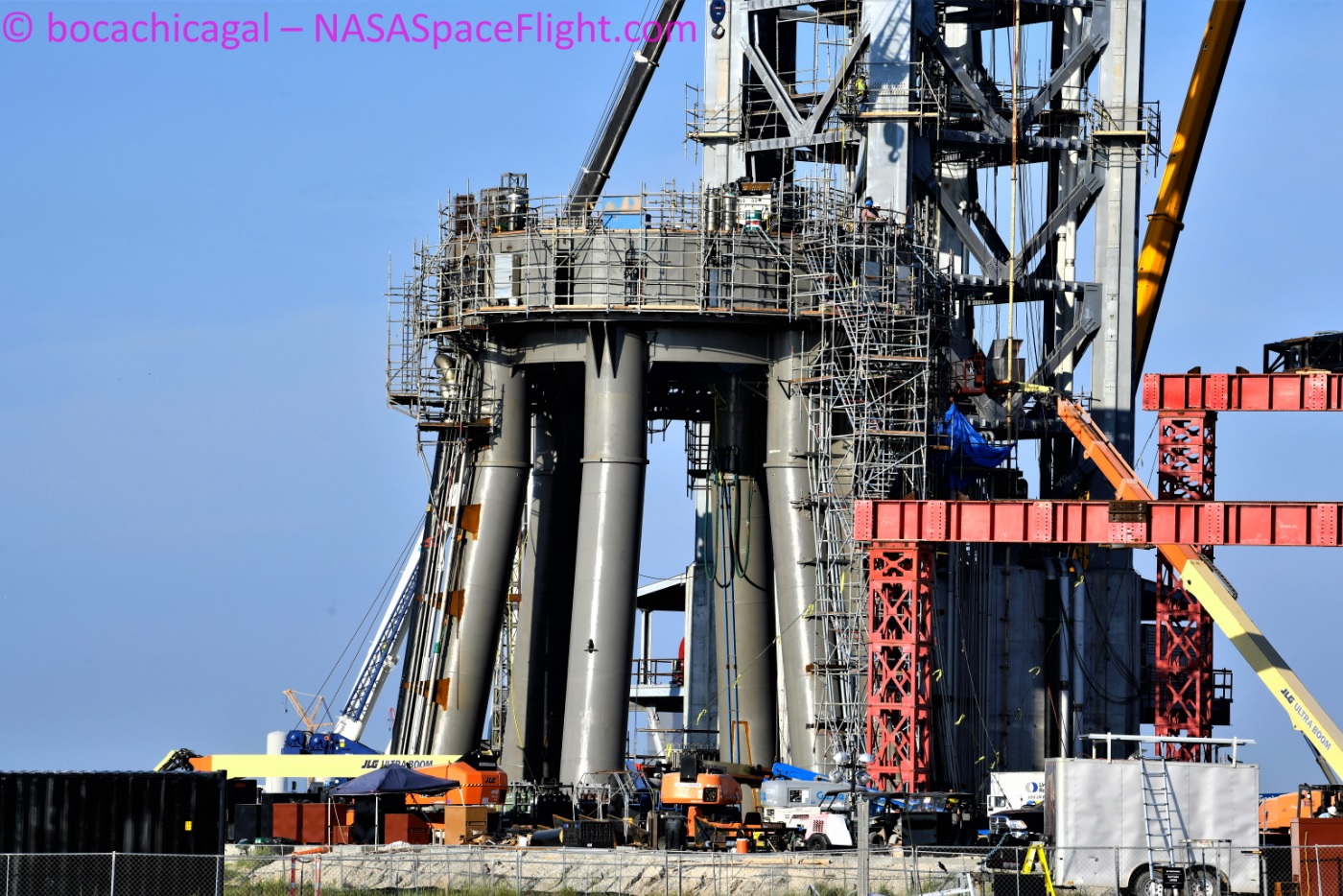 The Orbital Launch Mount – via Mary (@bocachicagal) for NSF

In order to fuel the booster prior to liftoff, the launch table needs a quick disconnect mount, which is on the top of the table and will disconnect from the booster around T-0. The QD will help provide the booster with CH4, LOX, and Helium, as well as supply external power prior to launch.

The water deluge system will spray water onto the bottom of the launch mount and on the ground to help lessen the sound waves of 29 and eventually 33 raptors firing at full thrust so that the sound waves do not damage the rocket or the pad.

The integration tower is going to have a unique piece of hardware. Mechazilla, as named by Elon Musk, should be 145 meters tall when completed and will have the job of not only stacking the booster and Starship but also catching them as they come in for landings. Mechazilla will do this using two arms which will lift/catch the booster from hardpoints that are between the grid fins, and the Starship will be lifted/caught from hardpoints right under the forward flaps.

The first booster catch attempt is not expected before the flight of Booster 5 at the earliest. Starship catches have also been proposed, although whether this will actually be attempted is less definite.

The arms attach to a carriage that connects to the tower on the column just under the pulley at the top of the tower and wraps around to the two side columns for extra support. In order to be able to move up and down the tower easily, there are bearing skates that the carriage attaches to on the sides of each column on the top and bottom. 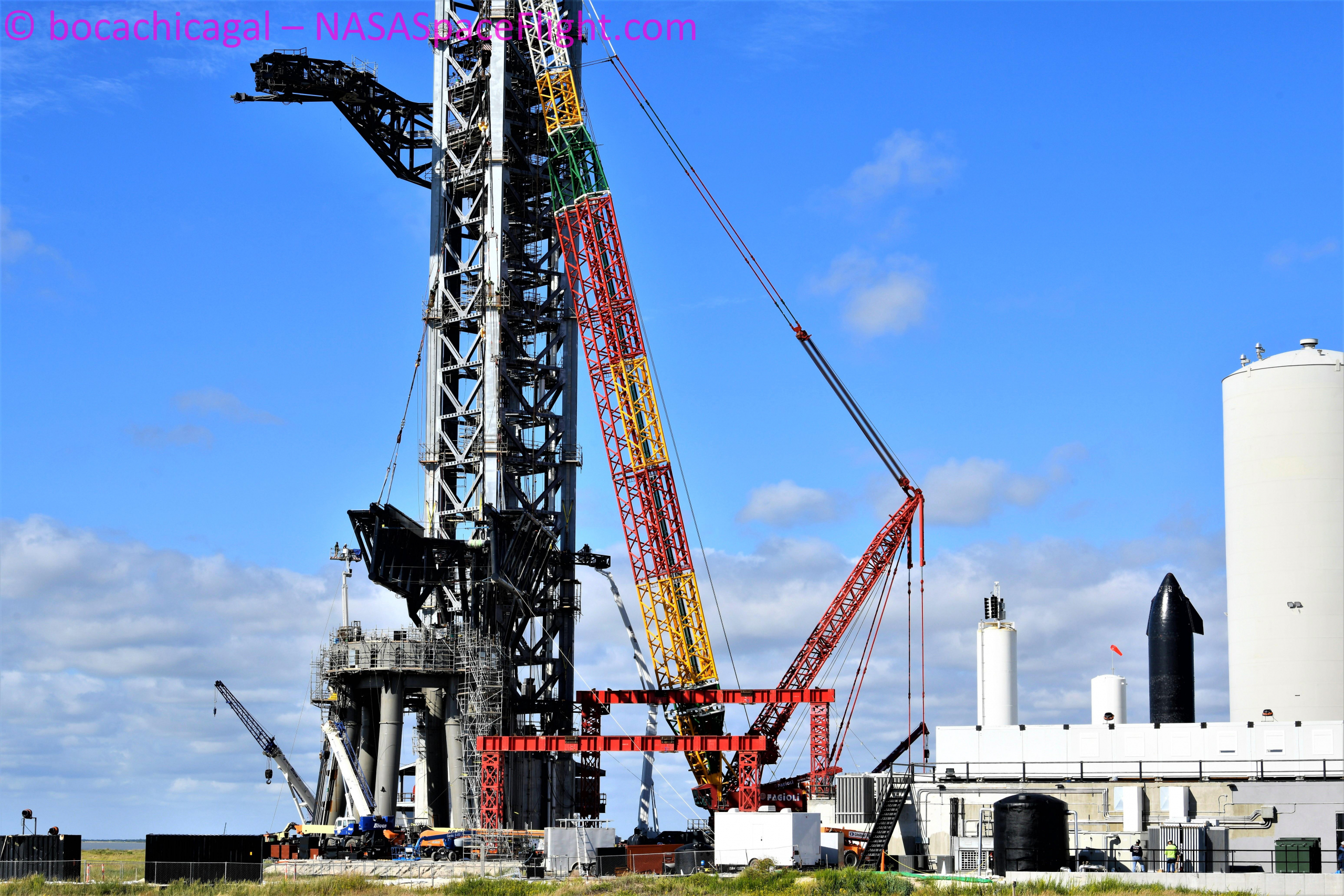 In order to make sure that the tower places the booster and ship in the correct position, the catching arms will have tracks on the top so that the vehicle can be translated into the right position.

The QD arm, much like the booster QD, will supply the ship with CH4, LOX, Helium, and external power prior to launch. The QD arm has a single actuation point, which is connected to the tower and allows the arm to move during launch and catch operations. The extension has a claw setup similar to the top of the Falcon 9 strongback. This claw setup will hook up to the booster for stabilization.

Work remains to complete the OLP to a level suitable for launch operations, but the major elements are in place to support a maiden orbital flight of Starship within the next year or so, pending vehicle readiness and regulatory approvals.

Assistance for this article was provided by the NSF (L2 Level) Discord.

Ariane 6 undergoing preparations for its 2022 debut