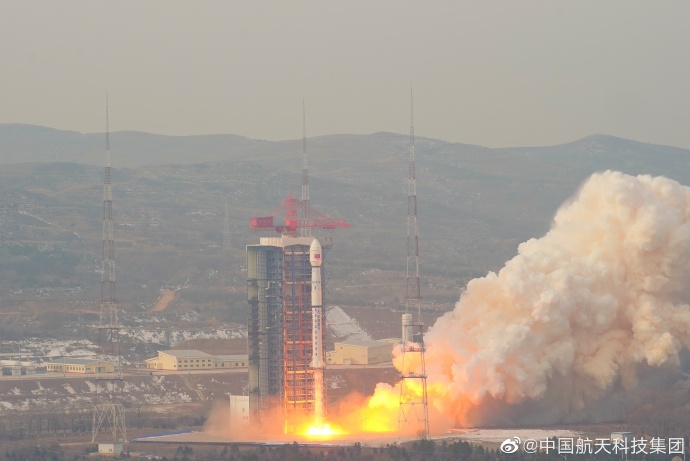 Keeping up a rapid pace of launches this year, China deployed the Gaofen 11-03 satellite Saturday using its Chang Zheng 4B rocket. The launch took place from the Taiyuan Satellite Launch Center at 01:51 UTC (09:51 Beijing Time) and marks China’s forty-fourth orbital mission of 2021.

Gaofen 11-03 is the third in a series of high-resolution optical imaging Gaofen 11 satellites, part of the wider Gaofen series which aims to provide China with a global high-definition Earth-imaging capability for civil applications. Gaofen means “high resolution,” and the Gaofen constellation is unrelated to the smaller commercial Jilin-1 Gaofen satellites.

China launched the first member of the Gaofen constellation, Gaofen 1, in April 2013. Subsequent launches have added a multitude of capabilities to the system, including high-resolution optical, multispectral and hyperspectral and radar imaging. Gaofen is operated by the state-owned China Aerospace Science and Technology Corporation (CASC) and provides data to support a varied array of applications, including disaster management and prevention, agriculture, and urban planning.

The full capabilities of the Gaofen 11 spacecraft have not been published. However, the satellites are believed to form part of the constellation’s optical high-resolution component. The first such satellite, Gaofen 11-01, was launched in July 2016. This was followed by Gaofen 11-02 in September 2020.

The Gaofen 11 satellites operate in sun-synchronous orbits, with a perigee of approximately 450 kilometers, an apogee of around 690 kilometers, and an inclination of 97.4 degrees.

Saturday’s launch saw Gaofen 11-03 lift off from the Taiyuan Satellite Launch Center atop a Chang Zheng 4B (CZ-4B) carrier rocket. Also known as the Long March 4B, the CZ-4B is part of China’s legacy Chang Zheng family of rockets, derived from the Dongfeng 5 missile. This family includes the Chang Zheng 2, 3, and 4 vehicles. It does not include the earlier Chang Zheng 1, which was based on the Dongfeng 3 missile.

As derivatives of China’s missile programs, the Chang Zheng rockets use storable hypergolic propellants: unsymmetrical dimethylhydrazine and dinitrogen tetroxide. While this propellant combination suited early missiles – allowing them to be kept fully-fueled for extended periods of time and to ignite their engines reliably without an external source of ignition – it is also highly toxic and less efficient than other propellants.

The Chang Zheng 2 rockets – with active variants including the 2C, 2D, and 2F – are primarily used for low Earth orbit launches in two-stage configurations, although they can also fly with small upper stages. The Chang Zheng 2F is used to launch crewed missions of the Shenzhou program. Three versions of the Chang Zheng 3 – the 3A, 3B and 3C – are currently in service and are mostly used for geostationary launches. These add a high-energy upper stage burning liquid hydrogen and liquid oxygen to enable the rocket to reach higher orbits.

Chang Zheng 4 (CZ-4) was conceived as a backup to the Chang Zheng 3 in the event of complications with the development of its hydrogen-powered upper stage. Chang Zheng 4 would use a storable-propellant stage instead, offering lower performance but viable as an interim should it be needed. It was never needed for this purpose, with the CZ-3 successfully reaching geostationary transfer orbit at its second attempt in April 1984.

The CZ-4 was later revisited as China looked for a way to place heavier payloads into low Earth orbit, and particularly sun-synchronous orbit. The type’s first flights came in 1988 and 1990 in the form of two Chang Zheng 4A rockets that were used to deploy Fengyun weather satellites. The next launch would not come until 1999, when the Chang Zheng 4B made its debut, incorporating a small stretch to the first stage. 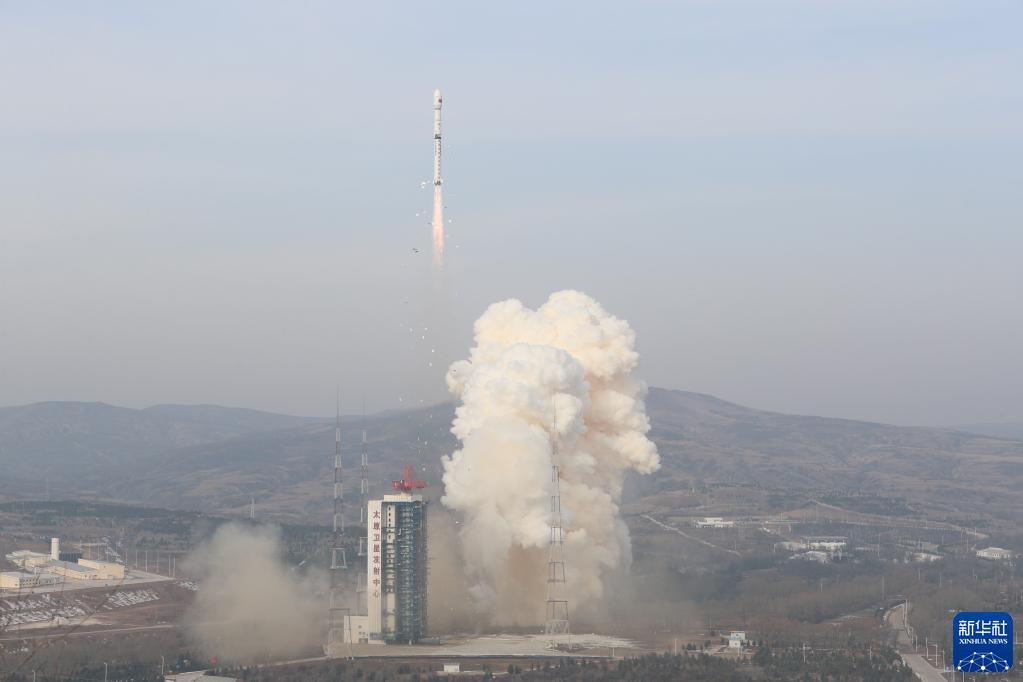 The Chang Zheng 4B remains in service alongside the Chang Zheng 4C, a variant introduced in 2006 with a modified third stage. The CZ-4B can only fire its upper stage engines once, whereas the CZ-4C’s upper stage can be restarted to make multiple burns. This allows it to deploy heavier payloads via two-burn insertion profiles, or carry out more complex missions.

The first stage of the Chang Zheng 4B was powered by a YF-21B propulsion module, consisting of four YF-20B engines. This propelled the rocket away from the launch pad, providing the initial thrust to climb through the lower and denser regions of Earth’s atmosphere. Once the first stage depleted its propellant, it separated, and the second stage took over. This was powered by a YF-24B propulsion module, with a single YF-22B engine – a vacuum-optimized version of the YF-20 – and a four-chamber YF-23B vernier motor for attitude control.

The third stage, which completed the ascent and injected the Gaofen 11-03 satellite into sun-synchronous orbit, used a pair of YF-40 engines.

Although Chang Zheng 4B and 4C rockets have also launched from the Jiuquan Satellite Launch Center, and a single 4C has been launched from Xichang, the majority of Chang Zheng 4 series launches have taken place from the Taiyuan Satellite Launch Center, which was also the point of departure for Saturday’s mission. Located in China’s northern Shanxi Province, most orbital launches from Taiyuan target sun-synchronous low Earth orbits. The site is also used for military testing, including suborbital launches. 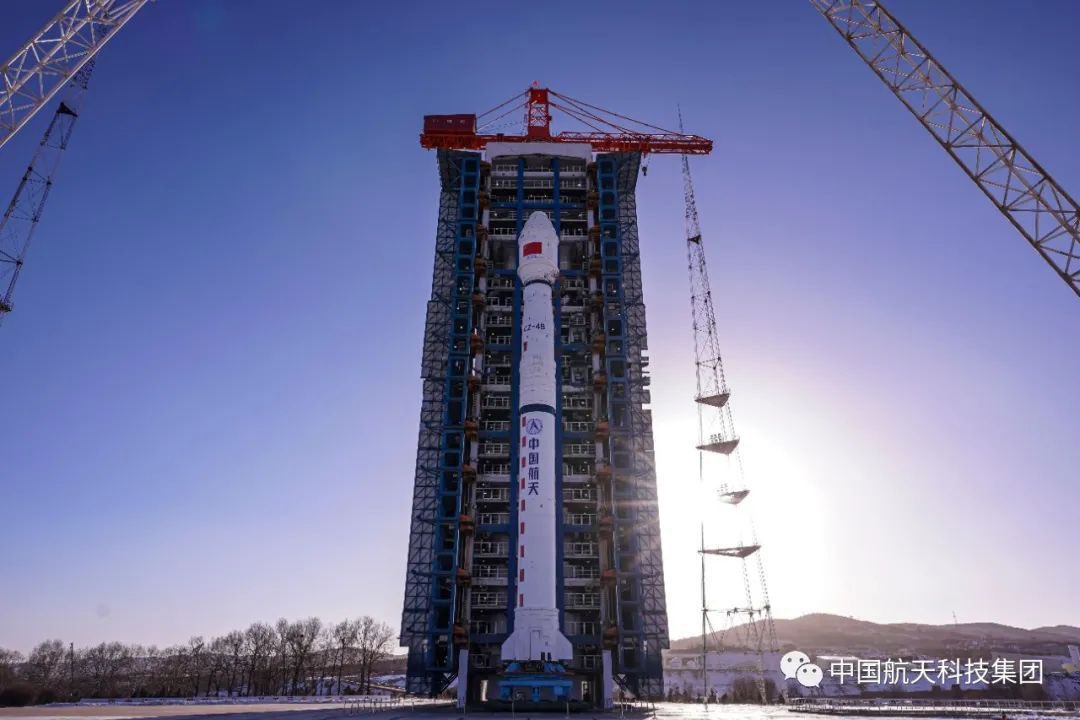 Taiyuan has two launch pads for legacy Chang Zheng rockets: Pad 7 was used for orbital launches from 1988 until 2009. It was replaced by Pad 9, which entered service in 2008 and is now used for all orbital CZ-2 and CZ-4 flights from Taiyuan including Saturday’s launch. Pad 7 continues to be used for suborbital Chang Zheng 2C launches in support of military projects. A third complex, Pad 16, is used by the Chang Zheng 6 rocket, part of a new series of vehicles China is developing to replace the older members of the Chang Zheng family.

With the Gaofen launch, China has now attempted forty-four orbital launches so far in 2021, with six weeks remaining in the year. This has already surpassed the most launches that China had previously made in a calendar year – tied at 39 in 2018 and 2020 – and looks likely to grow further. A Chang Zheng 2C or 2D launch out of Jiuquan is expected as early as Sunday night UTC (Monday local time), with an unconfirmed Chang Zheng 3B launch from Xichang potentially following around the middle of the week.

Unfolding the universe: the commissioning process of the James Webb Space Telescope